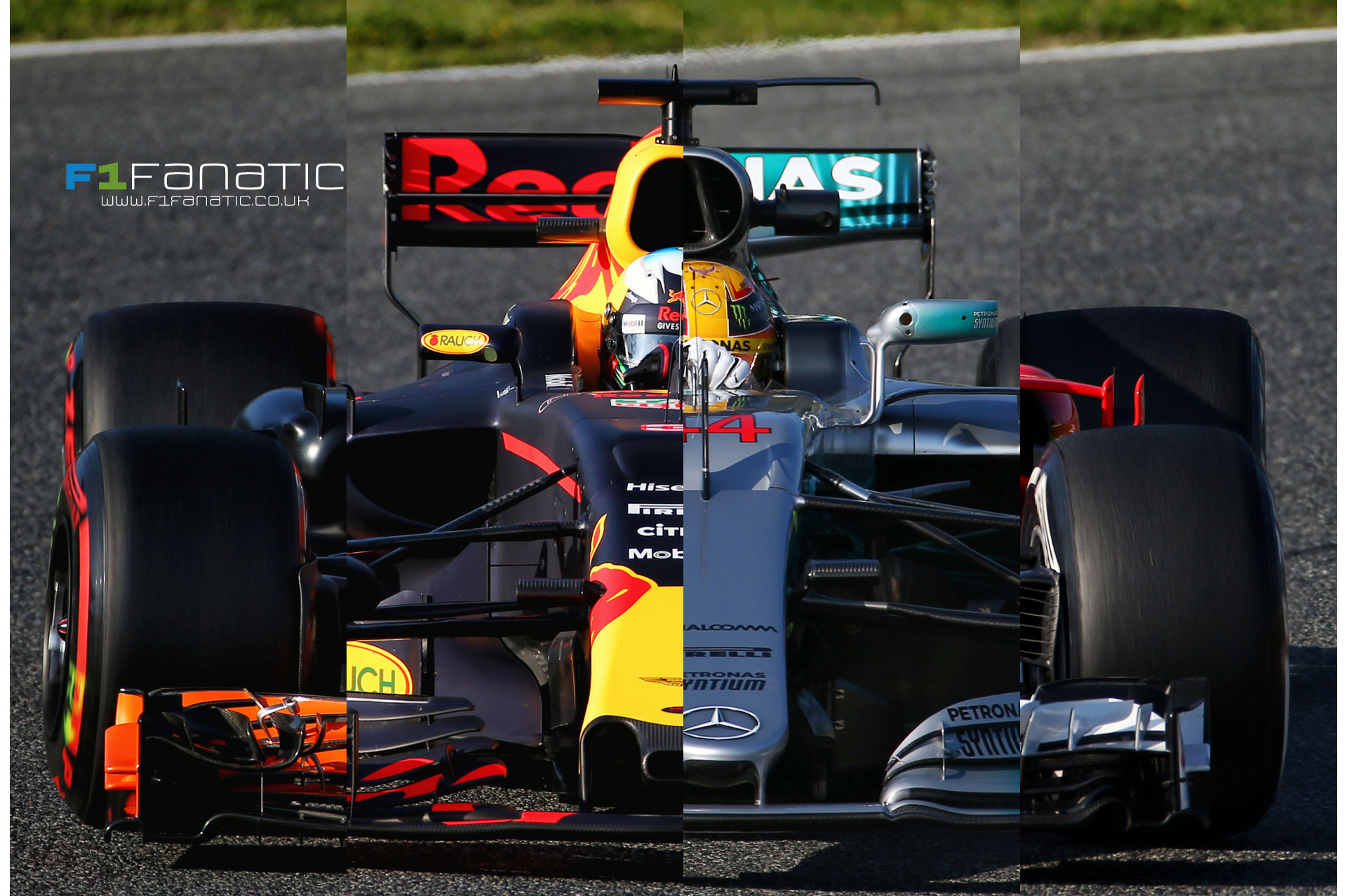 We’re only one week away from seeing how the Formula One field of 2017 stack up against each other at the first race weekend of the year.

How have the teams tackled the rules overhaul for 2017? What different design philosophies have they adopted?

Take a close look at all ten cars on the grid this year and compare them all from three different angles.

Use the drop-down menus below to select which of the 2017 cars you want to compare and use the sliders to transition between the images. Note some images may have been altered for ease of comparison and should not be used as a reference for measurements. 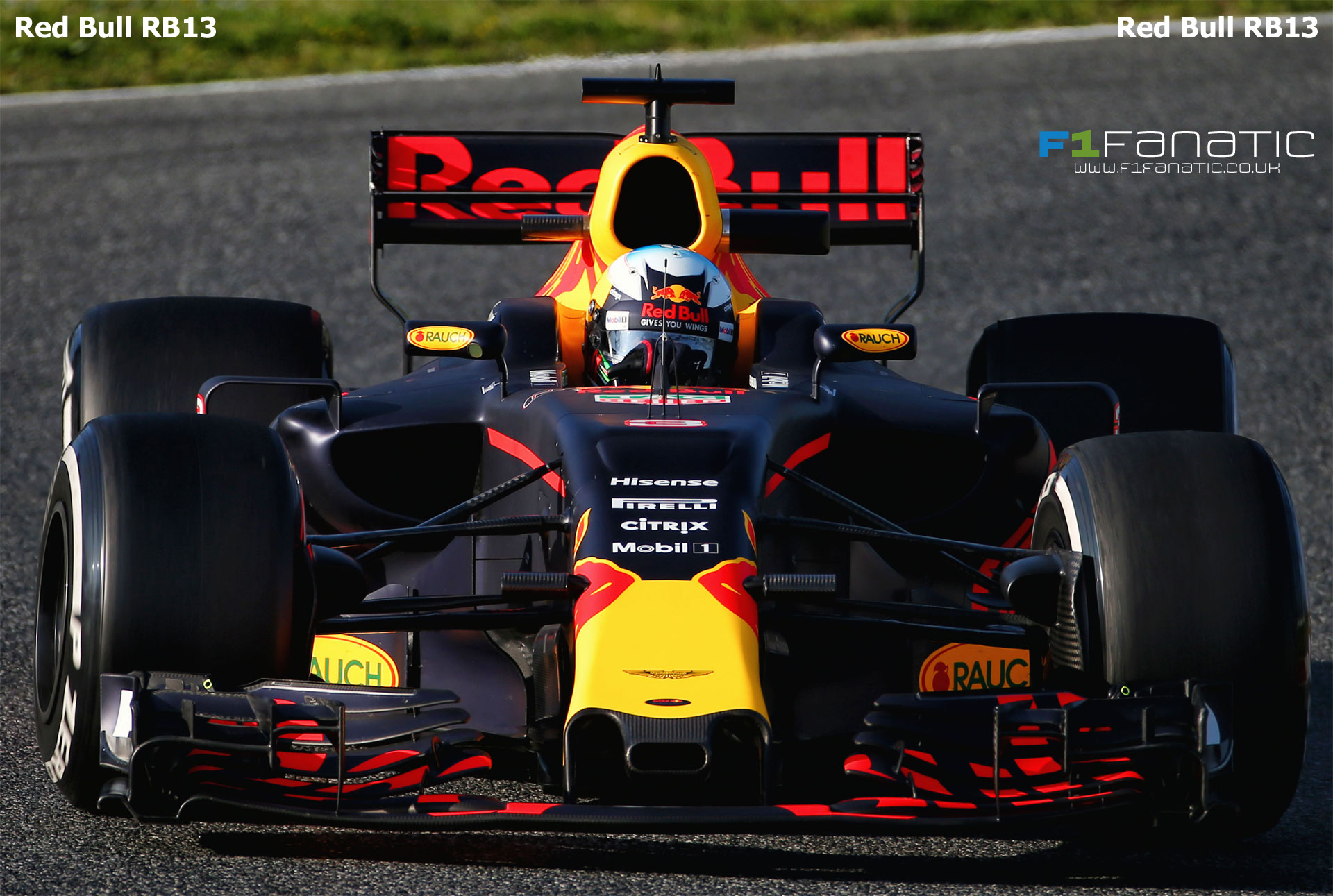 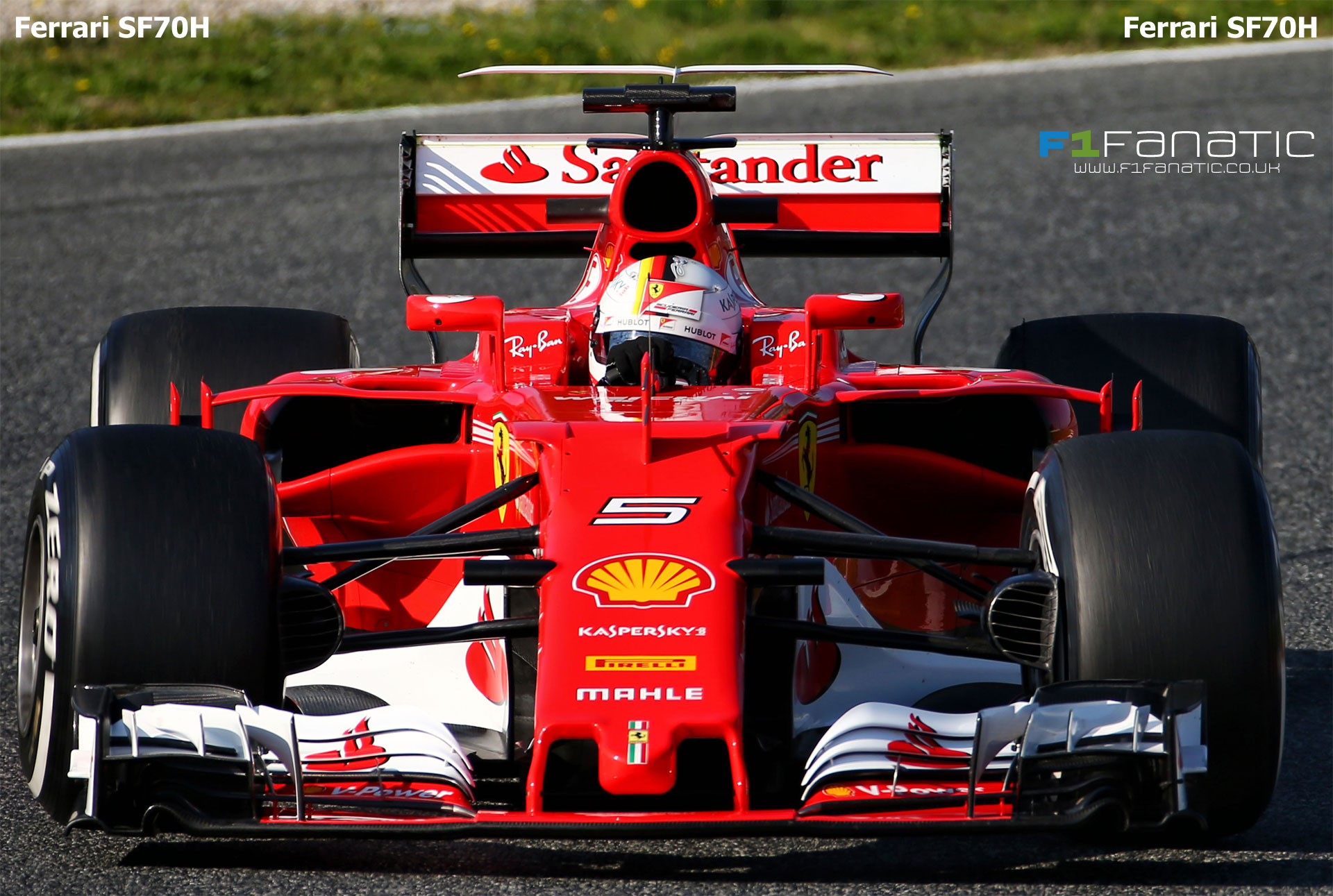 The ‘thumb tip’ noses remain in evidence among most of the teams, with a few notable exceptions. Toro Rosso have joined Mercedes in crafting a slender nose while Force India continue to pursue a unique path. The ‘nostrils’ seen on their 2015 and 2016 cars have now split into a fork-like arrangement.

Red Bull’s vented solution is also novel and has inevitably prompted suspicion it performs some cunning function. The rule book requires it to be used for driver cooling.

A growing number of teams have adopted ‘S-duct’ vents in their noses which exit in line with the front suspension.

Mercedes and Toro Rosso’s similarities go beyond the nose. Their front suspension arrangements are strikingly similar as well, using extension to the top of the wheel mountings to connect the uppermost arm. Developments in this area will be critical to ensure good, consistent contact between the wider front wheels and the track.

This angle also gives a good view of Ferrari’s unusual sidepod arrangement. They are set as far back as possible, mounted high and dramatically undercut. It creates space for them to generate downforce and optimise the airflow in this area of the car.

Every team has run their car with a ‘shark fin’, though they vary in size and shape from Mercedes’ smaller style to Sauber’s curvaceous affair to those of Force India and Williams which appear to have come from LMP1 cars. Four teams have also used these fins to mount additional ‘T-wings’.

This is all in aid of helping the rear wing operate more efficiently. The new rules has forced it lower meaning it sits in less clean airflow than last year. Clearly the designers are exploring every option to improves its performance.

With one significant exception the big teams have seized on the area in front of the side pods to sculpt the airflow as effectively as possible. Ferrari have inserted substantial structures to harness the new downforce-generating possibilities offered by the rules. As last year Mercedes appear to be divided their surfaces into as many smaller elements as possible in search of greater performance.

But development in this area is conspicuous by its absence on the Red Bull. Will the RB13 still be this uncluttered in a week’s time, or will a very different-looking car pull out of their garage when first practice begins at Melbourne?

These images also show how teams have followed Red Bull’s lead in using the rake angle to increase downforce. By lowering the height of the front of the car relative to the rear the front wing can be made to work more effectively and a greater volume of air is pushed through the diffuser, to the benefit of both.

The effect of this has been enhanced by the new regulations which have allowed larger front wings and diffusers, plus more elaborate bodywork around the front and centre of the car to divert the air where it is needed. We may not yet have seen just how car teams are willing to push the rake angles on their new cars, but some have admitted concerns over the front wing making contact with bumpy ground and kerbs as it is now running so low. 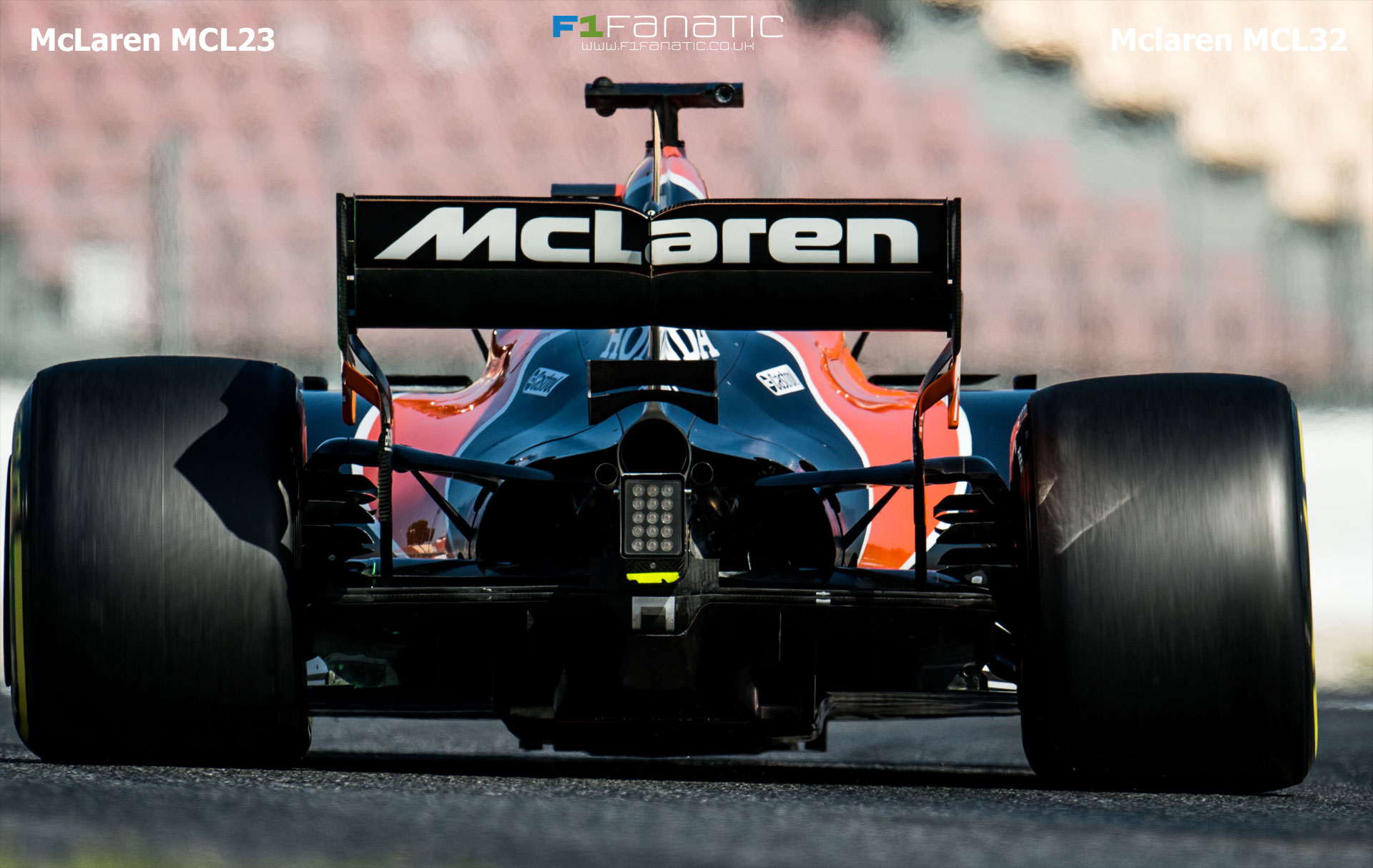 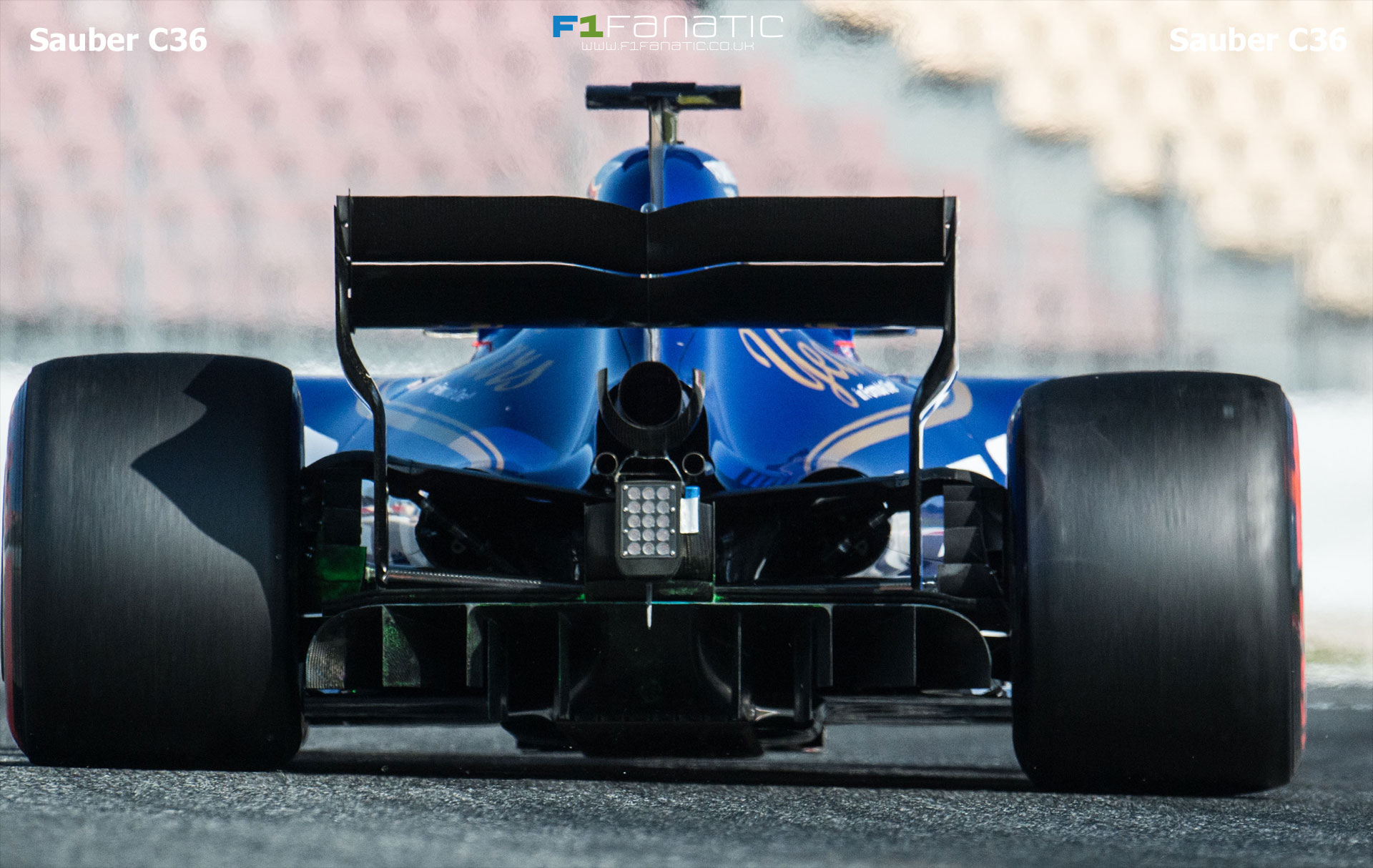 Expect floor upgrades to feature on many cars in the opening races. As this is one of the last downstream parts its airflow does not have a knock-on effect on subsequent parts.

The rear view reveals some striking differences in rear wing angles and configurations between the teams. Some of these may of course be relevant to which set-up they happened to be running when these pictures were taken.

However the overall increase in downforce and drag may make it easier to discern the differences between lower and higher downforce set-ups during the season. For those teams with less powerful engines, smaller wings will be essential at the faster tracks.