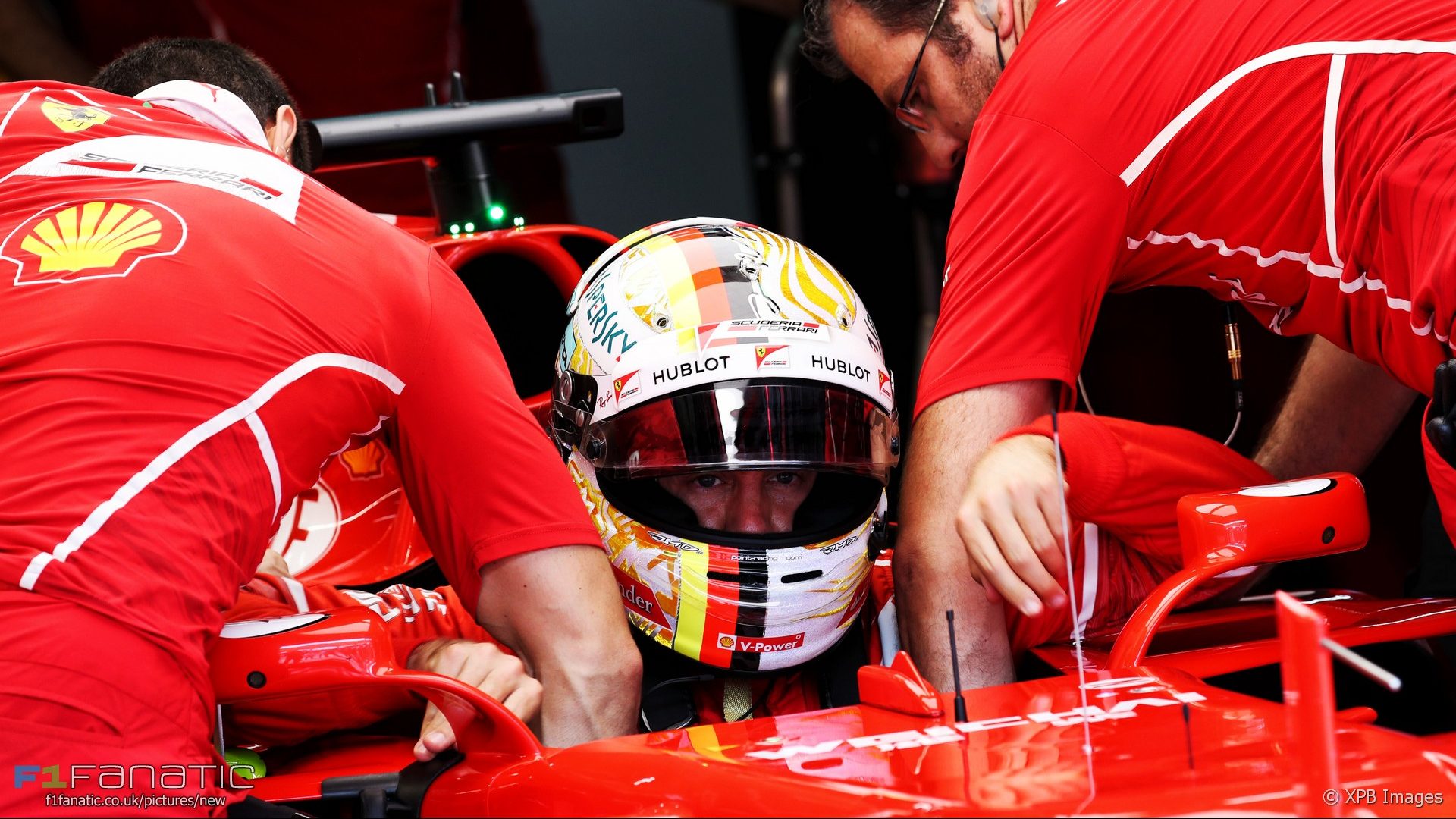 The first sign Sebastian Vettel’s weekend was about to go badly wrong came when he was told to stop his car late in final practice.

He got his Ferrari back to the garage but despite his team’s best efforts it wasn’t fully working in time for qualifying.

Here’s what he and the other drivers had to say on their radios during final practice and qualifying.

While Vettel hit trouble, Jolyon Palmer hit Max Verstappen. And wasn’t at all pleased about the Red Bull driver’s behaviour at the final corner. Nonetheless the stewards cleared both drivers.

To Gasly: “Synchronise all the gears. Scenario 12 back to torque one.”

Raikkonen: “Yeah we have vibrations on the tyres again.”
“Understood, Kimi.”

To Gasly: “There’s a bit more tailwind on the last corner so let’s have a bit of margin for braking.”

Vettel: “We have now, today as well a couple of time, some piece of plastic stuck to the tyres.”
“Yeah in the garage we saw that.”

Vettel: “OK the gap was horrible.”

Palmer: “[Censored by FOM] brakes went to the floor.”

Grosjean (after spinning off at turn 14): “Can you explain?”
“OK we’re looking into it, that was a big rear lock.”

Stroll: “Padding on the other side broke now. Completely broke.”
“OK box this lap.”
Stroll: “OK.”

To Raikkonen: “Feedback on the start: We can release the clutch much earlier.”

Wehrlein: “I nearly crashed into him in the last corner.”

“Stop the car. Slow down. Come in the garage.”
Vettel: “Which revs do you want?”
“It’s fine what you’re doing.”

Verstappen: “I got a puncture.”

Palmer: “[Censored by FOM] idiot.”
“OK understood we saw that Jo.”
Palmer: “What an idiot.”

Vettel’s weekend took a dire turn within minutes of qualifying starting. Lewis Hamilton went on to take pole position despite some fiddling with his engine settings during Q3.

To Hamilton: “Wind into turn one has increased in strength. So it’ll be tailwind into the last corner.”

Grosjean: “Lots of problem with the front locking.”
“Yep, understood.”

Stroll: “Temps are all over the place on the tyres.”
“OK. Ignore those.”

Vettel: “Yeah I lost drive. Let me know what to do I can limp back.”
“Charge button on.”
Vettel: “That makes it worse.”
“OK stand by.”

“Do you need any change for next run?”
Sainz: “No, not at the moment.”

Grosjean: “Sorry I tried my best.”

Gasly: “Car was good I’m more than happy with the balance. More stability, more balance. Better grip with the warm-up.”

Alonso: “This lap will be a mess. Was better to wait in the garage ten more seconds.”

Stroll: “I had a very bad out-lap with traffic. That’s why my first sector was poor.”

To Vandoorne: “Tyre temperatures are good, same as new.”

To Hamilton: “OK Lewis we need to disable a mode so push hold the RS button for ten seconds.”

Hamilton: “Feels down on power.”
“OK checking. We’re happy with the modes at the moment.”

To Raikkonen: “And we’ll be lap mode push before braking.”

2 comments on ““Feels like I have no turbo”: Malaysian GP qualifying radio highlights”