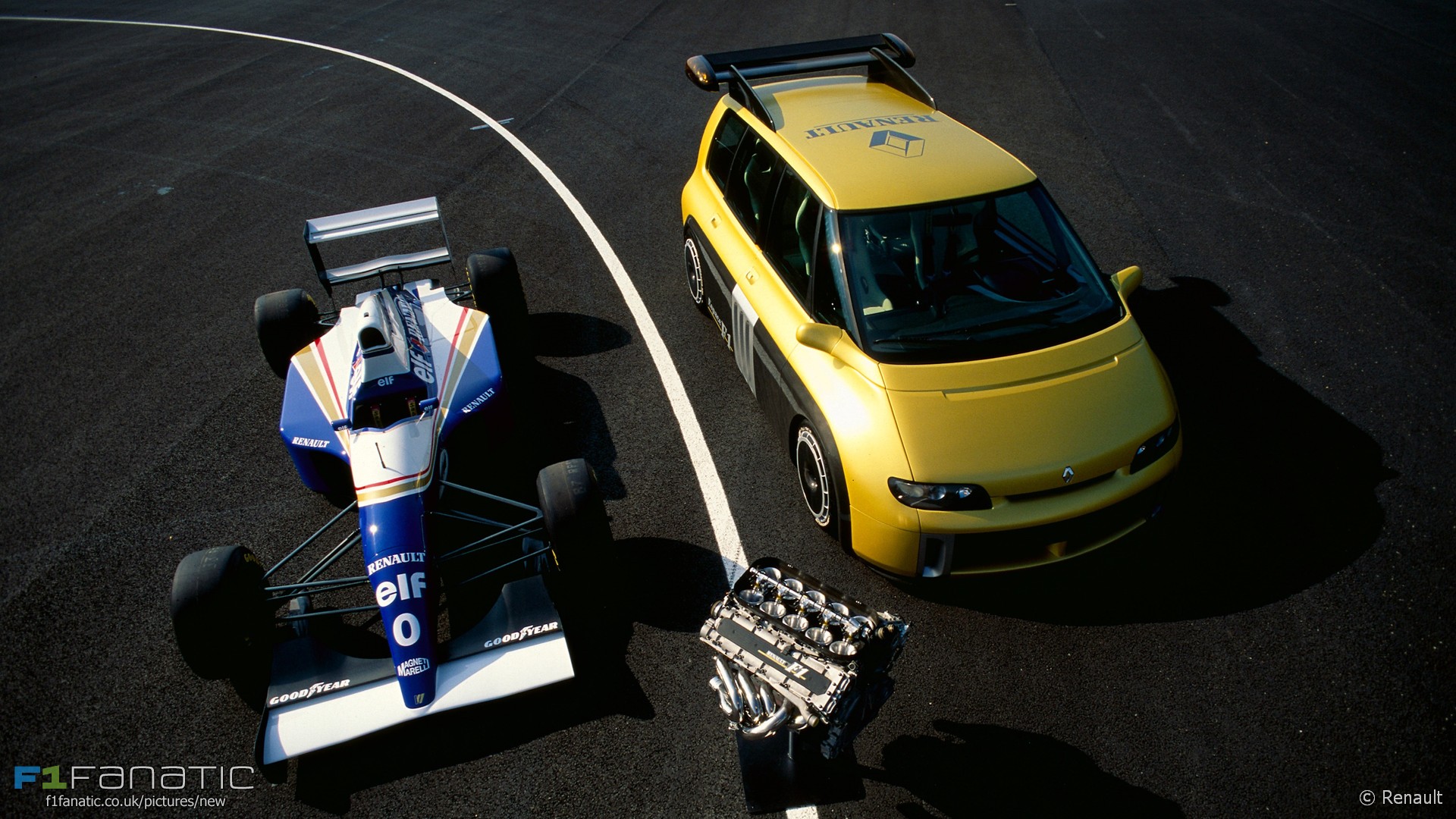 The F1-engined Mercedes AMG Project One is an extraordinarily bold car. But it’s not the first time a road car has been equipped with a Formula One engine. The Renault Espace F1 was arguably an even more radical creation.

The three-pointed star has turned a full Formula One power unit with its bleeding-edge hybrid technology into a ‘conventional’ road car. It has a price tag to match too, not that there are any examples left to buy.

However Formula One engines haven’t just found their way into two-seater sports vehicles. The Renault Espace F1 – the world’s fastest MPV – surely ranks as the most outlandish of these machines.

In the mid-nineties Renault was looking for new ways of using its hugely successful F1 engine programme to promote its road cars. The French manufacturer hit on an inspired idea. Having popularised the multi-person vehicle with the Espace, launched in 1984, Renault marked its tenth anniversary by equipping one with its latest F1 title-winning engine.

Creating the Espace F1 was not the work of a moment. The aerodynamic shortcomings of the slab-sided car meant major surgery was needed to accept its radical transplant: a 3.5-litre normally aspirated V10 Formula One engine plus the semi-automatic gearbox and rear suspension. These were all as found in the 1993 Williams FW15C, which won the constructors’ championship and took Alain Prost to his fourth and final title.

Former F1 constructor Matra, who manufactured the standard Espace for Renault, took on the task of fusing the two under the guidance of former F1 designer Gerard Ducarouge. Bespoke front suspension was created along with most of the bodywork below the window line. Carbon fibre was used extensively to strengthen the body and form the vast rear wing which kept the beast on the ground.

The car was developed at the Paul Ricard circuit (which returns to the F1 calendar this year) by Eric Bernard, who had ample experience of the drive train as it also powered the Ligier he raced for most of 1994. At that year’s Paris Motor Show Renault pulled the covers off Frankenstein’s family car and took it to a series of events for demonstrations.

Although the seven-seat configuration of the original Espace could not be retained there was still room for three passengers in addition to the driver. The rear couple sat either side of the screaming V10 and could peer down at it through transparent plastic.

Prost was among those who took the opportunity to drive it. Among the most famous passengers of the car was Frank Williams, who was taken for hot laps by his then-driver David Coulthard.

The Espace F1 offered supercar levels of performance in a machine which looked like it belonged on the school run. The shriek of an F1 engine has surely never sounded more incongruous than when it came from this one-off creation.

For F1 drivers used to a low-slung cockpit, being perched high in the Espace was a strange sensation. Unsurprisingly the unwieldy body shape and high centre of gravity made for extremely tricky handling.

At 1,300kg it weighed two-and-a-half times as much as a contemporary F1 car. But with well over 700bhp on tap the Renault Espace F1 covered the 0-60mph sprint in 2.8 seconds and topped out at 317kph (197mph). That’s the kind of road relevant technology we can all enjoy.

Of course unlike Mercedes, Renault did not create a production version of the Espace F1. Like Ford’s Supervan, this was strictly a prototype, and the sole example now resides in the Matra museum.