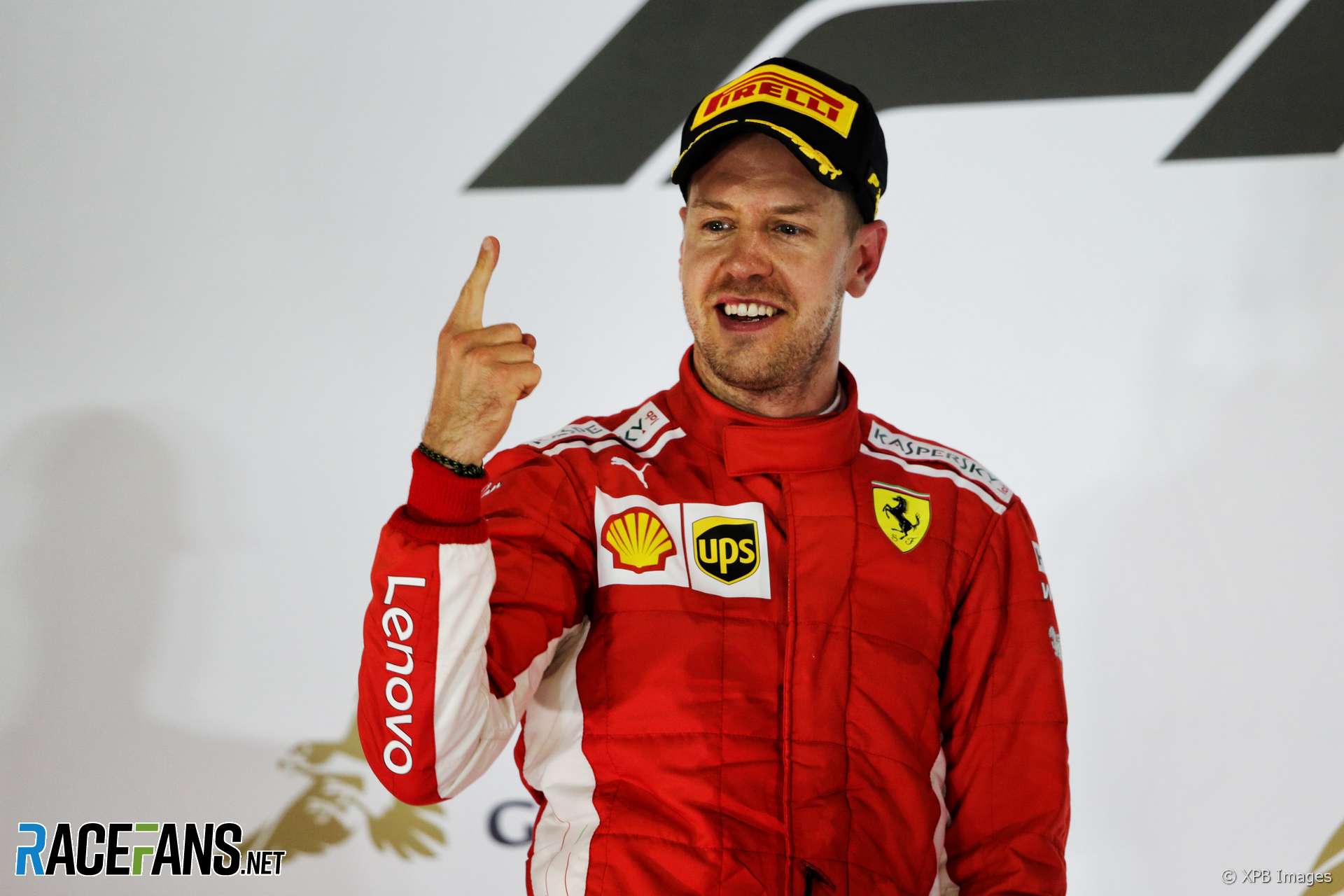 When Lewis Hamilton stuck his Mercedes on pole position for the first race of the 2018 F1 season many took it as a bad sign of the state of F1’s competitiveness this year.

For those hoping for a close championship fight it brought the worrying suspicion that 2017 had been a blip, and that Mercedes had put daylight between themselves and their rivals once again.

Two races later Sebastian Vettel is sat on a perfect 50. What more, the Bahrain Grand Prix was much a livelier affair than the season-opener in Melbourne> The outcome was genuinely in doubt over the final laps, something which happens all-too-rarely in Formula One.

Ferrari thrived on the heat of Bahrain while Mercedes sweated. Even without Hamilton’s penalty the two red cars bagged the front row. They did this four times last year but usually only at high-downforce venues: Monaco, Hungary and Singapore. That they were able to do it at a circuit which, to use engineer-speak, is ‘high power sensitivity’ (i.e.: you need a good power unit) bodes well for them.

Yet in the race Mercedes were able to take the fight to Ferrari. It served to indicate Mercedes much-vaunted ‘party mode’ was, as chief executive Toto Wolff insisted, not the explanation for why Hamilton suddenly went so much quicker at the end of Q3 in Melbourne.

Today’s teams are so professional and so rich in resources there are few performance variables they haven’t mastered. But in this case early-season uncertainty about exactly how tyres would perform helped create a nail-biting race.

Mercedes took note of Fernando Alonso’s pace after his early switch to medium compound tyres. Once they’d lost the opportunity to give Valtteri Bottas an advantage by pitting him before leader Vettel, putting him on mediums for a run to the end was a smart move which put Ferrari on the back foot. Impressively, Vettel eked out his soft tyres long enough that only on the final lap did Bottas get within range to mount an attack, and by then it was too late.

But whatever the exact details the encouraging point ‘neutrals’ should take away from the first two races is this: There are at least two teams at the sharp end of the field who are close enough in performance that they can genuinely rival each other for victory. That allows us to appreciate the differences in driver skill, strategy and teamwork which decide victory and defeat – and not just who has the best power unit.

This is the case for “at least two teams” because the potential of Red Bull remains a mystery. In Australia both cars spent almost the entire race bottled up in traffic, except when Daniel Ricciardo got a sniff of clear air and set a lap time nearly four-tenths quicker than anyone else could manage.

In Bahrain they suffered a disaster. Ricciardo’s car switched itself off on lap two. Moments earlier Max Verstappen paid the price for playing hard-ball with Hamilton by picking up a puncture at turn one. Associated damage forced a retirement soon afterwards.

Where they might have been when the chequered flag fell remains one of the great unknowns of the race. As Christian Horner pointed out the team could have been well-placed to capitalise on Mercedes and Ferrari’s switch to one-stop strategies instead of the super-soft/super-soft/soft approach which Pirelli reckoned was the optimum.

“Nobody actually ran the ultimate race today,” said Horner. “If we had stuck to our plan we’d have been looking pretty competitive today. The two stop was the faster race.” Had Ricciardo been around to run it, where might he have figured in the fight at the end? Hopefully we get our answer in future races.

On two occasions last year Bottas proved up to the challenge of withstanding fierce pressure from Vettel to win. This time the tables were turned and it was Vettel who got the job done.

But following a very poor weekend in Australia, and with persistent chatter about his contract in the background, Bottas undoubtedly missed an opportunity to earn serious brownie points within the team by taking a win from Ferrari.

His glance at the inside of Vettel at the final corner was a half-hearted affair. What might have been done by someone like Ricciardo, who has almost trademarked the art of pointing a car at an apex and braking outrageously late to force a pass?

Bottas always seemed a conservative driver during his Williams days. Then it was justifiable: That was a team which needed to avoid retirements, gather points and secure prize money. Mercedes demand victories and here was a chance to take one.

It isn’t the first time Bottas’s racecraft has been found wanting – recall how easily Vettel slipped by him at the start in Brazil last year. This was clearly a better weekend for him – he out-qualified Hamilton and passed Raikkonen at the start. But fairly or otherwise, it will be remembered for that hesitant half-look at the Ferrari.

Plan D was the unlikely super-soft/soft strategy which Vettel used to win the race (plans A, B and C being combinations of super-soft/soft/soft, super-soft/super-soft/soft and soft/medium). And the “issue” was of course much more serious than Vettel needed to know about at that stage.

Fortunately Francesco Cigarini, Ferrari’s left-rear ‘wheel off’ who was sent flying when Raikkonen was sent from the pits too soon, has had surgery on his leg fractures and already posted video on social media of himself hobbling around the Bahrain Defense Force Hospital on crutches.

However the alarming incident provoked questions over whether more needs to be done to prevent mechanics being hurt in this way. FIA race director Charlie Whiting pointed out that the disincentive for teams to get pit stops wrong is naturally very high, as it means they lose a car from the race.

Could F1 then require teams to put fewer mechanics in the line of fire by limiting how many of them are allowed to work on the car? The mathematics of this are persuasive: F1 could potentially take over 100 mechanics out of harm’s way by adopting a limit of six people per stop.

But it bears pointing out that IndyCar already has such a limit yet pit stop incidents are still common. There were several in Saturday night’s race in Phoenix. However IndyCar mechanics do more dangerous work (i.e. refuelling) in more cramped conditions.

Tough times in the midfield

Bahrain brought further confirmation that life in the midfield is tough in 2018. Margins are astonishingly thin: Alonso beat Romain Grosjean to the last place in Q2 by 0.000s to the nearest thousandth.

As a result the pecking or was very different in Bahrain compared to Melbourne. Toro Rosso, ninth-quickest of the 10 teams in Australia, set the fifth-best time in Bahrain and grabbed fourth in the race thanks to an inspired drive by Pierre Gasly.

Williams fell from eight to very last. ‘Very’ because not only were they the only team who couldn’t get around Bahrain any quicker than last year, they were slower to the tune of 1.3 seconds.

And the satisfaction McLaren took from fifth place in Australia can only have dissolved when both MCL33s were out-qualified by both Toro Rosso-Hondas. At least their cars, which suffered cooling problems in testing, endured the Bahrain heat.

With Haas bouncing back from their Melbourne disaster to take a strong fifth and Nico Hulkenberg putting the factory Renault in sixth, McLaren were the slowest Renault team in Bahrain and will be aware most of their points on Sunday came through other cars not finishing.