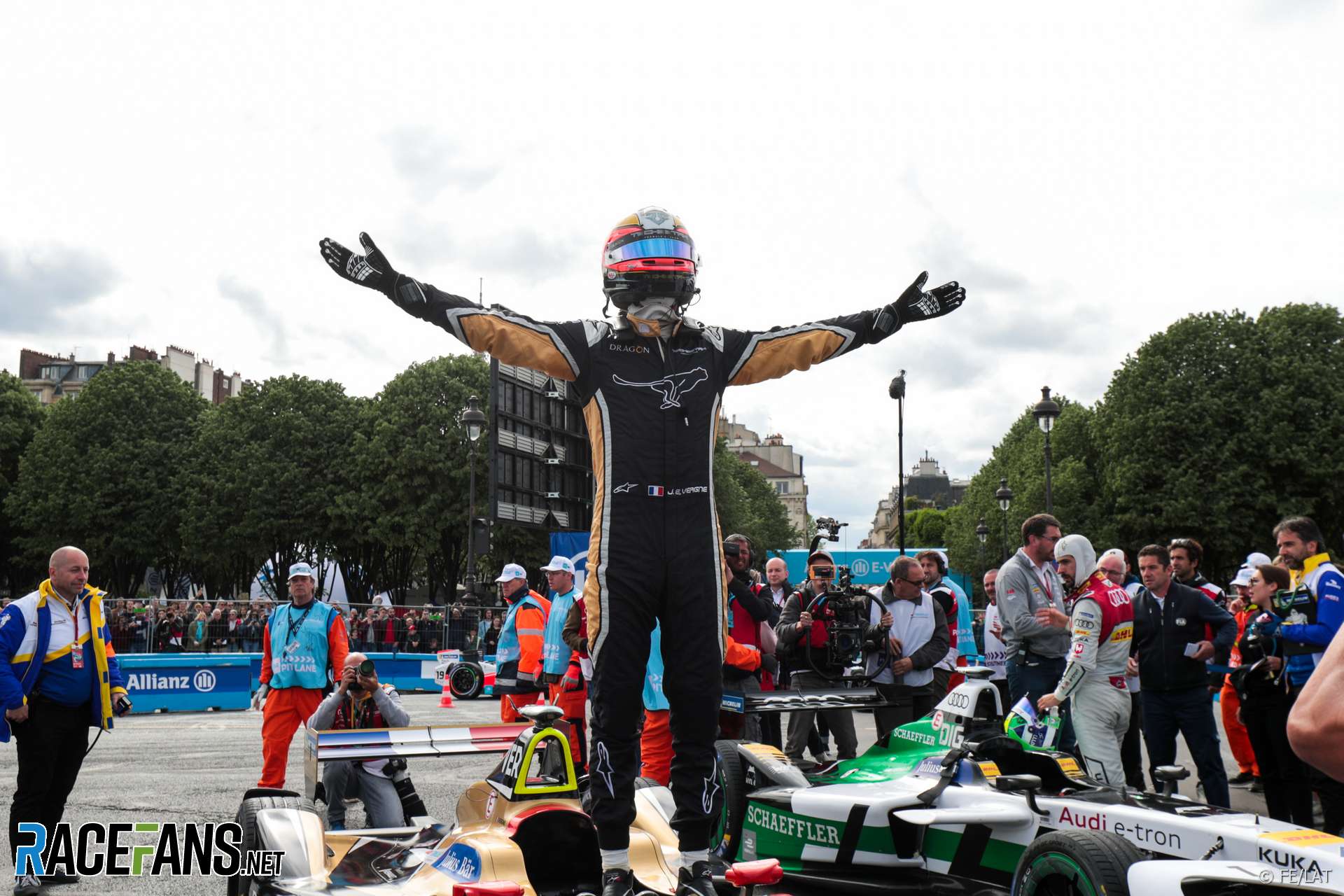 Jean-Eric Vergne won his home Eprix in Paris, after an exceptional lap to take pole and flawlessly executed race, leading all but one lap and keeping out of controversy that dogged the fight behind him.

Formula E’s Paris race has proved a blessing and a curse to its home racer, who took a podium in its inaugural year and crashed with broken steering last season. In a year when Vergne seems to have come into his own, banking on the talent he’d shown flashes of previously, he extended his points lead on home ground.

However, the incident-strewn Eprix didn’t prove as lucky for everyone. Newly returned to the series Ma Qing Hua failed to get off the grid at the start and by turn 4 third-place Andre Lotterer and second-placed Sam Bird were clashing wheels.

At the back of the grid, Mitch Evans, relegated to starting last following grid penalties and handed an additional time penalty, made an aggressive attempt to overtake Tom Blomqvist, mounting the back of the Andretti car, concertinaed between the Jaguar and Nico Prost’s Renault. Both Evans and Blomqvist were immediately forced to pit for repairs, races effectively destroyed before halfway through lap one.

Jerome D’Ambrosio had achieved a season-best qualifying to start on the fourth row in seventh, however a messy first lap left him swapping places with teammate Jose-Maria Lopez, who had qualified three places behind but made enormous gains at the race start.

Also losing out after an exceptional effort in qualifying, Antonio Felix da Costa (who had suffered costly lock-ups in his Super Pole lap) was immediately struggling in the race, retiring early on with an as-yet-unspecified technical issue, possibly suspension-related.

With cars instantly lapped, a relatively rare thing in close-fought Formula E, the 49-lap race became a game of chicken with regards to pit stops. Lucas di Grassi and Sebastien Buemi were able to conserve energy for two extra laps over the three race leaders and Maro Engel ahead of them, however Edoardo Mortara outdid even his own usually-excellent power management to draw out a third lap over cars ahead of him, attempting to recover from a poor qualifying.

His recovery was limited, though, as a clash with Lopez pushed Mortara into the wall, following an intense battle that Mortara claims was against Formula E’s rules, telling me Lopez moved “five or six times” on the straight.

More disappointed by their pit stops were Buemi, whose second car worked against him in energy management and forced him to back off from a podium challenge and Nelson Piquet Jnr, who for the second race in a row was forced to retired post-pit-stop with his safety belts undone.

While racing pit stops remain controversial in Formula E, movement under braking proved to be the most thematic controversy of the race, as Lucas di Grassi got increasingly irate at former Audi WEC teammate Andre Lotterer ahead of him. Alleging Lotterer moved under braking repeatedly, the Brazilian was still angry by the post-race press conference, where he insisted that penalties had to be made clearer and harsher towards the German.

While di Grassi has not always raced without controversy himself, infamously crashing both himself and Buemi out in the Season 2 finale race, his claim was supported by Sam Bird. Bird was passed by both Lotterer and Di Grassi on lap 37, after repeated contact with Lotterer, which he said wasted energy for them both and forced him to drop back.

By the final 10 laps of the race, the majority of drivers were under 40% – despite the short track at Paris, this meant they were going to the wire with little to spare, 4% usage per lap absolutely metered. As it was announced Lotterer and Bird’s incident was under investigation, it began to look increasingly as though drivers might not make the finish line with Bird dropping to 22% with six laps to the end.

Lotterer continued his charge to the front, looking for another Techeetah 1-2 finish as Vergne maintained a clear lead, he clashed with di Grassi just three laps to go. Running low on energy, it began to look mathematically impossible for the German to finish.

Formula E has strict rules about usable energy by the end of the race, with results having been taken from drivers that cannot cross the finish line with reasonable energy remaining. By the final lap, all the top three drivers were running low and crossed the line on 1%.

Or rather, three drivers crossed the line on one percent remaining energy and one of them also did it with only three wheels, as Lotterer’s dwindling energy slowed his car to a coast and Sam Bird was forced into him, destroying Lotterer’s rear wing and his own front left wheel as he was unable to avoid the Techeetah car.

Although the incident remains under investigation, Bird described it as “a bit too much” and that sanctions were necessary, clearly angry to have damaged his own car despite moving back up to a third-place result.

Meanwhile Vergne took the victory, after a record – and exceptional – pole lap and having led almost every lap of the race. Emotional, the Parisien said it was the race he wanted to win the most, in the week the driver-owner of Techeetah turned 28.

His championship lead over Bird extends to 31 points, not the biggest lead in Formula E and one that Vergne remains too cautious to even say makes him the favourite this season but a substantial gap in such a tight field. Heading to Berlin, Techeetah continue to dominate both driver and team championships with very little challenge seemingly offered to either currently – and one extremely champagne-soaked

Several incidents remain under investigation, including the two clashes between Lotterer and Bird and unsafe pit releases for Lotterer and Engel.

11 comments on “Vergne rises above Paris controversies for home win”