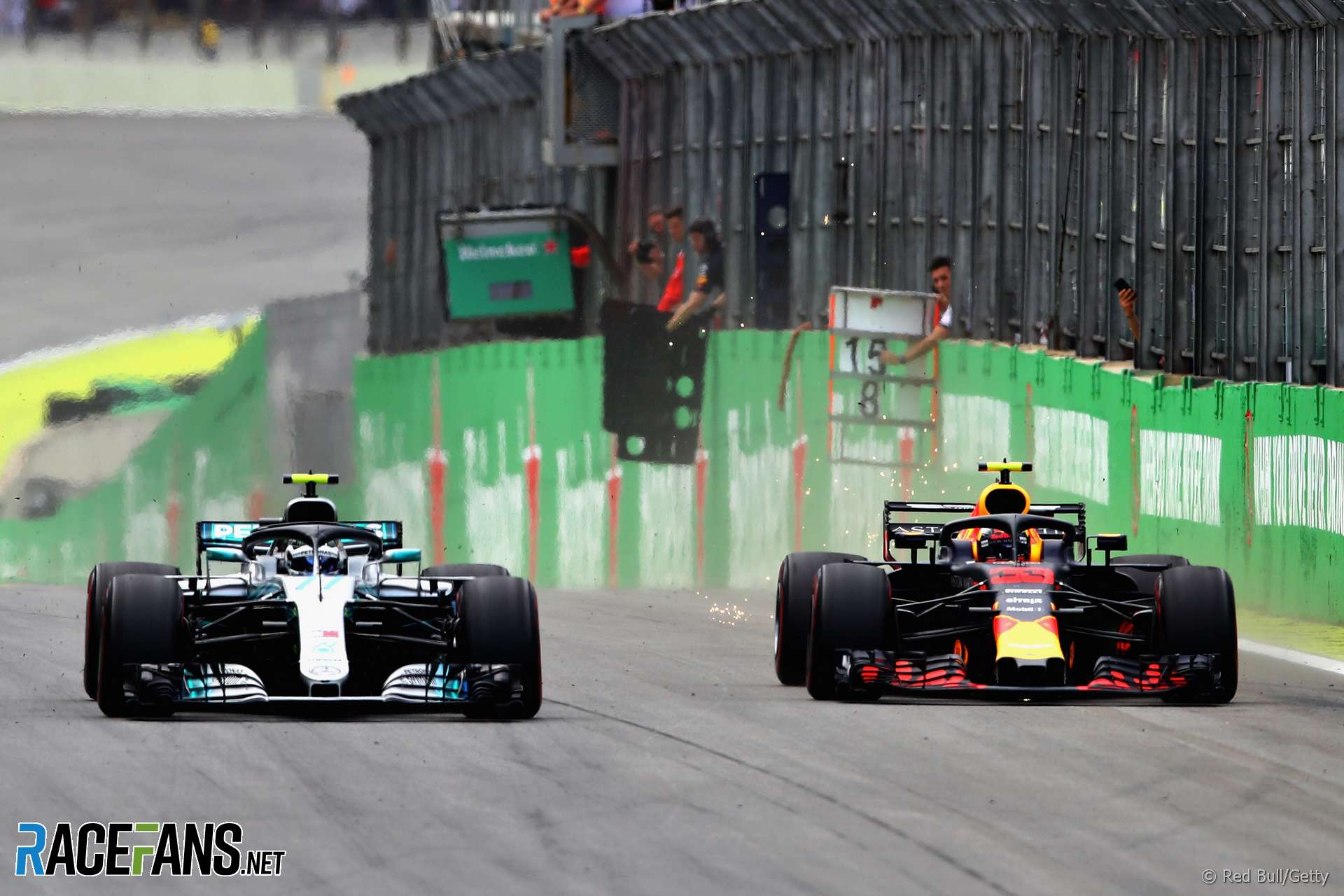 Max Verstappen, Lewis Hamilton and Charles Leclerc were RaceFans’ Star Performers of the Brazilian Grand Prix. Here’s our verdict on whose driving impressed us the most last weekend.

Red Bull didn’t have the pace in qualifying; Verstappen was half a second off pole but ahead of Ricciardo. He briefly passed Raikkonen at the start but lost the place. However within a couple of laps he began a storming charge. Verstappen but got by both Ferraris on laps three and four, then worked patiently on Bottas who finally succumbed on lap 10 at turn one. Impressively, Verstappen made his super-soft tyres last until lap 35, and after pitting he emerged on Hamilton’s tail.

Within a few laps he’d completed a clean sweep of passing the Ferraris and Mercedes, but on lap 44 he tripped over a lapped Ocon at turn two. Perhaps he should have left more space, but the Force India shouldn’t have been where it was, and cost him a seemingly certain race win.

Hamilton narrowly beat Sebastian Vettel to pole in a session with unpredictable rain showers. Starting on super-softs instead of softs threatened to put him at a strategic disadvantage, but didn’t, and the advantage off the line he enjoyed meant he led safely led into turn one. With a slowing Bottas behind him he enjoyed a quiet first stint but was forced to pit relatively early due to blistering. He went onto the mediums and put up little resistance when Verstappen, on 16-lap fresher soft tyres, cruised up behind him.

But four laps later Verstappen’s clash with Ocon handed the lead back to Hamilton. His run to the chequered flag was far from straightforward, however, as serious engine concerns left him juggling many settings changes. A superb win under trying circumstances.

Leclerc looked set for a Q2 elimination as the rain intensified at the end of the session, but he insisted on staying out for one more lap and he improved enough to make it into Q3. He was the only driver to improve in the session as time ran out. He was beaten by Ericsson in Q3 by two tenths, but quickly made up for this in the race, as he led the midfield through the first sequence of corners. He spent the rest of the race error-free on a two-stop strategy and finished best of the rest.

Ocon’s troubles began when he lost out to his team mate by only 0.029 tenths and was eliminated in Q2. He had an awful start and was last by the time everyone made it out of the first series of turns. He spent the rest of the race playing catch up and he went long in the first stint to minimize the damage. He made his way up to tenth before he stopped on lap 40 for supersofts.

Following his pit stop he was a few tenths quicker than leader Verstappen, who was managing his pace. Ocon tried to go around the outside into turn one, then kept his nose in as they rounded turn two. The pair collided and Ocon fell to 16th before being given a 10-second stop-go penalty. This took him completely out of contention for points and he finished 15th.

Bottas was forced to start on the second row after losing out his team mate and a Ferrari. In the race he quickly got by a slow starting Vettel but didn’t have the pace to attack his team mate for the lead. He did well defending against Verstappen, but eventually, he was helpless and he fell to third. Bottas was one of the first drivers to stop for new tyres on lap 18 and was expecting to go to the end on mediums. During his second stint he struggled with pace and was overtaken by Raikkonen and then Ricciardo. After Ricciardo got through he stopped for fresh softs and cruised to finish fifth, well behind his team mate.

Ferrari looked like they had the pace to fight for the win and after qualifying on soft tyres in Q2 they appeared to be the favorites. Vettel suffered from a sensor failure for the entire race which drastically impacted his pace and meant he was forced into a two stopper. He ended up finishing sixth while Raikkonen finished third on a, quicker, one-stop strategy.

Heading into the weekend Daniel Ricciardo knew he would have a five-place grid penalty since the team was forced to replace his turbo. He started 11th and quickly made his way through the field and was in with a shout of the podium but was held up by Bottas for too long.

Haas had a strong race, finishing eighth and ninth, with Grosjean slightly ahead in qualifying and the race. The Frenchman did make contact with Ericsson in turn two and lost part of his bargeboard, but it didn’t have any lasting effects on his pace for the rest of the race.

Sergio Perez showed strong race pace after qualifying 12th and finishing 10th on a two-stop strategy. Ericsson suffered damage on the opening lap that made his car essentially undriveable, causing a spin and his eventual retirement from the race.

Renault were much slower than expected with Sainz qualifying 16th and Hulkenberg 14th. They had slightly better pace in the race but Hulkenberg was forced to retire with an engine problem, while Sainz finished 12th on a three stop strategy.

Tensions ran high between the Toro Rosso drivers again. Gasly out-qualified Hartley again, but was caught by his team mate in the closing stages and ignored a string of orders to let his team mate by, before eventually gave way with three laps to go.

Williams were stuck at the back of the field yet again, but Sirotkin was quicker than Stroll in qualifying in what Paddy Lowe described as, “one of his best of the year”. The young Russian managed to stay ahead in the race as well.

McLaren also found themselves nowhere near the points and while Alonso maintained his qualifying streak over Vandoorne the Belgian did finish ahead of the three time world champ in the race.