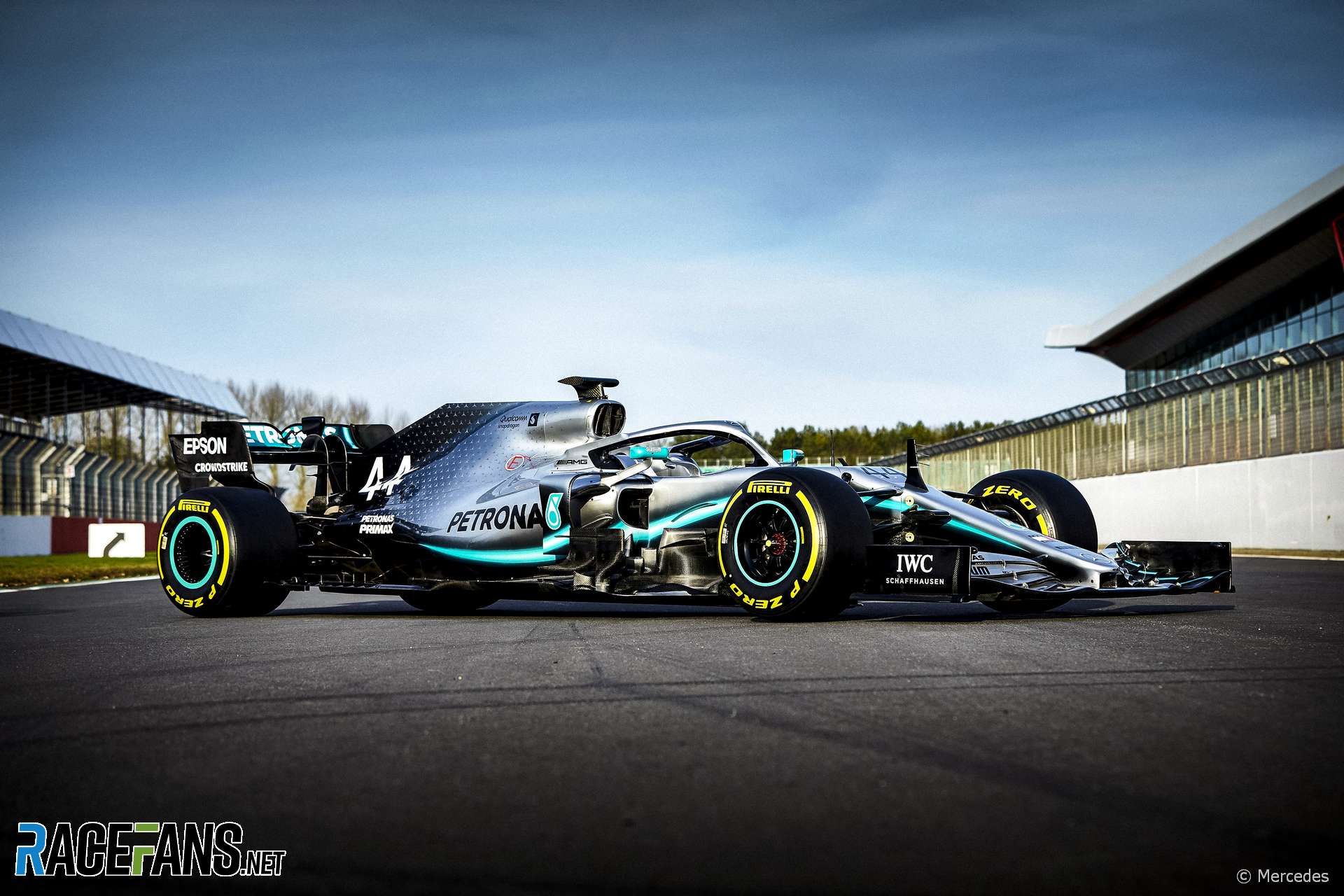 It’s incredible to think Formula 1’s V6 hybrid turbo regulations are now in their sixth year, with one major update to those rules along the way, and in that time no one has managed to un-seat Mercedes as champions.

The 2019 F1 season brings the second big rewrite to these rules, largely concerning aerodynamics. Will the Mercedes chassis and powertrain be able maintain their dominance?

Unveiled at a private shakedown at Silverstone, Mercedes revealed their tenth car since returning to F1, the W10. Subject to huge anticipation by fans and rivals alike, the surprise is perhaps the car isn’t that different to its predecessors, at a time with its rivals are making bigger changes to their car in bid to beat the new regulations and Mercedes. Will it be enough?

Its hard to pinpoint one reason for Mercedes dominance since the new power unit regulations came in for 2014. The team have many aces: its engine power, qualifying modes, refined aerodynamics and great handling. You would have to look not at the car, but the team, to understand it’s the engineering at the factory that is their trump card.

That’s not to say they don’t have their limitations: tyre management and race strategy have been weak points for Mercedes, particularly through the early season when they seem to struggle to adapt as quickly as their rivals.

Perhaps the aero and tyre changes this year will be the end of the Mercedes cycle of winning. But it’s more likely that their approach still works, and the success will continue. Its new car still ignores the template used by all of its rivals: shorter wheelbase, higher rake, high-top sidepods and lower front suspension. Mercedes have kept their template with the W10, purposefully going the opposite way with each of those key design points.

If you looked at the W10 in another colour scheme and analysed it, you’d say it wasn’t a winning design when compared to any other car. But Mercedes have made their engineering approach and resulting counter-design decisions work so successfully, you start to wonder why another team hasn’t yet tried Mercedes long wheelbase/low rake design.

Out first look at the new car shows these approaches are still in place. The W10 exhibits no obvious change in wheelbase, rake, nor radically different approach to its aero. But there remain some areas where its clear they have thought long and hard about new solutions.

Additionally, Mercedes often bring one major update to the car quite early in the year, typically for the start of the ‘European season’, so some aspect of the aero will change a lot, while the car’s basic architecture is unlikely to alter through the season.

The front wings for 2019 we’ve seen so far have been very much cookie-cutter responses to the new rules. These ‘Version 1.0’ wings haven’t exhibited any trick solutions, although the Mercedes has one eye-catching feature on its front wing endplate.

Since 2009, when wider wings were mandated, teams have opted for ‘outwash’ wing designs, where the wake of the front wing is pushed outside of the front wheel, to push the wheels turbulence away from the car. This in contrast to the ‘inwash’ design of the narrower pre-2009 front wings, when the wing swept inside the front wheels. The 2019 rules sought to reduce this aerodynamic outwash and enforced a much narrower endplate, which is not allowed to curve as extremely outwards as before.

Mercedes’ launch spec wing still sports an endplate which outwashes as much as the rules allow, but the rear top corner leans in slightly. This has led some observers to term it an inwash design. This isn’t quite the case, the endplate is still some way from the inner face of the front wheel and unable to create the extreme of inwash design seen pre-2009. It seems counter intuitive to lean the endplate back and aimed directly towards the tyre, but what Mercedes appear to be doing is playing the airflow spilling off the top of the endplate.

Much of the airflow outside a typical endplate will outwash out around the front tyre. This will help to quell the vortices the tyre generates when its cylindrical shape hits the oncoming air. F1 teams commonly create and direct vortices off bodywork that contra-rotate and control other unwanted vortices created downstream.

It’s likely that Mercedes have done this to direct the endplate vortex more accurately, to negate the tyre vortex, thus reducing the effect of the tyres dirty wake hitting the rear bodywork. Other teams are likely to create stepped edges to the top of the endplate to create just this sort of effect, but have yet to reveal these solutions to us.

By mounting the front wishbones higher relative to the chassis, this pushes the upper mount for the front upright outside of the wheel. Rules allow a camber plate to extend out from the upright to connect to the wishbones, thus we see the Mercedes front wheel pivot high up and external to the wheel/brake duct. Toro Rosso came to the same conclusion in 2017, but dropped the design from their current car; Mercedes have continued with it on the W10.

Much of the key aero concept talk since 2017 has been around sidepods, when Ferrari introduced their high-top sidepods, prompting others to follow suit. The repackaging of the sidepod inlet and crash structures form a deeper undercut below the inlet, which directs more airflow around the sidepod and over the diffuser, to create more downforce. Every 2019 car launched so far has this solution, so Mercedes’ decision to eschew this trick and go its own way is interesting.

Despite talk about different power units and different teams’ sidepods, there is a basic amount of inlet area, radiator size and sidepod volume that teams need to package. There are different ways to create the different airflow structures towards the back of the car as a result.

Mercedes’ trick appears to be the latter. The sidepods are narrower at the front this year, with less of an undercut as there’s a deeper inlet. They are trying to push the airflow around a slender pod to get it towards the rear of the floor. It’s not necessarily better or worse than other ideas, if done correctly, just different.

Further back on the sidepods there are a couple of blisters sticking out through the black painted section of bodywork. These catch the attention, but similar bumps have been on the Mercedes since 2014.

The power unit regulations have specific positions for where the engine mounts to the chassis and gearbox. With the evolution of the V6 engine, the mounts are now some way from the smaller engine within. This allows teams to package bodywork much closer to the engine itself, but the mountings cannot be repositioned, so the result are these bulges.

Many of Mercedes’ problems over the past few years have been tyre management and a set up that is on a knife-edge. A lot of this revolves around the rear suspension and its effect on the rear tyres, which have been struggling to keep temperatures low enough to keep them in their working window.

Last season this was often a problem until the team introduced mid-season updates which altered the rear suspension and brake ducts brought it under control. This also included the drilled and finned rear wheels whose legality became such a big talking point in the last few races.

In 2018 the rear suspension geometry was altered, partly for kinematics, but also for aerodynamics to push the rear leg of the top wishbone into the airflow to direct it through the rear wing.

This year this extreme raising of the top rear wishbone has been eased, with the inner mounting far lower on the gearbox. As a result the wishbone is angled upwards towards the wheel. This reduces the aero gain, but brings a better geometry, to get the right change in camber with the suspension’s movement.

Also note those late-2018 style drilled and ribbed rear wheels are still fitted to the car. As their legality was left unresolved last season, this may be an excuse for a flare up with rivals at the first races, or alternatively their rivals may choose to follow the heat-exchange tricks with their own rear wheel designs.