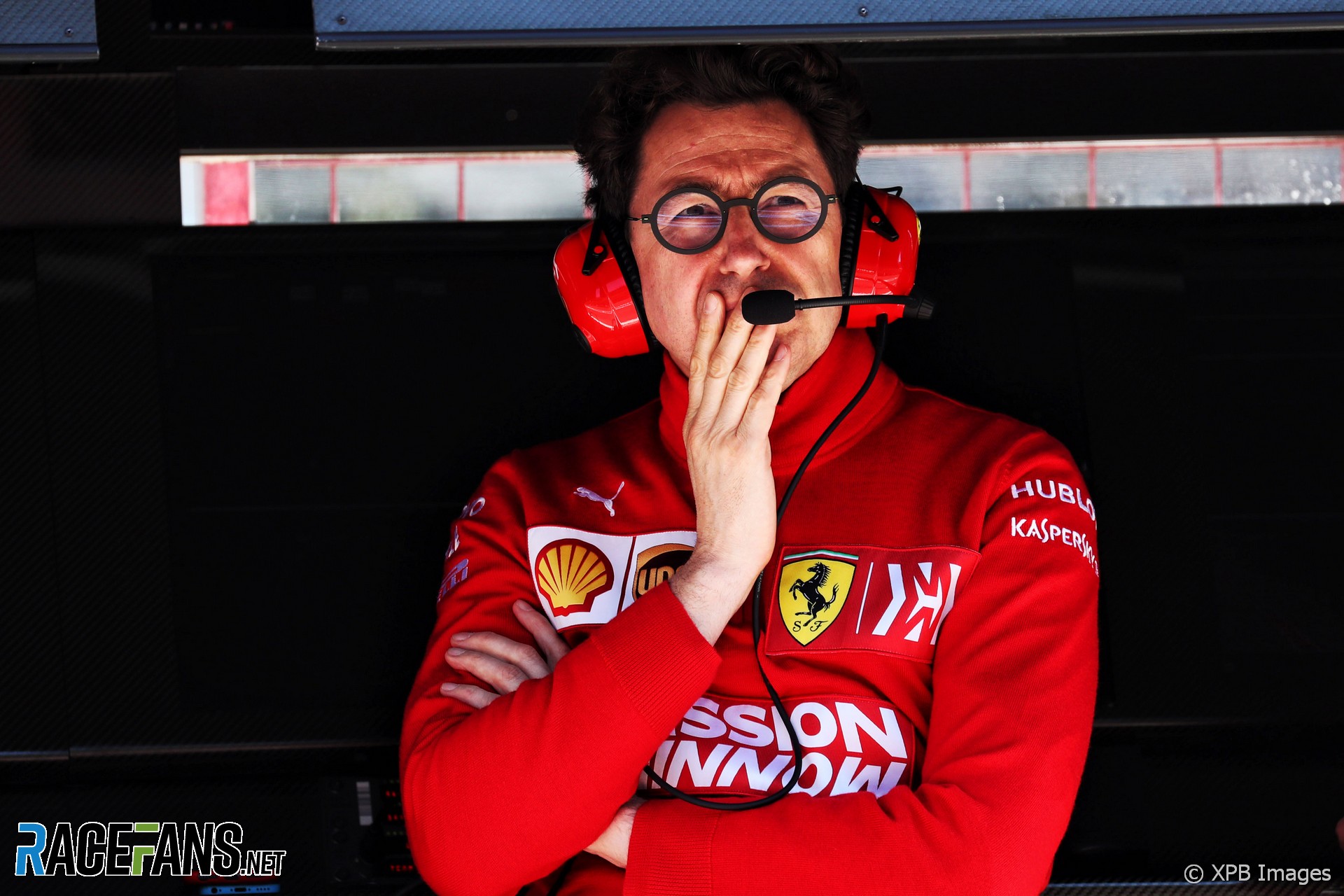 After the promise of pre-season testing, Ferrari’s season could hardly have got off to a more disappointing start. Yet the team deserves credit for the unflinching way in which it is facing the problem head-on.

No longer is it treating reasonable enquiries about its lack of performance with contempt and condescension. Post-Maurizio Arrivabene, the team under Mattia Binotto is not shying away from publicly confronting its shortcomings, however painful.

Following their fifth consecutive defeat last weekend, and the fifth straight one-two for Mercedes, Binotto offered praise for their rivals.

He then admitted that while Ferrari’s problems are “obvious and straightforward”, the causes and solutions are anything but.

“We are quite a young team”

Aside from Sebastian Vettel’s do-or-die first-lap lunge, Ferrari never looked like challenging Mercedes in Spain. Indeed, the silver cars were further ahead of the competition than at any stage since the 2016 British Grand Prix.

The characteristics of their car befit a team whose founder once memorably opined that aerodynamics are for people who can’t build engines. The SF90 looks great on the straights, but not in the corners.

Its low-speed cornering is a particular weakness. This was put into sharp relief in the final sector at the Circuit de Catalunya, and will have set alarm bells ringing for the next race at Monaco.

It’s the second time in 12 months the team has been found wanting in this way. They began last year strongly, then went down a development cul-de-sac with their car, which finished off what was left of Vettel’s championship chances.

While the team continues to bring parts to its 2019 car, its fundamental shortcoming remains unchanged.

“The limitation we had [in Spain] were present already in the first races of the season,” Binotto admitted. “I think the entire weekend certainly emphasises [it is] straightforward and obvious.”

“How long it will take [to fix] is difficult to answer,” he added, “I think more important for us is at first to understand really how to address them and then I’m pretty sure we can do it quickly.”

Depending on your point of view this either smacks of optimism – how can one know how quickly an undiagnosed problem can be fixed? – or confidence in the team’s capabilities.

Binotto describes Ferrari today as “quite a young team” who know that “in terms of process [and] methodology there is still much to learn”. However he is confident they are “improving” and its season is not yet a write-off. “If it’s a concept design [problem] obviously it depends what it is and I think there are things that you may address within a season.”

It came as something of a surprise that Ferrari chose to introduce an upgrade to its engine at the Spanish Grand Prix. This has been the strongest part of its package so far, notwithstanding the electronic problem which cost Charles Leclerc a likely win in Bahrain.

Only its engines were replaced in Spain – not the hybrid hardware. Binotto said the change had been brought forward by four weeks once the team realised just how far behind Mercedes it was at the first race weekend of the year.

“When starting the season in Australia we realised that there was performance to recover to the main competitors,” he said. “And so it was important for us to push as much as possible on the development.

“We still believe that development will be a key factor in the season so I think whatever programme may be anticipated it’s our task and our duty to do it. So we decided very early this season to try to anticipate the programme of the engine. It has been a big effort. Not straightforward, not obvious.”

It says a lot about how keenly Ferrari are pursuing every last tenth of a second that Binotto believes the engine upgrade could be useful to them at Monaco, the least ‘power sensitive’ circuit on the calendar.

“It has been a very last-minute decision to introduce it,” he said. “We just concluded the homologation process in the last days [before the race weekend]. We did it because we are convinced that it could have been important here as well and may be important in the next races, maybe even Monaco.”

If the new engine made a difference in Spain, it was surely more a case of keeping Red Bull behind them in qualifying than putting up a challenge to Mercedes in the race. That said, Vettel did come very close to out-dragging the silver cars to turn one from third on the grid, and had he done that the race’s complexion might have been very different.

Most teams have found Pirelli’s new generation of thinner 2019 rubber challenging at some point, though Mercedes is a conspicuous exception. Binotto believes this is an important aspect of the overall picture.

“Tyres certainly are difficult to manage,” he said. “I think tyres are a significant, key performance factor. [The] management and optimisation is key for the overall performance of the car itself.”

Again, Binotto stressed the difficulty of working out how to optimise Pirelli’s latest rubber.

“The tyres this year are behaving differently compared to last year,” he said. “From the Pirelli point of view they achieved their targets. The tyres are not blistering which certainly from the safety reason is good.

“But understanding and addressing or optimising the performance is part of our job, and if I may see that, certainly it’s not obvious, not straightforward and not an easy task.

“[Last] weekend we had various situations, track temperatures quite different from Saturday morning to the afternoon to today and again I think that part of the data we need to analyse through the weekend to understand our car behaviour.”

Ferrari may be more forthright about the problems they are experiencing this year, but it’s clear those problems are multi-faceted and complicated. This does not sound like a team which is one bright idea away from turning its season around.

28 comments on ““Not straightforward. Not obvious”: Ferrari facing tough challenge to rescue 2019 season”