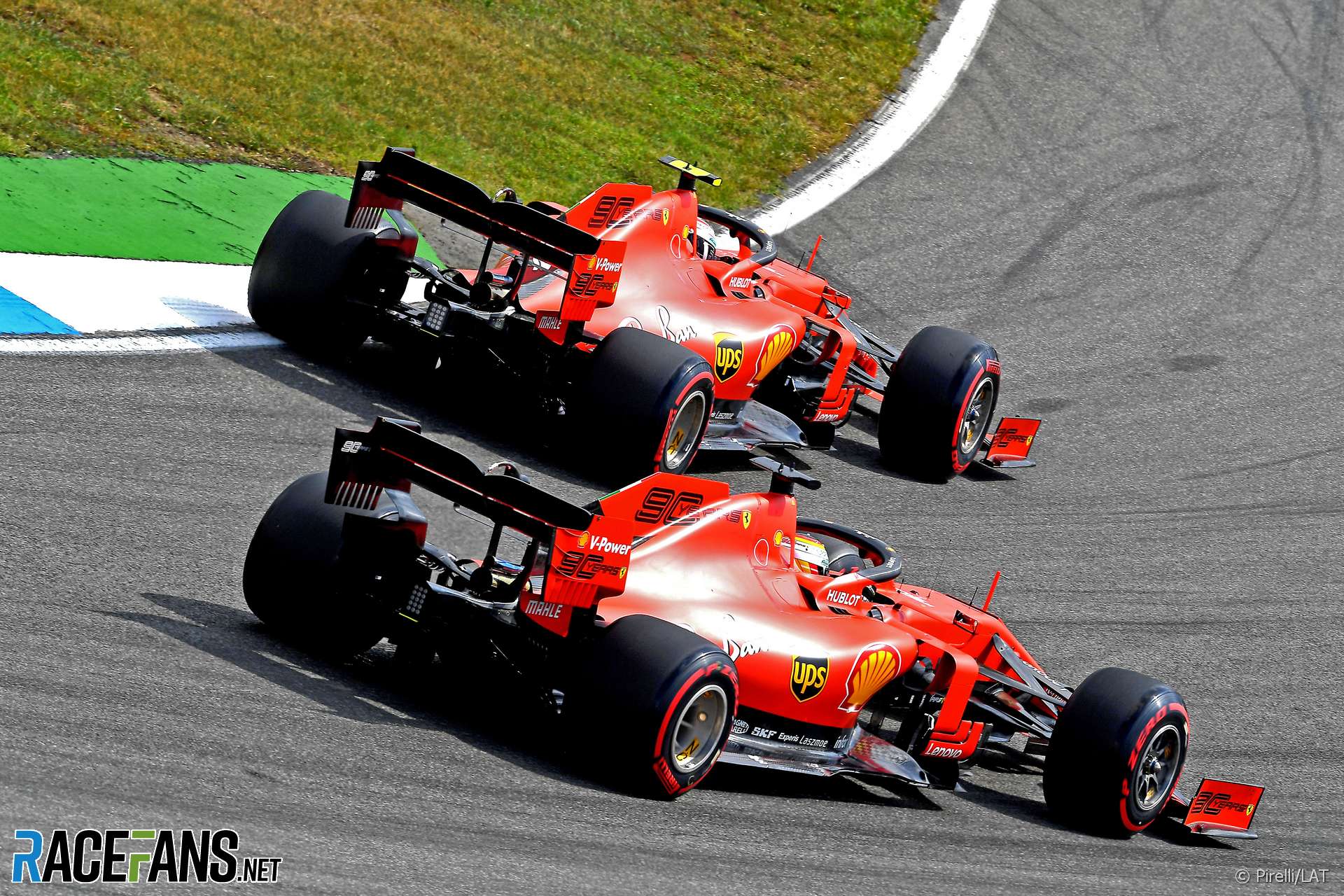 After setting the pace at the Hockenheimring on Friday, Charles Leclerc feared falling track temperatures and a sprinkling of rain on Saturday would help Mercedes turn the tables on them.

But though Mercedes did prevail on Saturday, it was for entirely different reasons to those Leclerc foresaw.

Yes, the track was cooler, but it was still warm and dry. Up until Q3 Leclerc looked a serious contender for pole position.

But Ferrari haven’t missed a bunker so far this season, and in qualifying they hit two of them. Technical gremlins sidelined Vettel before he’d completed a single lap, then more problems prevented Leclerc from running in Q3. Yet again Ferrari snatched defeat from the jaws of victory, and yet again the prime beneficiary was Lewis Hamilton, who poached his fourth pole position of the year.

Following an overnight shift in the weather forecast, the rain failed to materialise. And the prospects of rain on Sunday have receded, though not completely. At the time of writing there is still a decent chance the race will at least start on a wet track.

If it does rain, we could be in for a real treat, as two of the sport’s most celebrated wet weather exponents are sharing the front row. Hamilton demonstrated his tremendous skill in damp conditions at this track last year as he won from the seventh row of the grid. As for Max Verstappen, who starts second, his bravura performance in the soaking wet 2016 Brazilian Grand Prix had the touch of true greatness.

The forecast rain brings with it the possibility we may see F1’s wet weather standing start regulations pressed into use for the first time since they were introduced at the beginning of 2017. This allows the race director to send the field away from the grid behind the Safety Car before ordering the race to begin with a standing start.

If we get a dry race but a further drop in temperatures, Mercedes and Hamilton are going to look strong. However the ever-improving pace of the Red Bulls is not to be discounted. Verstappen, despite continuing turbo lag problems, was only three-tenths away in qualifying and the RB15 has been consistently stronger over a race stint compared to qualifying.

Verstappen may be compromised by his enforced switch to soft tyres following his lag problems in Q2. Starting on the soft tyres instead of the mediums will boost his chances of attacking Hamilton at the start, but could compromise his opening stint. Even so, merely holding on to second place and making an early first pit stop to attempt an ‘undercut’ could give him a shot at the race lead.

As for the Ferrari drivers, they can throw caution to the wind as they bid to climb the order. Leclerc is locked in to starting on mediums (assuming it stays dry) so he will have to make progress as best he can from 10th. Vettel, set to start last, has more options.

The midfield fight has been exceptionally close all weekend. However Kimi Raikkonen drove superbly in qualifying to lift his Alfa Romeo clear of it and come within a hundredth of a second of displacing Pierre Gasly’s Red Bull from fourth place. These two head a queue of seven different cars in as many positions, which bodes well for a fantastically close scrap for the second half of the points places, though the midfielders are unlikely to prevent the Ferraris sailing past in the DRS zones.

Whether Ferrari can do much better on that will depend on the weather. Last year Hamilton won from 14th after the rain came down.

Perhaps the fates are conspiring to allow Leclerc to avenge that lost Ferrari win? Or, in what would be the ultimate poetic justice, Vettel? But even if that was the case, Ferrari’s performance today gives little reason to believe the team wouldn’t find some way to squander the chance.

Will anyone prevent Lewis Hamilton from taking his eighth win of the season? Where will Leclerc and Vettel climb to from 10th and 20th respectively on the provisional grid? And who will win one of the closest midfield battles we’ve seen all year?