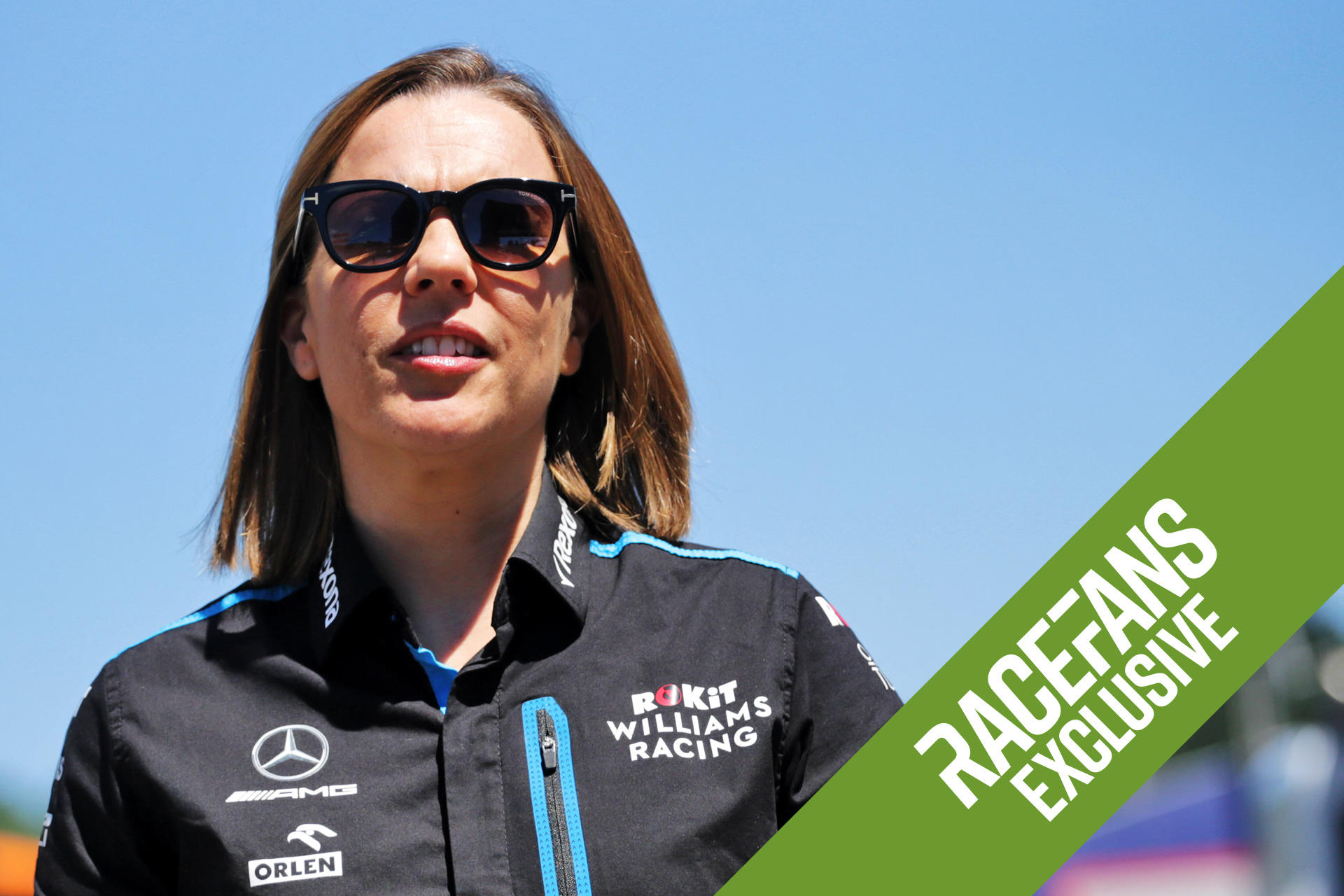 Wind back the Williams clock by a decade, and the first thing that strikes you as the hands and months and years reverse is the number of technical directors the team has employed since 2009. No fewer than three after Sam Michael left the team during 2011, with the subsequent roll-call including Mike Coughlan, Pat Symonds and Paddy Lowe. The team currently has a vacancy at the top of its engineering structure.

That makes for an average of 2.5 years per period of office, excluding any ‘gardening leave’ periods. Given the evolutionary nature of F1 cars and the fact that newcomers generally rip up what went before in order to introduce their own concepts, it is little wonder that Williams has little continuity on the car design front, in turn reflected in the team’s recent downward performance spiral?

To recap: The team placed sixth (with customer Cosworth power) in the 2010 F1 constructors championship, ninth the following two seasons, eighth in 2013, then rose to two third places followed by a brace of fifth places before last big slump to last. This year the team lies tenth with a single point.

While statisticians point out that the average pans out at seventh over the decade – 6.8 to be exact – the fact is that sponsors and fans don’t quite see it that way, and hence the sport’s vicious circle kicks in. Modest results mean less revenues from both F1 and sponsors, leading to less budget spent on car performance, leading to disappointing results that in turn impact on revenues, and so on and so on.

It’s a very difficult spiral to exit, and one not made an easier by arguably the sport’s worst turnover of technical directors. Consider that Patrick Head, admittedly a director and shareholder, was technical director from 1978 to 2005, while at Red Bull Adrian Newey has been with the team since 2006, and was with McLaren for eight years before that – during both teams’ heydays.

Continuity is king, yet following a churn of four technical directors in a decade, Williams currently has no single head of its technical activities. Its heads of design (Doug McKiernan), vehicle engineering (Adam Carter) and trackside operations (David Robson) report directly to Claire Williams, the team’s de facto team principal.

Given this background it is no surprise to hear Claire Williams state that the (predominantly) family-owned team would rather operate in this manner than make a wrong hire at the top of its technical structure. Clearly, for whatever reasons, there have been a number of those over the decade. Still, the lack of a technical director does not mean that the team has taken its recent drubbing lying down.

“I have been saying, it’s not anything new, it’s not new news or it’s not secret, but I do genuinely believe that Williams has turned a corner,” she says during an exclusive interview in Hungary, conducted in her office in the team’s hospitality unit.

“I think the work that we have put in that people don’t get to see, because it is all behind-the-scenes stuff, then you want to believe that the work, the change that has gone on at Williams, which I am so proud of, that it’s all going to shape the future. And I’m really excited about this.”

She talks about a “new culture that’s been created”, of people promoted (mainly from within) and a “new generation of leaders within our business.”

She adds that the changes form part of a nine-month long change programme because it “was never going to be a quick-fix [to correct the spiral], because that’s just putting a plaster over stuff. We had to get to the root cause of all our problems and fix them. We feel that we have passed our point of return, we’re well down that path and we’ll start seeing the returns of that.”

“We’ll remain stable, from a structural perspective, moving forward, because I don’t think chopping and changing either is the best thing to do. You’ve got to make your change and then either believe in it and let it evolve and grow organically. And I think we have the right people now, doing the right jobs.

“I think there are a couple of areas where we need some bolstering, maybe at a more senior level, and other levels across the organisation.”

The current headcount of the team runs to around 550, with administration and allied services accounting for another 75 – mostly supporting the F1 operation – while sister company Williams Advanced Engineering employs another 325 heads, making for a total of almost a 1,000 people, or a 58-fold increase over the 17 people who made up Williams when founder Frank founded the company in 1977.

Still, despite 2021’s looming budget cap there is sufficient headroom to bolster individual departments, and the ‘right’ TD is surely one of those. The list of exclusions in the financial regulations, such as administration, marketing and hospitality, means Williams F1 will be able to recruit another 100 people or so before budget cap considerations kick in.

That said, how does the 2020 budget look, particularly in view of the team’s disappointing on-track results?

“But, we’re a publicly listed company; everyone can see our results. We’ve had some really good years, made a profit over those years. 2020 and beyond are looking OK for us. This isn’t an easy environment to be in, trying to accrue huge amounts of sponsorship money to keep your racing team going, and so we’ve always had to be slightly creative when it comes to how we generate our income.”

I point out that listed companies are required to make profits, whole race teams are expected to spend every spare coin on performance, so do the two really square up?

“On your balance sheets you don’t actually have to talk about it, what you’re actually going to be investing,” she counters, adding that “It’s all about the previous year. So you could actually put a little line on your annual results to say, ‘We’ve made that 10 million pounds profit and in the following year we are going to be spending on X, Y and Z.’”

I point out that Williams remains the only team on the grid still using a wholly aluminium gearbox casing, while the composites area is said to be in need of investment. Although the company’s regular posting of profits is impressive and points to tremendous financial discipline, the burning question is, of course: Is the team making sufficient investments for the future?

“You’ve got to prioritise.”

It is clear that Williams is holding out for 2021, when F1 faces all-change: “In 2021, from a cost cap and prize fund distribution perspective, it can be very positive for us as the first years start playing out,” she says.

But, of course, the trick is getting there: “We are very lucky with the partners that we do have and that they are incredibly supportive. I haven’t had any complaints from any of our partners this year about our performance, and I think that probably says a lot and is testament to the work that our marketing group do to deliver value in other ways, other than just what’s going on on the race track.

“[Title sponsor] Rokit, in particular, joined us last winter, and they knew that we’d come last in the championship and yet they’d partnered with us. It’s not an insignificant partnership, it’s a big partnership and as everybody has seen they’ve just extended that partnership for another two years, which is great.”

Like most non-manufacturer outfits, Williams is worried that the 2021 regulations – financial, sporting and financial – will be diluted before coming into force, likely at the insistence of the Big Guns, who have arsenals made up of threats and, in the case of Ferrari, a veto.

“They were ready as far as I was concerned. Of course I have concerns that, you know, four months in Formula One is a long time to allow people to potentially get things changed. I hope they don’t, because I think [it’s crucial] for the future sustainability of this sport, or at least for some teams within it.

Do the 2021 technical regulations – what is known about them thus far – work for or against the Williams business model, which is to be fully-fledged independent constructor rather than picking and choosing bits from across the grid? Particularly when it comes to the the four parts categorisations previously described in this column?

“We obviously want to see, as an independent constructor, anything that is a performance differentiator [as being included in the list of parts we need to design ourselves], because that’s the DNA of our sport.

“When it comes to standardisation, I think [where] it makes sense financially and the teams currently may or may not do these [parts] themselves, as long as it is not detrimental financially to a team, I think that’s a good thing.

“With standardisation and standard parts we can go and buy off the shelf, if they’re not performance differentiators, then it doesn’t make sense to spend hundreds of thousands or millions on certain components in our race cars.

“So, I think if there’s sensibility around those four [parts categories], then I think that we would be happy.”

The wider question of Formula 1’s sustainability – the environmental aspect – is one Williams clearly has given much thought to. “We need to be very careful moving forwards with some decisions that we take,” she opens.

“We don’t talk enough about what we have done to make this sport greener. That is the image, isn’t it? It’s people thinking Formula 1 is a gas-guzzling sport, and we haven’t done enough to stamp out that image and actually talk up the real positive steps forward that we’ve made, particularly [with] these new power units.

“Hundreds of millions of dollars have been invested into them, the technologies within them will filter down into the road manufacturers. We don’t talk about them and we should.”

She provides a topical example: “One of the conversations on the table at the moment is refuelling. I don’t see how that does not completely contradict and take us 10 steps backwards from what we are looking at trying to promote this sport and the virtues of F1 from an environmental perspective.”

As for the future of her family’s team it’s clear that – listed company or not and notwithstanding its present difficulties – she believes totally in its future.

“The Williams family have never taken any profit out of our racing team; it all goes back into it. Every single penny that we have goes into F1, and it’s our mission now, moving forward, to ensure that we tackle those areas potentially that we have across the business that we need to improve.”

With George Russell’s bravura performance in Hungary last weekend, and Robert Kubica’s breakthrough point the week before that, perhaps the first signs of that improvement are begin glimpsed.

40 comments on “Exclusive: Why Claire Williams is “really excited” about the future of F1’s last-placed team”