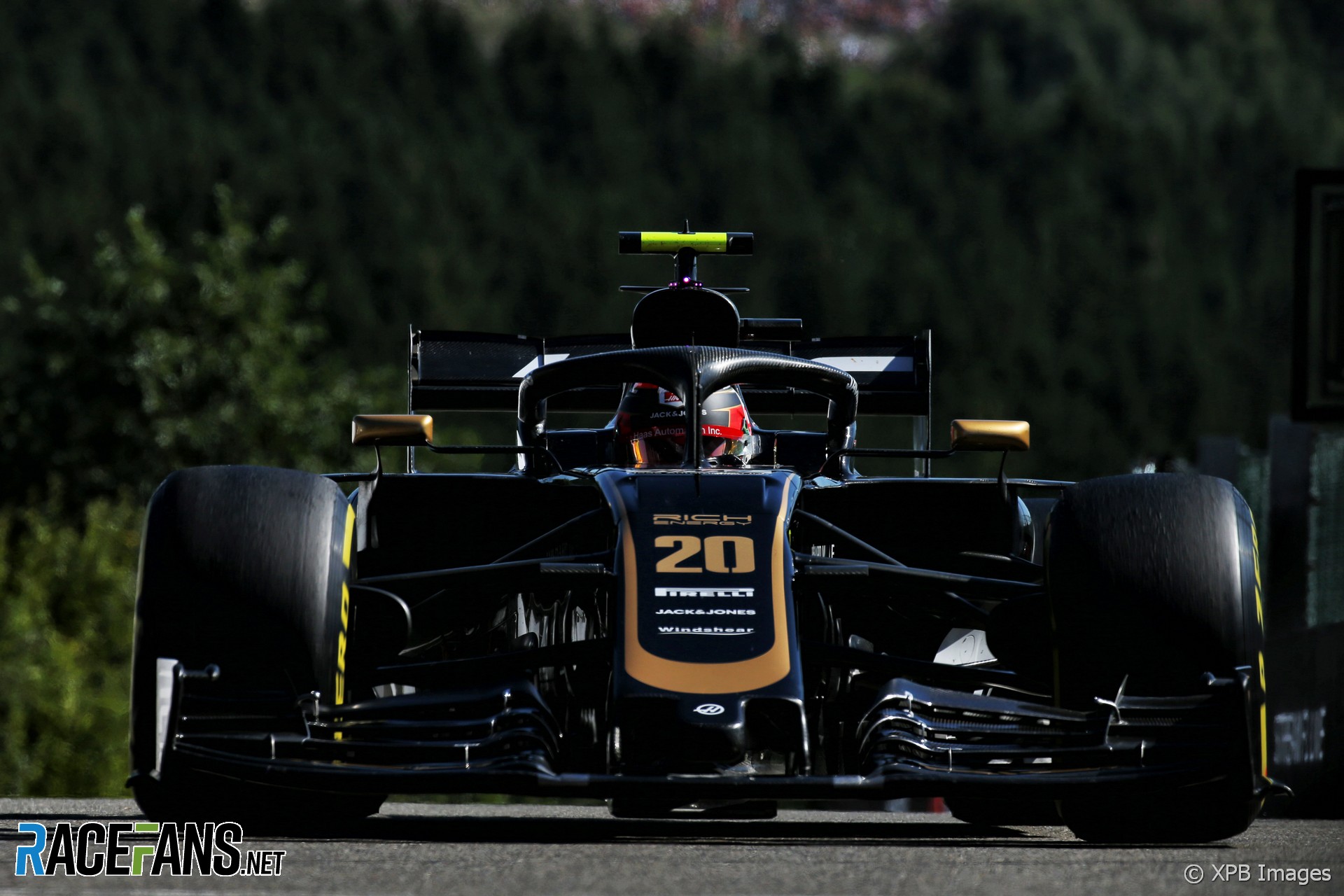 In the round-up: Kevin Magnussen says Haas are simply unable to make their tyres perform at Spa.

Magnussen said the marks from the tyre moulds are still visible after several laps of running:

A difficult day for us. We’re not making the tyres work at all. It’s basically like plastic tyres. They’re just not being used, after seven, eight laps, they’re still completely new and you can see the line from the mould when they were made. Just not using it at all.

It’s very tough to go anywhere from there when the tyres are just simply not working, not suiting our car for whatever reason. It’s tough. Downforce-wise we’ve been up and down a little bit today to try and pursue the right level.

I’ve not got the hydraulic suspension this weekend, that makes a big difference on this track so with the tyres being so on the limit it’s also not ideal having to go less downforce. It’s a little bit of a difficult situation, we’ll see if we can manage.

You really do see everything @circuitspa A couch on a picker raised up to see the circuit!!! 😂😂😂 10/10 for imagination 👏🏻 #BelgianGP #F1 #imagination pic.twitter.com/uSsre3uHTz

Check out these pictures of the new #EFOpen car, the Dallara 320, making its track debut in Italy 🕶☉🏎 pic.twitter.com/LReYxmTJkn

From Grosjean's words it increasingly seems he expects to be somewhere other than Haas next year. #F1 #BelgianGP pic.twitter.com/hBEFwo2pBE

Starting off on the right leg (Alfa Romeo)

"Thanks for asking about my leg: It’s okay. Beside this I’m not overly happy with today. The lap time is okay, but we have a lot of work to do with the set up of the car and I really believe, if we get the balance right we can improve tomorrow."

Jonathan Eddolls: "We’re pleased to be working with Pierre again, we worked closely with him last year and he has tremendous speed, so we’re looking forward to maximising his performance in the second half of the season."

James Allison: "The car balance was a bit too much towards understeer this morning and the track surface here is quite a rough asphalt, which makes it pretty demanding on the tyres if you don’t have the car’s balance correct. That hurts on both the single lap and the long runs because you can’t keep the goodness in the tyres if the balance isn’t there. It will be small changes that we’re looking for but there’s nevertheless some work to do overnight if we want to pick up where we left off before the summer break."

"Jimmy became a global person. Scotland’s greatest export is our people, and Jimmy was part of that, taking motor racing to a new audience"

"Nyck de Vries delivered on his free practice form with pole position in FIA Formula 2 qualifying, to strengthen his grip at the top of the driver’s championship and set himself up for a potential fourth win of the season."

Daruvala back on form with pole in Spa-Francorchamps (F3)

"Jehan Daruvala scored his first pole position of the season with a scintillating late tour of Spa-Francorchamps in today’s FIA Formula 3 qualifying. The Prema ace was the best of a late sprint to pole, beating out Trident’s Pedro Piquet and Jenzer Motorsport’s Yuki Tsunoda."

"And the Toyotas have received additional weight since Le Mans too, they now sit at 932kg, 14 kilos up from Barcelona’s Prologue test, which was itself 14 kilos up from the final round of last season."

"I want to stay in IndyCar and win races and championships. That’s my target. I wouldn’t commit to this level if I didn’t want to do it all the way. You need to learn, and I’ve had a year now to get the basics. Next year it’s time to put it into the next gear."

Dan Ticktum: "I have driven all types of single-seaters and for me, like for many drivers, my preferred racing car is the Dallara F312/317. After this first test with the new 320, I am glad to say that Dallara has achieved to make an even better car."

Would testing a new race or qualifying format as a one-off give any useful information?

I think one of the main problems of testing formats for one or two races is that two races is not a meaningful sample to draw definitive conclusions from. Look at the last eight races we’ve had – four were dull as dishwater and four were absolute belters. There are a tonne of variables that determine how ‘entertaining’ a race is. The last time they saw one good race and decided to make all races like that was Canada 2010 – and that gave us around seven years of designed to degrade tyres, which had mixed results at best in terms of entertainment.

That’s not to say they shouldn’t test different formats, but there are definitely dangers of drawing too many conclusions from them. I’d probably say I’d rather they test formats more in lower formulae, rather than experiment with F1 which is supposed to be the ‘pinnacle’ of motorsport – although that may also be unpopular with fans of those formats.
Keith Campbell (@keithedin)

15 comments on “Magnussen: Our tyres look unused after eight laps”