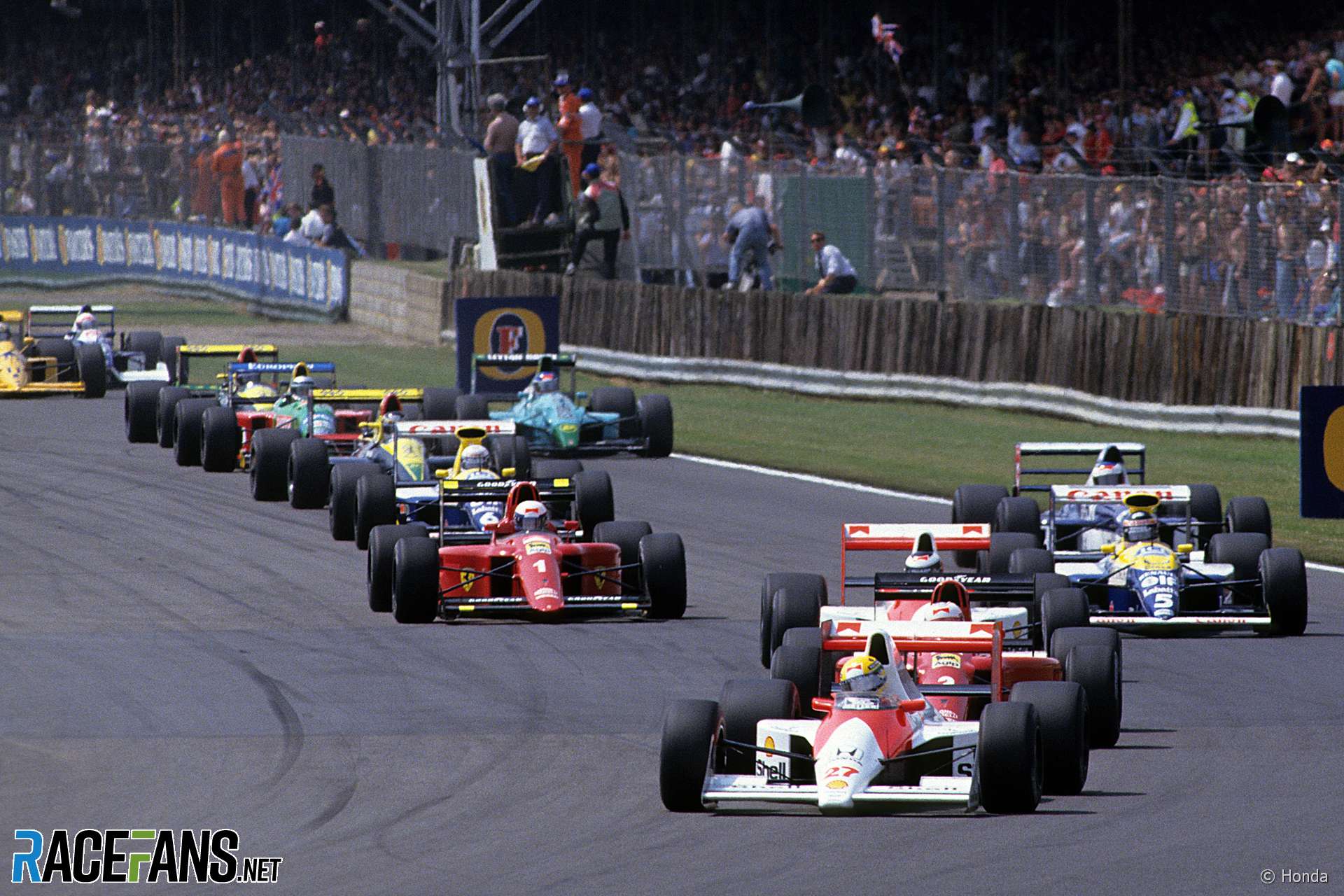 Back in 1990 David Hodges, a prolific author with numerous motoring titles to his name, published the A-Z of Formula Racing Cars 1945-1990. The dates are telling for the last decade of the last century saw the decimation of a once-flourishing single-seater race car industry on both sides of the Atlantic, plus various off-shoots in other regions.

The book lists almost 1,000 different chassis makes. Not all makes were successful – commercially or on-track. And not all were proprietary brands, with some being home-made one-offs, usually named after their intrepid builders or wives or daughters thereof.

Some of their names were simply amalgams of various initials, while some Germanic contraptions were listed as ‘Eigenbau’, meaning ‘self-built’.

A handful of the constructors passed into history: BRM, Cooper, Brabham, Lola, Lotus, March and Matra. Others – like Eifelland, Maki or Politoys – are largely forgotten, despite having competed at the highest level.

The book lists not only F1 makes, but constructors who participated in other single-seater series, wherever. If just 30 per cent were genuine contenders in their various categories, that still makes for 300 over the years in various categories. An appendix details the international categories they contested – seven ‘Formulas’: 1, 2, 3, 3000, 5000, Junior and Intercontinental – and CART/IndyCar adding an eighth.

Many started as self-build projects and, as they scored successes on-track, so orders for replicas flowed in. Colin Chapman (Lotus), Eric Broadley (Lola) and the father-son team of Charles and John Cooper started thus, as did Peter Sauber in Switzerland and many others. As their businesses grew, so did their ambitions, and eventually they reached F1.

But such career paths are now all fundamentally closed to budding team owners.

Fast forward thirty years, and the number of proprietary chassis manufacturers can be counted on the fingers of one hand: Dallara, Mygale, Tatuus, Dome and Crawford. Add to that the 10 F1 constructors and in 30 years the 300 has dwindled to 15, with most disappearing during the nineties.

Tellingly there are, though, still around eight international categories: F1, F2, IndyCar, Super Formula, various F3 iterations and numerous F4 series – all of which points to big business for three proprietary chassis manufacturers.

The largest is Dallara, which produces up to 150 single-seater chassis per year. By some estimates every weekend some 300 Dallara chassis compete somewhere across world. The company employs 750 heads at its factory outside Parma, its newest recruit being former Mercedes designer Aldo Costa. Dallara holds about 50 per cent of the customer race car market, with the balance spread across four main competitors, who mostly produce lower-end feeder-series cars.

Dallara virtually has the top end – F2, F3 and IndyCar, plus sports cars – to itself, producing cars or kits in Italy, USA and Japan. It is, though, a cyclical market, depending on the maturity of various categories, being crucially dependent upon contracts to supply single specification chassis for the FIA’s various single-seater categories.

Gain a tender and production flows, then slows as teams no longer update each year due to the nature of the beast.

All this has, though, impacted massively on the current state of Formula 1, for junior teams are no longer engineering operations but assemblers of proprietary kit. True, race craft is still involved, but the days of honing race cars to pitch perfection are over, for F2 and F3 regulations now demand that teams run what is supplied. Substitute something as mundane as a washer for a non-proprietary item, even one of the same dimensions, and a costly exclusion follows.

Equally, renowned F1 engineers such as Gordon Murray, Rory Byrne, John Barnard and Adrian Newey came up through the ranks to F1 via feeder (or other) categories, while current F1 boss Ross Brawn began his career as a milling machine operator before joining the March F3 team as mechanic and F1 Technical Director Pat Symonds learned the ropes at Royale, designing Formula Fords and suchlike.

Such formative experiences are now closed to budding race car designers. It’s little wonder that few real ‘name’ designers have emerged over the last decade or two. Indeed, Rory Byrne still provides input to Ferrari despite having officially retired over a decade ago, while Newey delivers the class of the grid almost 30 years after formulating his ground-breaking Williams FW14B.

True, today’s budding F1 engineers could join a Dallara or Dome, but their customer chassis are built to price not performance and lack cutting-edge technologies, for the overriding criterion in their design is that drivers have equal kit. Testing is no longer the development exercise it once was for engineers, but a driving test.

That is not to denigrate engineers in such operations, for producing a car to a price is as challenging as delivering peak performance – the skill sets are merely channelled in different directions – but should the engineer ever make it to F1, the priorities are suddenly up-ended.

Equally, youngsters could join an F1 team, but so specialised are design activities now that they could spend year-in, year-out perfecting a single aspect of a car rather than designing a total car.

As Jody Scheckter related in his exclusive interview published here last week, in 1977 start-up Wolf had a total staff complement of 20 to design, develop, build and race its WR01, yet the team won its first race; today, outfits such as Mercedes and Ferrari employ over 400 engineers on design alone.

Recently I spoke to a design engineer who left F1 to work for a customer chassis operation, and he soon became disillusioned and returned to F1, for he dearly missed the intense challenge of technical competition.

“Not only that, but in the year I was away I lost touch with the latest developments,” he explained, “and I realised I had become professionally stagnant. The longer I stayed away, the more I stood to lose in the long run,” adding that the advances in composite technologies during his gap year were “simply staggering.”

Equally, current F2 teams have no need to visit wind tunnels or simulators, let alone rent or acquire them, as was once the case. Nor do they need to accumulate banks of CNC machines or clean room equipment and composite ovens for manufacturing purposes, for their race shops are just that – preparation bays, with most assembly work undertaken at the circuit.

Thus, the leap to F1 is of quantum proportions, facilities-wise and financially, and that is even before manpower is factored into the equation. When Eddie Jordan made the move his gearbox technician Andy Stevenson went along for the journey. Almost three decades and four changes of team name later, Stevenson is sporting director at Racing Point.

The last GP2 outfit to attempt the move – under subsequently-aborted plans for a $40m budget cap regulation, at that – was Campos, which collapsed in a pile of difficulties even before reaching the F1 grid. Once bailed out by wealthy investors it lasted all of three years (as HRT) without scoring a point.

Even the smallest F1 teams may employ more engineers than all the F2 teams combined. This is a worry for the future for, with doors increasingly closing to junior race engineers, the sport may find a dearth of them in future. Formula E, too, relies on specification chassis, and while the challenge is on for electrical boffins, the chassis side is all but closed to development. Again, Dallara has that contract.

It is hardly coincidental that specification chassis began flourishing at the start of the ‘commercial rights era’ – no sooner had Bernie Ecclestone and his merry co-team owners wrestled commercial control of F1 away from the FIA during the early eighties, than they devised F3000 as an outlet for their unused Cosworth 3.0 DFVs, made redundant by the switch to turbo engines.

As time progressed, so the commercial rights holder grasped the revenue opportunities presented by a monopoly on specification series cars, with the aftermarket proving even more lucrative. Not even those washers are free…

Originally, chassis and tyres were open to competition. March, AGS, Reynard, Lola, Dome and Footwork all competed to greater or lesser extent and, saliently, all had F1 projects at some stage. Team owners Pacific and Jordan both entered F1 in their own rights.

Stewart provides another example of a team incrementally moving up the ladder: between 1988 and 1996 the team raced in junior categories including F3 and F3000, winning 12 titles and 119 races. In the process the team run by Sir Jackie and son Paul acquired the necessary infrastructure and expertise for an F1 entry in 1997, landing on the podium within five races and scoring a grand prix win in 1999. The team is now Red Bull Racing, so we can hardly fault the quality of the foundations they built.

However just over a decade after F3000’s 1985 inception the category switched to regulation Lola chassis. Not one of the subsequent six championship-winning teams making the switch to F1. Not so coincidentally Ecclestone was negotiating F1’s commercial rights for his own account, and F3000 joined the support race bill.

West Competition – champions in 1999, and operated by McLaren – was obviously a feeder category for the big time, while Christian Horner cut his team boss teeth with Arden before moving to Red Bull Racing, as did RSM owner Helmut Marko.

In 2005 the series transformed into GP2 – with even more stringent standardisation – and was eventually acquired by F1’s commercial rights holder, where it resides today.

More recently Frédéric Vasseur, owner of ART – which won the 2005/06 GP2 title – moved up to F1 with Renault before transferring to Sauber, while former Lotus/McLaren racing boss Eric Boullier headed to F1 from DAMS in GP2. Crucially, though, their respective junior teams did not follow them.

F1 therefore faces a dual conundrum: A lack of incoming junior teams either to expand its thin grid or fill any breach created by teams which may depart; and limited opportunities in the junior categories for budding engineers. How to solve this?

During a recent visit to Lamborghini, where I was hosted by CEO Stefano Domenicali (ex-Ferrari team principal), I put the question to the personable and highly capable Italian, who doubles as president of the FIA’s Single-seater Commission.

While being acutely aware of the challenge, he believes F1’s pending budget cap regulations could provide the solution by freeing up cash, human resources and facilities which would otherwise be lost to the sport. These could then be invested in junior categories, where talents could be grown.

“I think that now with the new constraint, the new situation, we can address that in the other way around, so moving from the top down,” he explained.

“I believe that with the idea of having this budget cap approach we can now have resources that a [F1] team can dedicate to a smaller series, the possibly for [junior] drivers to be followed, for mechanics to be trained, for management to be trained, and engineers to be trained.

“So, I can see that as a potential [method] to keep the ladder and to integrate the whole system by turning the current system upside down.”

Still, ‘turning the system upside down’ would not solve the fundamental issue of attracting incoming F1 teams, for the team owners would be moving down-stream, not up the ladder, as did Stewart and Jordan and others.

So, while Domenicali’s concept certainly addresses some of the short comings of the current system, it is of little consolation to the Colin Chapmans and Gordon Murrays of the future, who would still find their creativity stifled by specification series. Ironically, for an antidote they would need to turn to the bottom rung of single-seater racing, namely Formula Student…

35 comments on “Where have all the single-seater race car builders gone?”