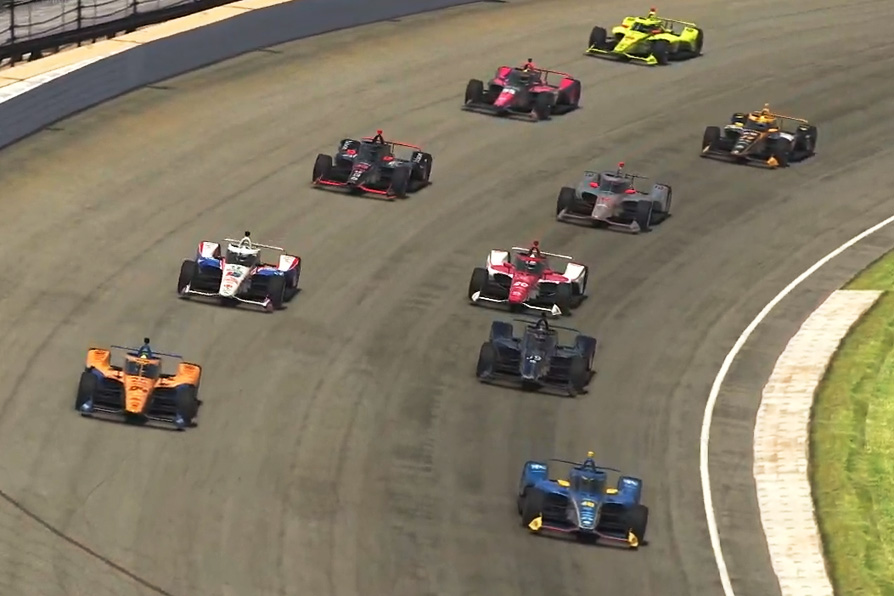 A crazy end to the IndyCar iRacing Challenge at Indianapolis saw Scott McLaughlin snatch the win on the line after Santino Ferrucci crashed into leader Oliver Askew.

“That’s my bad and I’m sorry for doing that to Oliver because that was definitely his race there,” said Ferrucci. “But also at the end of the day it’s a video game and I think we all had fun and coming to the line, it’s the kind of thing you’d never do in real life.”

Ferrucci and Askew had taken over the lead after Askew’s McLaren SP team mate Pato O’Ward collided with Marcus Ericsson while making a risky bid to pass his rival at the final turn. O’Ward later apologised to his rival on social media.

The pair had inherited the lead on the previous lap after Lando Norris ran into the back of the lapped Simon Pagenaud. Norris spoke to Pagenaud following the race and said his rival admitted he tried to slow Norris down but didn’t want to take him out.

It made for a dramatic conclusion to a race which had begun cleanly. Only one caution occured over the opening 50 laps. The first caution period was triggered on lap five when Alex Palou clattered the pit wall, then was hit from behind by Tony Kanaan and Jack Harvey at turn one.

When the race restarted Scott Speed took over the lead, holding a dogfighting Graham Rahal, Will Power and Lando Norris at bay, and Sage Karam lurking in fifth. But on lap 13 Speed ran wide after Power dived to his inside. Rahal also slipped back, leaving Power and Norris to dispute the lead.

The pair pitted together on lap 33, Norris losing five seconds while “mandatory repairs” were made to his car. However he lucked in during a later caution period as he had already pitted for fresh tyres, which allowed him to pass Pagenaud for the lead.

The Penske driver hit the wall, which put Norris temporarily in the lead of a McLaren one-two-three with Askew and O’Ward. That changed when Norris came around to lap Pagenaud.

The final-lap drama saw pole sitter McLaughlin snatch the win while Conor Daly snatched second as Ferrucci and Askew crashed across the line behind him. O’Ward recovered for figth ahead of Sebastien Bourdais ,Ryan Hunter-Reay, Zach Veach, Felix Rosenqvist and Scott Dixon.