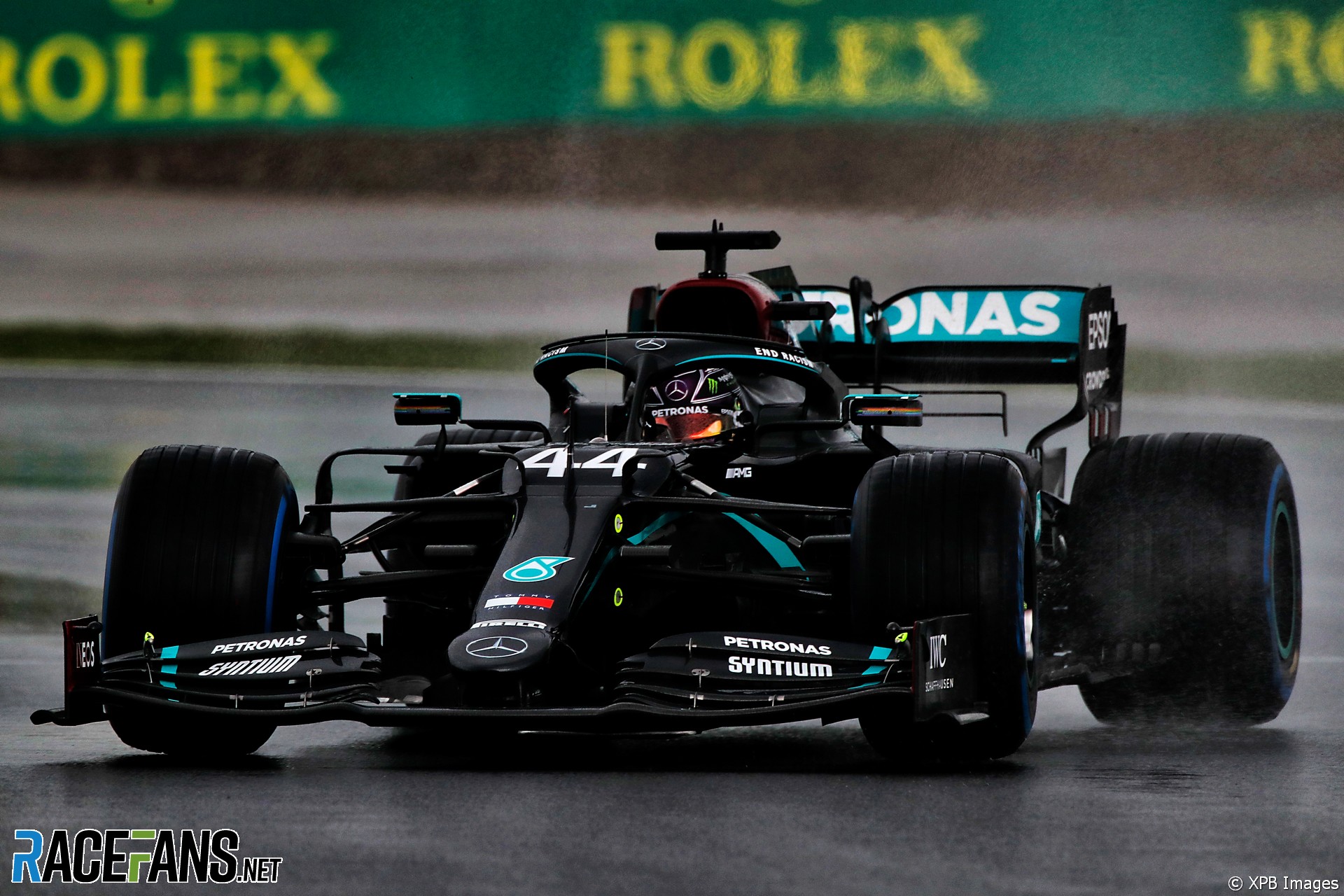 Mercedes’ unbeaten run in qualifying this year came to an end in an extraordinary qualifying session at Istanbul Park.

The clue to why the W11 was beaten lies in the staggering scale of the team’s first defeat of the year – a whopping 4.5 seconds slower than a car powered by the same engine.

Earlier this year in wet conditions at a more typical circuit – the Red Bull Ring – Lewis Hamilton put his Mercedes on pole position by 1.2 seconds. The 10 Q3 contenders were covered by 2.3s.

To put that in perspective, in the same wet qualifying session at the Red Bull Ring the entire field was covered by just 3.6 seconds in Q1. Even allowing for the slightly shorter lap at that circuit, this illustrates how bizarre today’s qualifying session was.

We saw extreme over-performance: Racing Point, who posted their worst result performance of the season last time out, claimed first and third. The counter-point to that was the extreme under-performance of Mercedes.

The W11 couldn’t generate enough heat in its tyres, and the problem became worse with each passing lap, as their head of trackside operations Andrew Shovlin explained.

“We’re just too cold and that means we’ve got no grip,” he said. “But the issue is it becomes a bit of a vicious circle whereby if you haven’t got the grip, you can’t generate the temperature and you spiral down.

“When you look at the gap between us and pole and [Racing Point], how quickly they could bring the tyres in, you’re talking seconds and seconds. When you’re diagnosing problems, gaps that big can are always linked to tyre temperature unless you’ve got some pretty major parts that have fallen off, but it’s almost always tyre temperature. So there’s a bit to learn.”

Shovlin said Mercedes’ priority in recent years has been to cope better with higher temperatures. The extreme conditions at Istanbul Park suggested that has blunted their edge when the conditions are very cool – not to mention wet and slippery.

“I think we’ve developed our car to be good in hot conditions,” said Shovlin. “That used to be a weakness. We need to be able to adapt when the conditions are certainly very, very cold and we haven’t done that very well. And there’s no doubt a fair chunk to learn from today.”

The W11 worked better in the rain in Austria because the temperatures were higher. “What you want on a day like today is a car that overheats it tyres, that sort of kills them at most circuits, and suddenly you’re into a into a good place,” said Shovlin.

“So it’s no big surprise why we were necessarily good there. It’s just the shock was being seconds off a Racing Point, seconds off a Red Bull, that’s the thing that has surprised us. But we do understand enough about the tyres to know how you can get yourself in that position.”

A significant question mark hangs over the likely conditions for tomorrow’s race. But Mercedes are concerned they may not be particularly competitive come rain or shine.

“It is difficult to predict. I think if you’re looking at a wet race, the thing that we need to do a bit of head scratching about is how do we get the tyres to switch on quickly. Because you just look at our lap times over a two or three lap run today and you look at what, for instance, Stroll was doing in the [Racing Point] at the end, he will be 10 seconds up the road in no time.

“So that’s one of the biggest issues for us if we can’t get the tyres to switch on. Now, because of the change of climatic conditions that we get it when it’s wet, we can make changes to the level of heating that you’re putting into the car. So there are some things we can do.

“But that’s the big thing that’ll probably keep us awake tonight is that idea that you’re just getting swallowed up by the pack and the leaders are sprinting away and you can’t match their pace. I think eventually we’ll get there because we have shown that we can generate temperature, it just takes us a long time.

“Looking at a dry race, though, the wet and the dry is not very different here. It’s the same issues: low grip, balance, generating temperature. The problems are identical, which isn’t the case at most circuits. So we’re really trying to solve similar things.

“But the worry with the dry tyres was while they were difficult to get to switch on they were also wearing and you saw a few people complaining of graining. And as the circuit changes in grip level the severity of that will also evolve.

“So it’s a case of get the car to work, that’s the number one thing, but also we haven’t really got a lot of information on what the tyres are going to do, how far we can go, what our relative pace is. So as well as needing to fix the fundamentals of the package, we’ve also got this lack of info and a lot of problems that we’re going to try and be getting on top of during the race.

“Plus the fact we’re not we’re not used to starting so far down in the pack. So if we are quick enough we’ve got people to get by to think about, and strategy, how to try and get ourselves into a position where we can hopefully cause a bit of trouble for Red Bull.”

For a team which has won so many races and usually plays a cautious game of ‘expectations management’, it’s tempting to roll your eyes at this and predict they’ll be leading by lap two. Perhaps they will.

But on the strength of this, it seems this weekend’s highly unusual conditions have created another ‘Singapore 2015’ scenario for the world champions. If nothing else, it means the record of scoring pole position at every race in a season remains unclaimed.