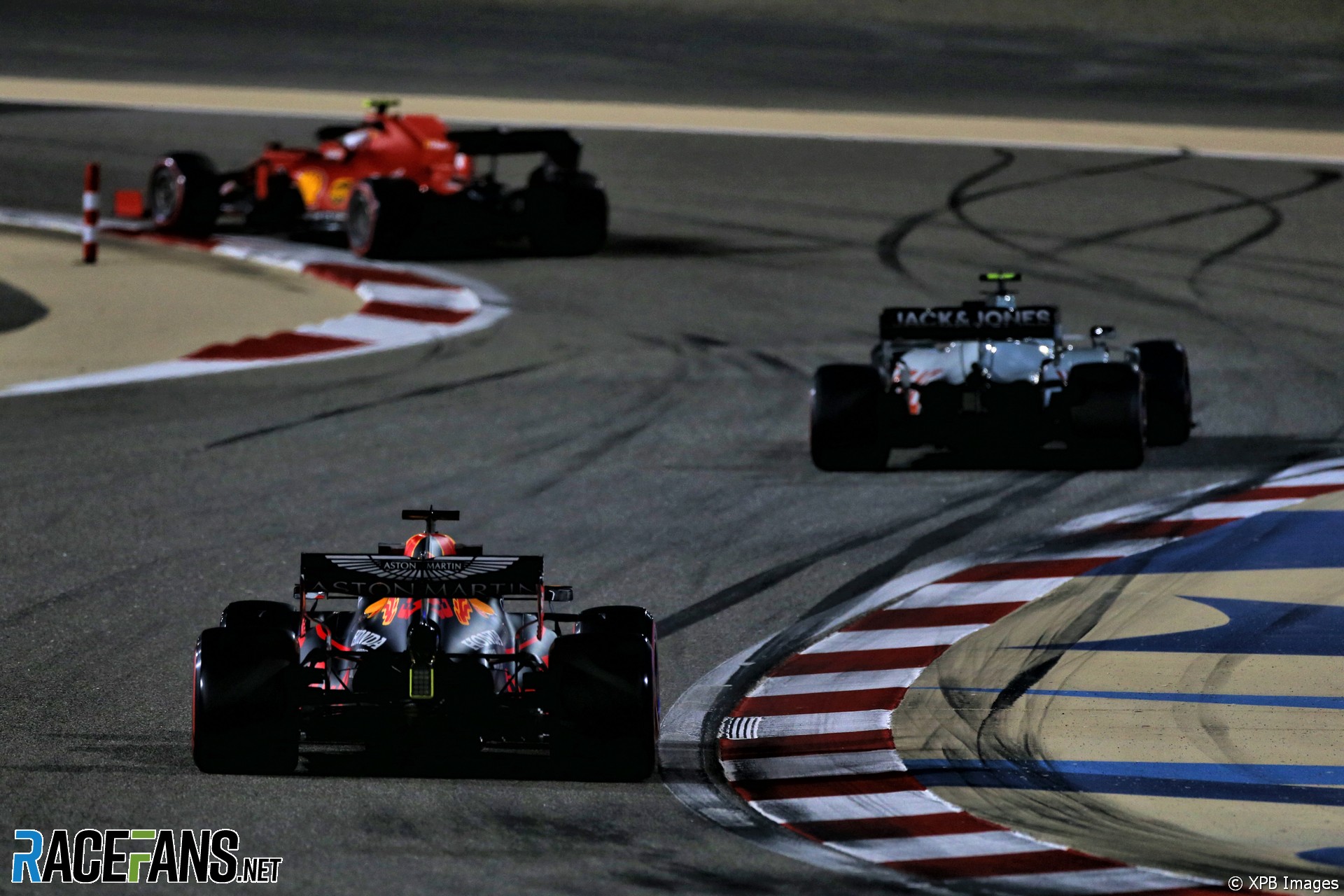 The top 10 in second practice were covered by just over half a second. Lap times are tight around Bahrain’s 3.5-kilometre ‘Outer’ circuit.

A moment’s loss behind another car could make a huge difference to a driver’s starting position. And with traffic expected to be a serious headache in qualifying, especially Q1, that is a very likely scenario for Saturday which is already raising concern among the drivers.

“I think it’s going to be really important to get clear laps,” said Valtteri Bottas. Between F1’s two sessions he kept his eye on a hectic Formula 2 qualifying half-hour, which ended with Mick Schumacher and Roy Nissany crashing into each other.

“I think F2 gave us a great example of how messy it can be at the end of the qualifying,” said the Mercedes driver. “So we need to prioritise the gaps.”

Laps times were predicted to be around 55 seconds at the Bahrain Outer circuit and the first two practice sessions at the Sakhir Grand Prix have proven that right. Only the Red Bull and Mercedes cars were able to dip into the 54s in first practice but after the second session Sergio Perez and Esteban Ocon had joined them.

The outer circuit at Sakhir is only 3.543 kilometres long, meaning when all 20 cars come out there are almost immediate traffic problems. Max Verstappen was particularly vocal on the matter on his radio and after the session too.

But a glance of the track map during most stages of today’s session showed just how crowded it really was. The sequence of turns from four to nine, in particular, come very quickly. Jack Aitken sounded like he was simply listing the corners rather than driving through them on his radio check during first practice.

McLaren team boss Andreas Seidl was one of many who pointed out how important traffic management will be in the upcoming qualifying session, and the race.

“I think the most critical thing is probably the traffic management in qualifying,” he said. “Making sure we don’t repeat the topic of blue flags in the race will be a challenge as well.”

For the teams that should make it into Q3 easily, such as Mercedes and Red Bull, it should be possible to do so on the medium tyre compound, based on the times set at the start of second practice today. With gaps so small between the times over the top 10, it could be risky, but the short lap should at least afford them several chances to set times.

It would be a hard guess to predict which teams other will make Q3 at this stage. Almost the entire midfield could, on the right tyres, with a bit of luck in traffic. Times were very tight on the soft compound, qualifying simulation runs and getting free space will be critical, as will team mates potentially helping each other with slipstreams on the pit straight.

“I can imagine that we have a similar situation to last weekend with some teams trying to qualify on the medium tyre,” said Pirelli’s head of motorsport Mario Isola. However the narrow gaps between teams due to the shorter lap (see graph below) may force them to opt for the soft tyre.

“Some of them are probably obliged to qualify on the soft,” Isola continued. “That is not too bad, I believe, because the soft is working better, with this layout. There are less traction and braking demands because of the long straights that are covering most of the lap and so the soft probably could be a good option for the race.”

Between today’s two sessions race control advised drivers of new restrictions on track limits at turn eight. This was where Bottas had not just his fastest lap, but also five others, deleted for running too wide. He was the most prolific offender, followed by Alexander Albon (four) and George Russell (three).

The disastrous effect of a good lap deleted was show by Bottas, in particular, who would have taken the fastest time of second practice but for his qualifying run being one of the laps nixed. Without an opportunity to get another clear run, he was forced to settle for being classified 11th – frustrating, no doubt, in practice but potentially disastrous in qualifying.

The usual Mercedes pace advantage may be reduced by the short lap, though the high proportion of the lap spent at full throttle will undoubtedly favour the team with F1’s best power unit. Russell’s inexperience in the car and the damage Bottas incurred in first practice will be masking some of their performance. They have an eye on Verstappen’s race pace, however, and all may not be lost for Red Bull if they can beat the Mercedes customers to row two on the grid.

Gaps between teams on Friday