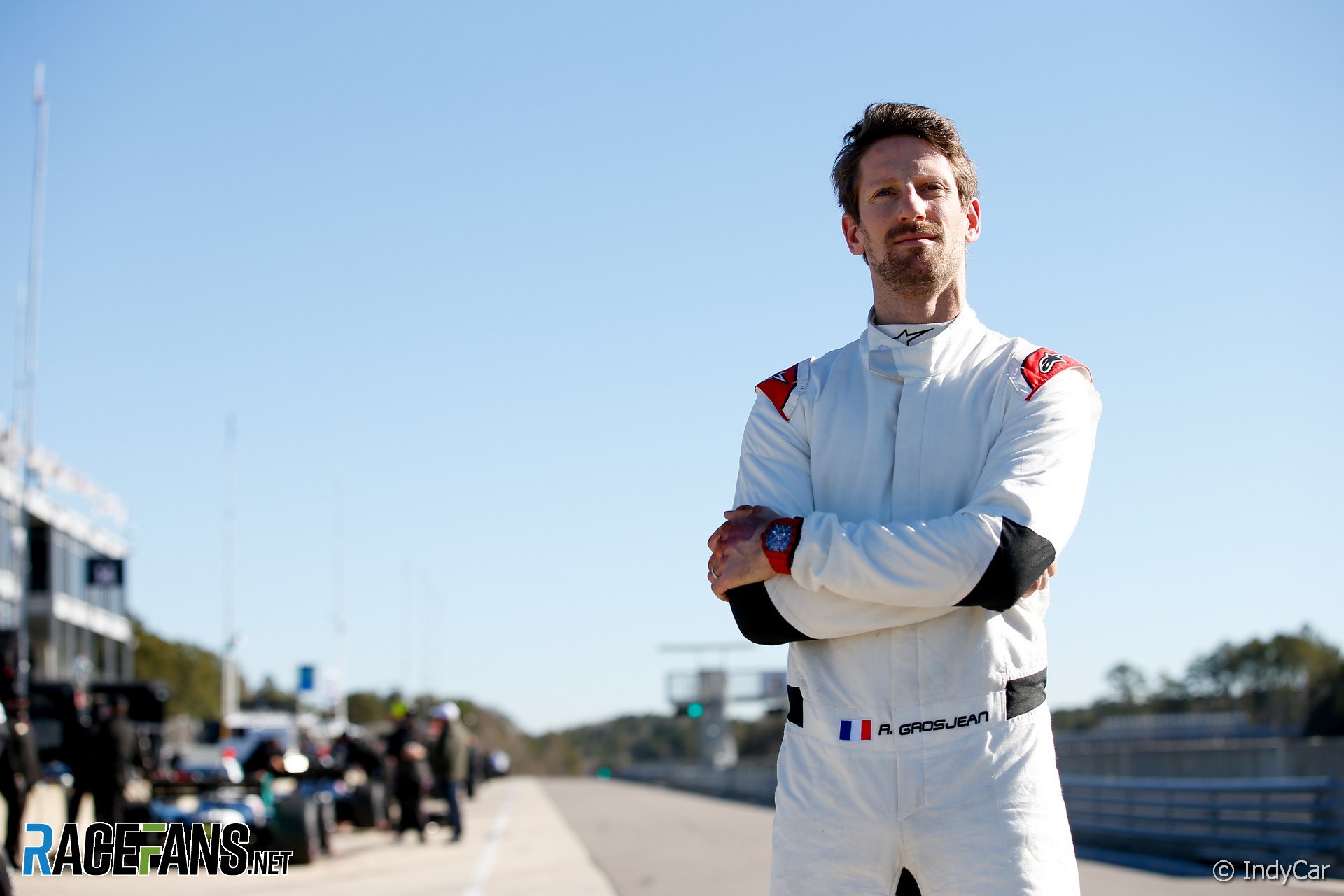 The first question Romain Grosjean had to address when he returned to action this week was whether he had recovered sufficiently from his horror crash in the Bahrain Grand Prix to drive at the limit again.

The burns on his left hand, which prevented him competing in what would have been his final two F1 races last year, are still healing. The injury caused him some pain during his day of running at Barber Motorsport Park this week, preparing for his coming IndyCar deut, but Grosjean said he was able to drive well enough.

“It’s been alright,” he said. “I’ve got a big blister on the left hand, on one of the thumbs, but I didn’t really feel it in the car.”

“Putting the gloves on and removing it is not always nice so I tend to keep my left glove on,” he added, “to protect it from the sun, as well. But generally it’s been okay.”

He said the test gave him a “clear idea” of where he needs to work on his physical fitness as he makes the transition to racing in America.

“I’m going to go back in the gym and make sure that the muscles are good,” said Grosjean. “[But] you can do as much as you want in the gym – the real race, the real training, is in the car.

“It’s good that we did 80 laps. It gets the proper driving muscles active. I wanted to do some shifter kart back home because I think a shifter kart could be good training, but with my hand and core temperature I wasn’t able to.”

The physical demands of driving an IndyCar is one of the most significant challenges Grosjean has to confront. In terms of outright performance the Dallara DW12, now in its 10th year of service, is a step below the Formula 1 machines Grosjean is used to in terms of outright performance. But IndyCar racing is more demanding in other ways. Its tracks are generally bumpier, narrower and less forgiving of mistakes than F1’s, and the cars do not have driver aids such as power-assisted steering.

Grosjean admitted “I don’t regret all those hours in the gym” after he “discovered the joy of not having a power steering wheel” around the short, twisty and undulating Alabama course which will host next month’s season-opening race.

“It’s very physical,” he added. “It is tough driving those cars, very much in a different way than Formula 1. The only thing you fight in Formula 1 is the G-forces. Here you actually fight the heaviness of the car physically. But I don’t mind it, it’s quite cool.”

However the veteran of 179 F1 races was pleased by the different handling sensation in the less aerodynamically-sensitive IndyCar.

“If I’m being simplistic, Formula 1 only works as aerodynamics and the rest is just here to support the car,” he explained. “An IndyCar works really with the set-up. The aerodynamics is much simpler, there’s much less downforce. So high-speed corners are a bit more fruity in an IndyCar but the low-speed corners actually feel maybe better.”

Trying to transfer Formula 1 cornering techniques to IndyCar do not always work, Grosjean discovered, as his car got away from him early in the test at Barber’s quick left-hander turn one.

“Every time you come testing you have to try to find your limit, which I did in turn one,” he explained. “I wasn’t quite happy with it, but it happened, and I actually understood something you could do in Formula 1 you maybe cannot do in IndyCar, so actually that was kind of a good learning experience.”

The rest of the day’s running was spent learning the set-up options available to IndyCar drivers, which are more limited than those in F1, and getting to know the Coyne/Rick Ware team.

“It was really learning about when you change dampers or the bars or something, what does it actually do on the car, how does it affect the car, which part of the corner. Also getting to [know] my engineer and him to learn me and what I’m talking about on entry, which phase of the corner am I talking about and so on.”

Moving from F1 to IndyCar means swapping one single-specification tyre supplier for another: In this case, exchanging Pirellis for Firestones. While Grosjean had been critical of F1’s rubber in the past, he described himself as “very pleasantly surprised with the Firestones”. Unlike their F1 counterparts, these have to work straight out of the garage with no pre-heating, as tyre warmers are banned.

“They’ve been great,” said Grosjean. “No tyre blanket, going out of the pit. Okay, it’s a bit more slippery but there is grip, and you can actually push for a few laps and they stay quite consistent. I was doing good laps after 25, 26 laps on the tyres and that’s something that I couldn’t do in my previous experience.”

IndyCar’s road and street course compounds – the only rubber Grosjean has to concern himself with as he won’t race on the ovals – come in two specifications. These are the harder, black-walled ‘primary’ tyres and softer, red-coloured ‘alternates’. As in F1, two different specifications must be used per race.

“Generally I’ve been happy with them,” said Grosjean. “Obviously we haven’t used the red sticker ones, so they may degrade a bit more, but definitely the primary tyres were pretty good.”

Another aspect of Formula 1 Grosjean previously criticised – until his crash – was the Halo. He’s now a firm supporter of the device. IndyCar’s equivalent, the Red Bull-developed Aeroscreen, includes a Halo-style structure plus a screen to provide added protection against minor debris. IndyCar drivers discovered this addition made a significant difference to life in the cockpit when it was introduced last year.

“The Aeroscreen removes some air that you get in the car so it gets quite warm,” said Grosjean. “But the other tubes that you have with the helmet air system and also at the front of the cockpit works pretty well.”

Grosjean said he felt “absolutely fine” driving with the Aeroscreen. “If it wasn’t for the air not coming through your helmet and your visor staying clean, you wouldn’t notice.”

An established F1 star jumping into IndyCar will inevitably attract attention and speculation over how competitive he will be. But reading anything into testing lap times at this stage is always difficult. Although Grosjean ended his first test with the slowest time, it was probably more significant that he lapped within 0.9 seconds of the pace setter at his first attempt.

While last week’s test gave Grosjean his first impression of IndyCar racing, he still has plenty more to learn, including the 10 other road and street courses which will be new to him.

“There’s going to be some different tracks,” he acknowledged, “but if you look at Mid-Ohio, Road America, Laguna [Seca], they’re not dissimilar in a way to the tracks that I’ve known. The pavement may be a bit different with some patches on, but again, it gives character to the circuit.