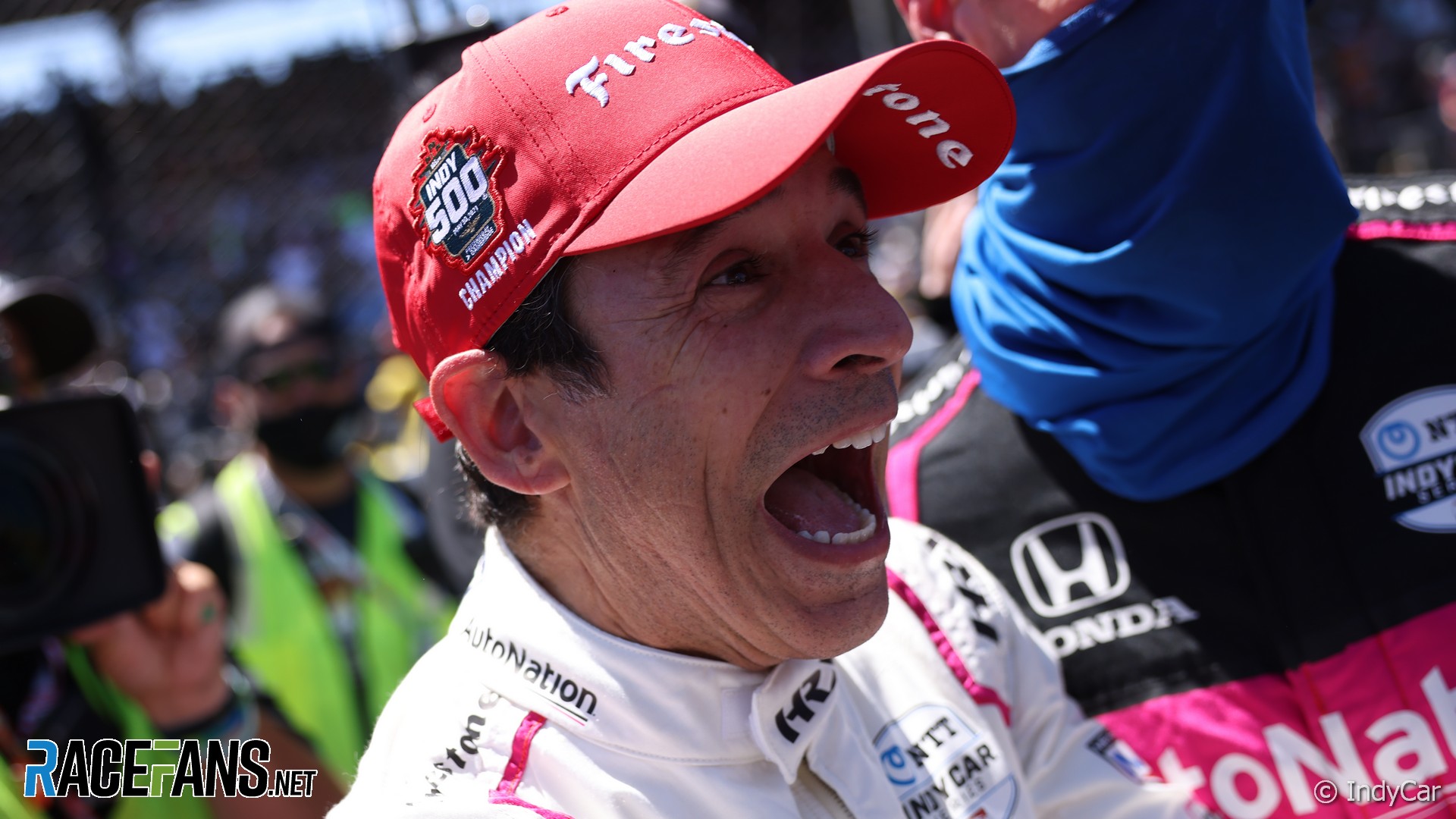 Hélio Castroneves made history at the Indianapolis Motor Speedway, winning his fourth Indianapolis 500 on Sunday to equal the record for the most victories in this historic event.

The fastest Indy 500 in history was decided in a breathless sprint to the flag over the final 28 laps. Veteran Castroneves, back for this race only with Meyer Shank, was locked in a three-way fight with series regulars Alex Palou (Ganassi) and Patricio O’Ward (McLaren SP).

Castroneves and Palou exchanged the lead several times over the course of their final stints. But with just under two laps to go, Castroneves slipstreamed off of Palou down the front stretch and took the lead around the outside of turn one.

As the final lap began, Castroneves and Palou caught a tightly-compressed pack of slower cars. But the three-times winner was never likely to fall victim to the kind of final corner error which memorably claimed rookie JR Hildebrand in this race 10 years ago. He held his nerve and his line to take a landmark victory by less than half a second.

That meant one more chance for Castroneves to climb the catchfence and celebrate with a crowd of over 135,000 spectators, the largest crowd for a sporting event since the beginning of the novel coronavirus pandemic. It meant a flock of rival crew members coming forward to congratulate Castroneves on achieving a record-equalling victory which had painfully eluded him in recent years, most notably in 2014 and 2017.

It also meant a breakthrough victory for his crew at Meyer Shank Racing, who picked up Castroneves as a part-time driver this season after his 21-year run with Penske ended.

Palou, who had looked on course to put one over Fernando Alonso by becoming the first Spaniard to win this race, was consigned to a second-place finish, after leading 35 laps. He finished than a car length ahead of Simon Pagenaud. The Penske driver fought his way from 26th to third, completing one of a number of improbable comebacks during the race. O’Ward took fourth for McLaren SP and local favourite Ed Carpenter, despite stalling in the pits during his first stop, finished fifth.

Two young, part-time drivers quietly and confidently worked their way into the top 10. Santino Ferrucci took sixth after starting 23rd and Sage Karam finished seventh having lined up on the back row. Rinus VeeKay was an early contender for the win, but slipped down into eighth, ahead of two-time Indy 500 winner Juan Pablo Montoya in ninth, and 2013 winner Tony Kanaan in 10th.

Pre-race favourite and pole-winner Scott Dixon went a lap down early on, shortly after Stefan Wilson spun and crashed in the pit lane on lap 32 to bring out the first Safety Car intervention. Dixon’s car ran out of fuel on the way to the pits, and wouldn’t restart.

The second caution period of the race came when Graham Rahal’s left rear wheel came loose after his third pit stop, which sent Rahal crashing into the turn two barrier. The nose of Conor Daly’s car struck the wayward tyre, but amazingly he went on to finish 13th, having leading 40 laps, the most of any driver.

At an average speed of 306.886 kilometres per hour (190.690 miles per hour), this race shatters the record for the fastest Indy 500 in history, previously set by Kanaan in 2013. At the age of 46, Castroneves is the fourth-oldest Indy 500 winner in history, and his fourth Indianapolis 500 victory means he shares the record for most wins in the race with AJ Foyt, Al Unser and Rick Mears.

As he scaled the victory fence, and danced along the edge of the track celebrating with fans, it was hard to imagine he won’t return to pursue a record-breaking fifth.