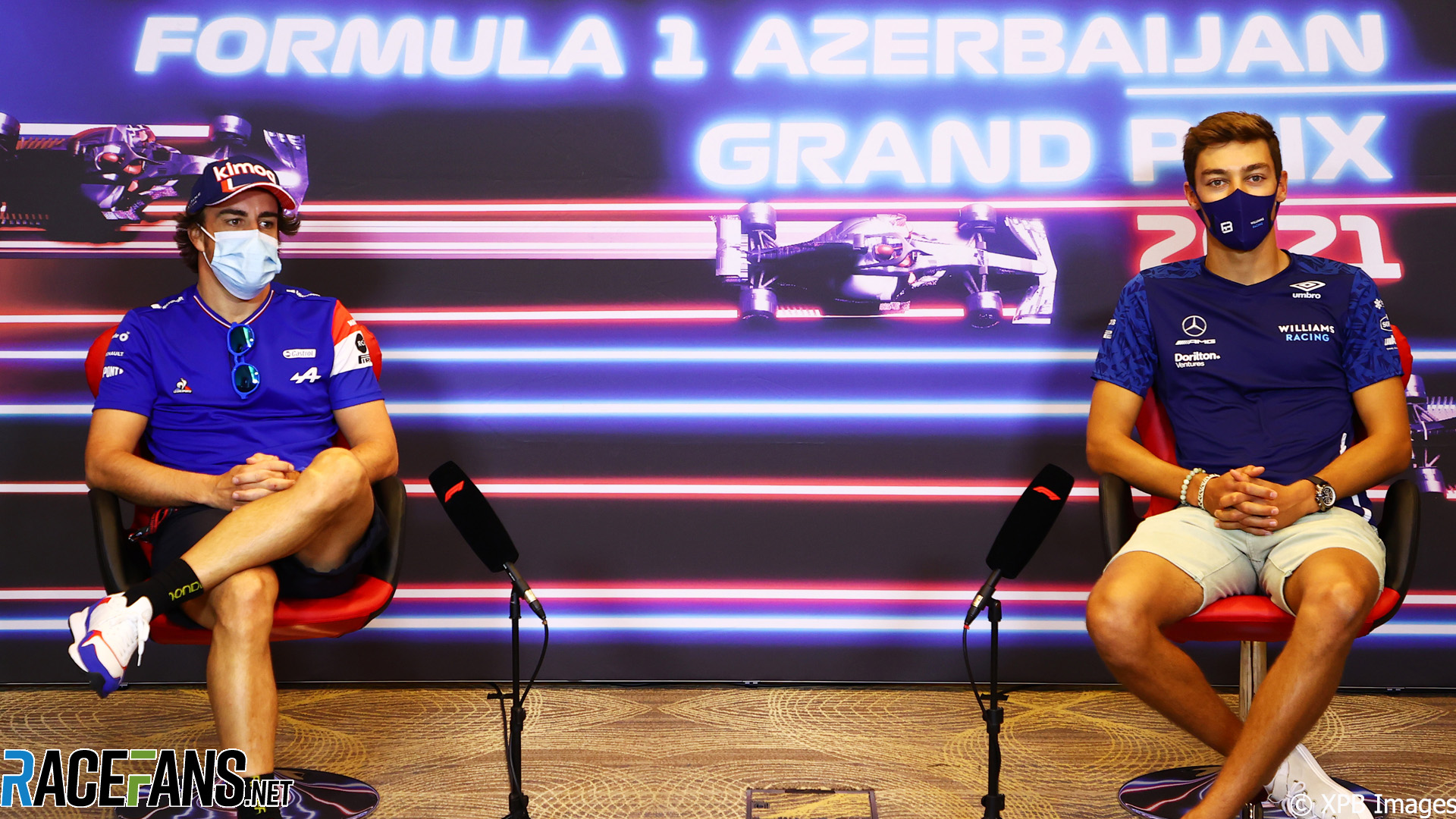 In the round-up: Fernando Alonso has praised George Russell, saying he admired his performances last year while Alonso was watching from home.

Alonso and Russell swapped helmets after the Monaco Grand Prix, with Alonso signing the one he gave Russell with a message: “George, you rock! Future world champ.”

Paired up for the press conference yesterday in Baku, Alonso said that it wasn’t empty praise – or politeness to the man sitting next to him – but a genuine opinion based on assessing Russell’s performance over 2020, when Alonso was not racing in F1.

“[I’m] definitely very impressed. It’s not that he’s here’s sitting [next to me] but I said, also, last year when I was following the sport at home, I think he has been very, very impressive.

“The performance we saw in the Williams that we know that is not a competitive package; a little bit better this year, but not in the last two and [despite that] I think he was pulling something special every weekend, that was nice to watch at home.

“Then the opportunity with the Mercedes, I think was good enough to show not only the people that we were watching at home. I think it was a real opportunity for everyone to watch what a driver with the talent of George can do with a winning car, nearly won the first race and the first opportunity he had. So that I think it was proof for many people, not only for few that we knew how good he was. I think that race in Bahrain was enough to open [the eyes of] many, many millions of people.”

Carlos Sainz Jnr has said that although he was still preoccupied with the frustrations of qualifying post-race in Monaco, he has since become more proud of taking his first podium for Ferrari.

“At the beginning, particularly on Sunday, I didn’t get much of a buzz. I didn’t get to enjoy it as much as I probably should have.

“I was still pretty angry about Saturday and I was still regretting not being able to be in the front row, at least of that qualifying due to what happened on the circumstances. So on Sunday, I still felt like second was not enough, for the pace we had that weekend.

“But it was a bit of a relief at least to score the podium, to finish second, give the team a good result. Then as the day started to pass, I started to reflect a bit more on it and I started to be a bit more proud, a bit more happy of the weekend in general.”

Kimi Raikkonen has said that despite frustrations with Alfa Romeo’s performance this year, the key to a season in any position on the F1 grid is to take opportunities where you can.

“You always try to do your best and that’s all you can do, and especially when you’re in the fight in the front. Whatever the situation, you try to make the best end result and obviously in some races, a bit better than others, and it depends on many things.

“Obviously. when you have somebody close to you in a championship, it’s not just look at what he does to try to do it. [It’s about your] personal best and as a team and then hopefully that plays out in a good way for you in the end of the year.

“But there are still many races to go. And I think try to limit the bad days and if it’s a bad day then you still try to score points and it will pay off.”

Codemasters have revealed the first screenshots of the new edition of the official Formula 1 game, F1 2021.

It will be the first F1 game for next-generation PlayStation 5 and Xbox Series X/S consoles. F1 2021 will also appear on PC (Steam), PS4 and Xbox One.#F1 pic.twitter.com/1mR9XGRucf

Close, but not close enough.@IMS chooses its winners. It wasn’t @AlexPalou this year, but he had his sights on next year’s #Indy500 on his team radio.#INDYCAR // #DEFYEVERYTHING pic.twitter.com/kd6Jivg9GK

Though there's caveats in that NASCAR's race was rain-delayed and IndyCar's had an attention-grabbing crowd, the Indy 500 out-rated the Daytona 500 for the first time since 1995, per @AustinKarp.

"'If everything goes the way it is going at the moment and the vaccination continues, we will be, in October, in circumstances where all adults are vaccinated and be able to hold events in October, November and December.' Despite the fact that a provisional hospital for cases of Covid-19 is located in the Autodromo Hermanos Rodriguez, the Mexico City mayor believed that the event could be held from October 29 to 31 and have capacity for one hundred thousand people."

"After the majority-white community in downtown Miami successfully opposed this assault on their neighbourhood in 2018, Miami-Dade County, the Miami Dolphins and F1 are flexing their financial and political muscle to overpower our community — which is over 70 percent black — despite overwhelming public opposition. Which proves our point: These races are racist."

"We were not in great shape on Thursday in Monaco and Max was not particularly happy with the car but the work behind the scenes, the work Alex has been putting in on the sim, all helped to turn it around for Saturday."

"'Certainly from our perspective — Formula One Management — we embrace all motorsport, because one of my ex-colleagues Sean Bratches used to say that when the tide rises all the boats go up, and we believe that very strongly,' Brawn said. 'If you increase the interest in motorsport, more fans get engaged.'"

"You’ll see us running away either just before or after the national anthem. It looks like we’re fleeing the cameras or interviewers but really we just want to go to the washroom!"

Driving results: How Formula 1 is reshaping the fan experience in the digital world (Google)

"This broadcasting milestone between YouTube and F1 delivered 1.7 million views across live content from the Eifel Grand Prix weekend — and 41 million views to a unique audience of 10.5 million fans over the entire race week."

"The car will be quite ‘oversteery’ due to the high deg on the rear tyres because you are constantly decelerating and then accelerating at the slow corners, and that is a lot for the rear tyres to cope with. I think it will suit me really well here."

"Mahindra Racing can rely on Nick Heidfeld. The ultra-experienced German - who made 44 starts and sealed eight podiums in his Formula E career and started 183 Formula 1 grands prix - would step into the breach should Alex Lynn or Alexander Sims be unable to race, and he's a vital cog in the Indian outfit's machine as an advisor. No doubt if called upon, he'd be a safe pair of hands."

Lando Norris characteristically downplayed McLaren’s chances in Baku but Wsrgo says that a lack of errors could put them ahead of Mercedes or Red Bull around the Azeri streets.

Unlike Ferrari, who are reliable contenders for snatching defeat from the jaws of victory every time of asking, McLaren, with their operational strength and an in-form driver in Norris, will be more than capable of taking a win if they’re anywhere close to Red Bull and Mercedes.
@Wsrgo