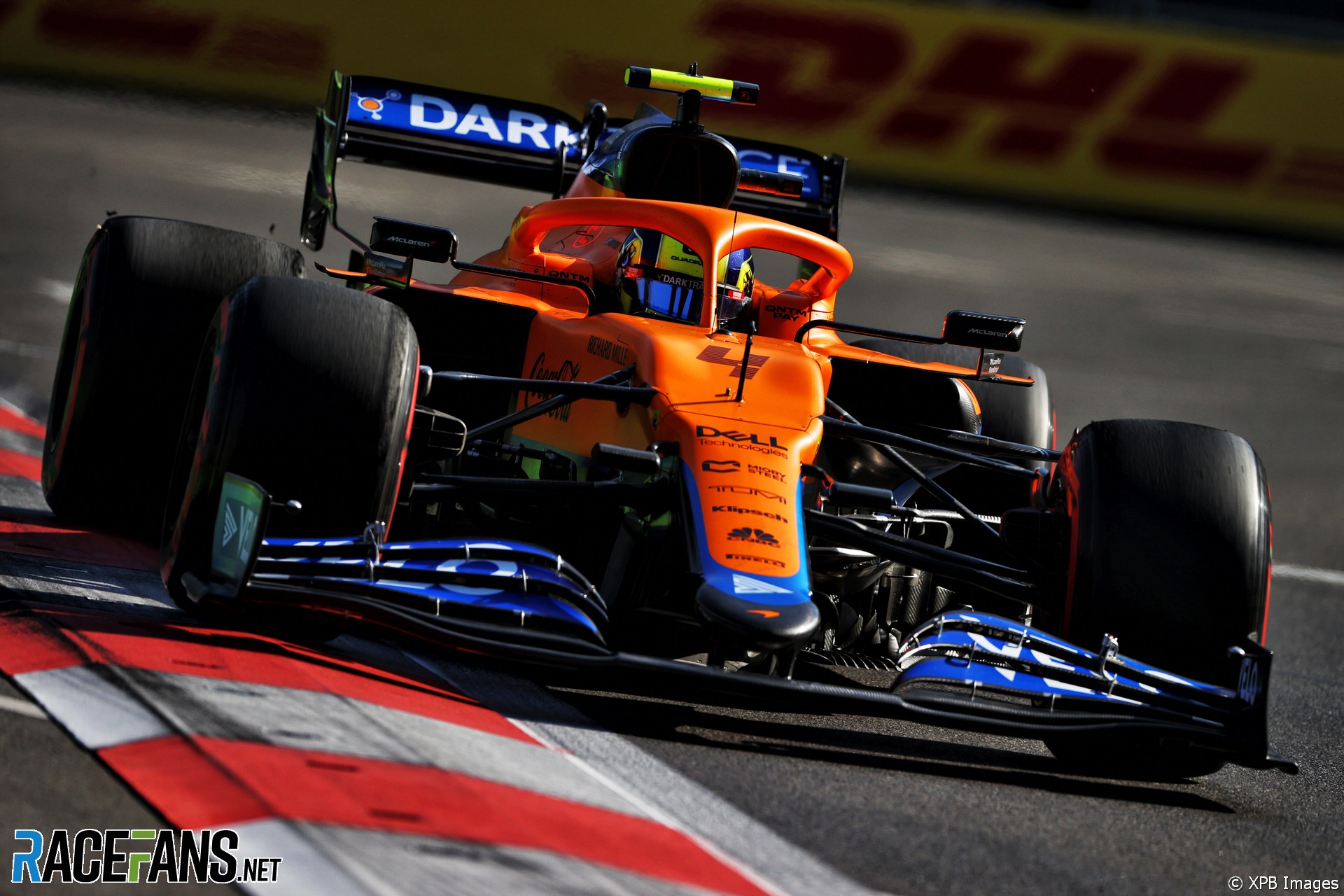 Lando Norris criticised the stewards’ decision to penalise him for failing to pit immediately following one of the red flag periods during qualifying today.

The McLaren driver defended his decision not to pit as the red flags were waved as he approached the pit lane entrance at high speed during Q1. Norris insisted he made a safer decision by not pitting immediately.

He was called to the stewards after qualifying and issued a three-place grid drop, and given three penalty points on his super licence, for crossing the start/finish line after the red flag had been waved.

The penalty dropped Norris from sixth place on the grid to ninth. He said he was “a bit gutted” by the verdict. “In my opinion, I didn’t feel like I did anything wrong.

Video from Norris’ car showed he slowed immediately after the red flag signals were given and prepared to enter the pit lane, but hesitated and chose to stay out. He asked his team “Should I box or continue?” and was told to enter the pit lane. But by then he had passed the pit lane entry point and replied: “I can’t, I’m too late.”

After the stewards’ verdict, he said “I didn’t have time to talk to my engineer and say ‘should I box, should I not?’. So I did everything I thought I should have done.

“But it sucks because I guess there’s a rule [but] also sometimes there’s some more leniency to certain situations when the driver’s still done the best thing that’s possible to do in that situation. So [I’m] a bit gutted because it’s three places back. It’s going to make a life a lot more difficult tomorrow. I don’t feel like it’s a fair decision, but it is what it is.”

Following his penalty, Norris now has eight penalty points on his super license, leaving him four away from a race ban. He said he felt he should not have incurred penalty points for choosing what he thought was the safest response to the situation.

“For certain situations, like I said, they should just think what it’s like to be in the driver’s seat for a second and what they have to react to, the speed they’re doing and the time you have to react to things and so on.

“I think, obviously, a reprimand or something is the right thing to do, to have a bit more understanding in some some areas and be able to [override] the actual ruling itself and have a bit of a rethink on what’s actually really fair for the driver or the team or whatever went wrong.

“I didn’t put anyone in harm’s way. If anything, I took the safer option out of boxing and not boxing and that makes it even worse. So I don’t deserve three points on my licence for this, I didn’t do anything dangerous.

“I didn’t do anything because I didn’t know and I was clueless or anything, there was nothing to do with that. I know what the rules are and so on. So it’s not like I have a lack of understanding or anything like that, but for some situations they should actually rethink what’s going on.”

The stewards’ noted Norris was not given the usual five-place grid penalty, acknowledging the lack of time he had to react. “The stewards assume that if a red flag is not respected during qualifying, a drop of five grid positions is appropriate,” they stated. “However, if you consider that the driver only had a very short time to react due to his position on the track, a drop of three grid positions is sufficient as an exception.”