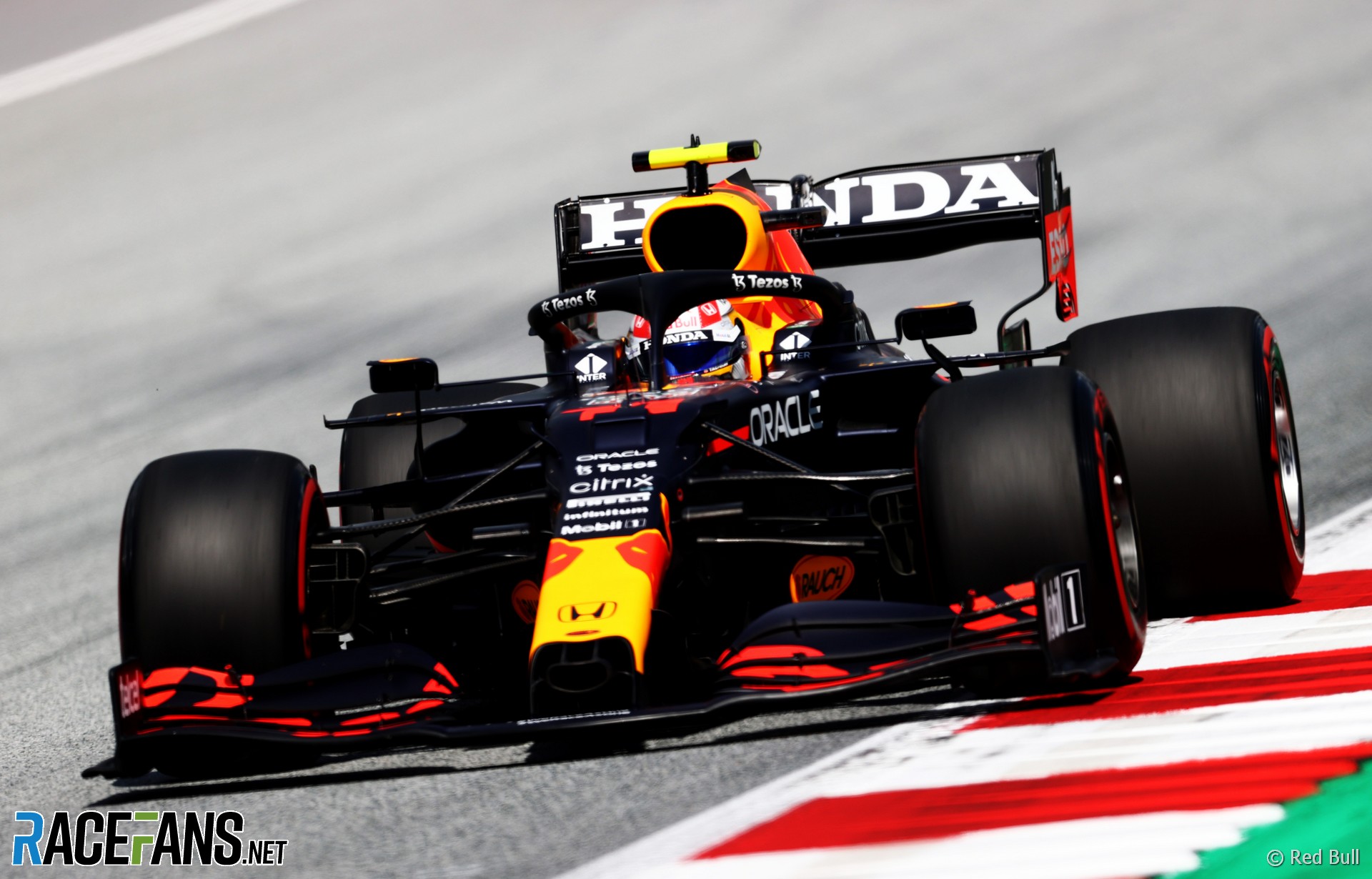 Qualifying, in principle, played out as it would have been expected to. Max Verstappen had been fastest over the weekend and he was the only driver to set a time below 1’04 around the Red Bull Ring.

Some other aspects of qualifying were pre-determined: Valtteri Bottas went into the session with a known three-place grid penalty for the race start, so despite setting the second-fastest time, he will begin the Styrian Grand Prix behind team mate Lewis Hamilton, Lando Norris and Red Bull’s Sergio Perez.

Having had 24 hours to mull over the likely effect of Bottas’ grid penalty on the race, did that influence Red Bull’s approach to it? The team took the intriguing decision to split their drivers’ strategies.

Verstappen went through to Q3 on medium tyres and it seems very likely, given the competitive pace of the Red Bull cars this weekend, that Perez could have, too. However, he set his best Q2 time on soft tyres. That, of course, ensures they will start the race on those compounds.

Bottas’ penalty increased the likelihood of him starting behind Perez, and so it has proved. The second Red Bull will start alongside Norris on the second row. The McLaren driver will also begin the race on a set of softs.

Did Perez opt for softs because he was concerned he wouldn’t reach Q3 on the harder, slower mediums? He indicated otherwise after the race, saying the team believe the strategy “is the fastest one”. Why would that be so for him instead of Verstappen? Perhaps the team is banking on his regular ability to coax tyres into lasting longer than his rivals can.

Whatever the explanation, Perez’s first priority is to get past Norris, which will allow him to fulfil his role by keeping Hamilton under pressure. His best chance to do that comes at the start.

The field is incredibly tight at Spielberg. On a short, high-speed track with three DRS zones there should be plenty of in-race action but the first lap could be particularly dramatic.

A superb qualifying effort by Norris has put him in the middle of the bunfight between the top two teams. He is well aware McLaren’s priority is to take points off Ferrari. He may not be a soft touch, but his past form indicates he’s unlikely to risk that by going wheel-to-wheel with Bottas or Perez.

“I think everyone knows that we’re going to get to tomorrow and the Mercedes are going to be a lot quicker and so are Red Bull,” he said after qualifying. “Maybe not miles quicker, but they still have a much better race car than we do.”

Bottas has another obstacle between him and the front runners in the shape of Pierre Gasly. Having been quick all weekend, and giving nothing away to the Mercedes in a straight line, Gasly could prove tricky to pass. That said, he’s unlikely to have any compunction about fighting Perez in the car that, two years ago, was his.

Verstappen and Hamilton shared the front row of the grid in France one week ago and the Mercedes driver got the better start. That, plus Verstappen’s error at the first corner, put him in the lead. He’ll be on the inside line this Sunday, and a better start could immediately tee him up for a pass down the inside.

McLaren’s drivers had differing fortunes in qualifying. Norris will start the first Austrian race, as he did in 2020, in third. Daniel Ricciardo , having been an encouraging second-fastest on Friday, will start the race 10 places back in 13th.

In terms of what Ricciardo can salvage this weekend, the set-up direction he has chosen will play a significant role in how quickly he can rise through the field.

“It’s pretty much a track of two halves,” team principal Andreas Seidl explained. “The first half has the three straights and the big braking zone. Then you have this short, high-speed second half of the track. Which makes it not straightforward in terms of finding the right set up on the aero side and also on the mechanical side.

“With having three DRS zones, a DRS zone on every straight, that changes, again, what you would like to have in an ideal world for qualifying and for the race, because for the qualifying you put on maximum downforce because you have the DRS in all three straights. But for the race, obviously, you would like to have a bit less downforce because you run the majority without DRS.”

With Norris well-placed to out-score both cars from their closest rivals Ferrari, McLaren need Ricciardo to at least beat one of the other two to ensure what they gain with one car isn’t lost by the other.

Thunderstorms have been predicted for almost every session at the Red Bull Ring and have yet to arrive. However, second practice was run on a slightly greasy track and if there is changeable conditions, could create a question of who dares run slicks first.

At the time of writing, substantial thunderstorms have been reported in the vicinity. Even if rain doesn’t fall during the grand prix, an overnight dousing could radically change grip levels tomorrow, much as happened at Paul Ricard last week, catching several teams off-guard.

Can Mercedes stop Red Bull from taking their fourth win in a row? Will Perez’s soft tyre strategy pay off? And what other storylines have you got your eye on in Sunday’s race?

Share your views on the Styrian Grand Prix in the comments.