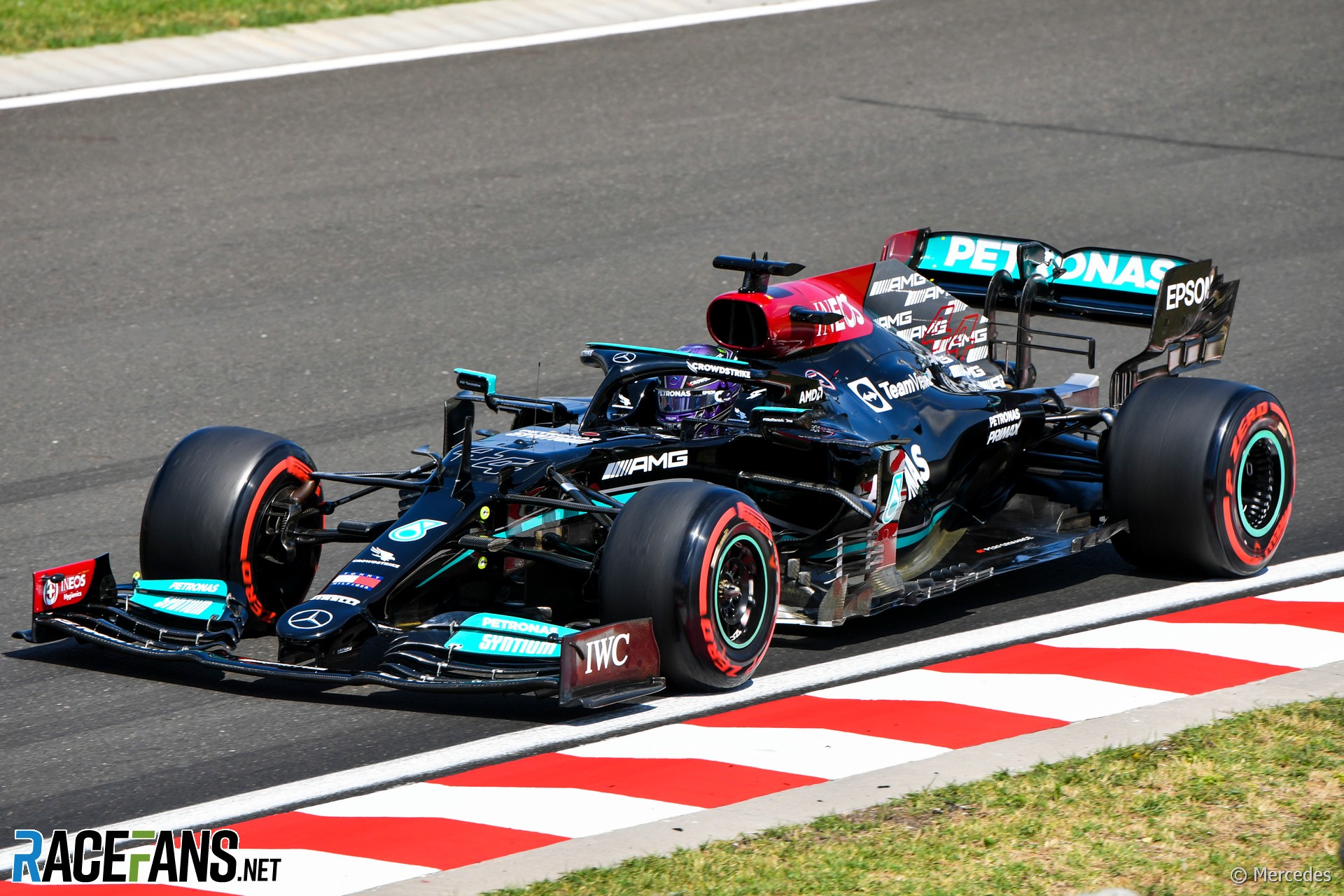 Lewis Hamilton led a Mercedes one-two in qualifying for the Hungarian Grand Prix after a tense end to the session.

Max Verstappen had to settle for third on the grid after narrowly making the cut to start his final lap time. The Red Bull drivers were queued up behind Hamilton at the end of the session, and Sergio Perez was unable to begin his final lap before the session ended.

Verstappen led the way after the opening exchanges between the front runners in Q1. The Mercedes pair were first to run, Hamilton leading the way with a 1’16.424, but Verstappen beat that by two-tenths of a second. He opted for softs as his rivals did, and was called to stop on the weighbridge as he returned to the pits.

Sergio Perez couldn’t match his team mate’s pace and immediately went for another run on the same set of tyres. But he remained a second behind the other Red Bull in a lowly ninth place.

Carlos Sainz Jnr set the fourth-fastest time ahead of Pierre Gasly, though the pair met on-track. Sainz clambered all over the kerb on the inside of turn one after leaving the pits as he tried to avoid holding up the AlphaTauri driver, who’d also been impeded by Antonio Giovinazzi in final practice.

Having lost time after his crash in first practice yesterday, Yuki Tsunoda fell into the bottom five before the final runs began, joined by the Williams and Haas drivers. Mick Schumacher did not emerge from the Haas garage at all as the team were unable to repair the car he crashed in final practice in time for him to take part in Q1.

There was no change after the final runs, which meant not only did George Russell’s bid to continue his run of Q3 appearances come to an end, but for the first time this year he was unable to make it out of Q1. “Sorry guys, no good,” he said after missing the cut by less than a tenth of a second, “just couldn’t get the car working.”

Team mate Nicholas Latifi also went no further and complained about his engine cutting out during his last run. “I lost so much time from the cutting,” he said. “This is new. I’m not doing anything wrong here.”

Forecasts that the track would be cooler in qualifying than it was on Friday, or even damp, were not realised. By the time drivers came to choose their race starting tyres in Q2 the surface temperatures had soared past 60C as they had on Friday afternoon.

Pace-setters Red Bull and Mercedes opted for the medium tyre compound while the rest chose softs. Hamilton produced a superbly committed lap, stopping the clocks at 1’16.553, half a second quicker than his team mate. Verstappen was quicker in the opening part of the lap, but lost too much to Hamilton in the middle of the lap, ending up two-tenths down on his championship rival. Encouragingly for Red Bull, Perez was much closer to his team mate’s pace on the harder rubber.

The midfield runners on soft tyres immediately got in among the medium-tyre times. First Sebastian Vettel and Gasly got ahead of Bottas, then Fernando Alonso joined them. Charles Leclerc was next, moments before his team mate spun into the barrier at the final corner.

Sainz’s Ferrari snapped away from him on the way into the long right-hander, and he thudded into the barrier with the left-hand side of his car. He briefly tried to drive his car back to the pits, but was told to stop as the session was red-flagged with six-and-a-half minutes remaining.

No one dashed for the pit lane exit when the session resumed – the remaining runners waited until the final three-and-a-half minutes. When they emerged, Bottas took a new set of medium tyres, while Perez opted for softs.

If that was not entirely unexpected, Verstappen sprang a surprise by doing the same. While front-runners habitually use soft tyres for a pre-Q3 ‘sighter’ lap at the end of Q2, Verstappen improved his time, committing himself to starting the race on the soft tyres.

Perez improved to fourth with a 1’16.443, though he was almost eight-tenths of a second slower than Verstappen. A thrilling flurry of late improvements saw Vettel deny Daniel Ricciardo a place in the final 10 by less than a tenth of a second; Ricciardo was almost half a second behind team mate Norris.

Verstappen was puzzled after his first run in Q3, which left him three-tenths of a second down on his later flier in Q2. “I don’t know why but I had just a massive lack of grip on this set,” he told the team.

The Mercedes pair took advantage: Hamilton’s 1’15.419 was over half a second faster than Verstappen managed, and Bottas split the two title contenders. Perez, fourth, was over a second off Hamilton.

The tension between the leading teams came to a head as the drivers began their final laps. The two Red Bull drivers followed the Mercedes pair around the track as the seconds ticked down. “We should be good,” Hugh Bird told Perez, the last of the four drivers.

Bottas was first to start his run, followed by Hamilton. Verstappen followed his title rival around and reached the chequered flag with barely a second to spare. But as Perez emerged from the last corner the lights at the start/finish line were already red.

Whether any driver will face a penalty for holding up the cars behind remains to be seen – the stewards have not announced any investigation. It proved academic, however, as the track conditions seemed to have deteriorated and the front runners either failed to improve their times or made no significant gains.

That confirmed Hamilton on pole position for the race, with Bottas alongside and the Red Bull pair behind. Perez was fortunate not to pay heavily for failing to start his final time, as Gasly, Norris and Leclerc all got within a tenth of a second of him. The Alpine pair and Vettel completed the top 10.