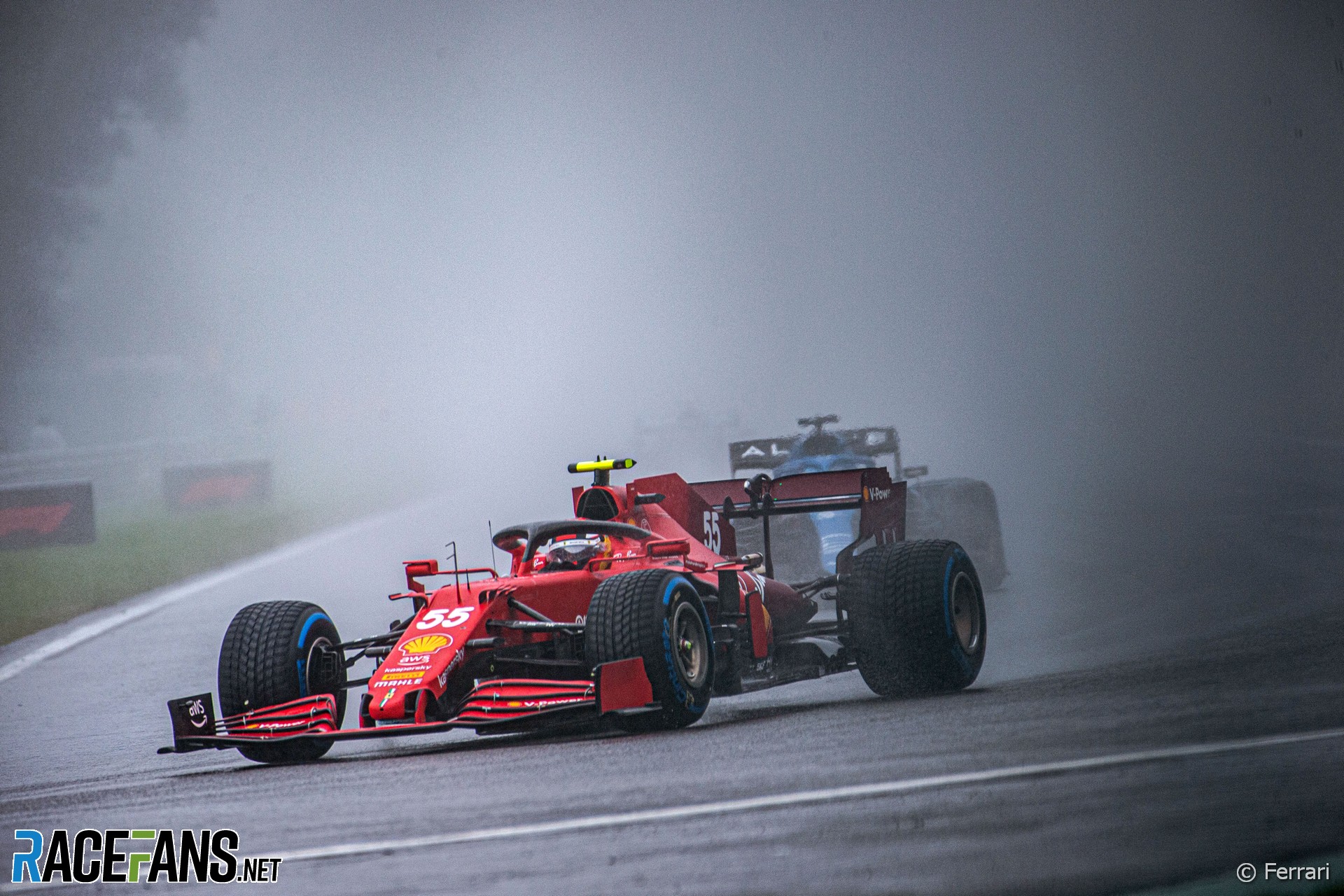 In the round-up: Carlos Sainz Jnr says that conditions were so poor at Spa during the Belgian Grand Prix drivers would have been unable to avoid each other.

After the bizarre events of the Belgian Grand Prix, Sainz said that only a ‘super pole’ session, with cars going out on track individually, would have been possible during the race period.

“One by one, we could have done a ‘super pole’ today, no problem,” Sainz said. “We could’ve gone through Eau Rouge, this was not the issue. The issue was visibility and the two laps that we did behind the Safety Car, the tyres cool down to zero and you’re going to go into Eau Rouge and into that straight with zero visibility.

“If someone spins in front of you with cold tyres, I’m telling you that if P10 crashes, back to P20 everyone hits him and this is where a big accident at 300kph could happen.”

Formula One Management and the Spa-Francorchamps circuit have issued statements sympathising with fans who saw no racing action yesterday. Spa praised the tenacity of fans in staying throughout the continuously wet day and an F1 race which saw just four laps of running behind the Safety Car.

“Spa Grand Prix SA expresses its deepest disappointment to the outcome of this weekend, which was supposed to be the one of reunion, the conclusion of a year of hard work during which we overcame all obstacles,” said the circuit in its statement. “It started well, the show was there, but the weather conditions were not in our control and the decision made by the race direction must be respected, as the safety of the drivers must remain the priority.

“We share the disappointment of our customers, who have been exemplary in the way they have suffered this incredible day, but also in the way the evacuation has been carried out, This underlines, once again, the quality and the perfect behaviour of our public of enthusiasts.”

Formula 1 also sympathised with fans who had not got to watch any racing action but stood by the decisions of the stewards. “Following the significant weather disruption to the 2021 FIA Formula 1 Belgian Grand Prix, the FIA and Formula 1 are disappointed for all the fans at the track and at home that today’s race could not go to full distance, but the safety of the drivers, marshals and spectators must always be the priority.

“The decision of the stewards to extend the window in which the race could take place gave every possible opportunity to maximise the day’s running, but the weather conditions unfortunately did not improve sufficiently to complete more laps.”

Neither party has indicated plans for compensation, though RaceFans understand these are under consideration.

Ricciardo would quit racing if he was motivated by money

Having marked his 200th grand prix in yesterday’s bizarre race, Daniel Ricciardo he isn’t entertaining thoughts of quitting. The McLaren driver said that if he found he was continuing driving for money, rather than a love of the sport, he would quit.

Asked whether he would still be driving in Formula One if he didn’t get paid to do so, Ricciardo said: “Maybe it’s the age in me but I do ask myself that question and the answer is ‘yes’. And I think the day the answer is ‘no’ is then the day I have to stop racing.

“I am pretty good at kind of checking myself on that and as a kid, I never did it to be on TV, to get paid money, it was because I loved it.

“The day that becomes outweighed or overpowered by the money or the fame or whatever it is, then that’s simply the day I have enough, inner awareness, self awareness to say, ‘alright, I’m done with this.'”

The best race drivers in the world have completed a two lap race behind a safety car. Race officially completed.
Spectators won't have to be refunded. Well done.

Brave decision by Michael Masi @fia If the race had gone ahead and there had been a serious accident, we'd be asking why he started the race. Tough. But ultimately a mature thing to do. Spa has claimed a lot of drivers #f1

#F1 not covering itself in glory today. Basic questions like whether the race has started and how many laps remain shouldn't be the sort of thing that need lengthy debates. But when the sporting regulations alone are almost 100 pages…#BelgianGP

Completely agree with this, and with Lewis Hamilton’s comments about it being a money-driven decision. Couldn’t believe it when I saw that farcical podium ceremony. #F1 destroying its own integrity in a way even Bernie didn’t manage.

This is very problematic in itself but it’s always nice to see even the teams break the series’ own embargoes. 🤦‍♂️🇬🇱 #ArcticXPrix #ExtremeE pic.twitter.com/anfn4YGMoG

"'The Crypto.com Overtake Award gives us the chance to celebrate drivers’ instincts to make bold and strategic moves which reflects the qualities needed when dealing in cryptocurrency.' As an exercise in using corporate bilge to try to marry two quite incompatible things, I think you’d have to go a very long way to top that."

"The New Yorker, driving for the new African-American owned Force Indy team, took the lead with just a few corners remaining in the 20-lap race after starting 10th on the grid, and became the first African-American to win a round of the Cooper Tires USF2000 Championship."

Hauger plays down title deficit, insisting Prema have 'got the pace to beat' Doohan (Formula 3)

"'Trident had a really good car this weekend and he (Jack Doohan) managed to maximise everything,' said Hauger. 'He has had some bad races before, though, and I have just had a bad weekend.'"

"Nojiri’s car was just too fast for any of the other drivers to handle on this day, helping him to cash in on his 3rd victory of the season with two rounds to go. Nojiri now has 76 points to second place finisher for this race Sekiguchi’s 39.5 points."

F1 Frog defends the decision to award points to drivers for a race which was run entirely behind the Safety Car.

If you just take the title protagonists as an example, Verstappen has gained five points on Hamilton.

Some may say that is unfair as he didn’t have do beat him in the race to gain those points, but the fact that he took pole and Hamilton was only third means that if there had been a race, it is most likely that Verstappen would have gained some points on Hamilton, so the half-points are fair.

Nothing wrong with what Masi did today, I think it’s just the anger of watching replays of people pulling trollies in slow motion and rain falling for four hours that is getting to people. Nowhere to point the blame today, except at the weather gods.
@F1frog