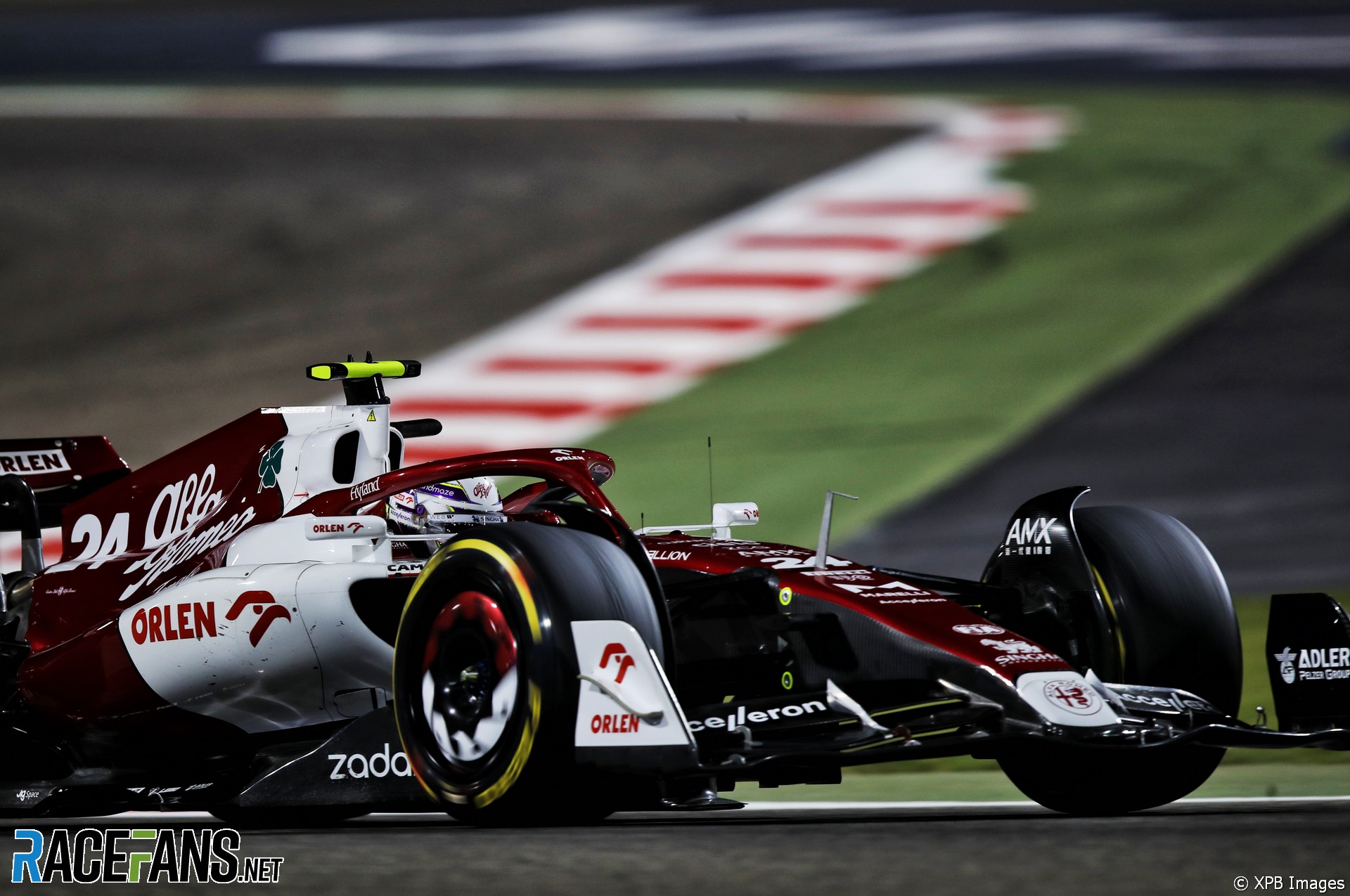 Zhou impressed his team at the second pre-season test, Pujolar explained: “We already saw that, in terms of managing the long stints, he was very strong. Once we instructed him on what to do, how to do it, he was able to execute it.”

But the team was eager to see whether he could replicate that pace in a race. “We had the question mark: will he be able to replicate that when he’s in a fighting scenario? One thing is to do it when you are on your own, but then when you are in a crisis scenario, when you’re fighting with other people, it’s not the same.”

Despite losing ground at the start in Sunday’s race, Guanyu recovered to pick up a point on his debut. “He did exactly the same job, I will say even better than last week because last week, the first time we tried probably we were a bit on the conservative side,” said Pujolar.

“His pace was there was good. It was very strong. And he was consistent with the tyres, better than guys with a lot of experience.

“He was not fighting with other rookies, he was fighting with people with a lot of experience in F1. So I think he did a very solid first race for him in F1.”

Esteban Ocon will have a replacement for the upgraded sidepod his Alpine shed early in first practice, in time for this weekend’s Saudi Arabian Grand Prix.

“Esteban will return to the latest spec sidepod after the issue from last week.” Alpine’s chief technical officer Pat Fry confirmed. he added the team “don’t have any distinct upgrades for Saudi Arabia but we will run some interesting test items in practice, which will give us some ideas for future concepts.”

“As it’s a low downforce circuit, we will have a different rear wing for this weekend,” he added. “We have a development plan in place and we are pushing ahead as hard as we can for the Melbourne race and beyond.”

Gasly’s fire left mechanics “more work to do than expected”

Pierre Gasly has said that AlphaTauri had to complete a full rebuild on his car, following the fire that ended his Bahrain Grand Prix.

“The team has identified the problem and the fire meant the mechanics have had a lot more work to do than expected to rebuild the car for this weekend,” Gasly said, ahead of the Saudi Arabian Grand Prix.

However, he said that there were positives to take from Bahrain. “We learned a lot about the car over the three days and it’s clear that the midfield is maybe even tighter than last year, so we must continue to work hard on understanding and developing the AT03, starting this weekend in Saudi Arabia.”

Formula 1 has renewed its contract with Australian broadcaster Foxtel, whose subscribers will be able to access both full coverage of F1’s practice, qualifying and race sessions and the F1TV app via its set-top boxes. The multi-year deal will see F1TV available as an app to Foxtel subscribers, free of charge within their Foxtel subscription.

It will be enormous!!! 🤯😎 pic.twitter.com/D3Cz8smSjD

Just a couple of weeks away now..

I went to Albert Park tonight for a look and some photos 🇦🇺 📷 🏎 pic.twitter.com/JShzlfJnm0

The first Season 8 episode of Meet The Team is here 🙌 Meet Calum, No. 2 Mechanic for @mitchevans_ 🔧

Calum breaks down his responsibilities within the team, his proudest moments and key advice for someone looking to get into motorsport! pic.twitter.com/WYBQajuGhQ

What do you think of my special night helmet for Jeddah? Myself – 🥵🥵🥵

Michel: 'I am very pleased with the new racing format, and the difference in the points allocation between the sprint and the feature races really gives Sunday’s race the spotlight it deserves. Everyone in the paddock, both F2 and F1, but also the fans have said they are also liking this year’s format. 2022 is definitely off to a good start!'

Steps were also taken by the Automobile Club of Portugal (ACP) who launched, in partnership with TAP Air Portugal, a humanitarian transport operation for those fleeing war in dramatic conditions, ensuring the safe arrival of 200 passengers from Warsaw to Lisbon. In parallel to this initiative, ACP created the campaign ‘Uma vida, um lugar’ (One life, one place) and invited people to donate.

'I chose to turn to girls because the world of motorsport is difficult, you need sponsors and money, you need someone who believes in you, who supports you, this applies to everyone, but very often for us girls it seems to be worth a little more' continues the driver 'I was lucky enough to have a family that supported me since I was a child, and in fact I got on a kart when I was 8, but the truth is that kart was for my brother, I was already riding.'

After Stefano Domenicali said that interest in hosting F1 races was so significant it would not challenge the series to put together a 30-race calendar (although it is limited to 24 by the Concorde agreement) Depailler says perhaps format creativity, describing something very like Formula E’s personnel-limited, one-day structure, might be the way to make an extended calendar feasible.

Interesting point about load balancing, but I remember a very interesting article on RaceFans about how many non-F1 races drivers used to take part in.

E.g. Jim Clark won the championship in 1965. Although there were only 10 races, there were seven non-championship races. He also won the F2 championship, Indy and took part in the touring car championship. Lots more races than todays drivers.

The capacity issue is not with the drivers, but with the teams. The drivers, Wolffs and Horners are earning enough cash not to worry about working more races. But I can see a problem for mechanics and other staff.

If the FIA wants more races they need to cap the number of staff teams can take. There is no law that says they need 20 people to do a pit stop. It could easily be done with 10, perhaps it would take 8 seconds not three, but if everyone has the same limitation then what’s the problem. That way most staff could go to alternate races.

I’m all for more races. It would make sense to have more geographic thought about the order of races, but I’d happily watch another 23.

There is also no reason other than habit to have three-day events. I like listening to the chat during first, second and third practice but rarely watch them. Let’s have some races where qualifying is at 10am on Sunday, race at 2pm.

Come on people – let’s have a bit more of open mind about change here. If the formula is right then more is better.
Depailler