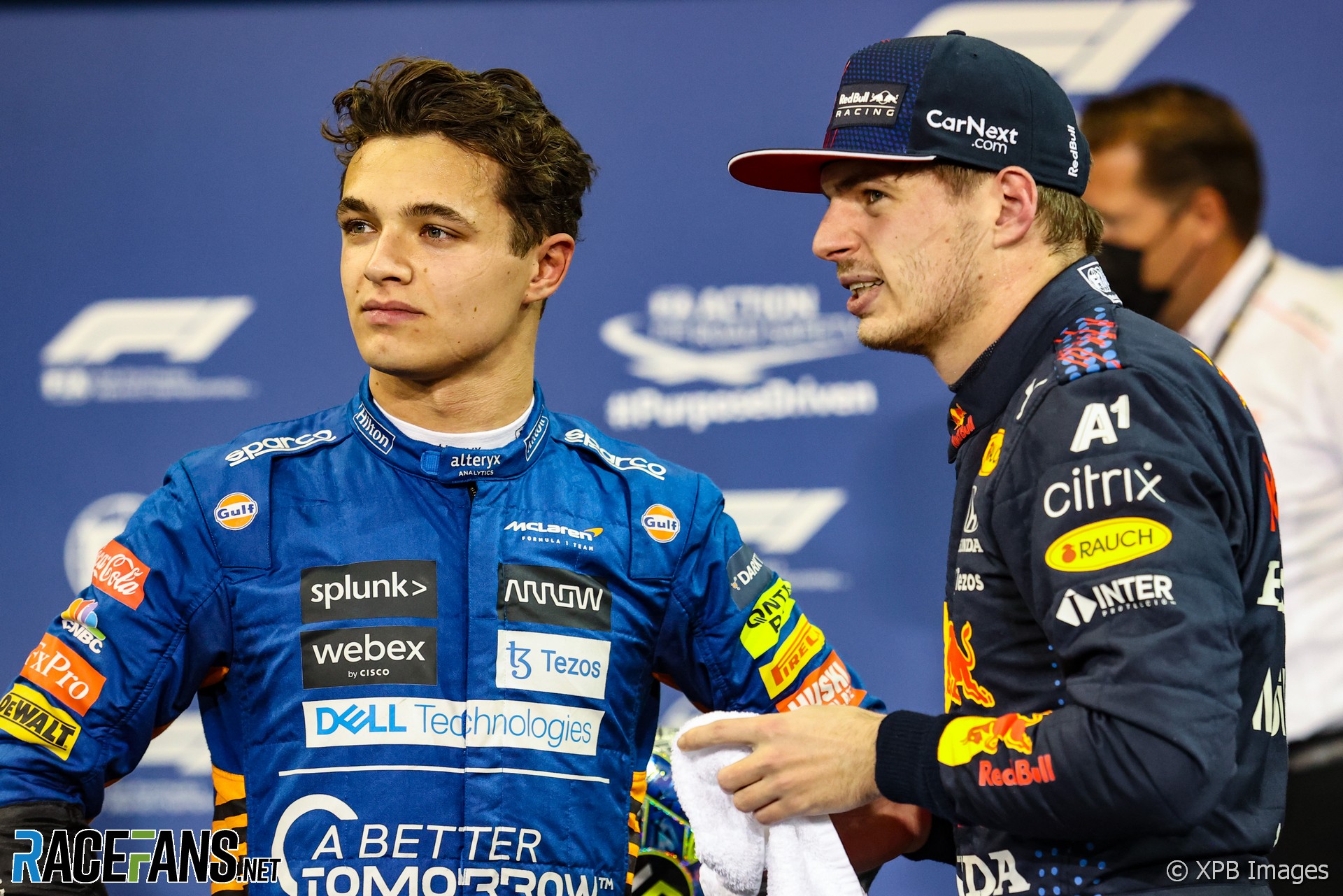 Max Verstappen says Lando Norris was made to look “a bit of a dick” in the latest season of the Netflix documentary series Drive to Survive.

The world champion has refused to participate in the hugely popular series following its first season, filmed over the course of the 2018 and broadcast the year after.

Formula 1 CEO Stefano Domenicali said last week he will approach drivers like Verstappen who do not wish to co-operate with the show and try and address their concerns around participating. Verstappen said he has not yet spoken to Domenicali about the programme.

Asked by RaceFans if he would be willing to discuss his involvement in the show, Verstappen said he would be “happy to talk” with the F1 boss.

“Stefano’s a great guy, you can talk to him about anything,” said Verstappen. “I watched a few episodes of the last one and I was surprised that I suddenly found myself talking in it. It’s probably stuff from 2018 or something that they’ve picked up and used again about fighting or what I like to do. That already of course was not correct. I could hear it in my voice, it was a bit different.”

Verstappen pointed to the example of an episode of the most recent series released earlier this month focusing around McLaren drivers, Lando Norris and Daniel Ricciardo. He objected to how Norris was depicted in the episode.

“For me personally, I didn’t like – and it’s not even about me, it’s about Lando and Daniel, who I think are two great guys, they’re really nice first of all,” Verstappen explained.

“They made it look like Lando was a bit of a dick, which he isn’t. At all. And again, I know Lando and I think many people know Lando, he’s a funny guy – great guy. He has a great character and I think actually, when you look at that episode, you really think ‘who is this guy? What the hell is going on?’.

“I think when you are new to the sport, you’ve never seen a racing car or a Formula 1 car in general, they don’t like him. Why should that be? Because he is a great guy. You just immediately get a wrong picture of a person and that’s exactly what I think happened to me in the beginning. I’m someone who, when you ruin it from the start, you don’t fix it. That’s it. You ruined it. So that’s it, that’s my stance and that’s all I’ll go for it.”

Norris himself had previously expressed concerns over how he had been portrayed in the episode of the most recent series.

“Episode two is the first proper introduction to Daniel, myself and us and McLaren,” Norris explained. “I think it’s good, it gives you good insight. I think for my side it looks good, maybe not so much from the other side.

“There are obviously some comments and things here and there which are maybe out of place which, when you’re the person that it’s about, you maybe don’t agree with it so much, because it can make you look like you said something in a time and place which is definitely not correct.”

Verstappen hopes the show will evolve into a more factual depiction of the sport in future seasons. “I’m sure we’ll talk about it with Stefano, but at the moment I’m not really interested to take part in it,” he said.

“I saw the benefit initially, of course – you get more popularity – but for me, now, I think you reach a stage where it’s a bit more like ‘keeping up with the Formula 1 world’ – if you know my reference – and I think it shouldn’t be like that.

“It’s better just to make a season review by Formula 1 itself, I think that’s way nicer to look at. But that’s my opinion – nobody needs to share the opinion. I just don’t like to be a part of it.”