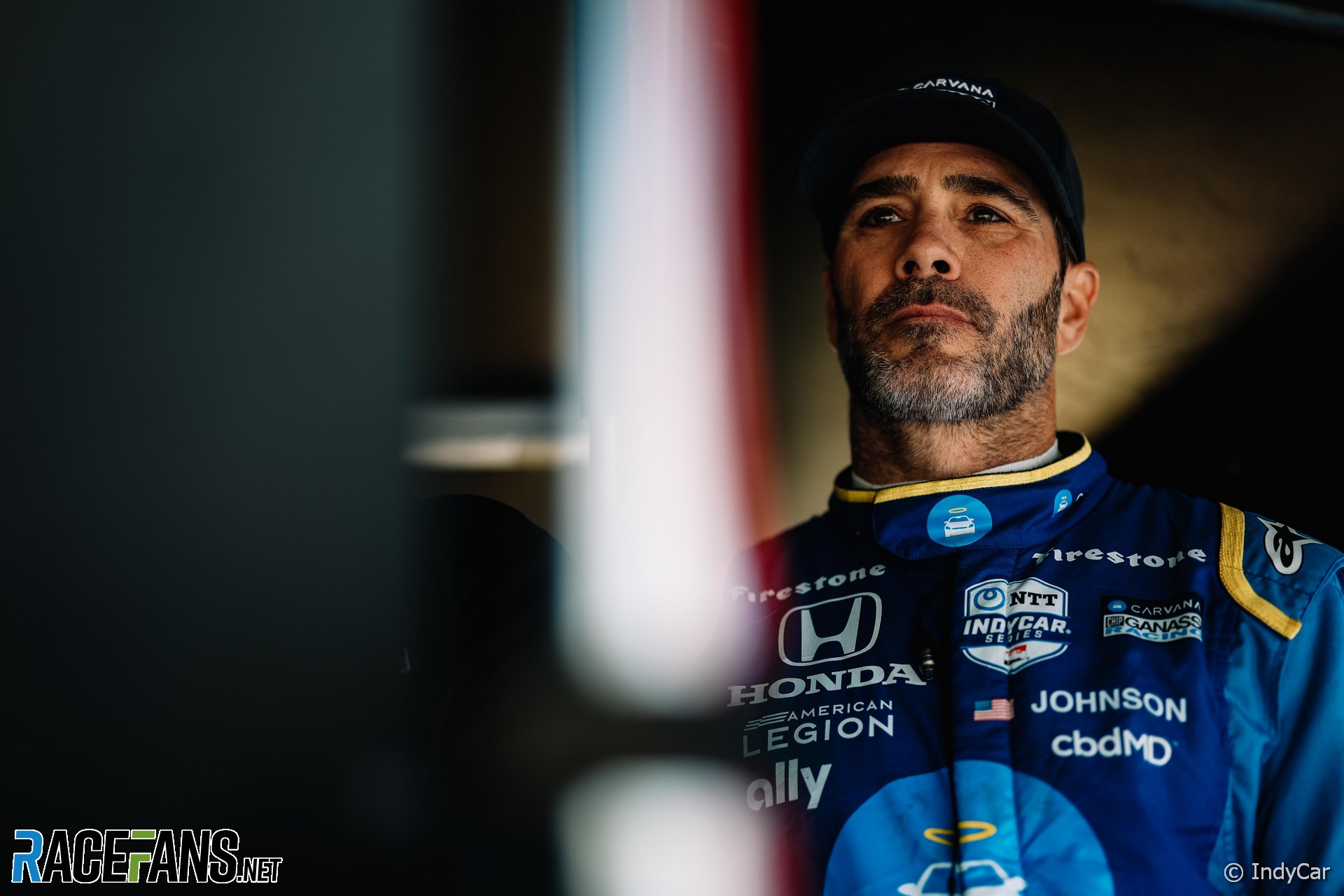 Jimmie Johnson said his experience at Iowa Speedway was the first time that he felt his NASCAR-honed skillset could really translate into success in IndyCar.

It rewarded him with a career-best fifth place finish at the Iowa 300 on Sunday, sealed by a firm-but-fair pass on his Ganassi team mate, and championship leader, Marcus Ericsson.

“I’m so happy to finally have some experience transfer from stock cars to IndyCars,” Johnson remarked afterwards

Part of the seven-time NASCAR Cup champion’s progression this season has simply been down to the fact that, unlike his partial rookie campaign, he is running the full season including all of the oval races. His sixth-place finish at the first of those – Texas Motor Speedway – was evidence that simply being back in a more familiar element would benefit the 47-year-old sophomore.

But this weekend was the first where Johnson felt truly in his element, understanding how to get the most out of his Honda-powered Dallara IR-18. In his words, he’s “just enjoying driving these little rocket ships around.”

“I’m understanding how these cars reward aggression,” Johnson said. “The faster you go, the more downforce these cars create. It takes a lot of energy to turn these tyres on, and make them perform like they need to. I just think I’ve been on the soft side of this since I’ve ever sat in a car.”

“The ovals feel more natural to me, and I’m able to find my confidence, push the car, and have the downforce and the tyres work for me.”

“[On] the street and road courses, I’m making gains. Unfortunately they’re not as obvious as what you can see here on the ovals. But I continue to make gains.”

Johnson also explained that the experience of racing around the 1.4 kilometre (seven-eighths of a mile) short oval – a circuit he’d never raced on prior to this weekend – was also the closest he’d felt to an experience similar to what he experienced at the height of his NASCAR success, where he could set up multiple corners and use multiple lanes to his advantage.

Specifically, he likened the experience of racing at Iowa to two revered ovals exclusive to NASCAR: Bristol Motor Speedway, the rapid half-mile bullring with its high-banked corners; and historic Darlington Raceway, with its abrasive surface that creates intense tyre degradation similar to what IndyCar drivers experienced this weekend at Iowa.

“It honestly reminded me a lot of running at Bristol, the way you just got to run right at the edge of the marbles, tip-toeing around that. And if you’re willing to get up that extra six or eight inches, it would pay off,” he said. “You just drive above and beyond what your brain tells you the car can do. Here later in a run, the tyres fall off. Reminds me of maybe Darlington in a Cup car, which both are two of my favourite tracks to drive.”

“At Texas I felt like I understood the timing of a run, I had the courage to try the second lane where others didn’t. Indy, I’m still scratching my head over the race at Indy, how to pass there. That was such a struggle for me.”

“On an oval you have that repetition, you get into a cadence of watching the driver in front of you, understanding if they’re inconsistent or if their car is inconsistent, what circumstances that puts them in, how you might be able to take advantage of it. You kind of build a cadence and rhythm of who you’re stalking.

“I found that to be very common here. Not so much at Indy. Texas, it didn’t feel that way. You’re going so fast, timing your run was more important than kind of stalking someone and working different lines.”

“So here, this is the closest experience that I would say crosses over to NASCAR that I’ve had.”

In a vacuum, that a driver of Johnson’s advanced age and his total lack of previous single-seater experience is doing more than just making up the numbers on a grid every weekend in IndyCar is a remarkable feat.

But by way of NASCAR’s popularity in the American motor racing landscape surpassing IndyCar’s – even as NASCAR’s popularity has plummeted in recent years – Johnson’s IndyCar adventure has been significantly hyped in a way that few other drivers in the series, even proven IndyCar champions, have been afforded in the same timeframe.

Which is why some observers have taken a more cynical eye to Johnson’s road and street course struggles and his underwhelming performance in his first Indianapolis 500 which ended in a late crash that could have cost Ericsson victory. That was followed by his contentious selection as the race’s Rookie of the Year by members of the media who were more impressed by his profile than any other tangible results (see also: Fernando Alonso circa 2017).

Johnson will have one more oval race to really dig in and showcase his best stuff, at Gateway Motorsports Park on 20th August, the low-banked two-kilometre/1.25-mile short oval that has similar traits to Iowa.

While nothing would match the achievement of winning the Indianapolis 500, a strong result or even a first career win at Gateway for Johnson would be a fine way to really put a bow on what should be a wonderful story of an accomplished racing driver reinventing themselves late in life and achieving success in another discipline of racing.

18 comments on “Breakthrough or blip? Johnson delivered an IndyCar result to match the hype at Iowa”