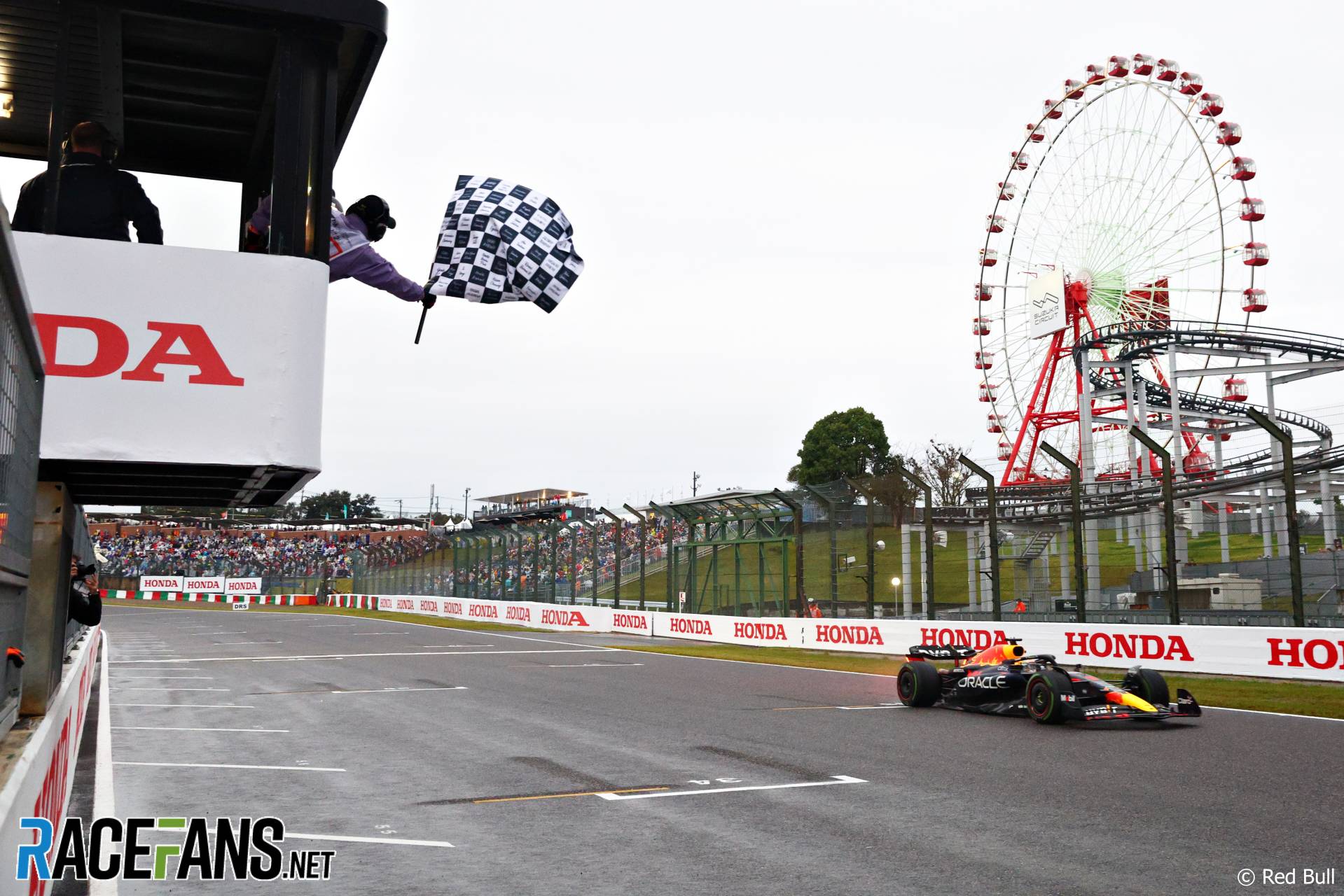 Red Bull team principal Christian Horner believes it was a “mistake” to award full points for the Japanese Grand Prix, despite the decision securing the championship for his driver Max Verstappen.

The FIA’s decision to give full points for a race which ran to little more than half its scheduled distance caught many teams by surprise. Heavy rain caused a two-hour interruption to proceedings and led to the race concluding after 28 laps out of a scheduled 53.

Red Bull and several of their rivals expected the FIA would award points in line with new rules which were introduced this year. These stipulate a race winner receives 19 points for a race which runs to less than 75% distance.

However the FIA determined that full points should be awarded as the rules state the reduced points are only used “if a race is suspended in accordance with Article 57 and cannot be resumed.”

Horner believes this is not how the FIA and teams intended the new rules to work when they were devised following last year’s farcical Belgian Grand Prix, in which half-points were awarded for a race which official consisted of a single lap behind the Safety Car.

“When you read the regulations, what I think was supposed to be fixed following Spa, perhaps is unspecified in the regs,” he said. “So unexpectedly we won, which is a phenomenal achievement by Max and the team.”

Verstappen had not mathematically clinched the championship after the race until Charles Leclerc lost second place to Sergio Perez after being handed a five-second time penalty for leaving the track and gaining a lasting advantage. Horner feels it is logical that reduced points should be awarded in any race that fails to meet the maximum 75% distance threshold.

“I think it’s a mistake that wasn’t included after the issues in Spa last year,” he said. “The regulations obviously haven’t been mopped up because we were under the strong impression that only 75% points would be scored.

“So we felt we were going to be one point short. But in the end, Checo’s move on Charles nailed Max the championship. So you could see his surprise, the team’s surprise. But what a wonderful surprise.”

Verstappen won the title after a penalty demoted Charles Leclerc to third place behind Sergio Perez. Before that happened, Red Bull were so convinced the lower points total would be given that they were considering whether they should pit Verstappen in a bid to score the bonus point for fastest lap and increase his chance of taking the title.

“We thought we were going to be one point short,” said Horner. “So we were playing with the idea of pitting, but it was unsure whether Checo would pass Charles or not.”

Horner added he is “certain” the rule will be changed.

Red Bull’s championship rivals Ferrari also did not expect to get full points for the race. “We were confused ourselves,” its team principal Mattia Binotto admitted. “We thought it would not have been the full awards. So initially our calculation was such that [Verstappen] was not world champion.

“But at the end a clarification has been given, which is an okay clarification. So I think it’s simply accepted and that’s the way it is, he’s world champion. I think that it’s clear enough.”