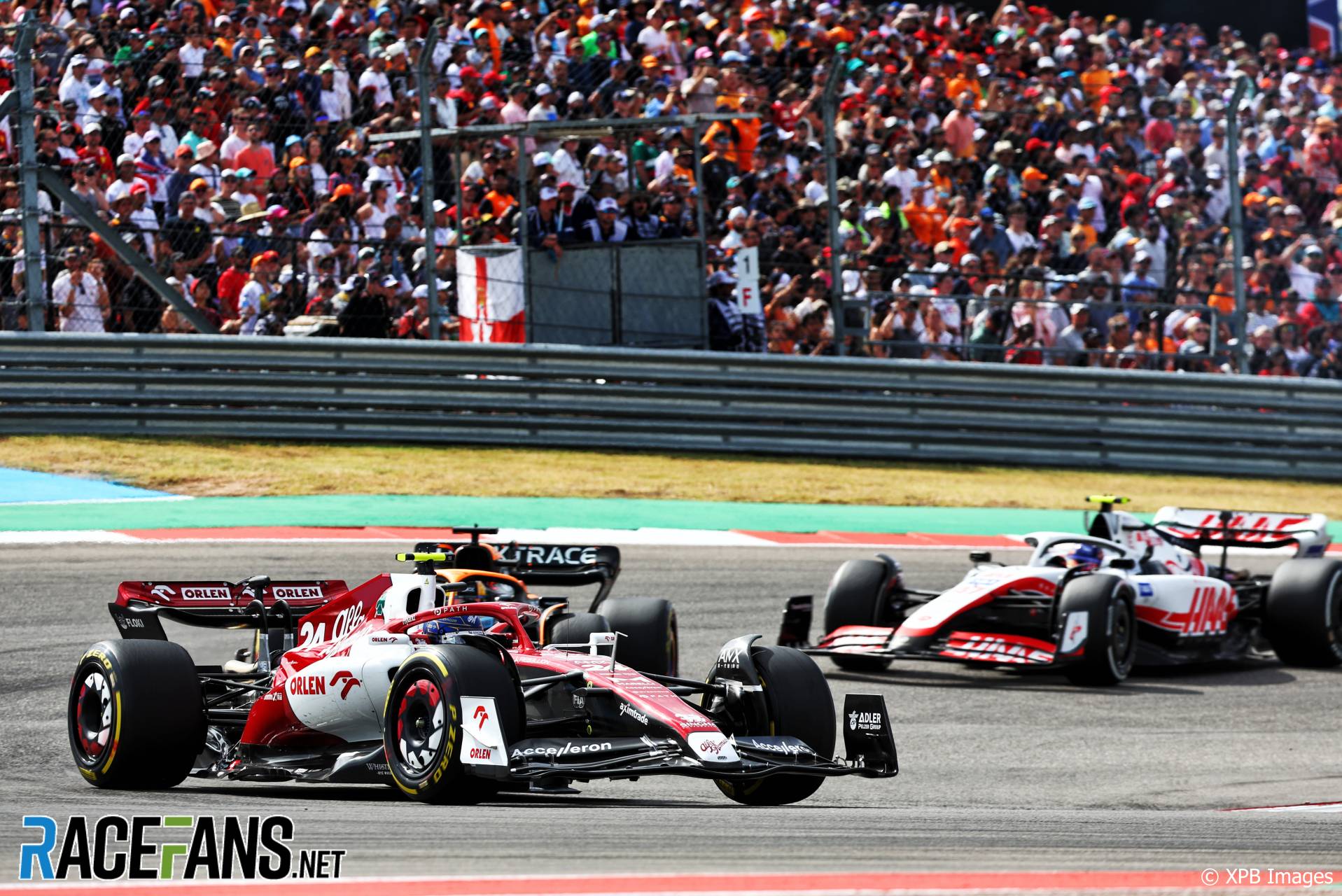 In the round-up: Alfa Romeo’s head of trackside engineering Xevi Pujolar explains the gains Alfa Romeo made from their upgraded floor.

Alfa Romeo have only scored once in the last 10 grands prix, but the team believes their upgraded floor has propelled them back up the competitive order.

Both of the team’s cars had the pace to qualify in the top 10 with the new floor, but a spin for Valtteri Bottas and an 18th place starting position for Zhou Guanyu meant the team failed to score and are now only point ahead of Aston Martin.

“It’s a step that we were expecting, it’s another small step in the right direction,” head of trackside engineering Xevi Pujolar said.

“That brought us close to the top of the midfield. We saw in qualifying that we have both cars coming in Q3 level, and then the lap was deleted for Zhou because he had very slight track limits in turn 12, and it was enough to delete his lap time.

A gust of wind was cited for Bottas’s race-ending spin, and Zhou made it up to 11th place.

“It’s a bit frustrating because the performance was there this weekend with the upgrade. We had potentially yesterday both cars in Q3,” Pujolar added.

“But still this track is possible to overtake and things can happen during the race. So we were quite optimistic to have both cars fighting for the points. It didn’t end up as we expected.”

He admitted Alfa Romeo “struggled a bit too much” with tyre management, but “need to stay positive because we have got a good package now and both drivers are performing very well”.

Flatrock Motorsports Park, a new circuit in US state Tennessee that has been designed by Tilke Engineers and Architects, began construction today.

The track will feature a 5.63-kilometre private Member’s Club layout and a 4.3km grand prix layout and is planned to be completed in the first half of 2023.

The venue also plans to open its own karting track early next year which would be capable of hosting international competitions. Flatrock will be built in phases, with the grand prix loop being added once the main layout is constructed, and other future developments will include an on-site hotel and amphitheatre.

Newly-crowned Formula Regional Europe champion Dino Beganovic will step up to the FIA Formula 3 championship next year with Prema. He has raced exclusively for the Italian team since debuting in car racing in 2020, and is a race-winner in Formula 4 and the Formula Regional Asian Championship.

Beganovic, who has already driven the F3 car in post-season testing, is the team’s second signing for 2023. The Ferrari junior will be team mate to his FREC title rival Paul Aron, a Mercedes F1 junior.

'The list of racecar drivers around the world known publicly to have contracts through 2027 is incredibly short. Max Verstappen with Red Bull. Chase Elliott with Hendrick Motorsports. And now, Colton Herta with Andretti Autosport.'

'The German-based firm stopped manufacturing in and exporting to the country in early March. But now it says it will withdraw from the Russian market and sell shares in its subsidiaries to a local investor. Meanwhile, Ford confirmed on Wednesday that it had finalised a deal to exit the Russian market as well.'

'The championship will break new ground as the first ever FIA-certified Formula 4 series to hold a race meeting around the full, 3.6-mile grand prix layout of Silverstone, held in support of the British Endurance Championship on 23-25 June 2023.'

'16-year-old Higgins will spearhead the Daventry-based squad’s full-time return to Britain’s FIA F4 series next year, having made debut outings at Silverstone and Brands Hatch GP at the end of the 2022 season.'

Max Verstappen has matched the record for most wins in an F1 season, and has three more races in a record-length season to take the record outright. The fact that only five of his 13 wins this year have come from pole position has made his achievement even more impressive to some.

If you just compare Max’s starting positions in each of these races as compared to Vettel and Schumacher, it shows how incredible his 13 race record already his. They’ve had the second best car in qualifying this year, which was never the case for Schumacher or Vettel in 2004 and 2013 respectively. Max has been hit with grid penalties and still won races. Something Schumacher and Vettel didn’t deal with in that season.

Honestly, even if Max doesn’t cross the 13 mark (highly unlikely), I will still rate his season higher than Schumacher’s and Vettel’s seasons.
Todfod