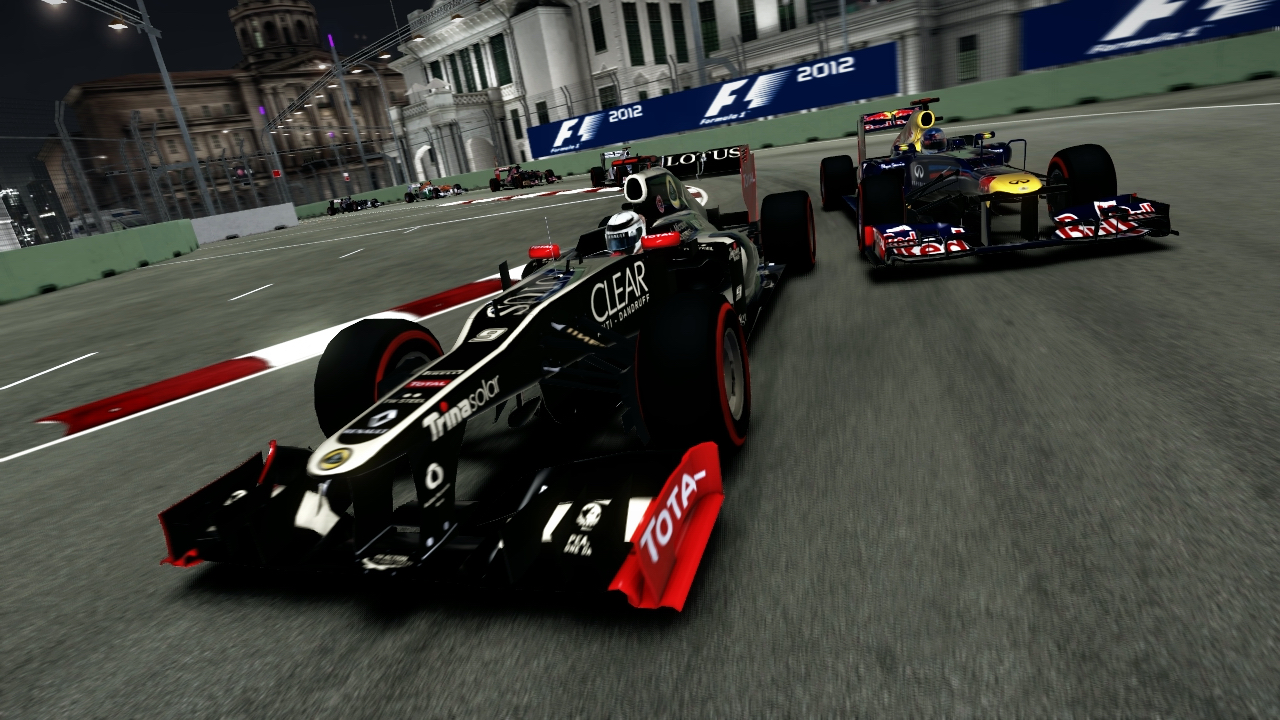 F1 2012 is the third officially-licensed Formula One game from Codemasters for major platforms.

Annual editions of sports franchises face the same problem of trying to introduce something new to the gameplay beyond merely updating to the roster of teams and players – and, in F1’s case – cars and tracks.

Last year Codemasters responded to public demand for the addition of the safety car to F1 2011. That plus major changes such as the introduction of DRS and KERS meant there was plenty to keep players interested.

However it’s hard to say the same of the third edition, F1 2012. At best the franchise seems to be treading water, and insome ways it even feels like a step backwards. The first thing that strikes you about F1 2012 is the change to the menus. Codemasters has dispensed with the “live the life, be the driver” ethos which was a much-hyped part of previous games.

With it has gone the smart paddock-based menu. In its place we have a flat menu which is a little simpler to use but less of a visual treat.

It’s hard to get excited about the headline new feature of the game: the Young Drivers’ Test at Abu Dhabi. This takes the form of a short introduction to the game mechanics.

It will serve those not familiar with F1 very well. But experienced players, or anyone with a basic knowledge of F1, will probably find it rather patronising.

At several points throughout the game it appears Codemasters’ overriding desire has been to make it more accessible to a mainstream audience. This in itself is not a bad thing, providing it is achieved without diluting the game’s appeal as a faithful recreation of the F1 world.

In that respect the Young Drivers’ Test straddles two conflicting demands quite well. I particularly enjoyed spotting upcoming talents like Jules Bianchi and Alexander Rossi in the cars.

But some of the other changes are questionable and, unsurprisingly, Codemasters have come in for a lot of heat for them on their community pages.

For example, the three practice sessions per weekend have been replaced with a single hour of practice. While the team behind the game point out, not unreasonably, that few people used all the sessions, it still seems odd to go to the trouble of removing a feature which was in previous games.

It only serves to weaken the latest game’s claim to be a faithful virtual version of the real thing.

A similar change is the inability to pick which driver to compete as in career mode – you can select the car, but not the driver. Again, this is a case of an option that was available before being removed seemingly for no good reason.

F1 2012’s dearth of new ideas and pandering to the short-attention-span brigade is best exemplified by the ‘season challenge’ mode. This is merely an abbreviated ten-race championship, yet is apparently considered important enough for it to be splashed on the game’s box.

The new ‘champions mode’ at least has a little character to it. It offers a series of levels in which you compete against each of the current world champions. It’s an entertaining diversion from the main game, but not something that’s going to occupy you for long. Happily, the racing dynamics remain as strong as ever and this is what makes the game so easy to recommend. It’s as much fun if you want a quick thrash-and-crash on a joypad, or to immerse yourself in it by hooking up a steering wheel and pedals for a full two-hour expert mode race in Monaco in the rain.

The car models are lusciously detailed, particularly given that the game’s engine has to cope with a 24-car field. As ever they are fixed at their round one specification, so if you were especially fond of the sloped nose on the McLaren the news is good.

The tracks look great and of course you have the new Circuit of the Americas to play with. Although, as was the case with Korea in 2010 and India in 2011, you have to wonder how realistically anyone can model a track which isn’t finished and which the real cars haven’t raced on yet.

The weather system has always been one of the game’s strongest cards, and it’s been further enhanced this year with the introduction of localised variations. So now you may have to cope with a track that’s wet in one place while still mainly dry elsewhere.

Rival drivers give you a hard time, covering their racing lines to deter you from passing. The penalty system is harsh but, for the most part, fair.

The best new addition to the game is the lap tutorials. Narrated by Anthony Davidson, they give excellent tips on how to drive F1 2012’s 20 different circuits.

But while the game remains terrific fun to play, it’s disappointing to see the lack of progress on some of its key shortcomings.

While much effort has clearly been put into getting the game dynamics right, it all falls apart when cars make contact with each other. They feel unrealistically solid and hard to damage, even on the toughest difficulty levels.

The basic replay system still prevents you from viewing what happened elsewhere on the track during the race, and in-race replays are very short.

Codemasters have removed tyre wear scaling from this year’s game, meaning that tyre performance degrades at the same rate in shorter races as it does in full-length races. They have been pilloried for it in their forums.

In other respects Codemasters have added detail to the tyre wear model – for example, by reflecting differences in wear rates between different cars (the team asked the author for his views on this subject while the game was in development). If having this more sophisticated tyre model means the ability to scale the wear rates to different race lengths had to be sacrificed, then so be it. F1 2012 is a competent racer which packs in many of the essential features of modern F1 racing. For all its niggling faults and shortcomings, the core game remains highly entertaining in both single- and multi-player modes, and is enough to keep it at four-star level.

But while Codemasters have continued to refine the core game, it’s disappointing to see some changes have resulted in a less faithful recreation of the Formula One universe.

The new game modes amount to little more than rehashing the same content in a different way. It feels like an attempt to make up for the lower track and vehicle count than those boasted by games like Forza Motorsport 4 and Gran Turismo 5.

Codemasters have recently been granted an extension on their license to produce the official F1 game. They have extended the franchise to include the browser-based F1 Online The Game and forthcoming Mario Kart clone Race Stars.

Candy floss titles like this have their place, but they’re no substitute for a fully-featured, realistic F1 racing game.

Earlier this year F1 Fanatic readers voted Codemasters’ titles the best F1 games of all time. Future versions may not be as warmly received if they are simply going to ring the changes from year to year without addressing the considerable scope for improvement that remains.