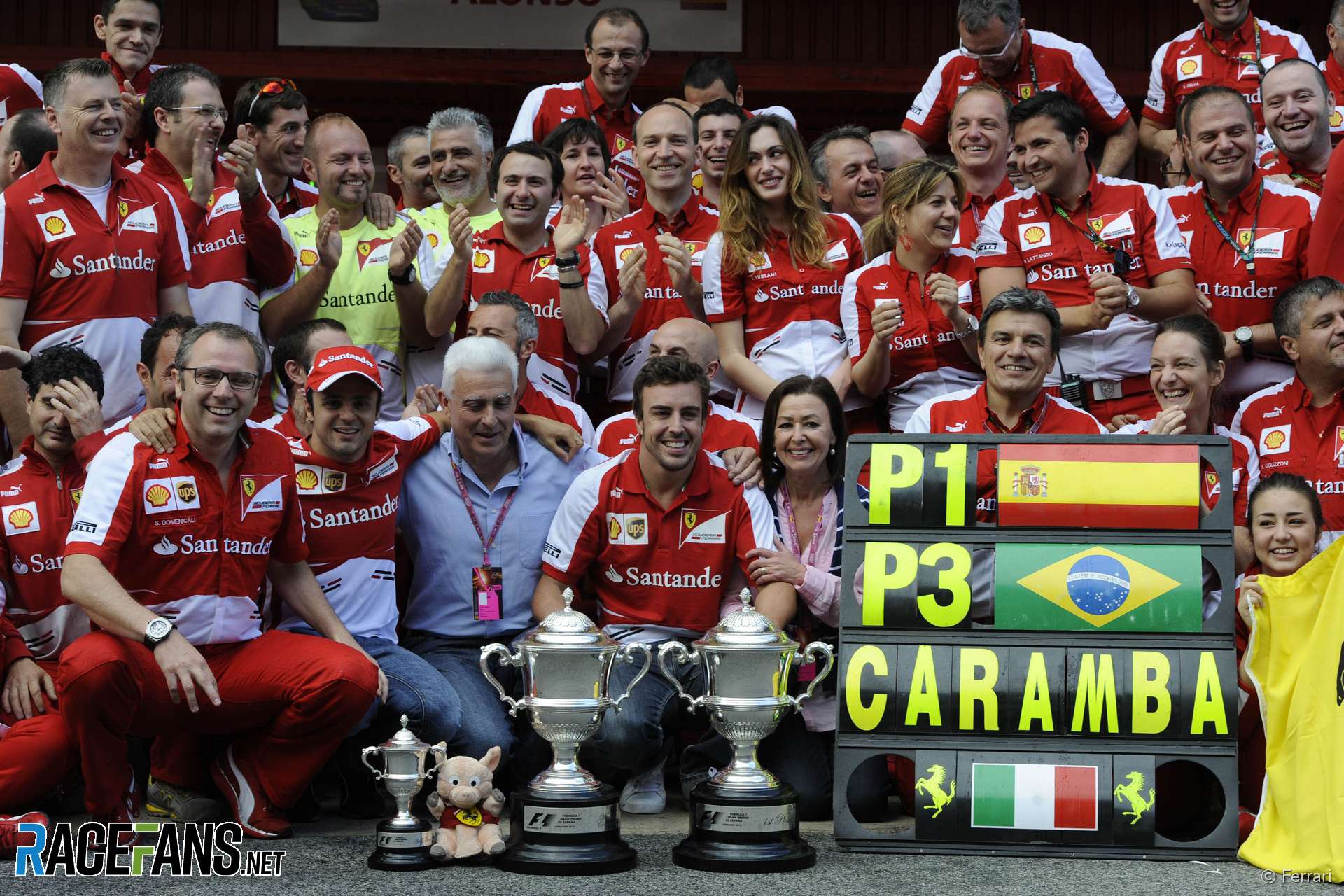 Fernando Alonso has made some excellent starts in his Ferrari. Lining up fifth on the grid for his home race, with title rivals Sebastian Vettel and Kimi Raikkonen already in front of him, he needed another good one today.

When the red lights went out his F138 found the instant purchase he needed. But on the long, narrow run to turn one there simply wasn’t room for him to capitalise. If this had been Sepang he might have had the pace to sweep by the lot of them into the lead.

Instead he cancelled his KERS and focused on getting an ideal run out of turn two. Poised behind Raikkonen and Hamilton, he jabbed the KERS button again and swept around the outside of the Lotus and the Mercedes, completing a crucial first-lap jump from fifth to third.

With that he was halfway towards a valuable victory on home ground.

The two Mercedes drivers occupied the front row of the grid, as they had in China. But the performance of the W04 over a race stint remained a cause for concern. Lewis Hamilton had covered the equivalent of one-and-a-half race distances in pre-race practice – despite rain affecting the first day’s running – as the team tried to coax the fragile Pirelli rubber into giving more grip for longer.

Over a single flying lap, the silver cars were untouchable. But the instant the lights went out on race day both drivers were tentative, defensive. Vettel and Alonso demoted Hamilton on the first lap. Raikkonen and Felipe Massa followed before the first stint was over. Ferrari committed early to running a four-stop strategy: Massa was the first of their drivers to put, diving in on lap eight immediately after passing Hamilton. Alonso came in the lap after.

This gave him the advantage of the undercut over Vettel. Despite Red Bull producing what turned out to be the second-fastest pit stop of the race, Vettel emerged from the pits just in time to see Alonso beat him to the first corner.

Soon after Alonso zapped past Rosberg on the main straight using DRS. Vettel scrabbled past a few corners later on the run towards turn seven – an unlikely spot for passing on the Circuit de Catalunya.

At this point it looked as though we might be treated to a battle for victory between the two multiple champions. But it wasn’t to be.

Red Bull were planning to run Vettel on a three-stop strategy. As Alonso went by Vettel’s race engineer Guillaume Rocquelin reminded him the final laps would be decisive. But as the second stint unfolded the team realised they were over-stressing their front tyres. As Alonso disappeared up the road, Red Bull consigned themselves to running an identical strategy, and Vettel’s RB9 was soon under attack from Massa and Raikkonen.

Behind the lead quartet Mark Webber bounced back from a poor first lap to hold fifth place. There was no question of what strategy he was on: a four-lap strategy had been an inevitablity once he made his first pit stop on lap seven.

Sutil out of luck again Meanwhile Hamilton was reversing his way down the running order. At one point he was passed by Pastor Maldonado, who had only out-qualified the Caterhams and Marussias, leading Hamilton to ask his team just how dire his situation was.

They reassured him that points were still possible. But having qualifyied on the front row Hamilton was doomed to finish outside the top ten, mystified by his car’s inability to prolong the life of its tyres.

The seriousness of his plight had become clear after his first pit stop, after which he seldom ran inside the top ten. Among those to jump him at the first stop was Paul di Resta, who by this point was the only Force India still in contention.

Adrian Sutil had made a cracking start, diving around the outside and picking up five places to take eighth. But a cross-threaded wheel nut at his first pit stop held him up so long he had to switch his engine off. The time lost ruined his race.

On the same lap that Sutil’s drama unfolded, Romain Grosjean arrived in the Lotus pit with a right-rear suspension element broken. That brought his participation to an end and with it Lotus’s streak of finishing every race with both cars in the points. The other Lotus eventually emerged as Alonso’s closest threat for the lead. While the Ferrari drivers switched to hard tyres for their second and third stints Raikkonen persisted with the mediums. Despite losing some time behind Vettel he stayed close enough to Massa to regain second place when the Ferrari driver made his final pit stop on lap 51.

Alonso had made his last visit to the pits two laps earlier. His stop had to be brought forward due to a slow puncture, but aside from that he never looked at risk of losing his lead. Nor could Massa make enough of an impression to challenge Raikkonen for second. And the Ferrari driver had a comfortable margin over the two Red Bulls, meaning the final laps passed with little contest for the first five places.

Surprisingly, Rosberg was the first driver home after Raikkonen to complete the race with just three stops. His pace in the last stint was good enough to keep Di Resta at arm’s length.

The two McLaren drivers were behind them. Sergio Perez had jumped up to sixth at the start before being passed by Massa. In the closing stages his race engineer urged him to go after Button and Rosberg, expecting their tyres to wilt. When that didn’t happen he cautioned Perez to treat his own tyres with care.

Daniel Ricciardo spent the final laps under severe pressure from Esteban Gutierrez, but stayed ahead to add another point to his tally. Gutierrez bounced back from his qualifying penalty to lead the race for two laps after the front-runners made their first pit stops – the Sauber driver enjoying what was surely his best race of the year so far.

His team mate Nico Hulkenberg was given a stop-go penalty after Sauber released him from his pit box as Jean-Eric Vergne was coming in. The pair collided and Hulkenberg had to pit for a new front wing, costing him further time.

Vergne suffered a tyre de-lamination that may have been related to the contact. Shortly after it was replaced Toro Rosso called him back into the pits to retire due to the extent of the damage. Making matters worse for the team, Ricciardo had to stay out an extra lap at one point while Vergne was still stuck in the pits.

Caterham also fumbled a pit stop for Giedo van der Garde, sending him out with a wheel not properly attached. Once the error was discovered they urged him to try to get back to the pits – a course of action which other teams have discovered can attract a severe penalty. Sure enough Van der Garde’s wheel came off, forcing him to retire, and Caterham were fined for the incident.

However Charles Pic came home ahead of Jules Bianchi, who had to change his wing on the first lap, and Max Chilton, who had a slow pit stop. With his third victory on home ground Alonso will be hoping he’s drawn a line under Ferrari’s early-season jitters and can refocus his efforts on securing that longed-for third world championship.

After a series of races dominated by tyre degradation the next race at the low-grip Monaco circuit may bring a welcome change.

Pirelli were quick to point out the spectacle of most drivers making four pit stops each was not what they were intended to create. They are already planning further changes to the tyres to address it.

45 comments on “Alonso hits back with home win”