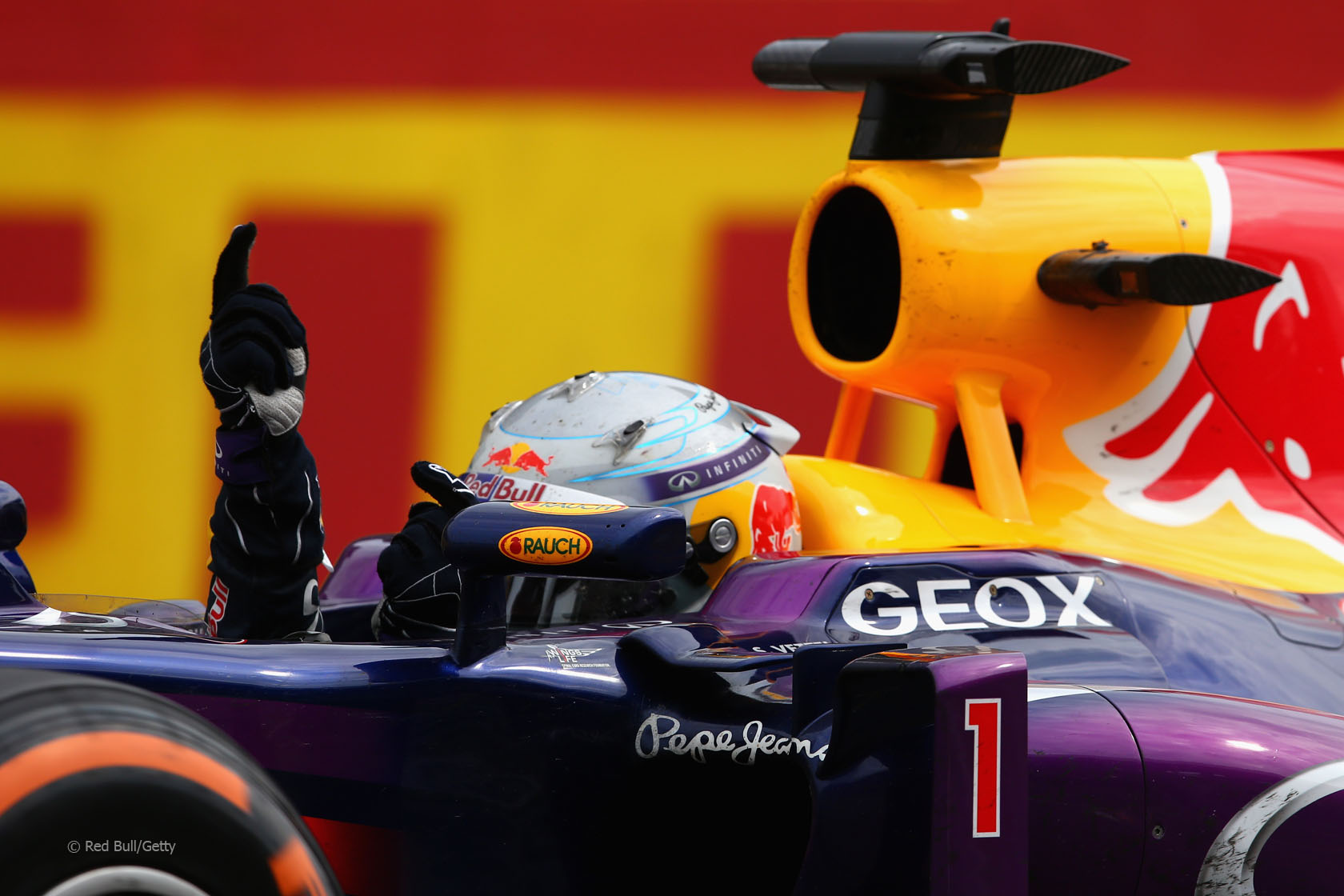 Arriving at Monza, Fernando Alonso said he had two goals for the race: to finish on the podium, and to finish ahead of Sebastian Vettel.

Given the championship situation he surely cared more about the latter than the former. But at the chequered flag, as he scored his fourth podium finish as a Ferrari driver in Italy, he trailled just one of his rivals: Sebastian Vettel.

With Lewis Hamilton and Kimi Raikkonen losing further ground the championship contest looks to be between the two drivers who finished first and second today – if there’s much of a contest left to speak of. After two days of sunshine clouds loomed at an overcast Monza ahead of the Italian Grand Prix. A shower hit the GP2 sprint race earlier in the morning. F1 drivers headed to the grid on intermediate tyres after fresh rainfall.

But come the start of the race the track had dried and almost all of the drivers were on the medium compound slick tyres. With most of the planning to pit just once, the tyres would need some looking after.

That is exactly what Vettel didn’t do as he hurtled towards the first corner with 21 of his rivals chasing him. He snatched the front-right brake and had to keep the pressure on the pedal to slow the car and ensure he turned in to the first corner.

Behind him Sergio Perez dodged in front of Kimi Raikkonen, who then nudged the McLaren as they brake for the Rettifilio. Perez bumped over the escape road while Raikkonen traipsed back to the pits, his front wing broken.

The other Lotus was involved in a collision at the second chicane, but Romain Grosjean was blameless: Paul di Resta hit his right-rear wheel with such forced that it smashed the Force India’s suspension. Grosjean’s car impressively remained intact. While Vettel pulled away from Felipe Massa, Mark Webber had slipped back and was being hounded by Alonso. It only took until lap three for the Ferrari driver to break his defences with a superb move on the outside of the Roggia chicane.

“Mark had a little slower exit in the first chicane,” Alonso explained. “So I used all the KERS on that straight hoping that with the KERS plus the slipstream it will be enough to pass, but it was not enough so that we arrived side by side.”

“At one point, I thought ?ů‘ťľ?£well, I will miss the second chicane and I will give the place back?ů‘ťľ‘šů but at the last moment I get the grip.”

Webber considered edging his rival wide, but perhaps thought back to how Massa did the same to him two years ago, which had consequences for both drivers, and thought better of it.

“I could have been I think a little bit naughtier,” he said, “bit harder maybe for him and smashed him on the kerb a bit harder. But in the end that can also put both of us out.”

Alonso was now in third and his subsequent promotion to second was a foregone conclusion. Sure enough on lap eight Massa slowed down by a full second and then let his team mate past.

Vettel radioed his team more than once asking them to keep an eye on his damaged front-right tyre. “We are monitoring it, we known it’s not good,” said race engineer Guillaume Rocquelin. “No concern with right-front for now.”

Behind him Alonso spied Vettel’s rain light – which drivers have to use in wet conditions – was flashing despite the track still being dry. He notified his team on the radio, which race director Charlie Whiting also listens in on. “It was disturbing a little bit,” Alonso explained afterwards, “obviously it?ů‘ťľ‘šůs a very strong light with no rain”.

Vettel wouldn’t need his rain light – the showers stayed away for the rest of the race. His tyre damage raised the prospect of having to pit twice instead of once, but that proved unnecessary: “Fortunately we weren?ů‘ťľ‘šůt front limited on this circuit, so the front tyre was not a big issue,” said Vettel later, “so I tried to look after the rears after that and we still got far enough to make the one stop work”.

Nonetheless Red Bull brought him in slightly early to be on the safe side. They also summoned Webber in on the same lap, as the pair were separated by almost 11 seconds on the track, giving the well-drilled Red Bull pit crew enough time to service both. Impressively, Vettel and Webber’s complete stop times were among the four fastest of the race.

Webber’s rapid stop gave him the chance to undercut Massa for third. The one-and-a-half seconds Webber took from the Ferrari on his out-lap was enough, and Massa lost another half-second in the pits to seal the deal.

Alonso’s only remaining card to play was to drag out his first pit stop as long as possible, giving him fresher tyres for his last stint. A rain shower at this point would have tipped everything in his favour, but the clouds were not obliging. With Webber pressing on Alonso had to come in on lap 27 to ensure he didn’t lose the place. Behind the lead quartet of Red Bulls and Ferraris the chase was, remarkably, led by Nico Hulkenberg. The Sauber driver held onto his fifth place after his lap 24 pit stop, until Hamilton took it off him on lap 32.

But this was only a temporary state of affairs. Hamilton had a second pit stop looming, having made an early visit to the pits on lap 13 due to a slow puncture, possibly caused by debris from the Raikkonen-Perez collision. His radio had also malfunctioned, meaning his team were having to make several attempts to pass each message.

Hamilton’s second pit stop on lap 38 promoted Hulkenberg back to fifth, Nico Rosberg sixth and Daniel Ricciardo seventh – the trio back where they started and where they would finish.

Hamilton rejoined the track behind another driver who’d made an enforced early visit to the pits – Raikkonen. The pair made their way back towards the points, passing Esteban Gutierrez and Adrian Sutil in succession.

But Hamilton wanted to force a faster pace than Raikkonen, and five laps from home he passed the Lotus. The two McLarens capitulated on successive laps – both struggling with a seventh gear ratio that had been set too short – and Hamilton produced the fastest lap of the race as he pressed on after Grosjean.

The Red Bull drivers had gearbox problems of a more serious nature. The team had replaced the fifth, sixth and seventh gears in their cars ahead of the race and Webber’s car had several other parts replaced as well.

Webber was the first of the two to be warned to short-shift to guard against further damage. This came at an inconvenient time as he had latched onto Alonso’s tail and, with the benefit of DRS, was beginning to put him under pressure.

Soon Vettel was getting a similar message about his gearbox. It was a problem the team had been alerted to earlier in the weekend but were not expecting a repeat of during the race. “We already saw something on Friday,” said Vettel afterwards, “Friday to Saturday we changed the gearbox and then I think in the race it was a surprise.” With memories of Vettel’s race-losing gearbox failure at Silverstone in their minds, the final laps were a tense affair for the Red Bull team. Finally Vettel rounded Parabolica for the 53rd time and, despite having backed off enough to allow Alonso within five seconds of him, gunned it towards the line for his sixth victory of the year.

Alonso kept his streak of home podiums for Ferrari going. For Webber, his twelfth and final appearance at Monza as an F1 driver saw his first visit to the podium.

Massa was not far behind in fourth and nor was the impressive Hulkenberg. The Sauber driver seemed happier on the hard tyres in the second half of the race than the Ferraris were, and withstood race-long pressure from the other Nico to claim his team’s best result of the year so far.

Ricciardo took seventh after team mate Jean-Eric Vergne dropped out with a blown engine. He and Grosjean began the final lap under pressure from Hamilton but the Mercedes driver ran wide at the Roggia chicane and had to settle for ninth.

Button took the final point for tenth, suffering severe vibrations from a flat-spot. Raikkonen failed to score for the second race in a row – following his record-breaking run of points finishes – coming in 11th ahead of Perez, Gutierrez and the Williams drivers.

Adrian Sutil stopped in the pits with brake problems on the final lap. Caterham again had the beating of Marussias – Charles Pic coming out on top of the quartet of cars. Vettel’s triumph means he has now won more than half of the races so far this year. He is also more than two wins clear of Alonso in the points standings, with Hamilton and Raikkonen over three wins’ adrift.

Most worrying for his rivals, Vettel won at a track which historically has not played to Red Bull’s strengths, something he mentioned to Adrian Newey as they headed towards the podium and the jeers of the tifosi.

“On the way up to the podium, he said ‘I thought that it was going to be damage limitation this weekend,'” Vettel recalled.

“I said to him ‘well, if damage limitation is like that, I want to have a lot of damage for the rest of the season’.”