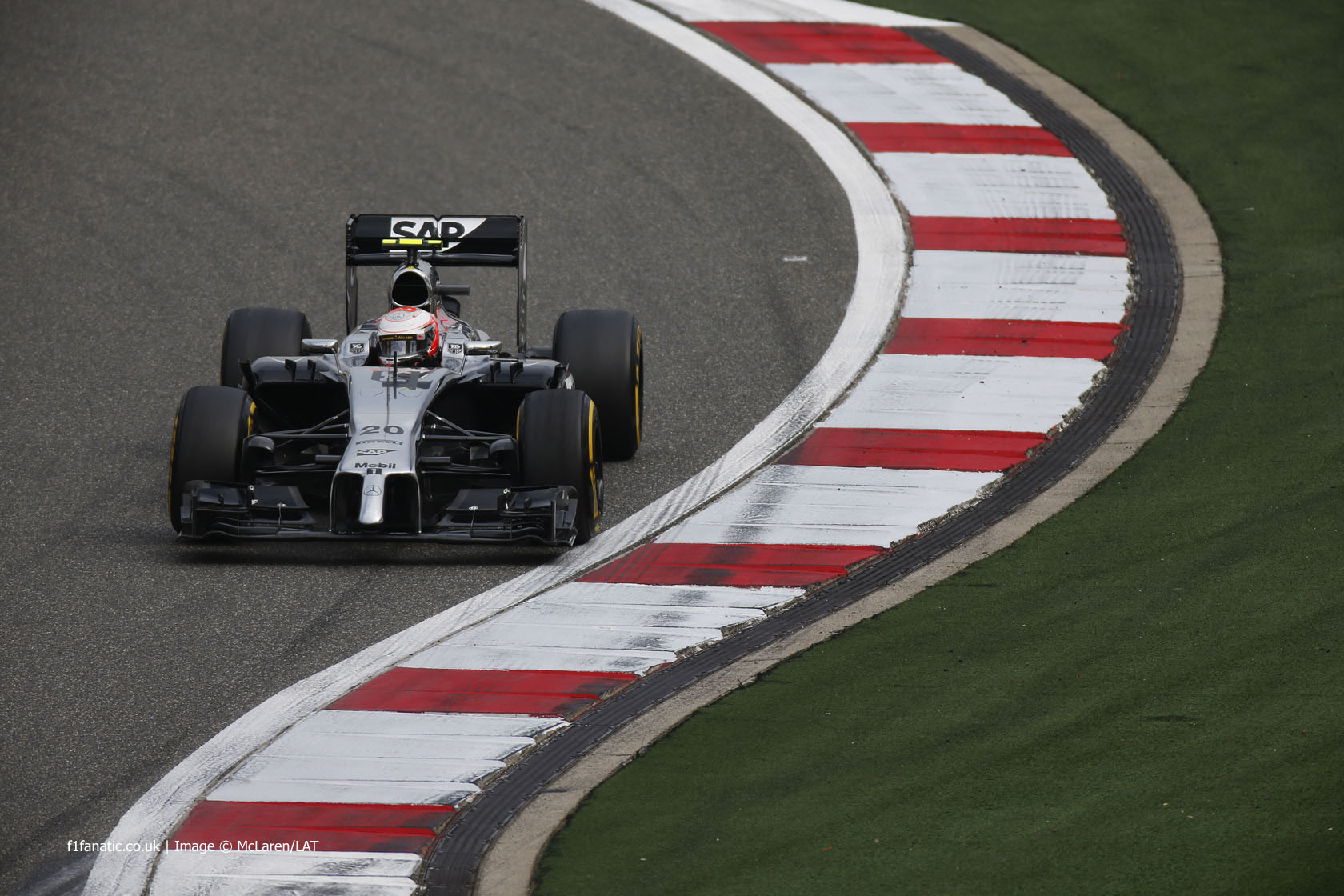 Start with a low-grip track surface. Add the coolest track temperatures of a dry session so far this year.

And throw in a circuit where the cars pass through two medium to high-speed turns of more than 270 degrees.

These conditions are a recipe for tyre graining, where small pieces of rubber form on the surface of the carcass, ruining the performance of the compound.

Judging by the radio messages during the second practice session, every driver struggled with this on their race-preparation runs. They tweaked the settings on their steering wheels to try to cure it and cranked up their front wing angles when they switched to the harder tyres.

Some drivers, like Kevin Magnussen, were having their first experience of the Shanghai International Circuit, where this is a common problem.

“The first corner here is very tricky, and that’s where you do the damage to the front tyres,” he said.

“I don’t know why we’re not as competitive as we’ve been in the previous races, but we have a lot of front tyre degradation – and we need to investigate why. In fact, I’ve never had this much front tyre graining – it’s very difficult to deal with, so we’ll adjust the set-up and my driving style to compensate. It’s a new track for me, too, so I need to adapt to that.

“We’ll try to solve things overnight – but, if it rains tomorrow, at least we won’t have any front tyre graining.”

The local weather forecast still calls for rain tomorrow, and if we do get our third wet qualifying session in four races drivers won’t be worrying about graining. At least not until Sunday, when the weather is expected to be dry again, and the loss of Friday’s rubber build-up due to the rain will put the track right back to square one. Ferrari are also in the spotlight but they are subject to even greater attention this weekend after their poor race in Bahrain was followed by the shock resignation of Stefano Domenicali on Monday. Today they were ‘best of the rest’ behind Mercedes on pure lap time.

But rather than being a sign that they have suddenly found some performance in the F14 T this appears to be a reversion to the form we saw before Bahrain, where they were the second-fastest team on Friday in Australia and Malaysia as well.

The one-second-plus performance advantage Mercedes had in the first three races is no doubt hiding behind a hefty slug of fuel in the tanks of the two W05s today. Lewis Hamilton may have ended the day quickest but he was clearly unhappy with the balance of his car and has some progress to make overnight.

Nico Rosberg was third fastest but was advised to back off by two-tenths of a second in the final sector due to the yellow flag caused by Pastor Maldonado. It looks like he eased off a little more than necessary as he lost almost all his time to Hamilton in that sector.

Note also both W05s enjoyed a 3kph straight-line speed advantage, indicating they can afford to add more wing to improve their tyre management.

Red Bull, who surely enjoy the best car in the field in terms of sheer downforce, seemed the least troubled by graining. At the end of his race stint Daniel Ricciardo’s race engineer Simon Rennie complimented him on his long run on soft tyres during which he went further than anyone else.

22 comments on “Raining and graining are the concerns in China”