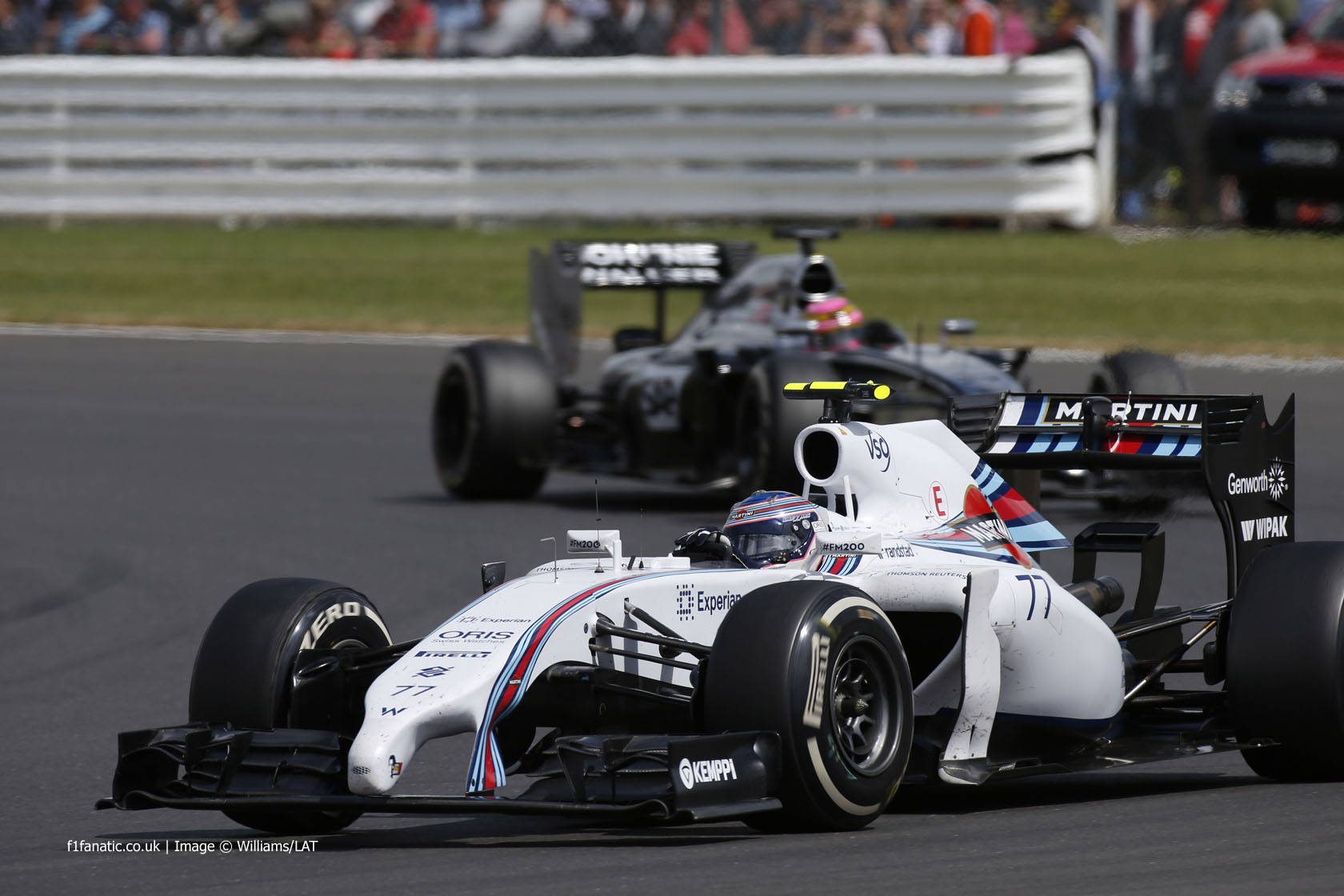 Valtteri Bottas has won the Driver of the Weekend vote for the second race in a row after his storming drive to second place in the British Grand Prix.

Bottas received 52.5% of the vote to top the poll ahead of another big mover in the race – Fernando Alonso. The Ferrari driver took 18.5% of the votes after his ten-place climb to sixth.

Jenson Button was voted in third place after just missing out on his first ever home podium, receiving 11.8% of the vote and making his first top three appearance of the season.

For the second race in a row the winner did not feature in the top three of the vote. Lewis Hamilton came fourth in the poll after his costly error during qualifying when he abandoned his final flying lap which eventually cost him five places on the grid.

After a front row lock-out in Austria, Williams came back down to earth with a thud during qualifying for the British Grand Prix, as both cars were knocked out in the damp Q1 session due to a strategic error.

Penalties for other drivers promoted Bottas to 14th on the grid and he made the most of it, moving up to ninth in the few corners of the first lap before the red flag came out due to the carnage which broke out behind him.

When the racing resumed he scythed past Daniil Kvyat and Daniel Ricciardo, and a lap later disposed of Nico Hulkenberg as well to move into sixth.

Two more overtakes later on moved him ahead of both McLarens and a superior strategy got him ahead of Sebastian Vettel as well, moving into a comfortable third place. Bottas then settled down to manage the rest of his race for a run to the flag – and his second third place podium in a row – only for Nico Rosberg’s retirement to hand him his best-ever finish of second.

What a race by Bottas. Something you could expect from a champion, not a guy in his second season. He made up twelve places in the race and all but one were on track. Didn’t make any real mistakes and all this despite not running at all in free practice one.
@Retardedf1sh

I went for the driver who had his qualifying screwed up by his team, yet was in the top ten by the end of the first lap. Not only this, but he pulled some fantastic moves on world champions and ended up on the podium.
@Craig-o

A bit harder this time, but Bottas really stood out. His qualifying position wasn’t his fault, so it can’t be assessed. But he went like a storm through the grid during the race. To come from fourteenth to second is a remarkable achievement in the second or third-fastest car. His overtaking moves were cracking and he also managed his tyres brilliantly, even though he was on attacking mode during half of the race.
@Osvaldas31

Williams weren’t the only team to get it wrong in qualifying and have both drivers eliminated: Ferrari did too. Alonso also spun during his final effort in Q1.

It’s been a while since Alonso started as low as 16th on the grid, and when he came to take his place for the start he rolled too far forwards and wasn’t able to reverse back into position before the lights changed. He was eventually handed a five-second penalty.

Having started on hard tyres he took advantage of the red flag on lap one and got rid of them, running on mediums for the rest of the race. The strategy propelled Alonso into a strong points position, although a handling imbalance caused by debris in his rear wing made life difficult.

Nonetheless when Vettel came out of the pits ahead of him Alonso seized the opportunity to pass the Red Bull around the outside at Copse, and frustrated his rival’s progress for over a dozen laps. The Red Bull driver eventually made it past, while both drivers complained about each other abusing track limits, something Alonso was warned about earlier in the race.

I’ve chosen Alonso because he had to work really really hard in both:

Attack mode: In a car with a clear deficit in straight-line speed compared to Mercedes powered teams he was able to execute some outstanding and well planned overtaking manoeuvres with aggressiveness and style, positioning his car outside the typical racing line along several corners.

Defensive mode: Performed great skills defending from Vettel’s attacks with tyres that were around ten laps older and succeeded for almost fifteen laps against a car with a great traction advantage compared to the F14 T.
@F1ismydrug

That move on Vettel at Copse by Alonso makes the Spaniard come out on top against Bottas, who did not spend the whole race battling and had a better car.
@Fixy

While others fell around him and made errors, Button kept his head and drove like he usually does in tricky conditions to claim third on the grid.

Very few expected him to be able to maintain the position in the race – indeed Bottas and Ricciardo both fought through. A measured drive however kept him at towards the front and on fresher tyres he was bearing down on Ricciardo at the end, just missing out on a first-ever home podium.

For me it has to be Button. He wrung the neck of the McLaren all weekend, and in qualifying took it somewhere it had no right to be. That, coupled with a brilliant race for him, keeping well up the field and running Ricciardo in the superior Red Bull very, very close indeed.

Bottas was another consideration, but in the end, Button delivered the goods all weekend, and we’ll never know whether Bottas would have actually put that car where it should have been, or whether he would have made a mistake. For that reason, Button was the only choice that made sense to me.
@Mathers