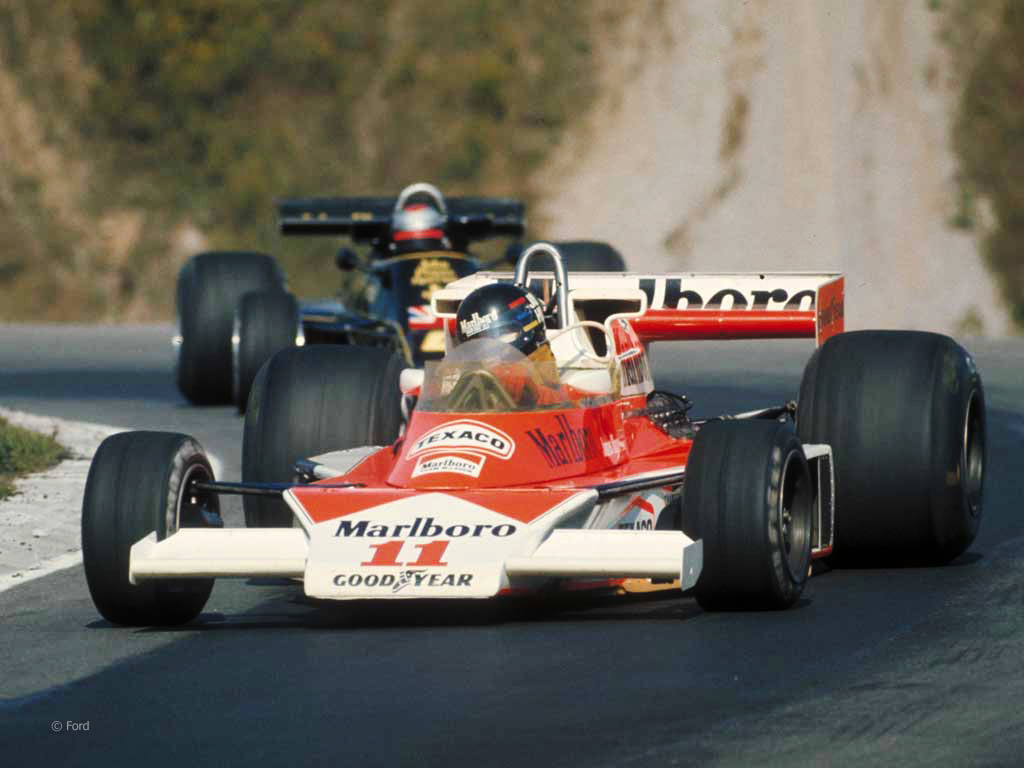 The 1976 F1 season was one of the most storied in Formula One history, as an injured Niki Lauda fought in vain to keep James Hunt from snatching the title away from him.

But as the season began Lauda’s championship defence seemed a straightforward prospect. Hunt was still getting to grips with his new McLaren following his sudden promotion from Hesketh as the first race of the season got underway 40 years ago today at Interlagos in Brazil.

The early start to the championship should have been even earlier. The championship had been due to begin at Buenos Aires but amid political unrest in Argentina, which led to a coup d’etat two months later, the race was cancelled leaving Brazil to host the curtain-raiser.

The Brazilian Grand Prix was an early example of Bernie Ecclestone’s success in bringing Formula One to new countries. Ecclestone, then the head of the Formula One Constructors’ Association as well as Brabham team principal, had persuaded television network Rede Globo to back a non-championship race in 1972 to capitalise on the success of Emerson Fittipaldi, who went on to win the drivers’ title that year.

With government support it became a championship round from 1973. Fittipaldi won the first two editions, Carlos Pace added another home win in 1975 and the race has been a fixture on the calendar ever since. But at the beginning of 1976 the F1 world was eager to see whether the two-times champion’s shock career move would pay off.

Fittipaldi had finished runner-up to Lauda the previous year but in November he decided to embark on an ambitious new project, leaving McLaren behind to drive for his brother’s team. Wilson Fittipaldi had driven the car with little success in 1975, but the younger Fittipaldi had tested it occasionally and was pleased to discover the new chassis handled superbly around the long, 7.9km Interlagos track.

His decision was a blow for McLaren, who scrambled to find a driver in the final weeks of 1975. Just 19 days after Fittipaldi walked out, the team announced Hunt would join them for 1976. It was in part a marriage of convenience, as Hunt’s Hesketh team had run out of money. But despite the 28-year-old’s reputation for being crash-prone he had finished fourth in the previous year’s championship, won the Dutch Grand Prix, and taken top five finishes in six of the previous seven races.

If Fittipaldi’s change of teams was a shock, the performance shown by the Cosworth-powered FD04 chassis in practice was a revelation. The silver car bearing the multicoloured logo of Brazilian state sugar and alcohol producer Copersucar was third-quickest on the first day of running.

The Ferraris were immediately near the top of the times sheets. The team enjoyed the benefits of a largely consistent line-up heading into 1976: Lauda remained alongside Clay Regazzoni at the wheel of the team’s 312Ts, which were little changed from the previous year and had benefited from more testing. One key personnel change, however, was the departure of team principal Luca di Montezemolo, replaced by Daniele Audetto.

While McLaren were also using an evolution of their successful 1975 car – in fact the M23 had been winning races since 1973 – it was largely new to Hunt. He had managed just two runs in the car since signing for the team and these had proved inadequate even for getting his seat right.

The first day in Brazil was therefore spent getting him comfortable in the car, following which an engine failure delayed him further. Hunt was also experiencing life with a team mate for the first time in F1 – Hesketh had been a single-car operation – and he was quick to assert himself over Jochen Mass in the other car.

Following a confrontation with team boss over suspension settings Hunt made it back on the track in time for a flying lap. In the days before the teams had access to all their rivals’ lap times instantaneously, it took a while for word to filter back to McLaren that their new hire had just pipped Lauda to pole position by two-hundredths of a second.

It was Hunt’s first pole position, which he described as “very good for the ego and very bad for the nerves”. The team’s success was all the sweeter for coming at their ex-driver’s home track. Fittipaldi wound up fifth on the grid, nursing a wrist injury incurred during a tennis match. Between him and Hunt were the two Ferraris plus Jean-Pierre Jarier’s Shadow, which had been on pole at the same track 12 months earlier. Mass was sixth after a fire extinguisher went off in his car during qualifying.

Defending race winner Pace could only manage tenth on the grid as Brabham’s flat-12 Alfa Romeo-engined car made its first appearance. The red-liveried car with tall intakes on its sidepod was around 25 kilogrammes heavier than predecessor despite chassis designer Gordon Murray’s best efforts to keep its weight down.

His team mate Carlos Reutemann was an unhappy 15th on the grid insisting – to Ecclestone’s denials – he’d been told he would have a 1975 Cosworth-engined BT44B for the first race if the new car wasn’t quick enough. While the 1976 pole position time was around two-and-a-a-half seconds slower due to track changes, the Brabhams were three-and-a-half seconds off their 1975 pace.

Mario Andretti and Ronnie Peterson struggled with Colin Chapman’s latest innovation, the ‘all-adjustable’ Lotus 77 which could run in different combinations of wheelbase length and track width. For this circuit it was in a short and narrow configuration but both qualified outside the top 15, Peterson having crashed early in practice after a car failure caused water to spray onto a tyre.

Ligier appeared on the F1 grid for the first time courtesy of Jacques Laffite, who qualified behind Pace. And Frank Williams was running two different cars: an old FW04 for Renzo Zorzi and a Hesketh 308C, re-named a Williams FW05, run for Jacky Ickx. Both were well down.

In an attempt to create more orderly starts the practice of waving a national flag to set the cars off had been scrapped. Starting lights were used for the first time, but the signal was given very quickly and many of the drivers towards the back of the field were still moving when the race got underway.

Pole sitter Hunt, anxious not to burn out his clutch, was among those caught out and both Ferraris flashed past him on the right, Regazzoni ahead of Lauda. Hunt kept a hold on third place ahead of Vittorio Brambilla, the March driver having shot forward from seventh, and Jarier.

Lauda, second, was concerned about Jarier’s potential pace later in the race. On lap nine he drew alongside his team mate as they passed the pits and moved into the lead. Hunt was quick to follow him through.

Regazzoni had got in trouble at the final race of 1975 for delaying Lauda’s rivals while being lapped, but his efforts to keep Jarier behind only caused problems for himself. The pair made contact and Regazzoni was forced him into the pits with a flat front-right tyre. Mass had also tangled with Jarier and pitted for a new nose.

While Lauda edged clear Hunt found himself pursued closely by Jarier, the upgraded Shadow DN5B liking the long Interlagos curves much as its predecessor had. Hunt soaked up the pressure until his McLaren developed a fault.

A fuel injection trumpet came off Hunt’s DFV during the race which initially deprived him of power. The trumpet when lodged in a throttle slide, jamming the throttle open and causing him to spin off. He pressed on, but a damaged oil cooler finally forced him to stop for good.

However Jarier was unable to benefit from Hunt’s misfortune. With no oil flag being shown where the McLaren had dropped it at the Sargento corner Jarier skidded off and crashed. The oil almost claimed his team mate as well: Tom Pryce had started a lowly 12th due to an engine problem in qualifying but had fought his was up to second when he skidded on the same oil.

Pryce rejoined the track, though Patrick Depailler’s Tyrrell had already gone by into second place and Pryce, with worn rear tyres and brakes, couldn’t catch him.

That left Lauda to take the flag by a comfortable margin of over 20 seconds, with Pryce in sight of Depailler. Hans-Joachim Stuck and Jody Scheckter were next, while Massa recovered to claim the final point for sixth ahead of Regazzoni’s Ferrari.

Lauda left Brazil with nine points on the board after a disappointing start to the season for his chief rivals. He was only the second Formula One world champion to observe the practice of using the number one on his car and at this early stage it seemed he would keep it for 1977. Hunt, however, had made a clear impression with his immediately performance in the McLaren.

The Tyrrell drivers scored well as the team continued to use the old 007 chassis as it waited to debut its radical new six-wheeled racer at a grand prix.

But several teams had a frustrating start to the year, above all Lotus whose drivers collided with each other just ten minutes into the new season. Both drivers left the team following the race, though not for reasons to do with the crash: Andretti returned to Parnelli while March’s Max Mosley negotiated a deal for Peterson to rejoin them in place of Lella Lombardi.

The two Fittipaldi cars were still circulating at the end but had never been in contention for points. Fittipaldi himself slipped back quickly with a misfire and had to have his spark plugs changed. Ingo Hoffman came home a lapped 11th in the team’s old car.

Both of the new Brabhams were also classified. However Reutemann stopped with three laps to go as the Alfa Romeo’s thirst for fuel meant it had already emptied its 213-litre tank.

Laffite’s Ligier did not make the chequered flag. But despite the inauspicious start the team went on to enjoy a successful 20-year spell in grand prix racing.

By the time Alain Prost bought the team it had started 326 races, making Ligier the eighth-longest running outfit in F1 history. Six other teams which went on to start more races were on the grid then. But while half of those are still with us – Ferrari, McLaren and Williams – the other half – Lotus, Tyrrell and Brabham – have gone.