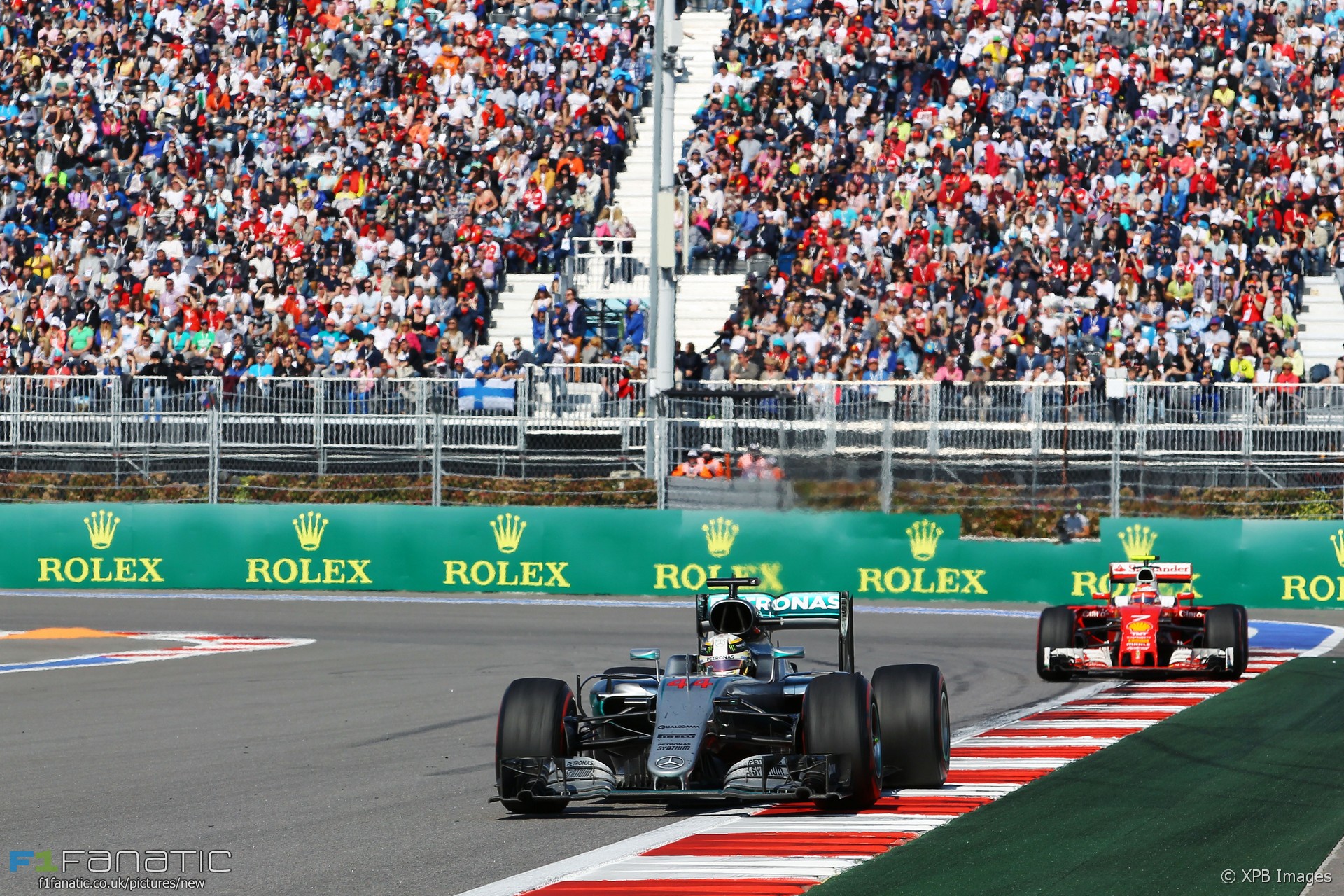 Mercedes has published an open letter to F1 fans in response to the conspiracy theories circulated following Lewis Hamilton’s technical problems during the last two races.

Hamilton defended his team following the race, stating a swap of team members between his side of the garage and team mate Nico Rosberg’s was not related to the problems he had experienced.

“There is no ‘A’ or ‘B’ team here,” Mercedes assured its followers. “Every single member of the crew has earned their right to be counted among the elite of their trade – and have sacrificed much to do so.”

Addressing “the haters, the naysayers, the conspirators” the team declared, “if we can convince even half of you of what we really stand for, we’ll consider that a battle well won”.

Here is the team’s open letter in full.

Mercedes: A Letter to the Fans

We returned from Russia on Monday with mixed emotions. On the one side, filled with pride at another one-two finish – a rare achievement in the ultra-competitive world of Formula One and something to be savoured but never taken lightly. On the other, pained by a stressful weekend – both behind the wheel, on the pit wall, in the garage, back at the factories and for all of you watching at home.

We have seen a lot of frustration aired online after the mechanical issues experienced in Sochi. We share those same emotions – but for us, it goes far beyond frustration. For those watching at home, a Grand Prix weekend starts on a Thursday morning and ends on Sunday night. A bad result might hurt for a few hours afterwards – but then life moves on. For more than one thousand people at Brackley and Brixworth, however, this is our life. These men and women pour their blood, sweat and tears into racing, day in, day out – often working around the clock and spending weeks at a time away from loved ones. They do so through passion for their work, loyalty to their team-mates and a desire to be the best.

The success we have enjoyed in recent times has not come about by accident. To paraphrase Mr Toto Wolff, we have worked our a**es off to get where we are today – and we have done so as a team. The faces you see at the track are only the tip of the iceberg – but they are a perfect example of just what this represents. They don’t just perform pit-stops together. They travel, share rooms, eat meals, construct garages, build cars, re-build broken cars, kit spares and pack down tonnes of freight – together. They sweat, strain, laugh, cry, shout, scream, celebrate, and commiserate – together. And, as one of our own often says, they win and lose – together. We have the best guys and girls in the world, doing an awesome job, week in and week out – and they do it for the team. Not for one driver or the other – but for each other. There is no ‘A’ or ‘B’ team here. Every single member of the crew has earned their right to be counted among the elite of their trade – and have sacrificed much to do so.

What happened in Sochi showed the world just what a team working in unison is capable of. We were baffled and gutted by the repeat MGU-H failure on Lewis’ car in qualifying. But we kept calm, gathered our thoughts and sprung into action. It took a monumental effort from a significant number of people back in the UK and in Russia to fly spare parts out to the track, fit them to the spare Power Unit by working through the night and make sure Lewis could start from P10 on Sunday without having broken parc fermé. This made Sunday all the more stressful for each of us. But, in the end, we were relieved just to get both cars to the flag.

Shortly after his pit stop, we saw some alarming behaviour from Nico’s MGU-K. We spent a number of laps reassuring him that he had a good gap over Lewis and could ease off before the FIA gave us the all-clear to tell him to switch to a setting that would control the issue. At the wheel, Nico wouldn’t have had any inkling of the stress on the pit-wall. When he put in the fastest lap on the penultimate lap of the race, he was still in that ‘safe’ setting – demonstrating just how much pace the car had last weekend.

Not long after Nico’s issue arose, we started to see the water pressure falling on Lewis’ car. At the time, he was pushing hard to catch Nico and pull away from Kimi – posting several purple lap times in the process. Again, we needed to await confirmation from the FIA of what we could tell him via the radio. After several calls asking him to take it easy, the all-clear came to let him know that he was losing water pressure. With zero – yes, zero! – water pressure remaining for the last 16 laps, the job he did to nurse the car home and still retain second place was truly remarkable. He had to keep the car as cool as possible to avoid damaging the engine whilst also keeping Kimi at a safe distance, which was no mean feat. We genuinely aren’t sure by what miracle the car limped across the line – but we’re certainly not going to complain!

Ultimately, none of this changes the fact that we have not met our own expectations in terms of reliability so far this season. Performance-wise we are right on the money – with a points haul just two shy of what we had managed by the same stage in 2015. But there is work to be done. Our goal is not simply to be fast but bulletproof too. Not just to manage problems but to understand them, fix them and ensure they are not repeated. We are working tirelessly to do just that and will continue to do so every step of the way. But there are no guarantees. This is a mechanical sport, balancing on the knife edge of performance and endurance. You have to push the boundaries and failures can happen.

And then, there’s the bigger picture. Here we sit, picking apart a weekend of various challenges – both on and off track. But look at the result. We should not simply be grateful to see both cars crossed the line but proud and humbled after a team result which quite literally could not have been stronger, thanks to the amazing efforts of the guys and girls in the factories, in the engineering offices, on the pit wall, in the garage and, of course, in the cockpit.

So, four races down, 17 to go. And, from what we’ve seen so far, it’s going to be one heck of a rollercoaster. There will be highs and lows, good day and bad days, successes and defeats. But, through all of this, we stand united as a team – just as we always have. To those who stand with us, we thank you. And to the rest – the haters, the naysayers, the conspirators… if we can convince even half of you of what we really stand for, we’ll consider that a battle well won.