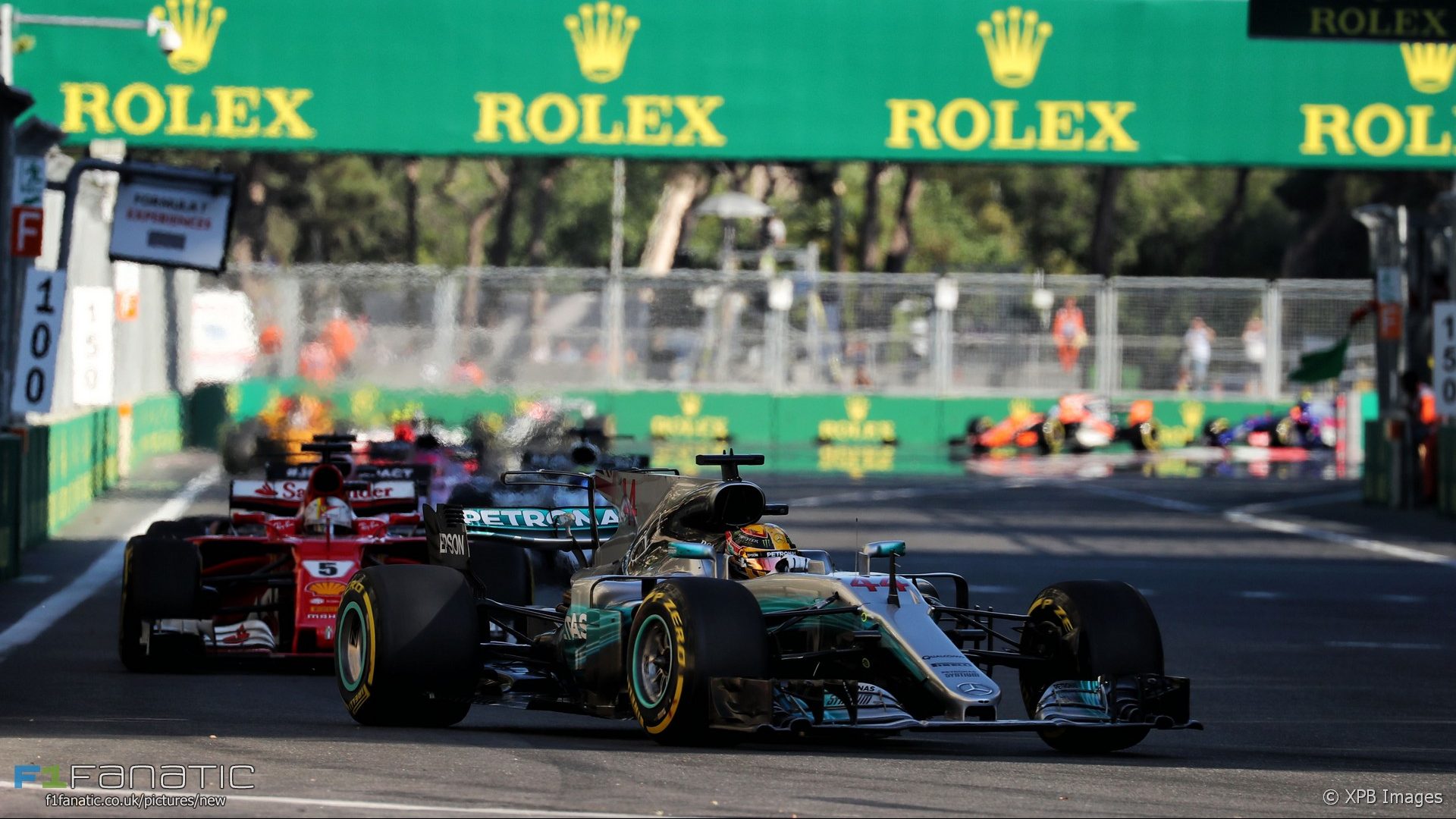 Lewis Hamilton told race director Charlie Whiting his penalty for Sebastian Vettel was too lenient after the pair collided on track in Baku.

Valtteri Bottas and Kimi Raikkonen clashed on the first lap.

Hamilton: “Everything OK with Valtteri?”
“He stopped for a nose change.”

Raikkonen: “[Censored by FOM] same guy. He hit me. I don’t know if I have a puncture.”
“OK I’m watching the pressures. Looks fine so far.”
Raikkonen: “Something doesn’t feel fine.”
“OK.”
Raikkonen: “This is… I mean he just hit me completely.”
“Understood Kimi we’re checking suspension.”

To Hamilton: “Front temps are about to enter the window.”

Verstappen: “I think I have damage from debris.”
“We think maybe you have debris in your radiator.”

Ericsson: “I have no battery.”

To Alonso: “Keep trying to cool the brakes in that sector.”

To Perez: “Raikkonen in P5 is two seconds behind Verstappen, lapping two-tenths slower than you.”

To Ricciardo: “We have a brake issue, box this lap. We need to cool the brakes. We are stopping for tyres. We want to check the brakes.”

Palmer: “Bit of smoke out of the back.”
“Scenario 12 and box. Coast into the pit entry. Careful, brake pedal might be long.”

Grosjean: “I ask you one thing, Gary. If the car becomes dangerous because of the braking, stop me. It’s going now.”
“Understood. Alright temps are getting hot so let’s try and lift and coast for a while.”

There was more frustration for Max Verstappen as his engine failed again.

To Ricciardo: “OK mate nice job. I can confirm you overtook Magnussen in a correct place. Well done.”

To Ocon: “Your tyre warm-up is really good relative to the others.”

The front-runners pointed fingers at each other after tangling during a Safety Car period.

Vettel: “He brake-tested me. What the hell is going on?”
“Understood. Focus on the restart.”
Vettel: “I have damage.”
“We will check.”

Hamilton: “Vettel literally just came alongside me and turned in and hit me.”
“Yep. Copy.”

Raikkonen was delayed by further accident damage but Ferrari were able to get him back on-track by repairing his car during a red flag period. But one crucial part of the car wasn’t quite ready in time.

Raikkonen: “Steering wheel! Someone tell him to give it to me! Come on! Move!”

Ricciardo moved up to third at the restart.

To Perez: “Sainz, Ocon and Bottas one lap ahead, all on same age tyre, super-soft.”

Hamilton was forced to pit when his headrest worked loose.

To Hamilton: “OK Lewis looks like your headrest is a bit loose at the back. See if you can pull it into position on the straight

To Ocon: “So you’re catching Alonso and Magnussen. You need to get Sainz before you catch Alonso.”

Hamilton: “If this things comes off, what’s happening?”
“OK Lewis box, box to change the headrest.”

Vettel appeared not to understand why he had been given his penalty.

Vettel: “Did you get an explanation when I did dangerous driving?”
“We speak later. Now keep your head down and mode box.”

To Perez: “Tight with Vettel, he’s serving a penalty.”

Hamilton: “A ten-second penalty is not enough for driving behaviour like that. You know that, Charlie.”

Despite his earlier delays, Ricciardo found himself on course to win.

To Ricciardo: “OK so race situation. You are leading, Stroll four seconds behind you. Then 13 seconds to Magnussen.”

“We want to swap back please. Vandoorne is coming on strong.”
Ericsson: “He cannot overtake.”
“We’ll swap back if he doesn’t pull away.”

Hamilton: “Guys if Valtteri can’t catch the man ahead, tell him to slow down a bit to cause a bad wake.”