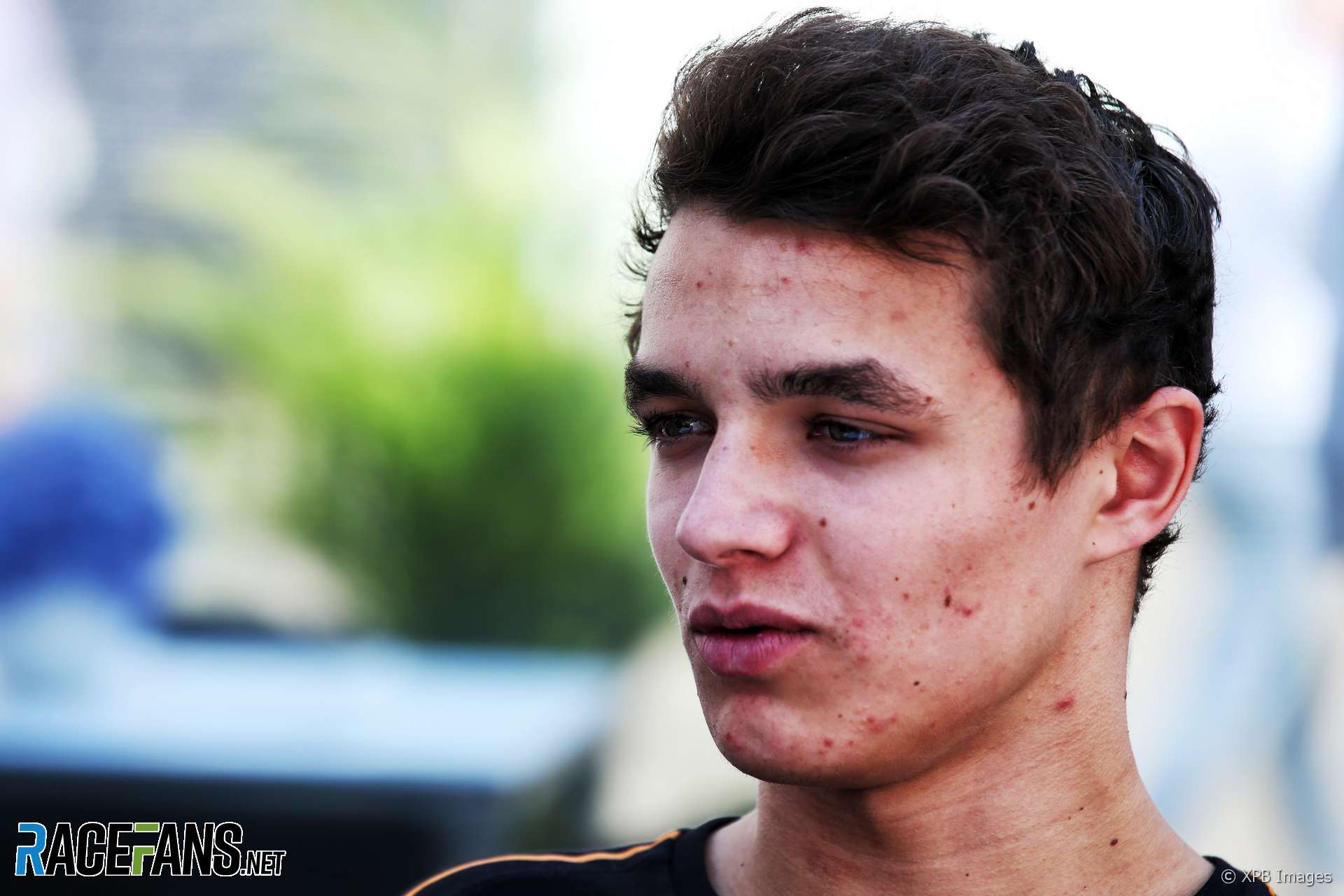 In the round-up: Lando Norris admits he ‘hasn’t done much winning this year’ as he prepared for his final race weekend in Formula Two.

Norris, who dropped out of championship contention at the previous round, hasn’t won a race since the season-opening round in Bahrain.

I’m looking forward to it – I think more than some of the others, because it’s the final race. I obviously enjoy winning a lot more than finishing second, third and so on and I haven’t done a lot of winning this year.

So I’m looking forward to it being the final race and kind of putting everything into it, trying to get at least one win in Abu Dhabi but at the same time I’m looking forward to next year even more so it kind of shadows this year. And going into the final race, knowing what I’m going to be looking forward to next year. But I still want to win and still want to do the team proud, try and get the team’s championship because I think we’re still leading that. So it’s definitely not over and I’m not going into it not caring about it. I still want to do well for myself and for the team and hopefully try and get another win, so I’ll be putting my all into it and trying to enjoy every minute.

Who's been in hot water with the stewards this year?

Here's the fully updated Penalties Index ahead of the final race of 2018:https://t.co/446U7kdrxt #F1 pic.twitter.com/SomEFoXmtC

a little treat for the fans hanging out behind the fence. thank you @sauberf1team and @tatacalde7 ! 🏎

#Macau track MUST NOT be changed. Few fine tune safety points should be done. People entering that race must respect this is one of the most difficult and challenging circuits of the world. Understand the risks and you will not be surprised. #DontChangeMacau

Heading to the airport for the final roll of the dice in 2018. Hamilton may have won the Championship, but we're excitedly rounding out the season – and looking forward to showcasing the Abu Dhabi GP in true #F1Experiences style. #F1 #ExperienceF1

Floersch: 'No fear of paralysis' for F3 driver after surgery (BBC)

"We are extremely happy that she is now recovering and that everything went extremely well. There's no fear of paralysis whatsoever."

"We are having productive conversations there and I am cautiously optimistic we can do something to surprise and delight fans in that territory and take advantage of the Max factor."

With Ghosn Gone, So Is the Glue That Held His Car Group Together (Bloomberg)

"Questions about life without Ghosn weighed on shares of Nissan and Renault, which both fell sharply after news hit of the executive’s arrest."

"I'm an optimist by nature and I'm somewhat confident that we're going to have a full stack and a full grid next year."

"I think it's safe to say that there's great enthusiasm on both sides to make this work, to make a race happen."

"Mugen will continue to field one car in Red Bull colours next season after Fukuzumi carried the Austrian firm’s famous branding this year, most likely for Macau Grand Prix winner Dan Ticktum."

"This is your chance to celebrate the double world champion at the FA Museo y Circuito (Fernando's very own circuit)."

"To drive for a manufacturer team is a dream come true and I’m very proud to be part of the history of such an important brand in Formula 1. On track, the results have been good on a whole, very consistent and that’s something I can be proud about."

Cheap, cheerful, and open to all – is this Britain's most accessible motorsport? (The Daily Telegraph)

"Tyro is cheap. You can start from scratch for comfortably less than £2,000; that is, buy and tax an eligible car, join a club and enter an event."

Formula 1 should race at tracks like Zandvoort as well as more modern venues, says Matn:

The owner is in fact also a Dutch prince and own several houses (or even complete streets) in Amsterdam, so he’s well known in real estate.

On the other hand he’s also a true race fanatic and didn’t buy into Zandvoort with a possible grand prix looming.

The circuit is old, the facilities are old and the routes to the track small and pass several small villages. Then again it known to be a very nice race track with nice historical values, the track lack’s run off areas and is nicely located in the dunes…apart from grandstands people can take place in the dunes all around the track.

It’s the opposite of tracks like Baku, Vietnam and Miami. F1 needs a bit of both.
Matn