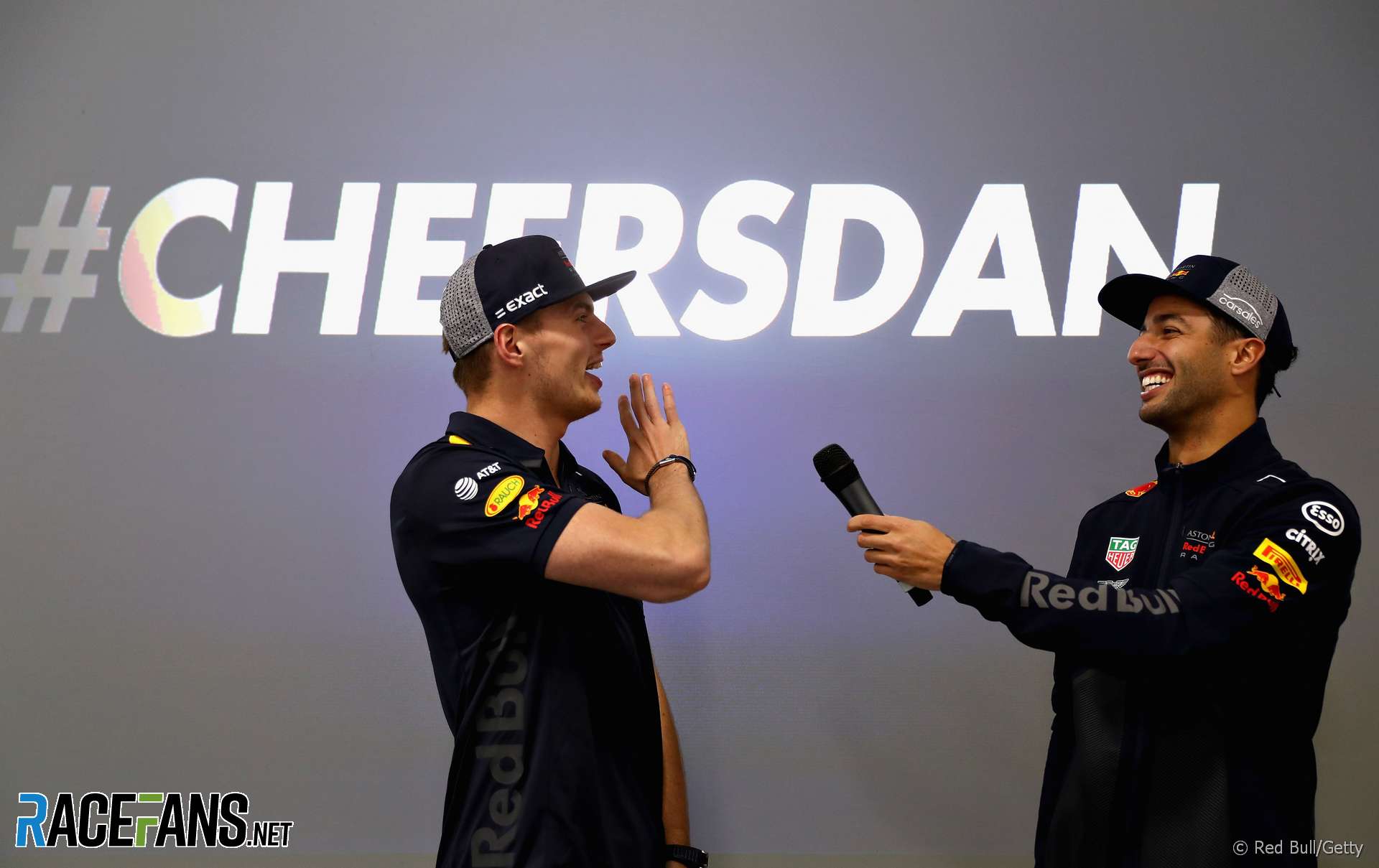 In the round-up: Max Verstappen can become one of the great Formula 1 drivers if he has a sufficiently competitive car, says his former team mate Daniel Ricciardo.

Ricciardo was Verstappen’s team mate for most of the last three seasons:

For sure there’s a lot of potential. For sure some potential greatness for Max. I think it’s all about the trajectory. He keeps improving, he was quick from day one, but I’m convinced he’s got quicker than his first win with Red Bull.

I’m sure he’ll keep improving but it’s probably going to be more of a scenario/situation in terms of if he’s going to be with a car that’s capable of winning. That’s probably what’s going to dictate what levels of greatness he’s able to achieve.

And obviously if that goes through a course where it’s not happening then you might get the frustrated version [of him]. But as far as obviously his ability and that goes, he’s obviously very talented.

I’ve enjoyed the challenge with him and the rivalry. I think we’ve both grown as drivers. It’s been beneficial to both our careers.

Charlotte, the boys and the @henryhopefrost family have asked me share the outcome of a Crown Court matter, heard today. The Court found that Henry was blameless in the accident that claimed his life. One traumatic process is now concluded. The family remains grateful for support pic.twitter.com/N1OGyJKnLC

I can imagine JW dicking around with Twitter in the beginning and setting up an auto tweet like this to see how it all worked. Every year this tweet gets sent out, no idea how long it will continue, but it always brings a smile to my face thinking of you setting this up https://t.co/B96ZiYymIg

"It’s still a work in progress to complete the leadership structure for our Formula 1 business. However, I’m excited that James will be starting in time not to influence the 2019 car on its debut, but certainly to help its progression over the course of the season, and most importantly have him be the ‘father’ of the MCL35."

"Talent, we know he has. It's going to be a good challenge for Seb."

"The Korean manufacturer confirmed that its customer racing manager, Andrea Adamo, will step up to the position of team director and will be responsible for the running of its WRC programme with immediate effect."

Could Formula 1 and Formula E merge in the future? Neil says it won’t be any time soon.

At the moment, an F1/FE merged would be like merging the Renault Clio Cup with NASCAR. ‘They both have four wheels and a roof, so hey, why not?’

Much as Formula E likes to talk itself up, it currently occupies a small niche in the motorsport world and survives largely on marketing. The tracks are a joke, the cars look slow even on enclosed circuits, the technology has lost its ‘wow factor’ and the quality of the racing isn’t particularly good. I like that it races in cities, but it can only do that because the cars are so slow. The only two things it really has going for it are manufacturer involvement (though reliance on manufacturers isn’t necessarily a good thing) and a high-quality driver field.

In the future? Maybe a merger could happen, but FE would probably need to give up its unique selling point (electric cars in big cities) to become relevant enough to be an ‘equal partner’ in a merger. It’d need to evolve into a (popular) series with quick electric cars, and that means they’d have to ditch the crap little Mickey Mouse tracks and use real circuits. Quicker will most likely mean more expensive, advanced technology, and leaving cities will mean they have to be able to attract fans out to real tracks to watch the racing.

Only, I get the feeling that by the time (if it ever comes – doubtful) they get to the point of being able to do that, someone else will already be doing the Silent 24 Hours of Le Mans and FE won’t have a niche to evolve into.

But we’re all crap at predicting the future, so perhaps I’ll be paying SkyLiberDisney £500 a month in 2035 to watch the first Formula On-E world championship…
Neil (@Neilosjames)