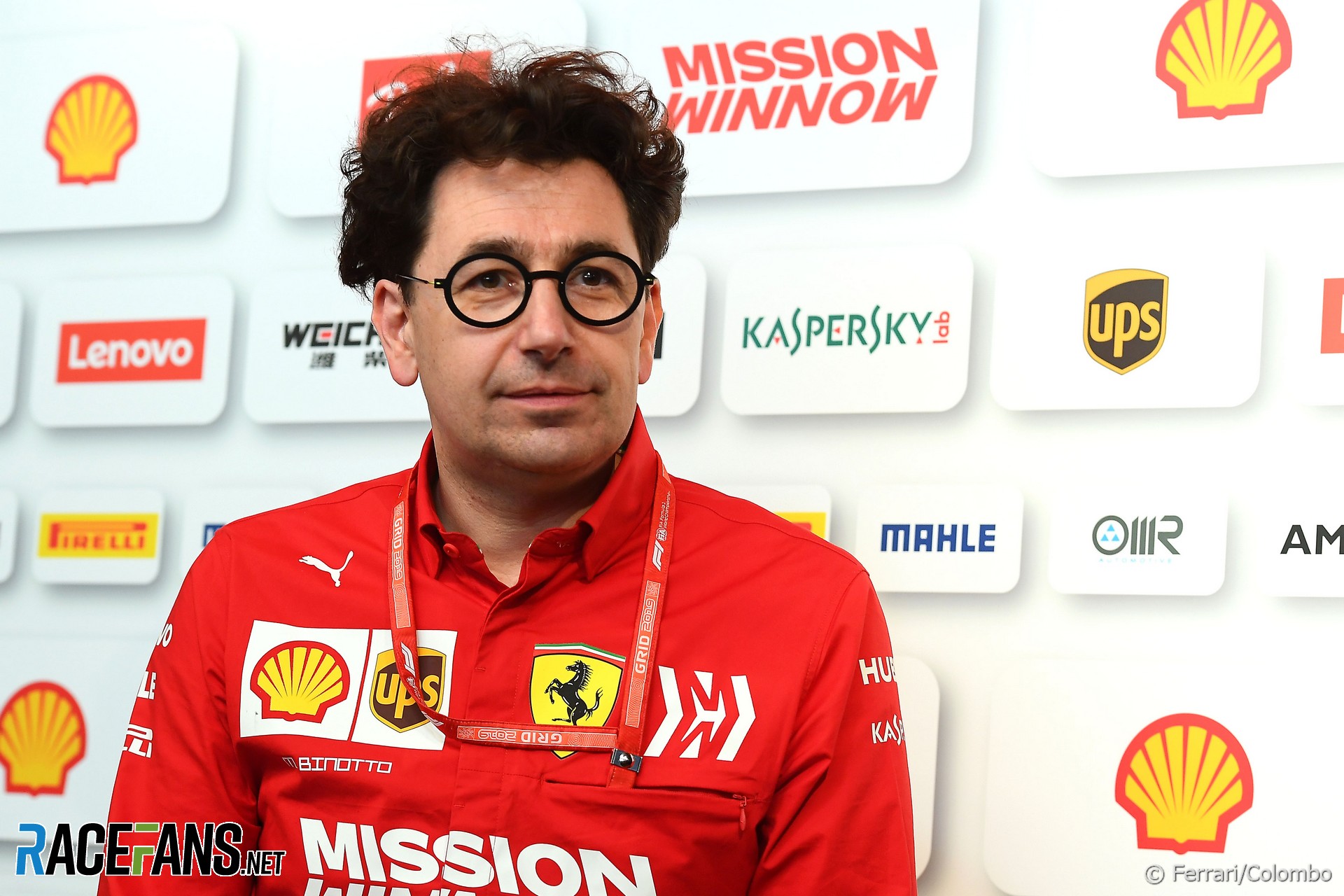 Following Charles Leclerc’s shock elimination in the first round of qualifying, Ferrari held a special press conference to explain what went wrong. It’s a further sign of a change in attitude from the team which refused to let the media speak to its top staff last year.

Up and about after returning to apartment at midnight (ish) after a fun-filled Friday evening dinner hosted for selected media by Rodrigo Sanchez, head of marketing for the Mexican Grand Prix. Obviously the matter of the national government’s refusal to continue funding the race after this year comes up, but Rodrigo has no concrete news.

However, I hear elsewhere that the chances of a Mexican round on the 2020 F1 calendar are 50-50 at best, despite their having a major advantage over other expiring races: Liberty needs another event in North America to offset travel costs to Austin. What is clear, though, is that regardless of which races remain, with Zandvoort and Hanoi arriving Liberty faces plenty of calendar juggling. A source indicates the 2020 season will kick off in Melbourne on March 15th, a similar slot to this year.

Back to this weekend: Apart from the support races (F2 provides its usual entertainment), Monaco Fridays are now a waste of time, with little in the way of media activity. I’d previously scheduled a full-length interview with Dr. Luke Bennett, who oversees the welfare of many drivers and kindly assisted with our ‘jetlag’ feature, but once that’s done it’s a matter of snooping about the paddock – which is how I learned the FIA had cancelled the gearbox tender. 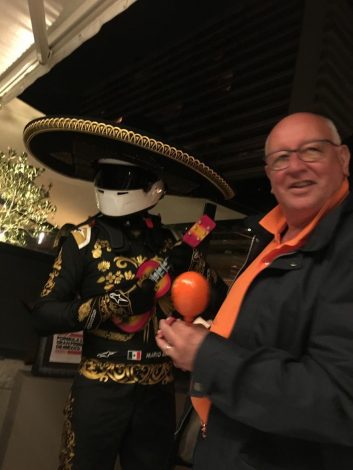 I’d also picked up that F2 feature race winner Nyck de Vries had signed as Mercedes simulator driver – something not even one of his team colleagues was aware of for some reason – and that the team would run red halos in Sunday’s race in memory of the much-missed Niki Lauda.

About the only other topic worth mentioning is that yet another source is adamant Toto Wolff is still in discussions with Liberty about a future CEO role. But for the rest it’s a matter of waiting about for the Mexican GP dinner.

Over rump steak with mushroom sauce, followed by a rich chocolate cake, we enjoy an evening of laughter. Rodrigo pulling a Mexican party trick – a shock generator, which ‘bites’ more than a few guests. Our host had also imported ‘Mario Achi’, which looks like what would happen if Top Gear’s The Stig turned up at the ‘Day of the Dead’ festival which annually coincides with their grand prix. A fun-filled evening – thanks to Rodrigo – even if a late-ish night. 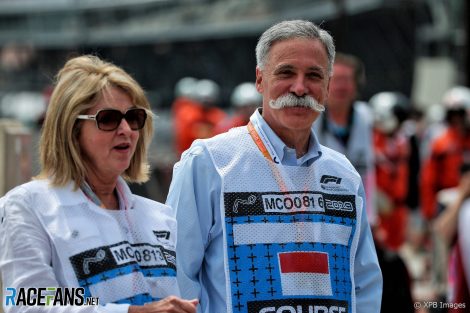 Depart for circuit after breakfast, a quick and easy drive with little in the way of traffic. However, the parking garage shows ‘Full’ despite being allegedly reserved for F1 personnel, and I’m forced to wait until a car has exited before the barrier lifts. This had never occurred in my over 20 visits to this grand prix, and I’m later told 1,000 passes were issued for a 700-place garage.

What with Paddock Club punters now going trackside – tellingly the number of media tabards has been simultaneously reduced – it seems parking spots elsewhere are being commandeered for high rollers, putting the squeeze on F1 personnel.

Enjoy an interesting chat with Anthony Davidson about driver ageing, then receive a message that Glyn Hall and Giniel de Villiers, team boss of Toyota Gazoo’s Dakar operation and former Dakar winner respectively – both of whom I know from South Africa – are in Monaco as guests of Red Bull, so head for the floating Energy Station for a catch up. Great to see them both again. 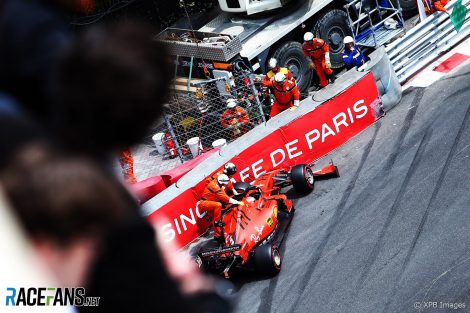 Final practice, where things start to go wrong for Ferrari. Sebastian Vettel puts it in the wall at Sainte Devote and his team mate Charles Leclerc almost cops a penalty for speeding in the subsequent Virtual Safety Car period.

Roaming the paddock afterwards, I obtain more details on Liberty’s post-2020 plans. It seems Ferrari will retain both its veto and bonuses, albeit if slightly reduced fiscally, with the ‘logic’ being that cost caps will be imposed to prevent the income being used for performance purposes. Of course, that depends on the level of cap, which still remains unclear.

I stop off at Pirelli for pre-qualifying lunch: As always the dishes are superb, in my instance a salad starter followed by herbed roast rack of lamb, with the chef’s signature tiramisu rounding off a wonderfully tasty meal. 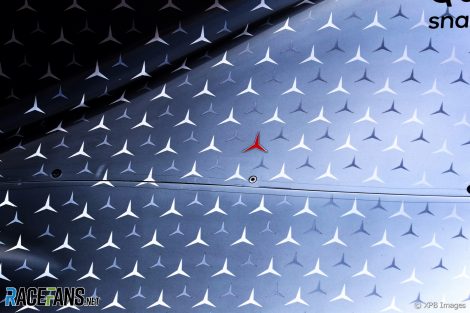 The chequered flag falls on a lively qualifying session. Lauda would no doubt approve of his former team Mercedes’ sweep of the front row, and have something forthright to say about his former team Ferrari’s failure to have Leclerc on time to ensure he isn’t knocked out in Q1.

Due to the logistics of Monaco and the inevitable stewards’ enquiries, the interview sessions are somewhat jumbled. Ferrari add an extra briefing so team principal Mattia Binotto can give a mea culpa over the qualifying farrago. What with Zak Brown on Friday grabbing his sword in public after the team’s Indy failure, and Binotto personally explaining the Scuderia’s qualifying mess, it’s been quite a weekend for team boss confessions.

McLaren’s media session proves enlightening, particularly as it marks technical director James Key’s first official appearance, and it will be interesting to see how he goes about restoring the team’s technical respectability. Ditto David Robson at Williams, whom I had not met before.

Meanwhile at Mercedes Toto Wolff tells the assembled throng that the red star the team has added to its W10 this weekend in memory of Niki Lauda will remain there “forever”. Another mark of the late champion’s contribution to the team’s continued success.

Interviews done, it’s time for dinner – ham and cheese baguettes are kindly provided by the media centre – before packing up and heading for the apartment in Menton.

Although the circuit roads are now open, the disruption is such that the journey takes well over an hour. Then it’s time to pack up ahead of check-out on the occasion of Monaco’s 90th anniversary grand prix.