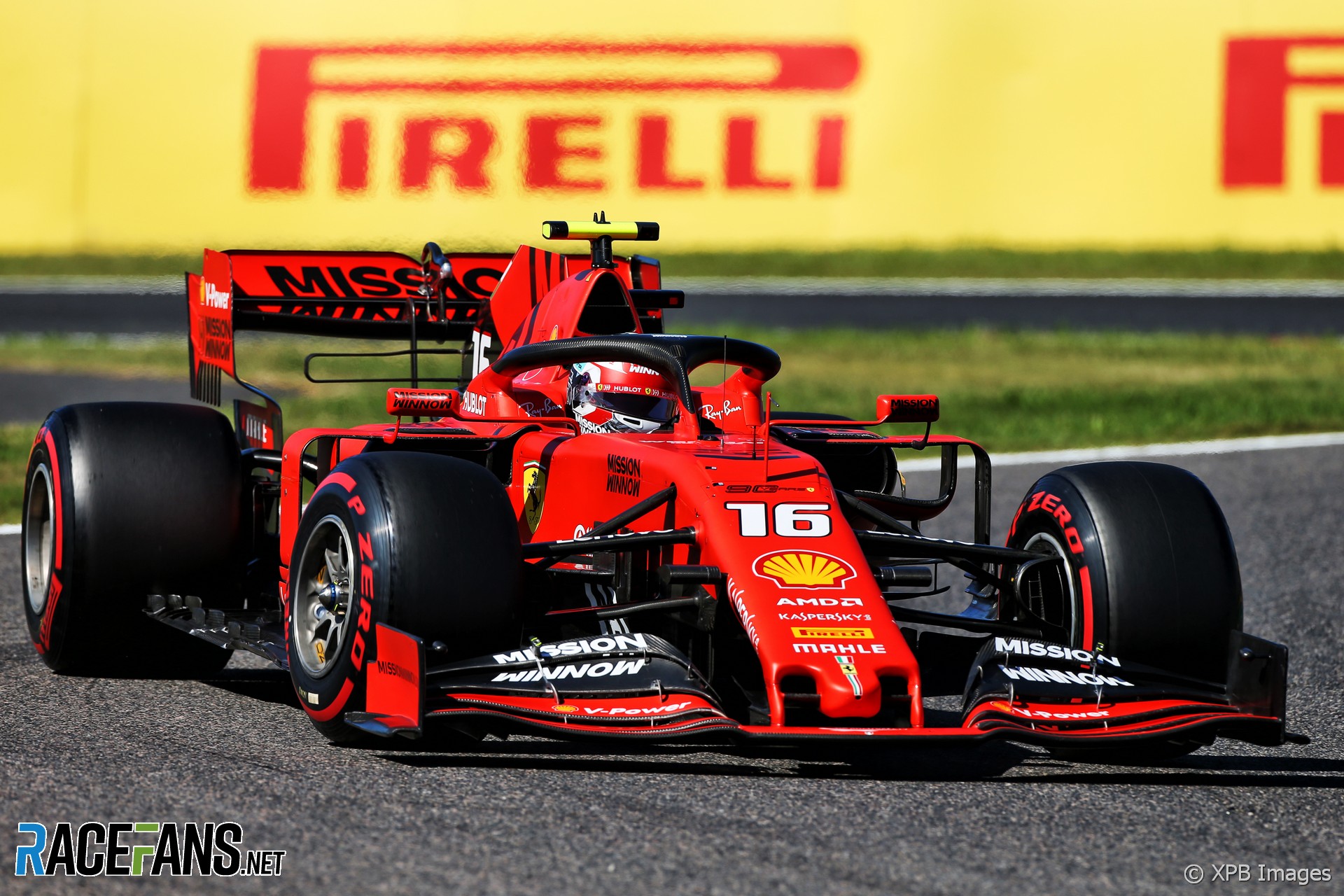 Charles Leclerc has been given two time penalties following his collision with Max Verstappen in the Japanese Grand Prix.

The penalty drops Leclerc, who originally finished sixth, to seventh place and promotes Daniel Ricciardo one place to sixth.

The stewards originally decided the collision between Verstappen and Leclerc did not need to be investigated. However after looking into it they judged Leclerc was at fault, and in addition to his time penalty handed him the first two penalty points on his licence.

“Car 16 and car 33 were side by side as they transited [sic] turn one and approached turn on the first lap, with car 16 on the inside,” the stewards noted. “As the cars approached the apex of turn 2, car 33, which was marginally in front, stayed wide and allowed sufficient room to the inside but car 16 lost front grip in the wake of the car in front and abruptly understeered towards the outside of the track, contacting car 33 and forcing it off the track.

“While the loss of front grip on car 16 caused the contact and was not intentional, that loss of grip in close proximity to the car in front should have been anticipated and allowed for by car 16. Car 16 is judged predominantly at fault for the incident. This is a somewhat unusual first lap incident, as only these cars were directly involved, so few of the normal mitigating circumstances exist.”

The stewards also criticised Ferrari for telling Leclerc to stay out on the track with a damaged car. Part of Leclerc’s broken front wing hit Hamilton’s car, which the stewards said “only narrowly avoided being a major incident”. Ferrari were fined €25,000 in addition to Leclerc’s time penalty.

“Car 16 received front wing damage in an incident on lap 1 at turn 2,” the stewards noted. “The car continued on after the incident and did not pit at the end of lap 1.

“During lap 2, anticipating a call about the car, the team told the Race Director they were calling the car into the pits at the end of lap 2. During lap 2, at turn 11 one section of the front wing detached from the car. Later on that lap, after turn 14 a larger section of front wing detached from car 16 and impacted car 44 which was closely following car 16. This piece of wing narrowly avoided an impact in the area of the cockpit of car 44 and destroyed the right-side mirror of car 44.

“After this second piece detached, the team felt the car was now in a safe condition and despite previously telling the Race Director that the car would be called to the pits, they told car 16 to remain out and not to pit. On lap 3 the Race Director called the team and directed the car be brought to the pits for inspection. Car 16 pitted at the end of lap 3.

“By not bringing car 16 into the pits at the end of lap 1, immediately after the incident for a safety inspection when there was damage clearly visible and then by telling the driver to remain out for an additional lap after telling the Race Director otherwise, the team created an unsafe condition on the circuit which only narrowly avoided being a major incident and also increased the likelihood of additional incidents after the one noted.”