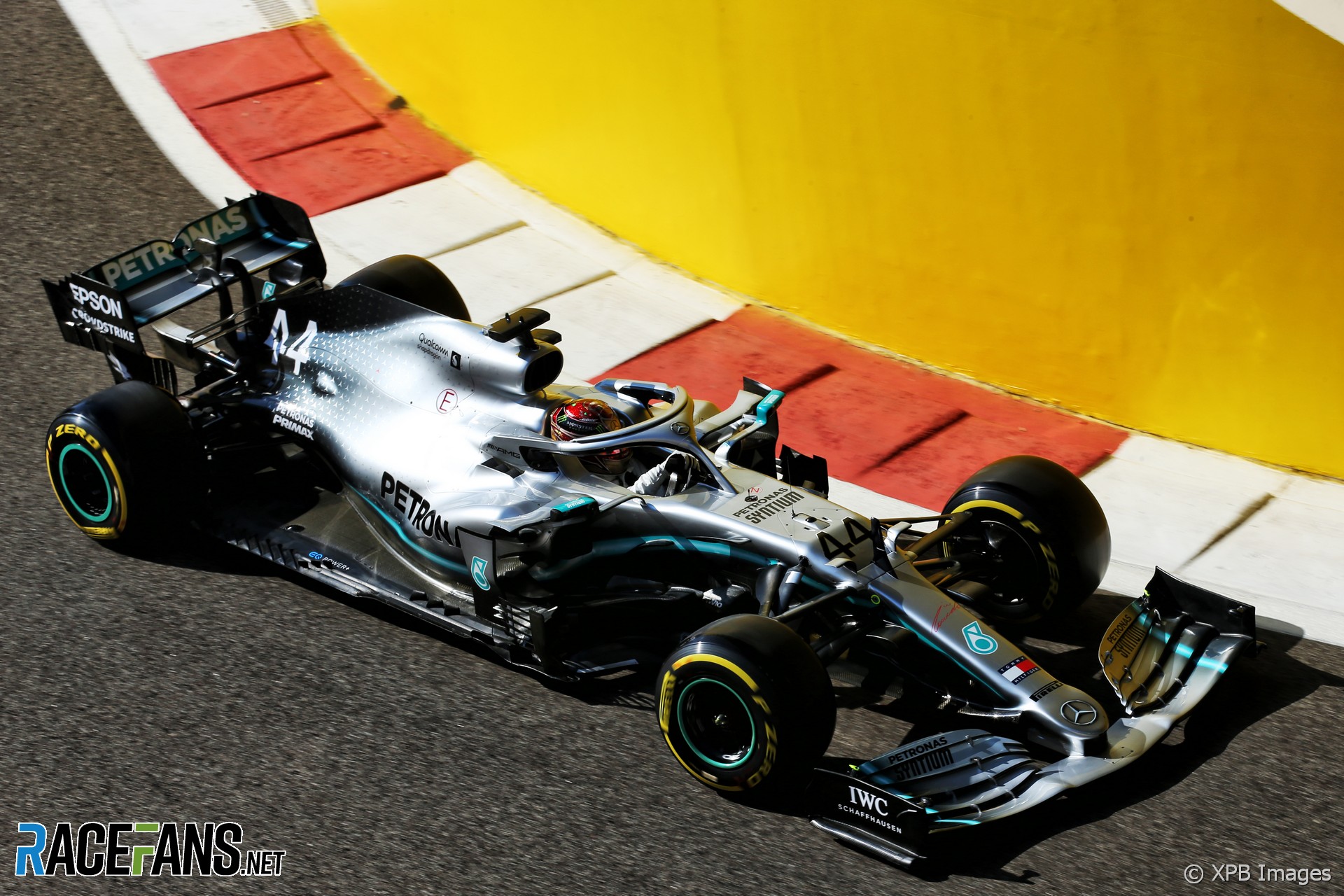 Lewis Hamilton will start the final F1 race of 2019 from pole position.

However Mercedes have been denied a sweep of the front row as Valtteri Bottas, who qualified second, will be relegated to the back of the grid by his engine change penalty. Max Verstappen, who qualified third, will start alongside Hamilton.

The session didn’t go well for Ferrari. Charles Leclerc was unable to complete his final lap after being held up behind team mate Sebastian Vettel.

Lewis Hamilton led the way in Q1 though a late improvement by Alexander Albon propelled the Red Bull driver up into second place, two-tenths of a second off the pace setter. Their team mates came next, followed by Charles Leclerc.

The Racing point pair found good pace from their car. Sergio Perez took advantage of a spin by Sebastian Vettel to beat the Ferrari driver to sixth. Vettel lost his car at the exit of the final corner, and briefly ran backwards along the start/finish straight before rejoining. Lance Stroll needed a strong last lap to escape the drop zone and delivered it, moving up to 12th, albeit over half a second off his team mate.

Stroll’s final effort pushed a dejected Romain Grosjean into elimination. Already forced into an overnight set-up change following his collision with Valtteri Bottas yesterday, he was held up on his way out of the pits when Daniil Kvyat was waved out in front of him. Thestewards are investigating the incident.

The other four eliminations were in line with the performance seen in practice. Antonio Giovinazzi out-qualified Alfa Romeo team mate Kimi Raikkonen, while George Russell completed a clean sweep of qualifying victories against Robert Kubica.

[icon2019autocoursempu]Perez came close to reaching Q3, but fell short by a tenth of a second. Behind him the gaps were close – his team mate and both Toro Rossos were within a tenth of a second of him – but none could stop the four Renault-powered midfield cars advancing to Q3.

Inevitably the McLaren and Renault drivers had to use the soft compound tyres to do it. With most of the other drivers getting through on mediums, that could put them at a disadvantage for the race.

The Mercedes pair easily got through on the harder rubber. The Ferrari drivers took a different approach – both set times on softs initially, but Leclerc chose mediums for his final run and improved, heading the times overall. Albon, who earlier in the session had complained that he always has to leave the pits first, missing out on the benefit of a tow, went the other way, switching from mediums to softs for his last effort.

A tidy first effort by Hamilton gave him a comfortably three-tenths margin over his rivals. He was especially impressive in the final sector – a part of the track where he has usually been strong – where even Verstappen couldn’t get within two-tenth of a second of him.

The Red Bull driver was second after their first runs, followed by Bottas and the Ferraris. The red cars flew down the long straights in the first two sectors, but Charles Leclerc was dismayed to lose six-tenths of a second to Hamilton in the final third of the lap.

“Am I doing anything wrong in the last sector?” he asked on the radio, “Is Seb also losing this amount of lap time?” The team pointed out he had been a tenth faster than the other car on the first run.

It all went wrong for Leclerc on the final run. With cars backing off in front of him – the closest of which was Vettel – he wasn’t able to begin his last lap before the chequered flag fell. “We’re not going to make it, Seb is slowing down” he warned them shortly before reaching the start/finish line where the lights had turned red.

Fortunately for Leclerc, neither Vettel nor Albon improved sufficiently to demote him far. The final runs changed little: Verstappen lost second to Bottas, but will take it back when his rival is relegated to the back of the grid.

That left Hamilton sitting pretty, set to start the season finale from the front, and ending a 10-race streak without a pole position.