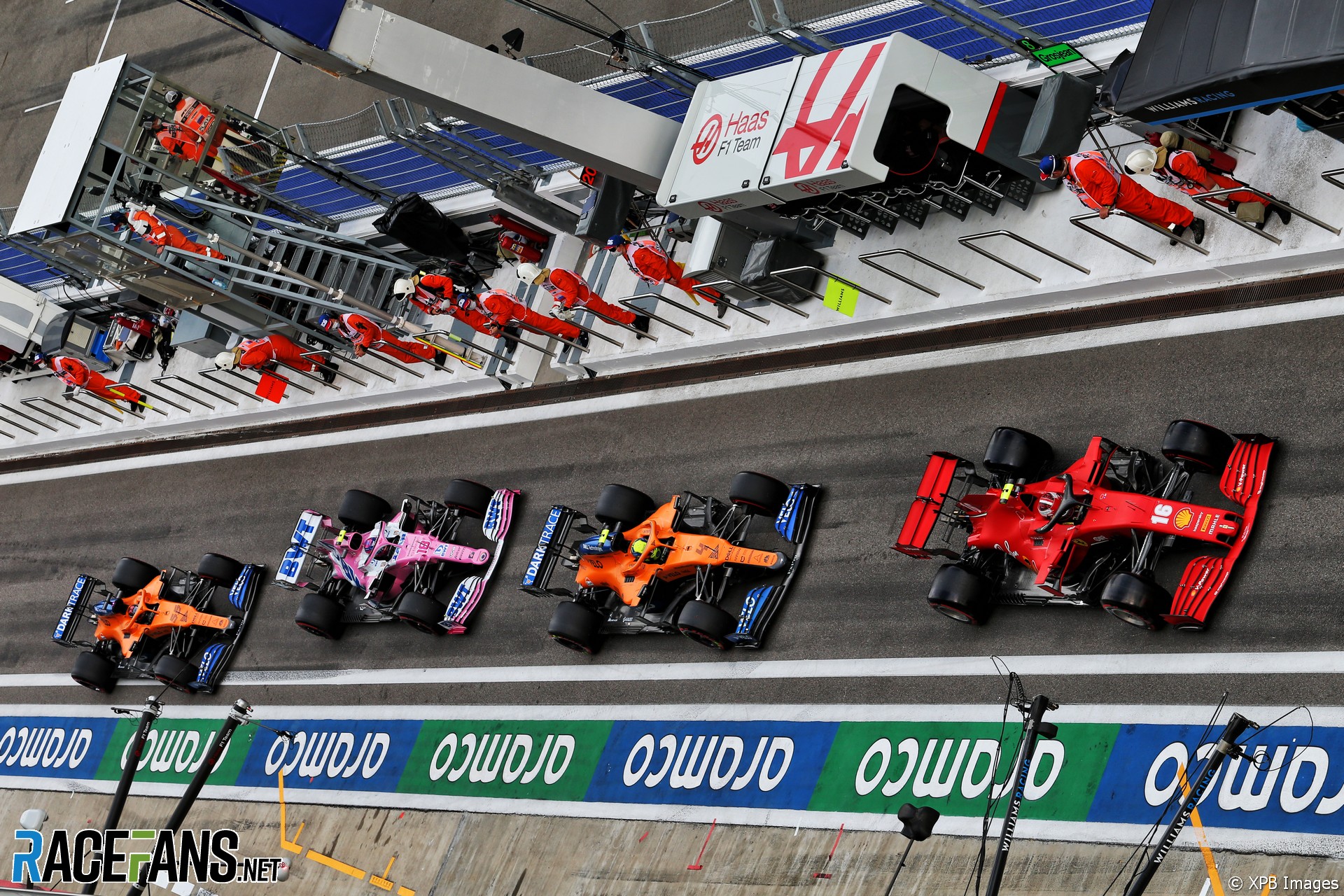 But there is one respect in which their engine is not quite a match for their rivals’. It rarely has a bearing on the competition, but it did in qualifying for the Russian Grand Prix today. And it could have crucial implications for tomorrow’s race.

Lewis Hamilton found himself on the back foot in Q2 when his first lap time was deleted because he ran wide at turn 18. This was a costly setback, as he had to come into the pits before making another attempt at reaching Q3. “We couldn’t do another lap because we didn’t have the fuel,” explained team principal Toto Wolff.

Hamilton returned to the track to make his second attempt with another set of medium compound tyres fitted. Drivers who reach Q3 must start the race on the tyres they use in Q2, and Hamilton wanted to qualify on medium compound instead of the soft, which would degrade quickly at the start.

However his second Q2 run was scuppered when Sebastian Vettel crashed at turn four. Hamilton was in the penultimate corner of his lap when the session was red-flagged.

The clock froze with two minutes and 15 seconds remaining. As a lap of Sochi takes just over a minute and a half, this left sufficient time for some drivers to complete out-laps and begin timed laps once the session was restarted. However it was doubtful all 14 remaining cars could do so in the narrow window available.

In order to maximise their chances of setting a time, drivers needed to be the first in line at the pit lane exit. But with many drivers hoping to do the same, that would mean waiting for a long time with the engine running, which creates a risk of overheating.

For teams with Renault, Honda or Ferrari power units, this isn’t a problem. They can pull up, stop their engines and restart them when needed using the electrical power from the MGU-K – as Charles Leclerc did when his car stopped during the Spanish Grand Prix.

The Mercedes power unit, however, doesn’t have this capability. “We couldn’t really send him out early because you need to switch off the car and then restart it on the MGU-K, which is something we can’t do,” Wolff confirmed.

Had Mercedes been able to send Hamilton out early and have him lead the cars out of the pits, they would have known he could drive a hard enough out-lap to bring the medium tyres up to the required temperature. But because they knew he’d be stuck at the back of the queue with a compromised out-lap, they had to put him on the soft tyres, which would warm up more quickly.

Many of the non-Mercedes runners headed for the pit exit long before they knew when the session would restart. Alexander Albon led the queue, followed by Max Verstappen, Pierre Gasly, Daniil Kvyat, Leclerc and Lando Norris.

The only Mercedes-powered driver in the queue initially was Lance Stroll, who like Hamilton was in the ‘drop zone’. However his car had to be pushed away before the session restarted. “We had an overheating issue with the engine,” he admitted afterwards.

Mercedes knew they couldn’t take that risk with Hamilton, and sent him out shortly before the session restarted, on a set of softs.

“We felt that if he was at the back of the train and could not do the the out-lap that he would need to do, we could be caught out because the medium is simply not there yet,” Wolff confirmed. “That’s why we put him on the soft.”

Verstappen and Valtteri Bottas, Hamilton’s closed rivals on the grid, will both start on the medium tyres. “[This] is clearly compromising him for the strategy tomorrow,” Wolff admitted, “but it was the necessary safeguard today to be sure that he would make it into Q3.”

On most days Mercedes’ rivals would no doubt happily trade their MGU-K restart capability for a little more power or efficiency. But on this occasion, this difference between the power units proved significant. It remains to be seen whether it has left Hamilton at a disadvantage which will compromise his race.