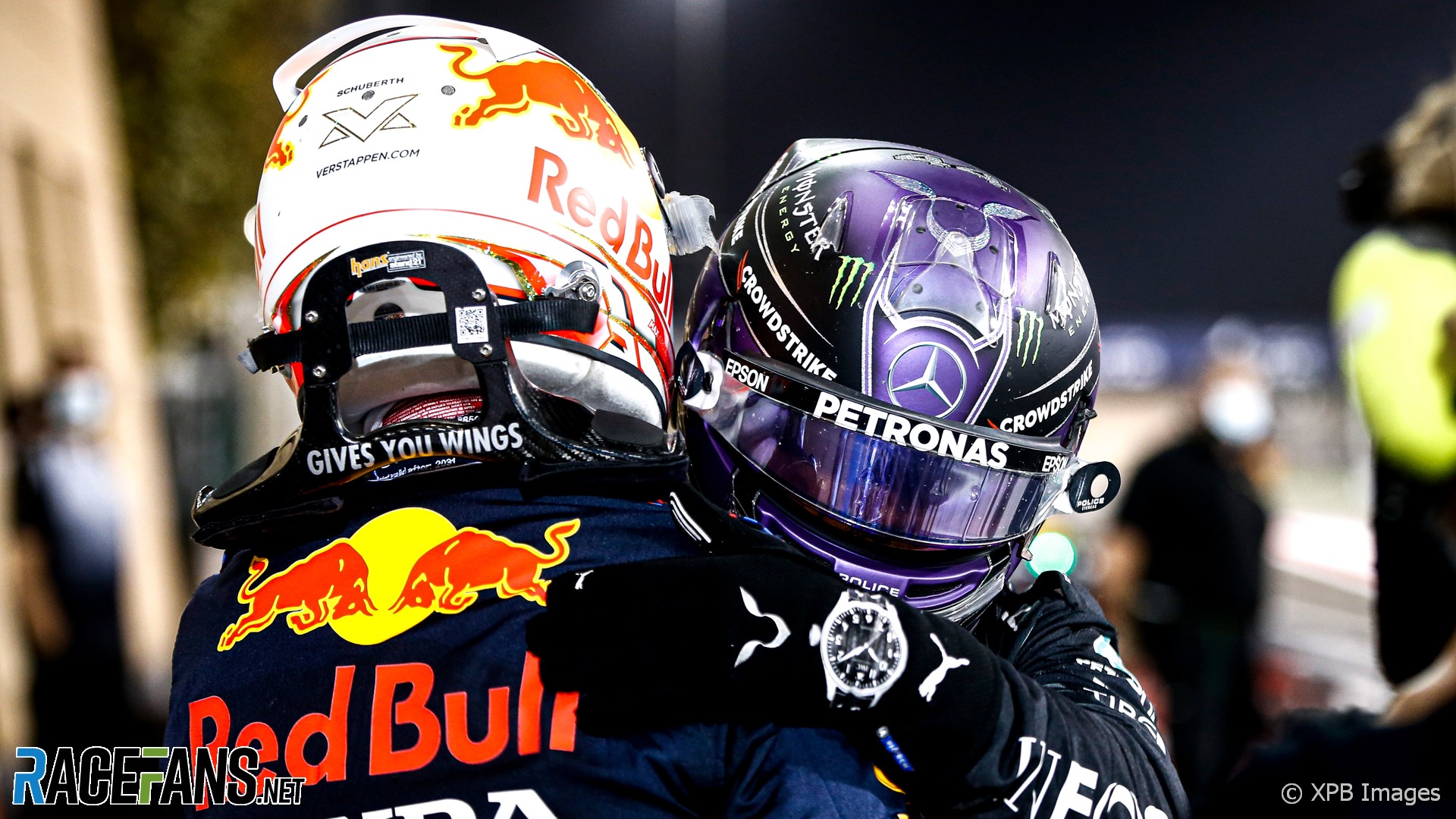 Many of the greatest moments in Formula 1 history involve world championship fights which were decided at the final race of the season.

The dramas left indelible memories in minds of those who witnessed them: James Hunt denying Niki Lauda the title at a rain-lashed Fuji in 1976, Nigel Mansell’s tyre explosion handing the 1986 crown to Alain Prost at Adelaide, or Michael Schumacher’s controversial championship-winning collision with Damon Hill at the same track eight years later.

But F1 has added little to this history in the past decade. It’s been five years since Formula 1 had a final-round title-deciding race. You have to go back almost a decade for the last time two drivers from different teams were still in contention at the end of the season.

That may finally be about to change. The 2021 F1 season opened with a finely-poised contest between Mercedes and Red Bull.

This isn’t the first time in the V6 hybrid turbo era Mercedes have faced competition at the start of a season. Ferrari won the opening rounds of the 2017 and 2018 campaigns – indeed, it took Mercedes four races to score a win in the latter campaign. Nonetheless on both occasions Lewis Hamilton bagged the title with several races left to run.

Do Max Verstappen and Red Bull have it in them to stay in the fight until the end – and finally wrest the crown which has been Mercedes for the past season years?

How far ahead are Red Bull?

Testing indicated it was the case and qualifying in Bahrain gave the first proof: Red Bull are now the team to beat on one-lap pace. Having been four-tenths of a second slower than Mercedes around the track in November, they were quicker by almost as much at the first race of the new season.

“Bahrain was always not the strongest race for Red Bull, and also they haven’t been particularly good out of the blocks, and this weekend shows that all that is not the case anymore in 2021,” Mercedes team principal Toto Wolff reflected. “So I have no doubt that they are extremely difficult to beat.”

This is just one data point, of course. Mercedes had been more competitive in Q2. “On the medium tyre, Mercedes have been very strong all weekend,” said Red Bull team principal Christian Horner in Bahrain. “They were quicker than us in Q2 on that medium tyre.”

“The great thing for Formula 1 is it looks like the two teams are close,” he added. It certainly seemed the two teams were closer in the race, where they used medium and hard compound tyres rather than the softs.

Hamilton was able to stay close enough to Verstappen in the opening stages that he could make an early first pit stop, claim track position, and run a long final stint to snatch victory from under Red Bull’s noses.

What was behind the change in performance? Verstappen revealed after the race he “had more wheel-slip on one side, on the rear”. This appears to have been related to a problem with his differential, which Red Bull motorsport consultant Helmut Marko estimated cost them around three tenths of a second per lap.

Some of Red Bull’s performance gain has clearly come from its engine as well. However Marko revealed Verstappen’s unit was turned down slightly in the race due to concerns over rising temperatures.

Hamilton also had a trick up his sleeve. Drivers were told before the race they were free to use the run-off area at turn four and he did so more aggressively than most. Verstappen spotted this during the race, and Red Bull advised him to do the same. Horner’s later claim that there’s “a two-tenth advantage using that part of the circuit” may be slightly exaggerated, but of course Hamilton wouldn’t have done it had there been nothing to gain.

Even with these caveats, Verstappen was still able to catch and pass Hamilton, though the move didn’t stick. The evidence is clear Red Bull have started the season with a solid performance advantage of multiple tenths of a second over Mercedes. It remains to be seen whether this will be replicated at circuits which are not as abrasive or hot as Bahrain typically is.

Will Mercedes close the gap?

Knowing what it took to deny Verstappen victory in Bahrain, Hamilton made it clear he expects a tough fight over the rest of the year. “I don’t recall how close the other seasons were exactly but this has got to have started off as one of the toughest,” he said.

“Red Bull’s pace is incredibly strong, as you could see. We can’t match them in qualifying right now. That’s a big, big step for us. I thought we could get closer within the race but that was a little bit too close for my liking.

The usual development war has a different complexion this year. New technical regulations coming for the 2022 F1 season mean that, power units aside, any time spent working on this year’s car will have no application for next year. Mercedes and Red Bull’s rivals will be thinking much more about next year than this one.

On top of that, F1’s new aerodynamic development handicap rules – based on last year’s constructors championship result – allow Red Bull to conduct more wind tunnel and CFD runs this year than Mercedes (and their eight rivals can do even more). The trade-off between 2021 and 2022 is therefore hardest for the world champions.

The off-season changes to several areas of the rear floor lie at the root of Mercedes’ aerodynamic problems. The full impact of this will likely have been diagnosed at the beginning of testing, and whatever solutions they have produced are likely to appear in the coming races. As Wolff acknowledged in Bahrain, they are fortunate that the opening rounds of the championship are far more spread out than last year.

More than half of the 23 races on this year’s longest-ever calendar take place in an intense burst of activity after the summer break, which includes a trio of triple-headers. Development at that point is likely to be very limited, and we’ll have a good idea then how close the title fight is likely to end up.

Who’s got the edge on reliability?

This is a significant question mark. Reliability problems can do huge damage to a championship fight, especially when their impact is amplified by grid penalties.

Recall how Bottas ended the 2019 season, after the championship fight had been settled: A power unit failure put him out in Brazil, and the subsequent penalty meant he started the next race from the back of the grid. For a title contender, such a blow of potentially more than 25 points can easily prove decisive.

There were worrying problems for the Honda-powered teams in Bahrain. Both Sergio Perez and Pierre Gasly had to take new electronics and batteries after the manufacturer spotted worrying signs in the data. Perez’s car then stopped on the formation lap but, encouragingly, was coaxed back into life and took him to fifth place.

Honda has made a major development push during the winter, and at one stage accelerated its efforts to bring forward innovations it intended to introduce next year. Could they have pushed the envelope too far? We’ll find out as the first engines near the end of the eight (not necessarily consecutive) events they must complete.

Will the team mates get involved?

Hamilton and Verstappen have been their teams’ top scorers of recent seasons, led the way in Bahrain, are best-placed to lead the championship charge for their respective outfits. But what roles will their team mates play?

Verstappen’s team mates have troubled him little in recent seasons. He has only been out-qualified once since the start of 2019. Perez, his fourth team mate in as many years, didn’t make the cut for Q3 in Bahrain and hasn’t always been the strongest on one-lap pace, so it would be a surprise if he starts regularly out-qualifying the other Red Bull and threatening to take points off him.

Bottas, however, has shown he can beat Hamilton on single-lap pace from time to time. Given Mercedes lap time disadvantage to Red Bull, Hamilton can ill-afford to let that happen at the moment. It’s doubtful he would have got in position to win in Bahrain if he’d had to spend the first few laps picking his way past Bottas.

Perez’s predecessors were too rarely a threat to Mercedes’ drivers. As he settles into the team – a process he suggests will take around five races – Red Bull will expect him to start out-qualifying the Mercedes drivers and further limit their points-scoring.

There is also the question of if and when team orders may come into play. Mercedes have done this before, requiring Bottas to give up victory to Hamilton at Sochi in 2018, while he was still mathematically in contention to win the title. This can be crushing for a driver – Bottas recently admitted he considered quitting F1 after that call.

The unforeseen is always a possibility in Formula 1, and even more so in these strange times. That said, Verstappen has already been vaccinated against Covid-19, Hamilton caught it last year and antibodies should shield him from reinfection any time soon, so the possibility either might have to miss a race for that reason is low.

Other disruptions are possible. The rules changes which gave Red Bull the opportunity to close on Mercedes were prompted by tyre failures. Both drivers suffered them last year – Hamilton at Silverstone, Verstappen at Imola, scene of the next race.

Most unusually, there is even the possibility F1 will change the rules after the season has started. Extra points-paying Sprint Qualifying races are expected to be introduced at three rounds once the teams have thrashed out the financial and sporting details. That promises to be a bonus for whichever team has the fastest car at the chosen rounds.

As one such race is planned for round 20 in Brazil, the championship could even be decided in a Sprint Qualifying race, if either driver has enough of an advantage by then.

But for most if not all in the sport – the contenders included – the prospect of a long title fight is one we can relish and seriously entertain at this early stage in proceedings.

“I’m super excited and super happy for the fans, that they are excited,” said Hamilton. “I think it’s something that all the fans have wanted for a long time.

“Of course, this is only one race, so we don’t know what the future holds. With the pace [Red Bull] have, they could be ahead a lot more, but we’re going to work as hard as we can to try and stay close in this battle and I hope for many more of these sorts of races with Max and Valtteri. There’s a long way to go.”

60 comments on “Analysis: Five factors will decide how close this title fight is going to be”