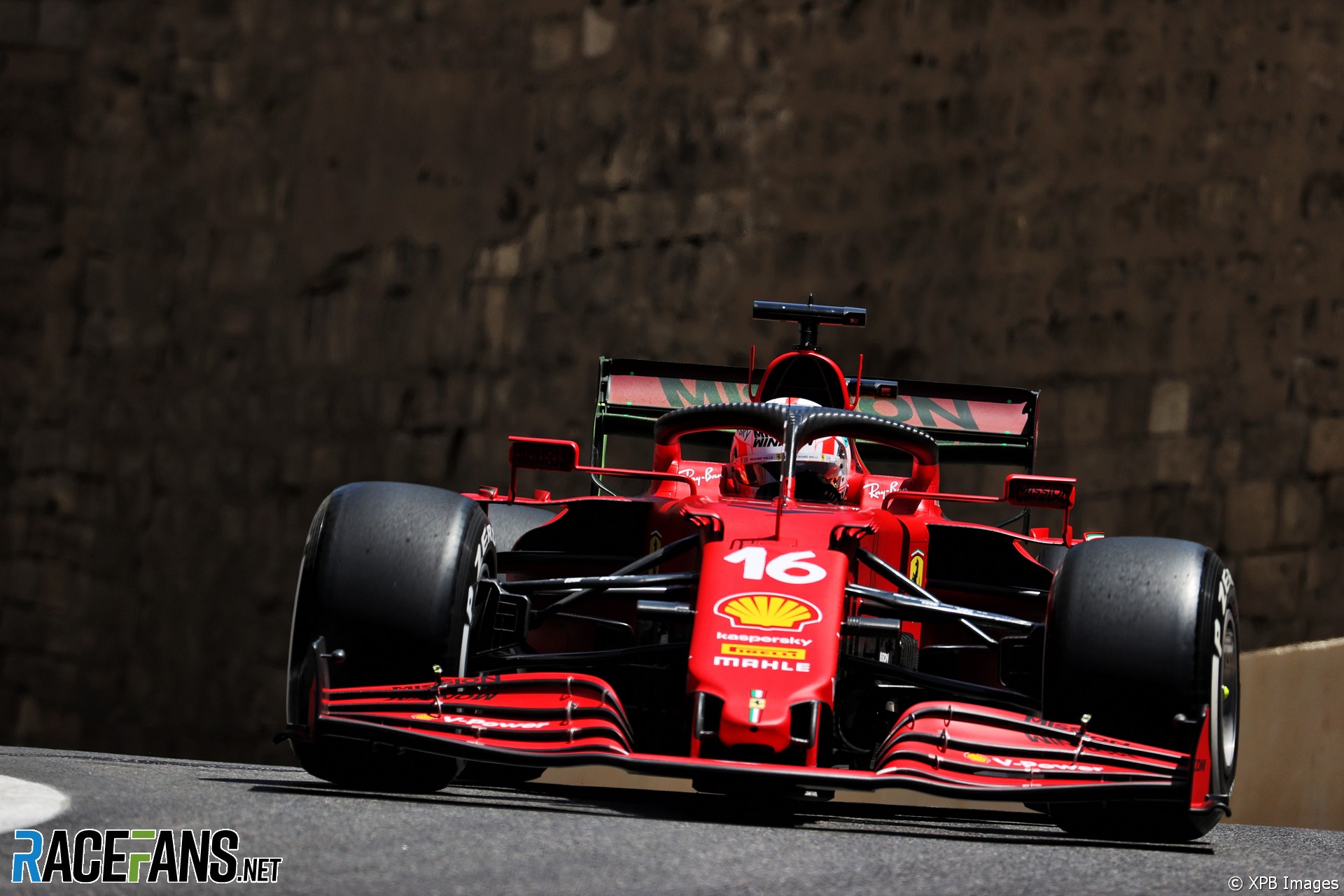 Charles Leclerc and Ferrari achieved an unexpected sequel to their Monaco Grand Prix pole position after a red-flag disrupted qualifying session in Azerbaijan.

But their chasing rivals – notably Red Bull and Lewis Hamilton’s Mercedes – have the long-run pace advantage.

Unlike in Monaco, Leclerc has a much better chance of actually starting the race at the front of the field, not having crashed his car on Saturday, a feat which distinguished him from several of his peers. However, he noted after qualifying that it was going to be hard to stay at the front, with overtaking extremely possible in Baku.

Red Bull perhaps should have been the pole sitters, having shown serious pace over Friday’s practice sessions. But from the moment Max Verstappen smacked the turn 15 barrier on Saturday morning, the day seemed to get away from them.

Mercedes will be looking at the starting grid with some relief, Hamilton having contrived to stick his W12 on the front row. The team’s line has been that their pace over a stint is considerably better than a single lap.

But while they and Red Bull may be faster than Ferrari on high fuel, McLaren and AlphaTauri also look likely to have a say in how this one unfolds.

After qualifying, Pierre Gasly noted that there was “nothing to Max” in their final times. The AlphaTauri driver might have been surprised to top third practice and to find himself battling for pole position in Q3, but he was quick to catch on that his team had shrunk the deficit to sister squad Red Bull.

Speaking before the penalty which dropped him from sixth to ninth, Norris expected McLaren would fare better against Hamilton’s Mercedes than the Ferraris.

“The Ferrari is on pole,” he said, “they’re quicker than us.”

“Hamilton definitely seems maybe a bit more within our reach,” Norris added, “but the Red Bulls are quicker, they have been all weekend. I think we’re third or fourth quickest but there was more potential for us today.”

The Mercedes-powered McLaren compared well against the factory team’s times earlier in the weekend. Both McLarens were ahead of Valtteri Bottas in final practice, the Mercedes driver having such a disappointing weekend that trackside engineering director Andrew Shovlin said the team would need to “pick through his car” to try and find the root cause of a total lack of grip.

Hamilton grabbed second place on the grid with some luck, along with well-timed lap with a good tow from Bottas, while using a different rear wing to his team mate. Although Norris did set a lap faster than either Mercedes during third practice, it’s likely he would have been able to beat his time if Q3 hadn’t been red-flagged during the final runs.

At the point the session was neutralised, after only one corner, Norris was already a tenth up on his sixth-placed time and was running on fresh tyres, rather than the used soft set he had set his original time on. Norris’ penalty for red flag procedure violation has undoubtedly given Mercedes a bit of breathing space, pushing him back to ninth.

Saturday’s qualifying session was run roughly over the same time period as the race – thanks to the forty minutes it took to get through Q1 – and showed quite how significant track evolution can be around Baku. Expect more of the same on Sunday, when the race is forecast to be dry.

The race starts at 16:00 local time, by which time the afternoon heat will have begun to subside and the buildings surrounding Baku City Circuit are already beginning to cast long shadows. The wind will also be a major factor; the two points on the track most vulnerable to drivers being caught by sudden gusts are turns three and 15, where breaks in the buildings mean sudden direction changes can catch them out.

The wind direction graph across qualifying looked like someone has shaking a seismograph, swinging virtually every possible compass orientation and never staying in one for very long, which when drivers are trying to manage fuel and tyres over a race distance could cause issues.

However Nicholas Latifi – driving the notably wind-sensitive Williams – said Saturday’s conditions were a considerable improvement on Friday’s running. “The wind has died down a bit today, but even yesterday, it was a bit of a non-issue really,” he said on Saturday. “I guess on the city tracks it kind of blocks out the wind and kind of have a bit of shelter from it.”

As the Monaco Grand Prix showed Safety Car periods are not entirely inevitable at street circuits. And as we have seen in previous events at this track, just because practice and qualifying sessions see a series of red flags does not mean the race will similarly be disrupted.

Formula 2’s 21-lap second sprint race had three safety car periods over its first nine laps, each restart tending to prompt another neutralisation. As shadows lengthened, drivers were unable to keep their brakes or tyres warm.

“It was quite hard to keep the brakes [warm] because the Safety Car is not fast enough to warm up the carbon brakes,” explained David Beckmann, who finished second.

The position of the Safety Car line presents another complication at restarts. If the lead driver leaves the restart late then there is little chance for those behind to plan into the hard braking zone at turn one, which saw attrition at each F2 restart.

F1 drivers are known to pay attention to the tactics used by F2 drivers and will no doubt have spotted the differences in approach from Beckmann and winner Juri Vips. Beckmann, in the lead after the second Safety Car, waited late and found himself almost instant prey to Vips. When the latter led the third restart he wasted no time in getting the race restarted as soon as he could, catching his rivals unaware and speeding away quickly.

Can Leclerc turn a surprise pole position into a surprise win? Who will be the strongest rival to the Ferrari in Baku?