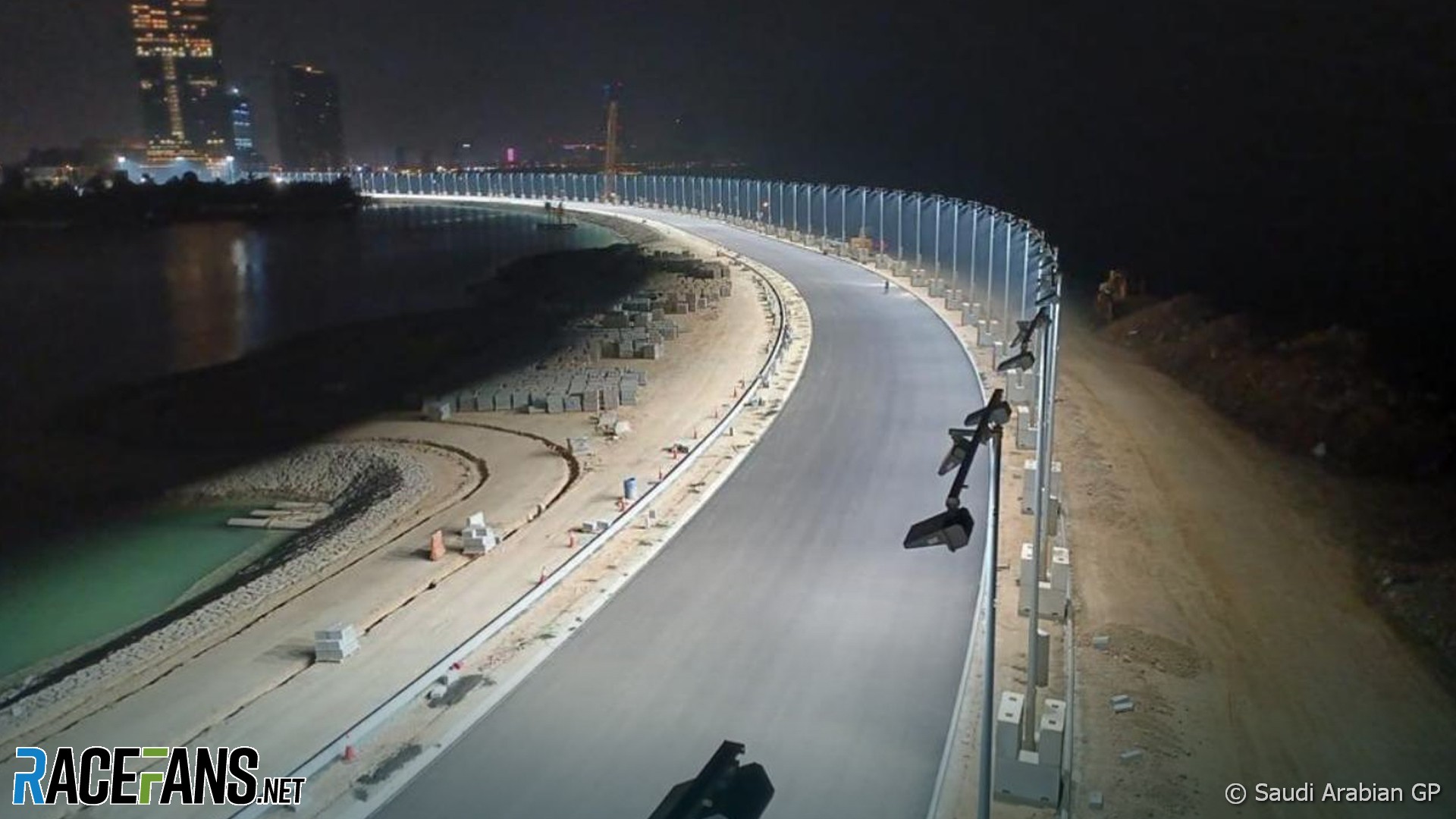 In the round-up: The Saudi Arabian Grand Prix promoters have revealed new images showing the extent of the construction work in Jeddah.

With 50 days to go until the first Saudi Arabian Grand Prix, which will be the penultimate round of the world championship, the promoters have revealed new images of the Jeddah Corniche Circuit under construction in the country’s second-largest city.

The 27-turn, 6.175 kilometre circuit will be one of the longest F1 races on and is being billed as its fastest street track. The image above shows turn 26, which will be one of the quickest points on the track. It leads into the final corner, which drivers are expected to reach 322kph (200mph) before braking.

The track is fully floodlight and the race will be held at night under lights.

George Russell says the rain which has fallen in recent races has highlighted a weakness in the performance of his FW43B. The Williams driver said the car isn’t competitive in intermediate weather conditions.

“If you push too much, the wear of the tyre increases and then when you get to the wetter parts of the track you just don’t have grip,” Russell explained after Sunday’s Turkish Grand Prix. “But when we came back out with new tyres on they didn’t really seem to switch on either.

“The tread’s so much more [that] on drier parts of the track they weren’t suitable either. You’re threading the needed. It’s been twice now we’ve been in these conditions, we’ve struggled both times.

“We normally excel when it’s either wet conditions or slicks than damp conditions. This intermediate phase we need to have a bit of a think about.”

Former Mercedes F1 CEO Nick Fry has joined technology company McLaren Applied. The company was part of the McLaren Group, along with the F1 team, until August when it was sold to Greybull Capital. RaceFans understands McLaren Applied is planning a change of name.

If @ColtonHerta gets the call:

Go f*cking do it, and embrace the wild & unique consequences either way.

AGPC boss Andrew Westacott confident 2022 race will go ahead, amid reports event could be lost for good (Wide World of Sports)

"'We're committed to the Australian Grand Prix and with vaccination rates rising daily, we look forward to hosting a successful race at Albert Park in 2022' a government spokesperson said in a statement."

"HWA Racelab has announced it will leave Formula 2 at the end of this season, with Van Amersfoort Racing anticipated to take its place."

"'They didn’t say much (other than), ‘Yeah, it was a good day,’' the amused Kirkwood said. 'So, that to me was positive. Sometimes no news is good news.'"

This is how Formula 1 teams fight off cyberattacks (ZDNet)

"In terms of volume of attacks, they've definitely got smarter. They're targeting individuals with phishing and spear-phishing attacks – it's very targeted, very clever."

Could F1 solve its sprint race headache by separating it from the championship entirely?

They want extra races during grand prix weekends, fine. Just make it so it’s separate from Sunday’s race and has no implication on either drivers or constructors championships.

I’d be all for having a separate sprint championship, only for constructors. They should make it so that a single driver could not participate in more than a third of sprint races (four out of six), to force teams to occasionally use their third or reserve drivers.

We always complain that their is only so many spots available in Formula 1, and so few opportunities for young or reserve drivers to drive a current-generation F1 car. Well, that checks all the boxes in my opinion.
@Maimai

Happy birthday to Fer No. 65, Sebastiaan Huizinga and Carlos!