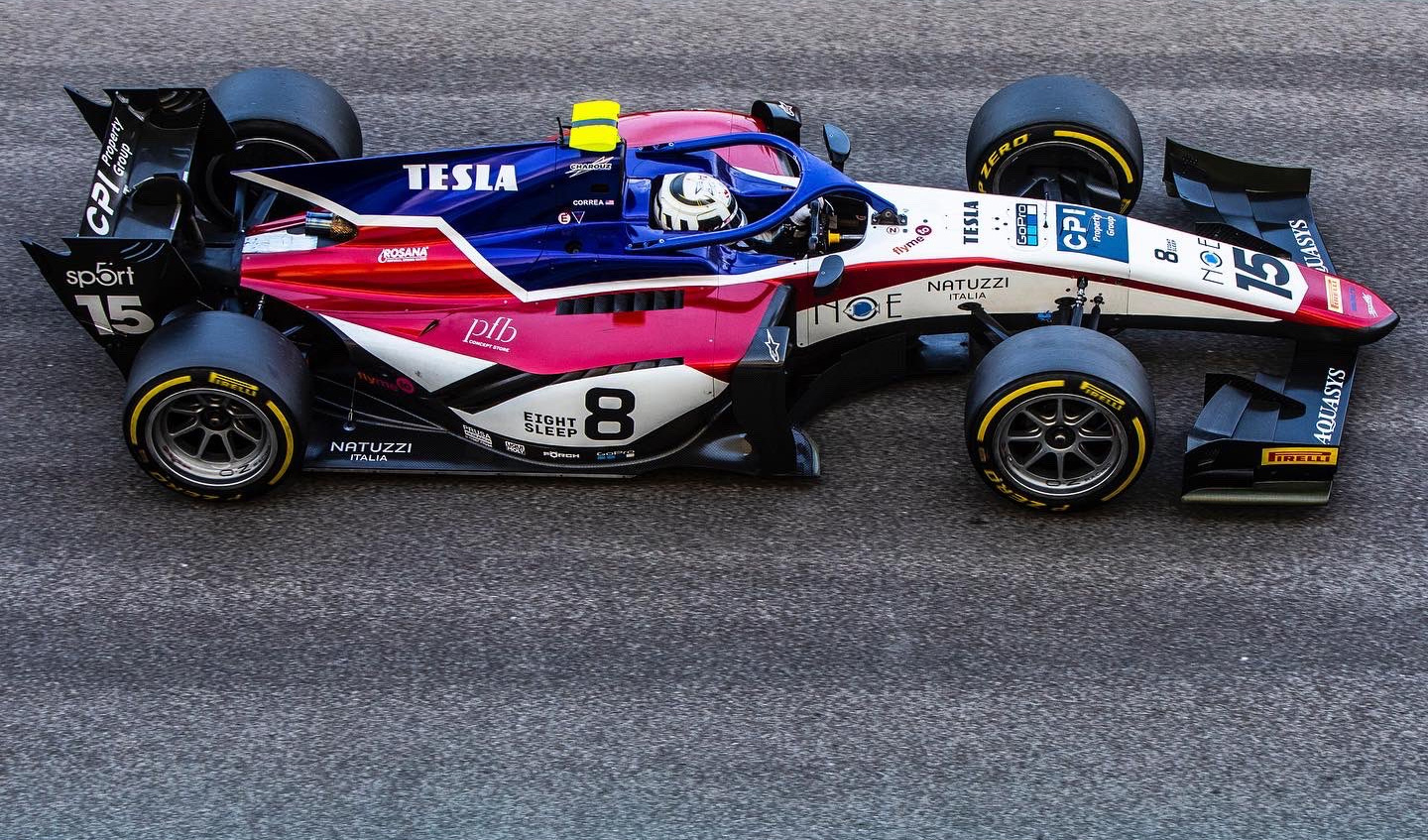 In the round-up: Juan Manuel Correa took part in an official Formula 2 test for the first time since he sustained serious injuries in the F2 crash in Spa that claimed the life of Anthoine Hubert.

Juan Manuel Correa took part in the opening day of the Formula 2 post-season test in Abu Dhabi – his first outing in an F2 car since the horrific F2 crash at spa that claimed the life of Anthoine Hubert.

Driving for the Charouz team, which he raced for in 2019 under the name of ‘Sauber Junior Team’, Correa posted the 14th best time of the day out of 22 drivers, covering 71 laps over the two sessions.

Correa has not announced his racing plans for the 2022 season. He raced in this year’s FIA Formula 3 championship, finishing in 21st place in the standings on 11 points.

“It felt very special to be back behind the wheel of a Formula 2 car today,” said Correa. “Days like today remind me of how lucky I am to be here and continue to live these experiences. As always, but [e]specially today, thinking of Anthoine and his family.”

Jehan Daruvala topped the combined times from the day’s running for Prema, ahead of Felipe Drugovich and Jack Doohan, who compete in his first full season of F2 next year with Virtuosi.

Ferrari have confirmed that Charles Leclerc has tested positive for Covid and is self-isolating at his home in Monaco.

On a post to social media, Ferrari announced that Leclerc had tested positive following his return from Abu Dhabi.

“He is currently feeling fine, with mild symptoms and will self-isolate at home,” said Ferrari.

It is the second time this year Leclerc has been forced to go into isolation after testing positive for the virus. The Ferrari driver previously returned a positive test in January.

Jarno Opmeer clinched back-to-back F1 Esports Series Pro championships at the final round of the season yesterday. The Mercedes Esports driver secured the title by eight points from Red Bull Esports rival Frederik Rasmussen, after the latter won a dramatic final race after taking the lead from Aston Martin Esports’s Luca Blakeley on the penultimate lap.

Despite the best effort’s of Rasmussen’s team mate Marcel Kiefer to bunch up the field, Opmeer’s fourth place finish – inherited after penalties for drivers ahead – was enough for him to be crowned champion for the second year in a row.

🏆 #FIAPrizeGiving2021 – The #FIAActionoftheYear award, voted by motor sport fans via social media, celebrates the most spectacular actions from across FIA Championships throughout the year. Thank you for that unforgettable moment @alo_official @F1 🇪🇸 pic.twitter.com/CrZlVq2wEr

Outside the FIA Gala in Paris, one hour ago. #FIAPrizeGiving2021 pic.twitter.com/WN1Iqml2Qx

A message to parliament from @zacalsopp on the farcical end of the #AbuDhabiGP and Hamilton missing out on the title 😂 pic.twitter.com/R9ynQYyMTm

A special moment, as @Max33Verstappen gets his hands on the F1 Drivers' World Championship trophy 🏆#F1 #FIAPrizeGiving2021 pic.twitter.com/RlBMrMbZ32

‘It was for the TV of course’: How Netflix changed Formula One (The Age)

"Good television? Undoubtedly. Between pay provider Sky Sports and free-to-air Channel 4 in the UK, 7.4 million Hamilton-supporting Britons were glued to their screens – 60 per cent of the Sunday afternoon audience. In the Netherlands, nearly five million viewers – of a population of 17 million – watched the race."

"'I told him that my mum loved him and that she was having her third cancer operation the following day. So he signed my paddock pass 'God Bless Jean. I hope your operation goes well.'"

After Mercedes and Lewis Hamilton did not attend the FIA prize giving gala in Paris as they are obliged to under FIA sporting regulations, @j4k3 notices a familiar quirk in the wording of the rules…

I believe the reg says that “any driver who finishes in the top three must attend the gala”. As we know, any doesn’t mean all.
@j4k3