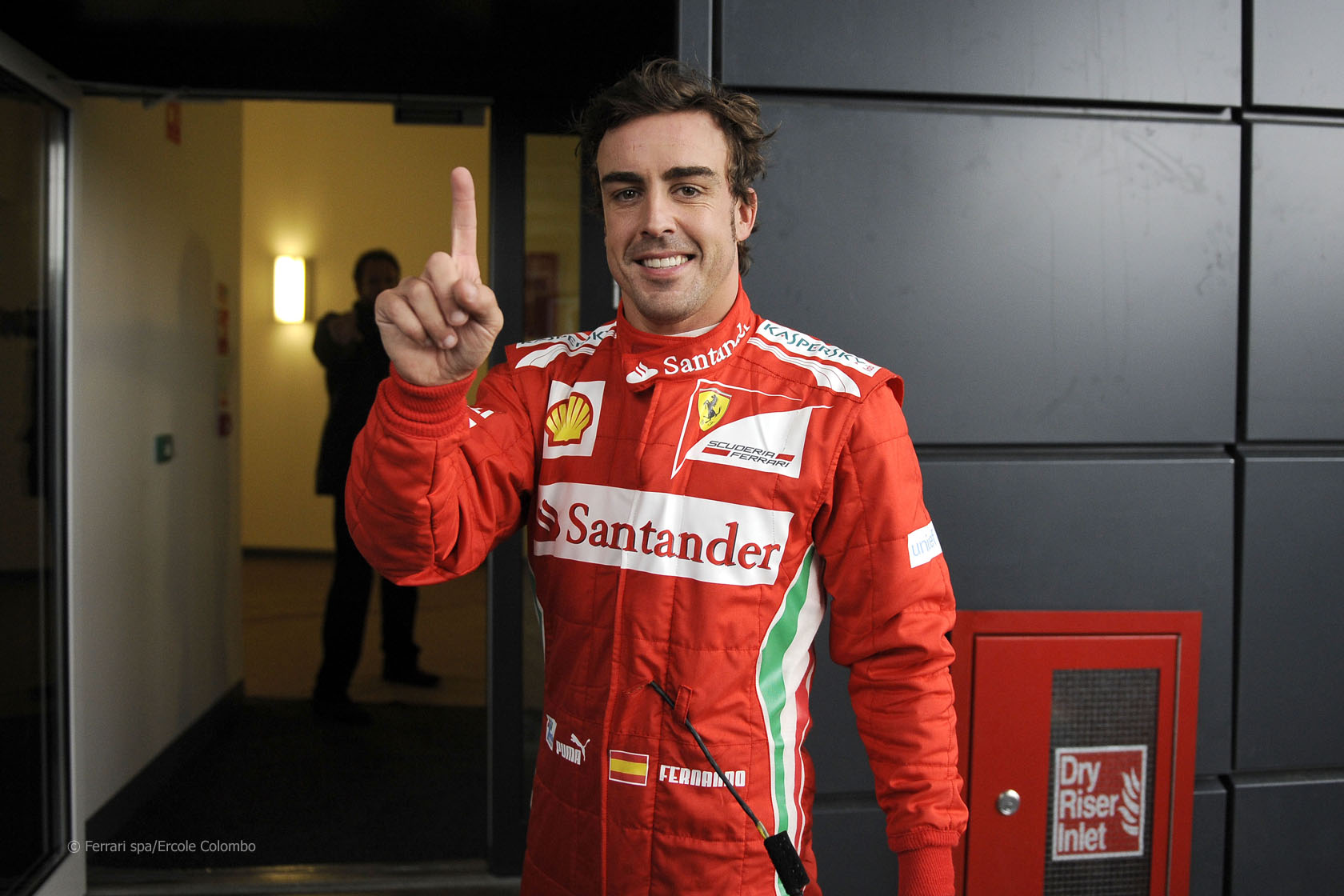 Fernando Alonso came perilously close to being eliminated during the second part of qualifying for the British Grand Prix.

But after a lengthy rain delay he returned to the track in time to claim a place in the final ten – despite a close call on a yellow flag.

He edged Mark Webber by less than five-hundredths of a second to claim his first pole position since Singapore 2010.

Rain had begun to fall before Q1 started so a string of cars were lined up at the exit of the pits waiting for the green light.

When it began, Kamui Kobayashi led them out and set the quickest time while others grappled with traffic. Kimi Raikkonen had to take avoiding action and drive off the track while trying to overtake team mate Romain Grosjean.

The rain soon eased leaving all the drivers on-track gradually improving their times on the intermediate tyres. But there was a sting in the tail: the rain returned at the end of the session, forcing some to make extra runs.

They included the two McLaren drivers, who queued up in the pits for a second set of intermediate tyres with two-and-a-half minutes to go. Lewis Hamilton set the fastest middle sector time but was unable to improve on 14th.

But it was worse for his team mate: Jenson Button was on course to improve before he reached the slippery final sector. But the track had caught out Timo Glock, who spun at the start/finish straight, bringing out the yellow flags. That left Button 18th and out of qualifying.

“I can normally drive a racing car in the wet but not today,” he rued afterwards, adding that at least he had a supply of fresher tyres for the race.

By the time the second part of qualifying had begun the rain had worsened. Once again all the cars were queued up at the exit of the pit lane, only this time with full wet weather tyres on.

There were three significant exceptions – the Ferrari pair and Bruno Senna left the pits on intermediate tyres and instantly regretted the decision. They tip-toed around as the rain hammered down before returning to the pits for full wet tyres.

The damage was already done, however. After the likes of Sergio Perez and Lewis Hamilton scraped in sub-two minute laps, Alonso and Massa found it difficult just to keep their cars on the track.

Alonso caught a lurid slide at the exit of Chapel, narrowly missing the barriers. Massa also went off and Schumacher had multiple off-track excursions. With not just Alonso, but also Hamilton saying the conditions were too dangerous, the session was red-flagged.

It took over an hour and a half for the session to be restarted. When it did, most of the cars resumed on wet-weather tyres.

Sergio Perez was one driver who stuck with intermediates for the restart. It cost him dearly. Having sat at the top of the times during the suspension he ended up 17th and slowest.

A late effort by Paul di Resta put him ninth and when Romain Grosjean spun at Vale it looked like the Force India driver was safe.

But late improvements by Alonso and Vettel dropped him out of the final ten. Replays showed Alonso had passed through the yellow flag sector on his best lap, but it remains to be seen whether the stewards will agree he slowed sufficiently.

As the track continued to dry out the top ten shootout was conducted with most drivers on intermediate tyres.

Hamilton started the session on wets but quickly switched them for intermediates. But he never seemed to have the pace to challenge for pole position and was fighting the McLaren around ever millimetre of Silverstone tarmac.

While he headed for the pits Mark Webber and Alonso took over the contest for pole position. Alonso claimed the fastest time back with his last effort but in the meantime Webber was charging into the final sector.

Webber crossed the line less than five-hundredths of a second slower than the Ferrari. He later told his team he’d been held up “by Di Resta” – presumably having mistaken Nico Hulkenberg for the other Force India.

Schumacher got his intermediate tyres up to temperature quickly enough to qualify where he finished the last race – third. Vettel, who was also on course for a quick lap before losing time in the final sector, took fourth.

132 comments on “Alonso rides his luck for Silverstone pole position”