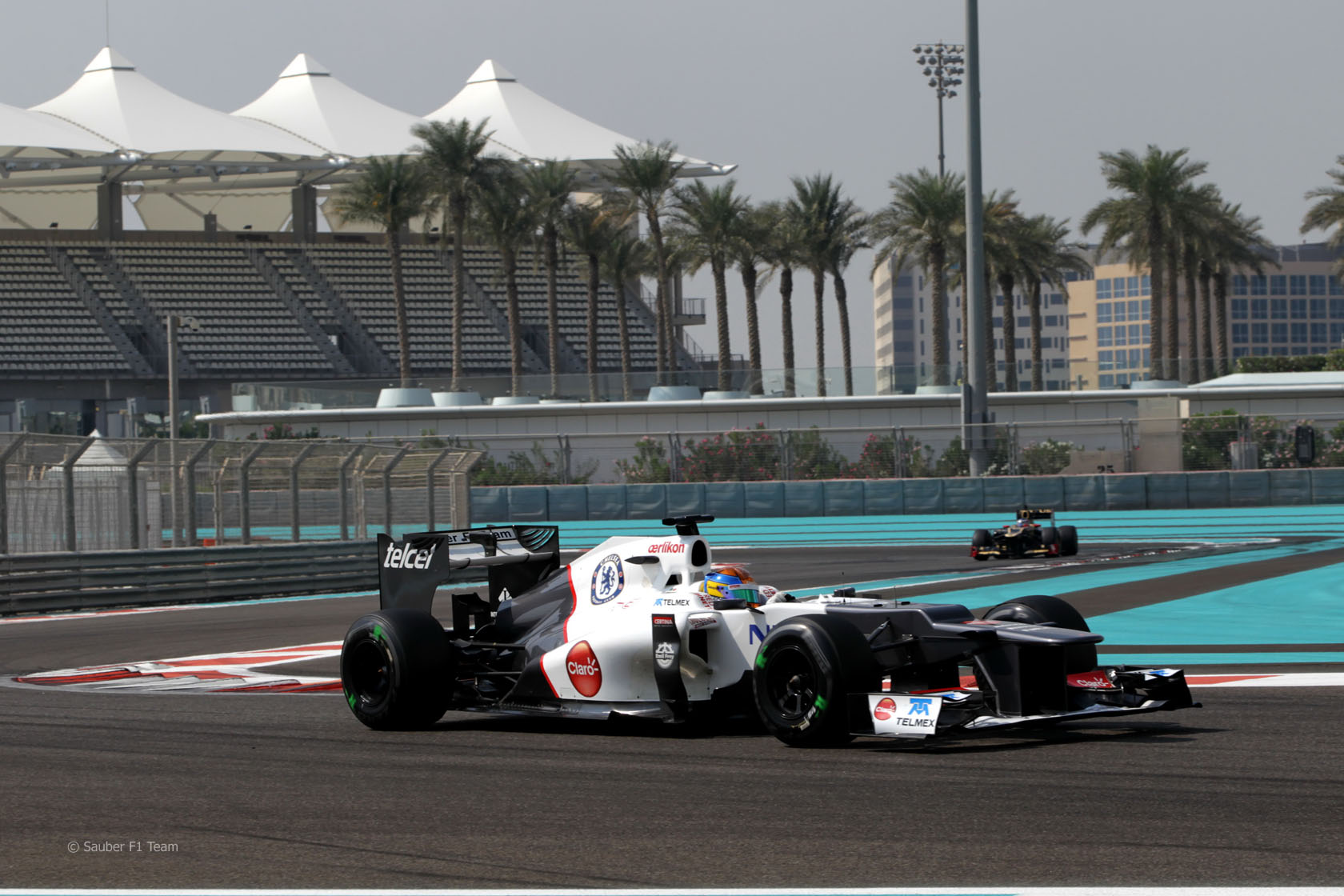 With Michael Schumacher on his way out of F1 a space has opened for a driver who isn’t currently on the grid.

There’s no shortage of talent out there looking for an opportunity. But in tough financial times sheer ability may need a bit of cash to go with it.

F1’s Young Driver Tests ended in Abu Dhabi yesterday and several of the top racers from championships such as GP2 and Formula Renault 3.5 were in attendance.

But who will claim a place on the 2013 grid? Here are 20 drivers who’ve impressed in the leading feeder series recently: Valsecchi took the DAMS GP2 seat vacated by outgoing champion Romain Grosjean and delivered the title himself. But it took the five-year veteran of the category until the final weekend in Singapore to do it, and a tally of four wins (three at the same track) from 24 races showed it was not an emphatic triumph.

Still he got the job done, and few are the drivers who’ve finished in the top two in GP2 and not progressed to F1. Worryingly for Valsecchi, the only two who have are fellow Italians Giorgio Pantano (in 2008) and Luca Filippi (last year).

Valsecchi might not be the third – he is known to F1 teams having tested for HRT in 2010, Lotus (now Caterham) in 2011 and the other Lotus this year. But as with so many drivers at this level he’s likely to require a budget to progress further.

Razia led much of this year’s GP2 championship, only to falter in the final rounds and end up second-best to Valsecchi.

He drove in two first practice sessions last year and has already made Young Drivers’ Test appearances for Force India (at Magny-Cours) and Toro Rosso (at Yas Marina). The latter declared themselves happy with his progress but with two drivers already confirmed for next year and a third waiting in line (see below) there’s no room for Razia there. This is despite a somewhat disappointing second season of GP2 this year. Gutierrez gave Jules Bianchi a run for his money at ART in 2011 but this year rookie team mate James Calado often outshone him, and the pressure that brought seemed to provoke over-driving.

Max Chilton didn’t place higher than ninth during his first season of GP2 last year, but showed considerable progress in 2012. He began the year as a regular visitor to the points, and although that tailed off on he did land a pair of feature race wins.

This timely success and the backing of insurance company Aon (who his father Grahame sits on the board of) may help him land a seat at Marussia next year, having made his practice debut for them in Abu Dhabi last week. Frijns stepped up from karting to to Formula BMW Europe in 2009, winning a race in his first season. He’s won a championship every year since, starting with the last Formula BMW title in 2010, then Formula Renault 2.0 Eurocup the next year. From there he stepped up to Formula Renault 3.5, with its considerably quicker 2012 machines, and spent most of the year leading that championship.

The title nearly slipped from his grasp after a poor weekend in France. He bounced back in Spain and eventually claimed the championship after a controversial clash with rival Jules Bianchi.

That earned him a test for Red Bull and he also drove for Sauber in Abu Dhabi. Frijns brings little backing but he’s clearly got potential.

Bianchi has probably still not come to terms with losing the Formula Renault 3.5 title to Frijns yet. “I?óÔéĽÔäód be lying if I said that what happened two weeks ago in Barcelona is now all behind me,” he said last week.

He has been a Ferrari test driver for four years and has driven in nine practice sessions for Force India, who have a vacancy at their team for next year. Now is surely the time for Bianchi to make the move up.

Bird joined Bianchi in switching from GP2 to Formula Renault 3.5 this year, which promised quicker cars, F1 tracks to race on and the possibility of dovetailing a race programme with appearances in F1 practice sessions. But unlike Bianchi, Bird hasn’t had that kind of seat time.

It’s easy to overlook that he ended the season just ten points behind Frijns. Bird won brilliantly in Monaco and has tested for Mercedes several times. But it’s hard to see where he might fit into the 2012 F1 driver line-up. But it was in Formula Renault 3.5 that he impressed most, finishing the season fourth overall despite only joining the category at round six. He out-scored Bird, Bianchi and Frijns throughout those races and his last five starts yielded four wins and a second.

Da Costa will surely be the next talent to find himself at the wheel of a Toro Rosso, the question is when? This is the guy Daniel Ricciardo and Jean-Eric Vergne have to be wary of.

Magnussen excelled in qualifying in Formula Renault 3.5 this year but only had one win to show from his efforts – though he also retired while leading in Hungary.

The son of former F1 driver Jan Magnussen is on McLaren’s driver development programme and drove for the team in Abu Dhabi.

Calado was pipped to the GP3 title last year by ART team mate Valtteri Bottas. While Bottas was snapped up by Williams, Calado moved up the ladder to GP2 where he enjoyed almost immediate success, winning in Abu Dhabi at the end of the year.

He won again in the second race of this year, holding off team mate Gutierrez. Calado was a regular fixture at the front of the field and was robbed of a likely win in Valencia by poor strategy.

He slipped from third to fifth in the championship standings over the final four rounds in which he failed to score, partly due to racing while ill in Singapore. Nonetheless Calado was clearly the top rookie in GP2 this year. But where is the interest from F1 teams? Finishing outside the top five in GP2 this year (though level on points with Calado) was a poor return on the experience van der Garde has accumulated at this level.

Nonetheless he has had plenty of F1 track time with Caterham lately and may be in with a shot of landing a seat for next year. He has prior F1 experience too, having tested for Spyker as long ago as 2007.

Could Venezuela have two F1 drivers in the near future? Johnny Cecotto Jnr had a mixed season in GP2 but impressed with a feature race win in Monaco.

He drove for Force India in last year’s Young Driver Test and turned out for Toro Rosso in Abu Dhabi this week. But was this a case of them sizing up a potential talent of the future or tapping into a source of quick cash?

Last year’s British F3 champion had the highly experienced Valsecchi to learn from at DAMS and made clear progress throughout the season: he scored 28 points in the first half of the season and 66 in the second.

Caterham’s American test driver Alexander Rossi had a tough year in Formula Renault 3.5 with Caterham, then was soundly beaten by Da Costa when he arrived. He drove in first practice for the Spanish Grand Prix, appeared at the Abu Dhabi Young Driver Test and has also tested for Caterham’s GP2 squad.

Haryanto tested for Marussia at Silverstone in July. The highlight of his GP2 season was taking pole position in a wet qualifying session at Spa. He ended the year 14th, but he looks like Indonesia’s best prospect for its first Grand Prix driver. Mortara did the double in Macau in 2009 and 2010, but has been racing in the DTM since then. It’s a path used by a few drivers to reach F1, notably Paul di Resta and Christijan Albers, but will it work for him?

In the ten-round series Mortara stood out by being the only driver to win for Audi – twice – ending the year fifth overall. Lotus gave him a test in Abu Dhabi and he admitted: “it was pretty tough – I?óÔéĽÔäóve come from a car which is a lot slower and the first laps were certainly an eye-opener.”

What of last year’s Formula Renault 3.5 champion? Robert Wickens tested for Virgin (now Marussia) at the end of last year but joined Mortara in the DTM. He didn’t enjoy as successful a year with Mercedes, two seventh places the highlight for him.

Still among the ranks of Italy’s upcoming drivers trying to get an F1 break is Luca Filippi. He appeared in the final two GP2 weekends this year and impressed by winning at Monza on his return and claiming pole position in Singapore.

But if it hasn’t happened for him by now you have to wonder if it’s ever going to. IndyCar may be a more likely destination. Last year’s GP3 champion has driven in most first practice sessions for Williams this year, invariably at the expense of Bruno Senna. He is strongly tipped to take over Senna’s race seat next year.

In his 14 practice appearances he’s impressed the team with his speed, outpacing Pastor Maldonado six times.

But is a year out of competition really the best way to prepare for an F1 race seat?

Leimer tested for Sauber last year but wasn’t in action at the Young Driver Tests this year after a somewhat disappointing GP2 season for Racing Engineering with no wins.

Which of these drivers deserves a place on the 2013 grid? Cast your vote below – you can pick as many drivers as you like.

Who else should be considered for a 2013 race seat? What about former F1 drivers such as Jerome D ‘Ambrosio, Jaime Alguersuari, Sebastien Buemi – or even the injured Robert Kubica?