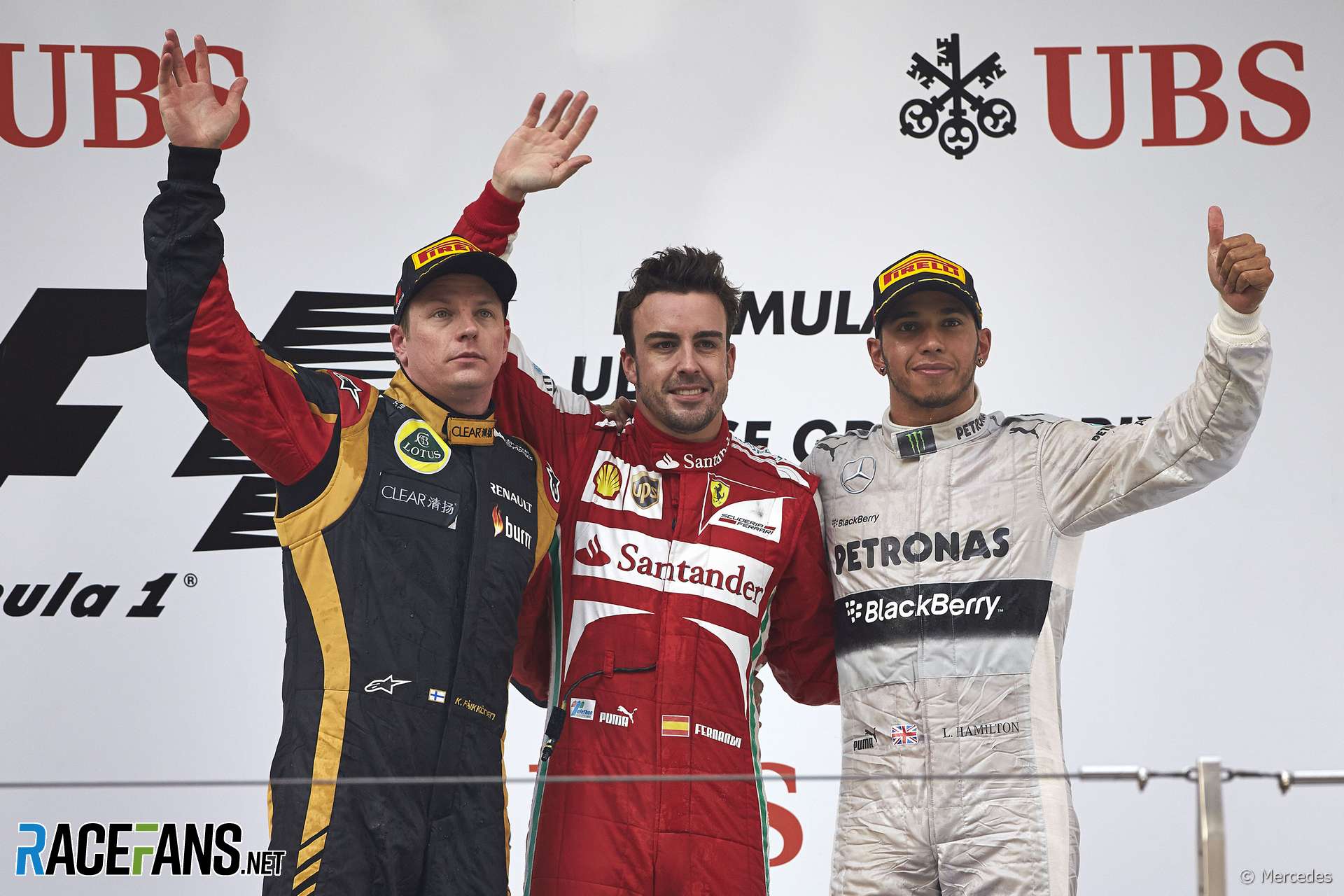 Exciting or artificial? Unpredictable or incomprehensible? Meaningful or meaningless?

Whatever your view about the current generation of Formula One racing – and there are many – there’s no denying we enjoy close competition at the moment. Sebastian Vettel, Kimi Raikkonen, Fernando Alonso, and Lewis Hamilton left the Shanghai International Circuit separated by 12 points at the head of the table.

The third round of the season produced another different winning team and driver. Alonso produced the perfect response to that uncharacteristic slip-up in Malaysia three weeks ago.

The Ferrari driver showed he has mastered the quirks of modern era Formula One as well as anyone. He used the new second DRS zone on the pit straight to take the lead off Hamilton, and decisive work in traffic relieved the strain on his tyres and helped him build a decisive lead.

Raikkonen slips back at the start For the second year in a row it was a Mercedes on pole position. This time it belonged to Hamilton and he duly converted it into the lead, aided by the Lotus of Raikkonen alongside him making a sluggish getaway.

That allowed the two Ferraris to pounce: Alonso took up second behind Hamilton and Felipe Massa followed him, passing Nico Rosberg up his way up from fifth on the grid.

The top seven drivers all started the race on their soft tyres from Q3. But they were wary of the fragility of their rubber, and the opening laps were a tentative affair.

At first it looked as though Massa was shaping up for a move on his team mate. He had a run on the other F138 at the hairpin on the second and third laps but each time he backed out of it. Had he made a move stick, and gained the precious first call on strategy, his day would probably have been far more rewarding.

At the end of lap four Hamilton had both Ferraris attacking him with DRS and the result was inevitable. They both filed past him on the run to turn one.

Both Mercedes were already in tyre trouble – Rosberg was overtaken by Nico Hulkenberg and Sebastian Vettel on the same lap. In a bold move Ross Brawn called both drivers into the pits despite them being separated by just 4.25 seconds.

The pit crew performed the stacked pit stops with impressive composure. Although Rosberg’s cost him almost two seconds more than his team mate’s did, spending another lap on softs would probably have been more detrimental.

Ferrari decided against stacking the stops for their leading drivers as they were separated by little more than a second. That left Massa to toil around for another lap which, at 1’46.9, was over two seconds slower than anything else he did all race.

This left him mired in the midfield. “If anything maybe we should have stopped one lap or two laps earlier,” admitted technical director Pay Fry afterwards. “It’s always difficult when you know all that traffic is there. And that just got him into the traffic which had damaged the front tyres by the time he got through.”

With Massa out of the way the drivers who had started on medium tyres now led. They were headed by Hulkenberg, who had impressively passed Vettel and Jenson Button on lap four, and was being pursued by the pair of them.

Next up were Sergio Perez and Paul di Resta. They had swapped places on the opening lap when the Force India driver got too close to his team mate at the exit of the hairpin, banged wheels with him and bounced onto the grass.

Then came those who’d already made their first stops: Alonso and Hamilton picked their way past Jean-Eric Vergne on lap nine to take sixth and seventh. Raikkonen did likewise two laps later.

This stint decided the battle for the lead. While Alonso picked off Di Resta and Perez on consecutive laps, Hamilton seemed to lack his usual incisiveness in traffic. Team principal Ross Brawn later revealed a chunk of rubber in the W04’s front wing had upset its handling.

That was news to its driver after the race: “If there was, that might be the reason why I had so much understeer,” said Hamilton. By the time he cleared Perez, Alonso was 4.6 seconds up the road. Raikkonen had a little more difficulty passing Perez. He tried to get around the outside of the McLaren on the curving run towards turn six. He’d made a similar move on Hamilton on lap five without success, despite Hamilton giving him room.

Attempting the same with Perez, Raikkonen wasn’t quite as close to the McLaren and Perez stuck to his line. Raikkonen took avoiding action but got onto the grass and swiped the back of the McLaren.

For the second time in as many races Raikkonen got on the radio to condemn the driving standards of a rival for a move the stewards found no fault in: “What the hell he’s doing?” Raikkonen fumed. “He just pushed me off the circuit.”

The news from his team wasn’t good either: “You’ve lost the cascade and have a hole in the nose,” said Mark Slade, adding this too was the “same as last race”. Lotus later put the cost of the damage at a quarter of a second per lap, which made Raikkonen’s subsequent recovery all the more impressive. While the stewards were quick to tick that incident off their list, there was plenty more going on to keep them occupied. On lap five Esteban Gutierrez had missed his braking point at the hairpin and used Sutil’s car instead.

No fewer than three of the incidents up for investigation concerned the luckless Mark Webber. Having started last as per his penalty from Saturday, Webber had ditched his soft tyres at the earliest available opportunity and made rapid inroads into the midfield.

On lap 15 he tried a move on Red Bull stablemate Vergne at turn six – moments before Perez and Raikkonen came to blows at the same spot. It was rather a long-range effort and Webber seemed to put his faith on the Toro Rosso driver having seen him and being prepared to leap out of the way. He hadn’t, and the pair collided.

The front wing on the RB9 was badly damaged so Webber headed back to the pits where the next act in his weekend of misery unfolded. His right-rear wheel was unsuccessfully secured during the stop and it worked loose at the very spot where he’d run out of fuel 24 hours earlier. The wheel carried on without him and briefly considered performing an ironic service to its former master by wandering into the path of his team mate.

Webber was also one of eight drivers who the stewards deemed had used their DRS in a yellow flag zone. Ordinarily DRS is automatically disabled by race control in such circumstances, but a telemetry fault has prevented them from doing that since the start of the season. All the drivers were exonerated under “mitigating circumstances”. Around the same time Hulkenberg headed for the pits followed by Vettel where the pair exchanged positions due to a slow Sauber pit stop. Button, running a two-stop strategy, now assumed the lead which he held until lap 21 when Alonso zapped past him in the DRS zone.

Button followed Alonso into their pits on lap 23 for their first and second stops respectively. Vettel now became the race’s sixth leader. But when race engineer Guillaume Rocquelin got on the radio to tell him not to bother defending the position from Alonso it became clear their focus was on securing as many points as they could on a day when the RB9 was not the class of the field, rather than fighting tooth and nail for victory.

Hamilton continued to slip back from Alonso during their third stint and Raikkonen remained bottled up behind the Mercedes. On lap 34 Lotus decided to force the issue, bringing Raikkonen in for his final pit stop.

This was Lotus wielding the E20’s kindness to its tyres as a weapon. Mercedes baulked at the idea of giving Hamilton a final stint in excess of 20 laps, and when he followed Raikkonen’s lead three laps later he came out behind.

By this time the rubber debris in Hamilton’s front wing had seemingly worked loose. His handling improved and he spent the final stint latched onto Raikkonen’s tail, but unable to find a way back into second.

Hamilton was at least enjoying a better race than his team mate, who had retired for the second time in three Grands Prix. This time the culprit was his rear anti-roll bar which failed after his second pit stop. As the race drew to a close those who started on medium tyres had to confront the need to run the softs. Hulkenberg had done so in his third stint and struggled. To his dismay, when he changed back to the medium tyres he still couldn’t find any pace, so Ricciardo and Grosjean demoted him to tenth.

Button put the softs on with seven laps to go and treated them with kid gloves as there was no realistic chance for him to catch the cars in front. But Vettel went into full attack mode when he made the switch on lap 51. Having emerged from the pits 11.5 seconds behind Hamilton he was just 1.9 seconds behind as they began their final tour three laps later.

As they wound through the infield turns Hamilton was delayed by a lapped car in front of him. Here was Vettel’s chance to get payback for Austin last year – and make it three podiums out of three in 2013.

But Charles Pic stuck to the racing line as Hamilton and Vettel filed around him. The Red Bull driver braked a fraction too late for turn 11, giving Hamilton precious breathing space in the DRS zone on the back straight. The Mercedes came out of the hairpin still ahead and even a hefty lock-up at the last corner wasn’t enough for Vettel to capitalise. Alonso seized his and Ferrari’s first win since Germany last year with Raikkonen over ten seconds in arrears. Hamilton and Vettel crossed the line separated by a fifth of a second.

Behind them Button crossed the line in fifth and urged his team to be pleased with the result. “I don’t think we could expect anything more,” he said on the radio afterwards. “As a team I think we did a fantastic job,” he added, “the pit stops were very good.”

Having nursed his tyres at first Button got his foot down on the final lap, gaining almost two seconds. Sixth-placed Massa had been hoping to take advantage of late tyre trouble for Button but Rob Smedley told him, “he was able to do a 38.0 at the end so obviously he was just scared about the tyres.”

Di Resta survived the rough-housing with his team mate early on to claim eighth ahead of Grosjean and Hulkenberg. Perez struggled with degradation and slumped to eleventh ahead of Vergne and the Williams pair. Valtteri Bottas passed his team mate on the penultimate lap but the two FW35s were over 20 seconds behind the next car.

The race which had begun with three world champions at the head of the field ended with all five in the highest positions. The debate on whether F1 is overloaded with gimmicks will rage on but it isn’t stopping the cream from rising.