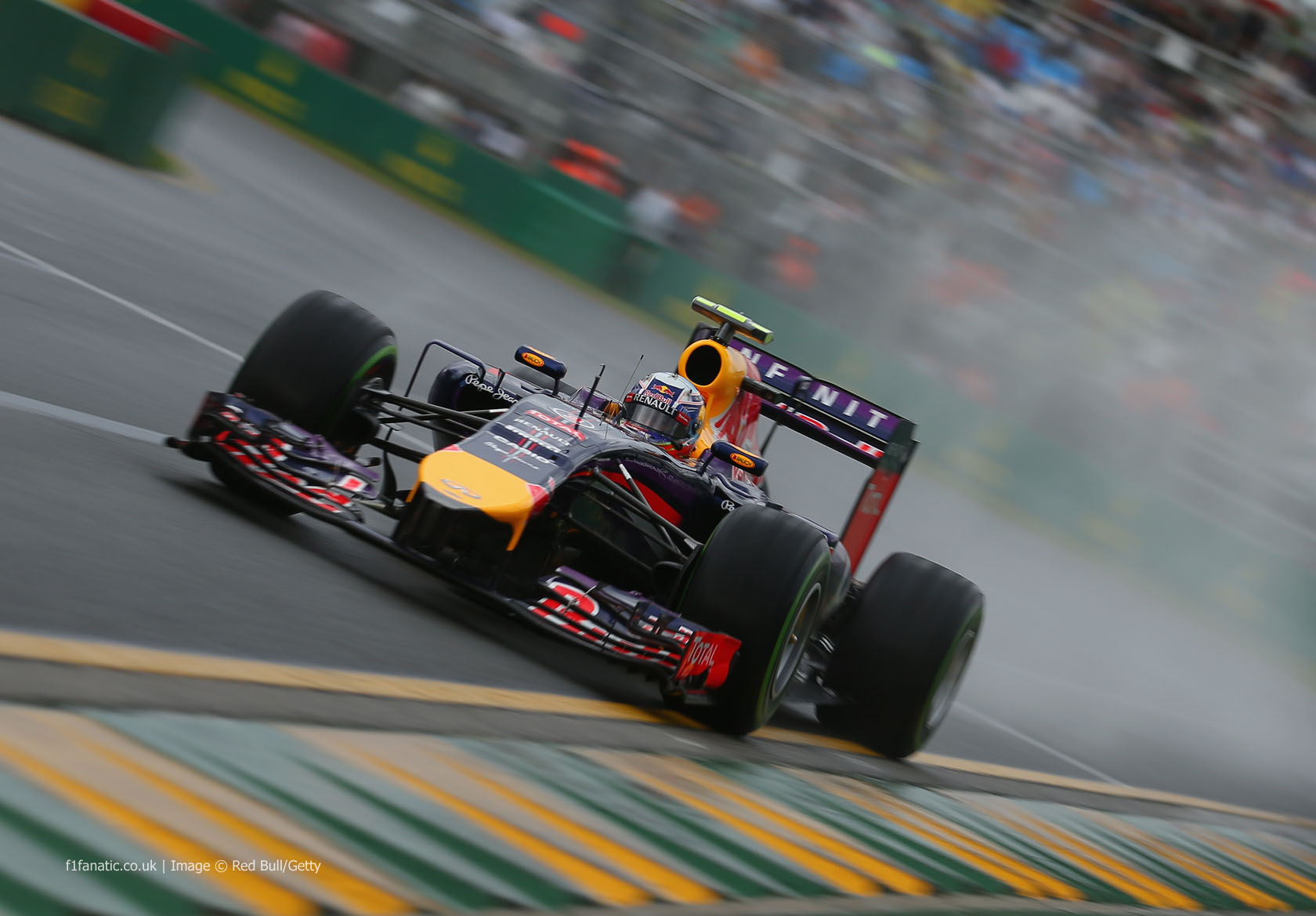 The cars may not make as much noise as they used to but the Melbourne crowd more than made up for that when, for a few fleeting moments, it looked like their home driver was going to get pole position.

The chequered flag was already out in Q3 when Daniel Ricciardo, bravely risking intermediate tyres on a wet track, went fastest in his Red Bull.

But seconds later Lewis Hamilton arrived to spoil the party and give Mercedes the pole position everyone expected them to start the season with.

An action-packed qualifying session saw rain showers, a world champion in the barriers and some impressive rookie performances.

With the track dry but the skies darkening the drivers were eager to take to the track as qualifying began. Some were queued up at the pit lane exit including the two Mercedes drivers.

Nico Rosberg was advised to let Hamilton leave first – the rules state that the first driver to arrive in the queue has priority – and the team also warned him to set a lap quickly as rain was on its way.

It took a little longer to arrive than expected, giving all the drivers the chance to set a time in dry conditions. The only one who failed to take advantage was Pastor Maldonado, though from the difficulty he was having with the Lotus you’d have been forgiven for thinking the track was wet.

Romain Grosjean was also struggling in the other Lotus. Even before the rain arrived the pair looked likely to be the two slowest qualifiers.

Aside from Lotus’s struggles Q3 had a familiar look. Both Marussias failed to make it through – though Max Chilton unusually out-qualified Jules Bianchi – and Marcus Ericsson’s Caterham also failed to progress.

Team mate Kamui Kobayashi, however, bounced back from the team’s dire problems on Friday to take his car into Q2.

Rain was not what most drivers wanted as they contemplated their first qualifying session of the year on a parkland circuit in new cars with brutal power delivery and often unpredictable braking characteristics.

The latter definitely applied at Toro Rosso, whose drivers had struggled with their brakes in practice. Jean-Eric Vergne was particularly apprehensive ahead of Q2.

It turned out he needn’t have been. Remarkably, both Toro Rosso drivers claimed a place in Q3, including rookie Daniil Kvyat.

Both Williams drivers also progressed though Valtteri Bottas found the conditions a handful, sliding off at turn nine and then spinning at turn one – though the latter happened moments after he set fastest time.

With conditions improving rapidly towards the end of the session the timing of the final laps was crucial. While Fernando Alonso took the fastest time in the Ferrari team mate Kimi Raikkonen caught traffic at the end of his lap and could only manage eighth.

His attempt to improve further was scuppered when his car got away from him at turn four. The Ferrari wiped its nose off against the barrier and with most of the other drivers already ahead of him and on their last laps, Raikkonen was doomed to elimination.

He wasn’t the only world champion to miss the cut. Jenson Button, three times a winner at the Melbourne track, was also knocked out – though his team initially misinformed him that he’d made it into Q3.

But the biggest surprise was Sebastian Vettel. While team mate Ricciardo frequently popped up near the top of the times the reigning world champion could only manage 13th.

Further rain fell as the extended 12-minute Q3 shoot-out began, leading most drivers to take to the track on wet weather tyres. Alonso was an exception: he started the session on intermediates but switched to wet weather tyres for his final run.

But Alonso didn’t figure in the fight for pole position. That was conducted between the Mercedes drivers as expected and – surprisingly – Ricciardo’s Red Bull. He put intermediate tyres on for his final run, indicating the Red Bull wants for nothing in the area of downforce.

Rosberg went off at turn nine shortly after beginning his first run. The time lost hear would cost him later – he completed his final lap moments after the chequered flag came out, while Ricciardo and Hamilton had just begun their final runs on an improving track.

Massa’s Williams nearly got away from him on the curved run to turn ten. But the same area caught out Daniil Kvyat who clipped the barrier in his Toro Rosso. Fortunately for his rivals, the yellow flags were not needed.

Ricciardo hesitated slightly at the final corner, feeling a strange sensation at the front of the car which he thought might be related to debris, but when he crossed the line and took the fastest time off Rosberg the crowd went crazy.

They were subdued somewhat by Hamilton’s subsequent improvement, which denied Ricciardo his pole position, but a front row start for the Red Bull driver was beyond the team’s expectations heading into the weekend.

Kevin Magnussen also stood out on his debut for McLaren, claiming fourth on the grid having been their only representative in Q3.