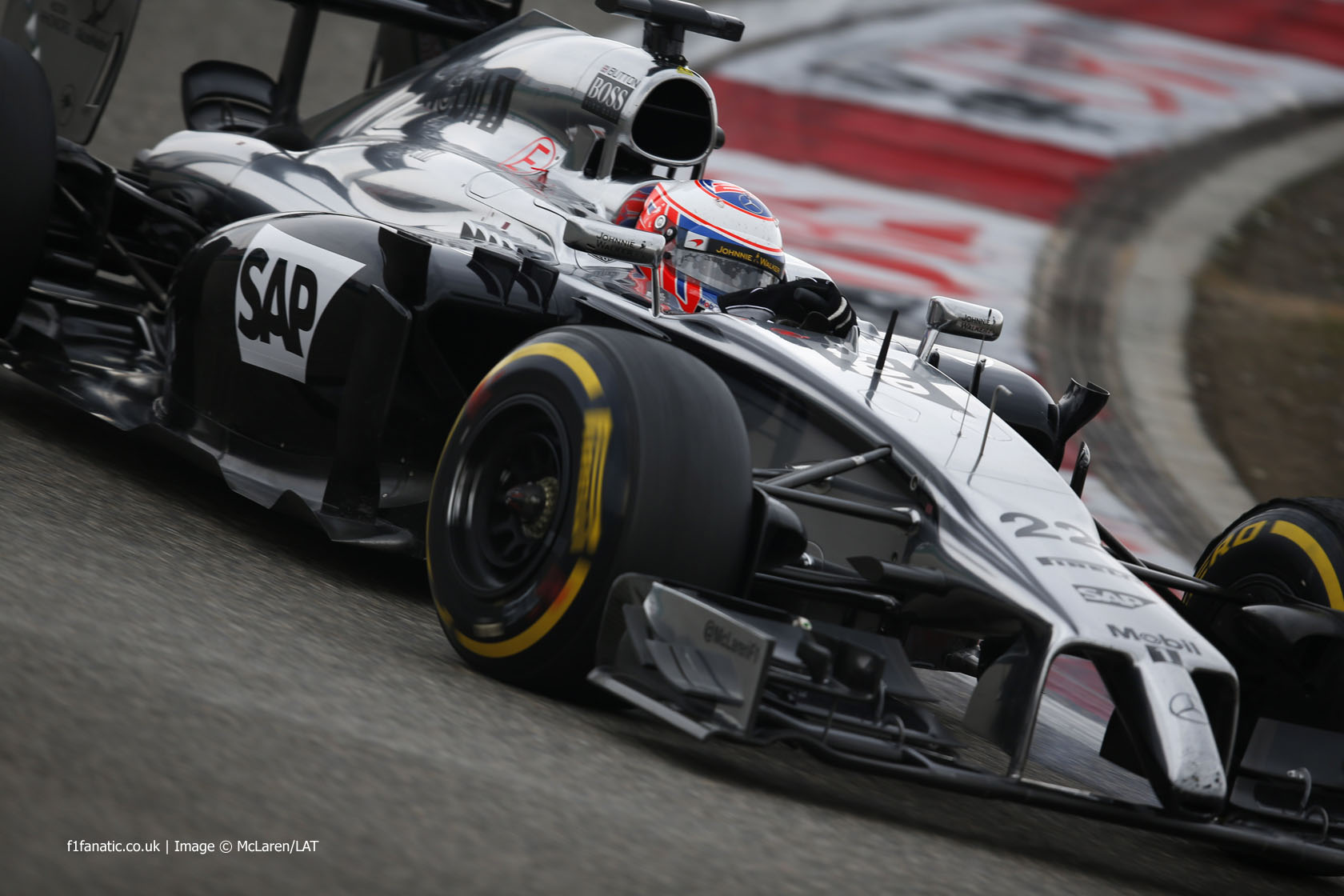 In the round-up: After both McLarens finished outside the points and a lap down in China Jenson Button says the team’s performance “isn’t good enough”.

“When you have as bad a result as this it’s tough for everyone. Hopefully the team can stay positive and update the car because this isn’t good enough.”

“My view is that it’s probably more to do with driving style, plus the weather with the cold conditions and not getting the tyres working. Obviously if there was some issue then we would not be fast or happy with the new tyres, so I think it’s a combination of cold conditions, the circuit layout and my driving style.”

“I think this podium should be dedicated to Stefano [Domenicali], as everything we do up to July will also be the result of his efforts.”

Christian Horner: “Sebastian is having a tough time at the moment…” (Adam Cooper’s F1 Blog)

“He’s tremendously sensitive to certain aspects of the set-up, and he’s not getting the feedback from the car that he wants. And then the compound effect of that is that he’s damaging the tyre more.”

“Although the court will sit for just two days a week, Ecclestone will rely on Sacha Woodward-Hill, his chief legal officer who is little-known beyond the terraced walls of his offices in Kensington.”

‘Red Bull should reach out’ (Sky)

Horner: Fallows made his own decision (James Allen)

“Dan [Fallows] decided that he was going to leave Red Bull for reasons of his own but with the changes that have happened at McLaren he decided that he didn’t want to join, and it was 100 per cent his choice to approach us and see if there was a situation still open. So it was his choice.”

“Felipe Massa’s disastrous pit stop, which cost him a likely sixth place finish in the Chinese Grand Prix, was caused by the team attempting to fit the replacement rear wheels to the wrong side of the car.”

“Ferrari introduced a new front axle and brake duct assembly in Shanghai that bleeds airflow from the brake cooling duct through a duct in the centre of the axle.”

“[Father Jan] asks questions, because he’s been out of Formula One for a long time. He has a lot of questions for me. A lot of stuff has changed and a lot of that he doesn’t know about. He’s learning as well. He’s very interested in what’s going on.”

F1 should be all about the noise (The Telegraph)

“Fundamentally, this is a question about what sport should sound like. So much of the intangible emotion generated by sport is bound up in its acoustics, and as F1 is swiftly discovering, you tamper with them at your peril.”

@f1enigma There's an error in the article. It says BE could be removed by EC law if he pays a fine. This isn't true as he's just an employee

Ferrari have added a blown front axle this weekend, aiding the outwash created by the front wing pic.twitter.com/q0Djaa63zw

This little old lady tried to push us out of the way at the turn 1 photo tower today in #Shanghai #F1 #brilliant pic.twitter.com/ND8BAziaZu

The flag snafu (http://t.co/n0EfWmCAMi) is not unprecedented by the way. It also happened at the 1985 British Grand Prix at Silverstone. #F1

1st day racing in my new job, teammates made my bit easy!! On the podium, take that all day long. pic.twitter.com/2beI4zJV7R

Is anyone going to beat Mercedes this year?

Could Mercedes be the first team to win every race in a season? They’re so far ahead that they’re not even racing at 100%

Hamilton’s fuel usage was lower than anyone else in the top ten, so there must’ve been bags more pace in that car if he had had to push harder.
Alex McFarlane

Happy birthday to Vincent and The Kef!

On this day last year Sebastian Vettel won the Bahrain Grand Prix, followed by the two Lotus drivers in a recreation of the previous season’s result.